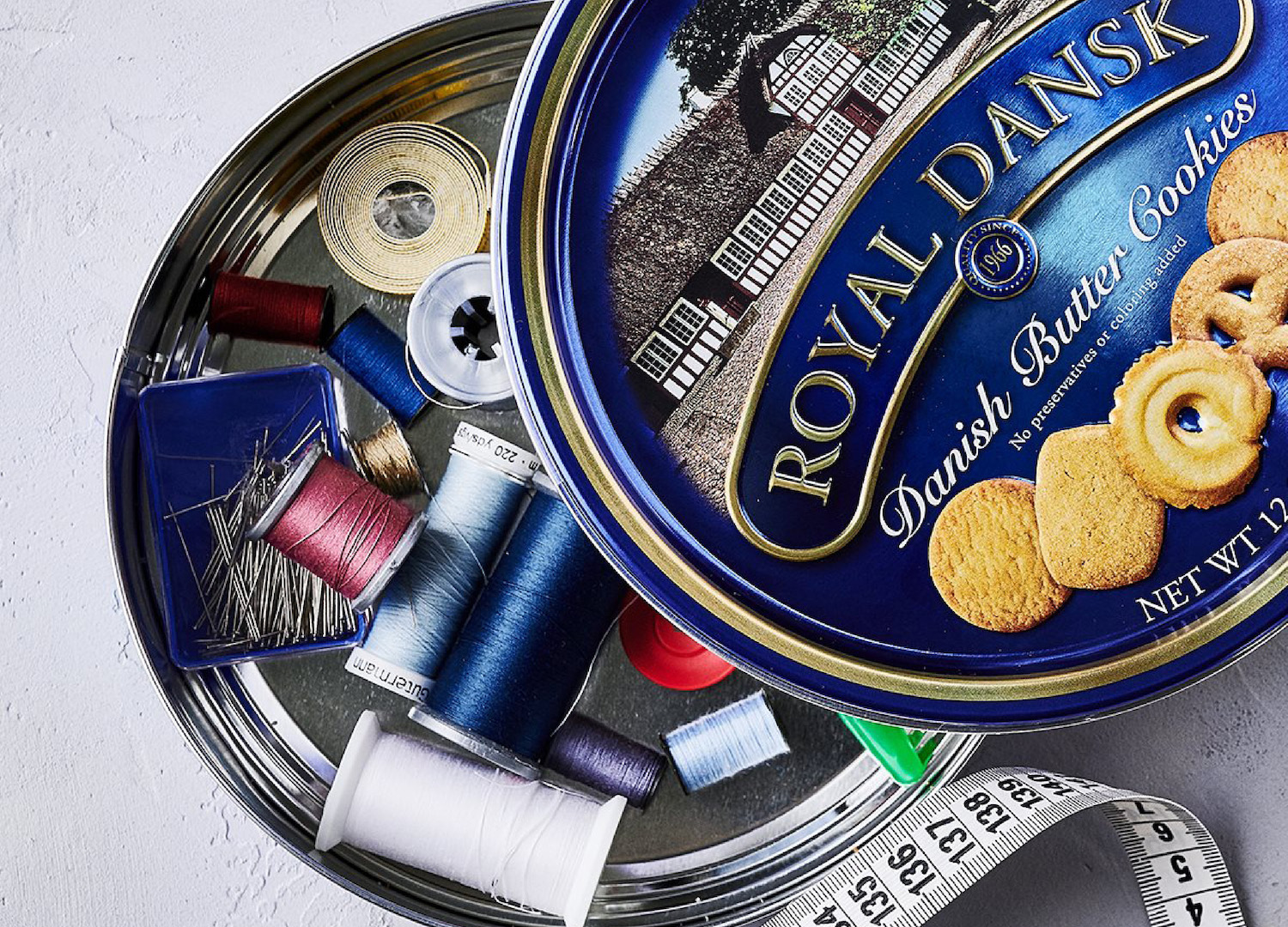 It’s a tale as old as time. You’re bopping around, killing time in the house of an older female relative and you spy on a shelf somewhere, a delicious-looking tin of biscuits. Why would she leave such a tasty treat unguarded? you question. But the beautiful biscuits depicted on the outside are too tempting. You overcome all sense of trepidation and prise it open only to discover… Sewing supplies?

It’s a far more common, and widespread, story than the rich individuality of humanity may lead you to suspect.

A Reddit thread from 2019 discussing this phenomenon became so thronged with wronged treat-seekers that one poster created a world map depicting cultures where you’ll find cookies inside a Royal Dansk tin.

“I did my best to read all the comments,” the cartographer wrote. “Here’s a world map of what’s been covered so far. 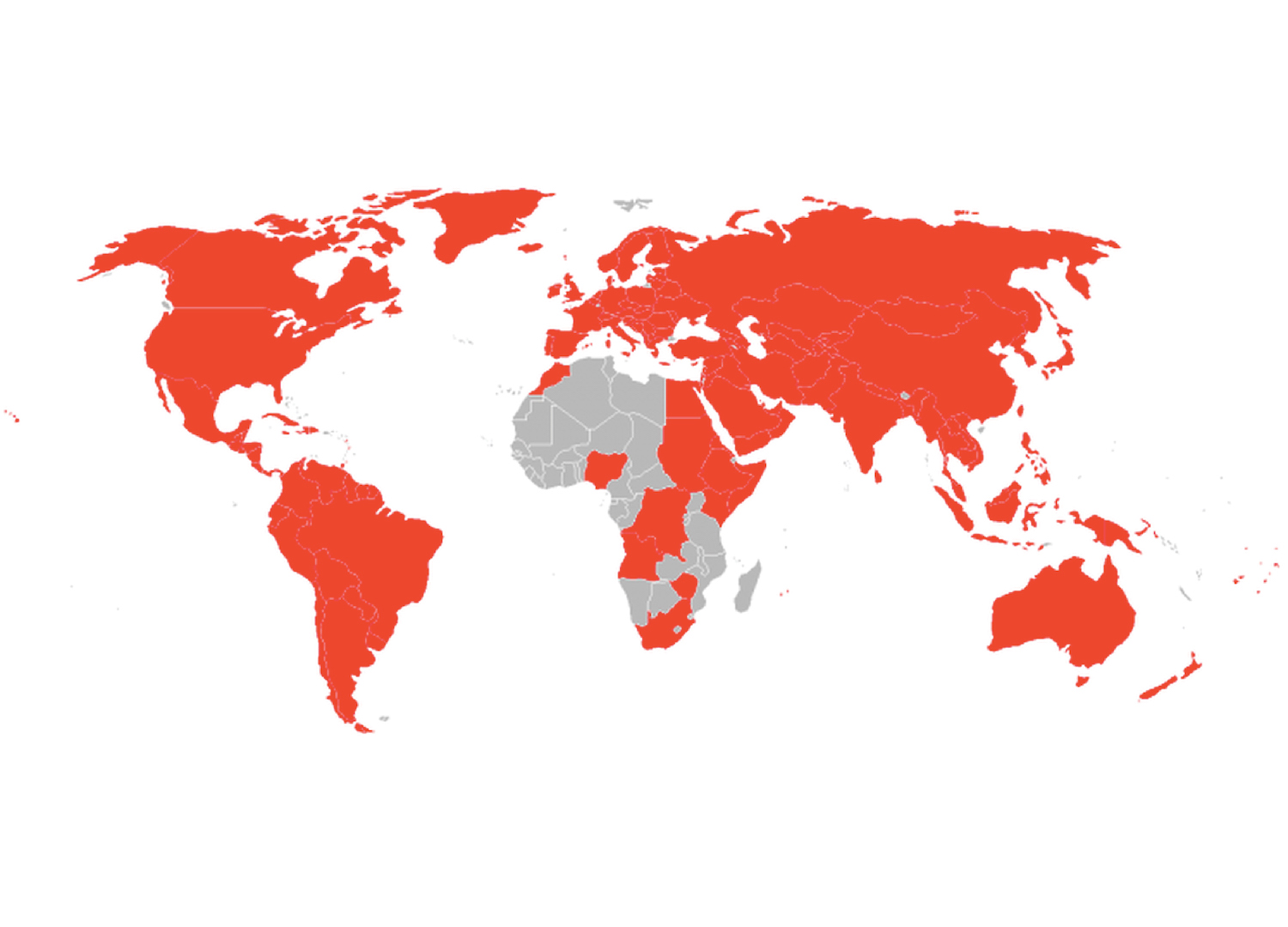 “Unclaimed countries for the curious (list is not exhaustive): Bhutan, few African countries, few islands in the Caribbean, Liechtenstein, Vatican, Luxembourg, most island nations in the Pacific.”

Whether you have an abuelita, a nonna, an oma or a grandma, it seems highly likely you too have stumbled across a biscuit tin deceptively filled with sewing supplies.

Thus remains an impossible question that drives our beloved sewing sleuth to the end of her tether in pursuit of the truth: what’s up with that?

Attempting to track the history of the humble biscuit tin has turned out to be a fairly challenging endeavour – largely because biscuits are so interesting yet so unrelated to sewing. I am forced to curtail myself from getting lost in the historical sauce, as it were. (Sidenote: if you are an American here to muddy the waters with your pretender biscuit scones, this is not the time, nor place.)

READ MORE – The Sewing Detective Investigates: The Case of the Tomato Pincushion

To be brief, biscuit – from the Old French bescuit is derived from the Latin bis (twice) and coctus (to cook, cooked) – entered the English language around the fourteenth century, though the concept of a biscuit is arguably far older. In the olden days before refrigerators or food preservatives, a huge priority was creating food that wouldn’t spoil quickly. One technique was to bake flat bread a second time in a slow oven in order to dry it out, making a nutritious, easy-to-store, easy-to-carry and long-lasting food for long journeys.

Biscuits have always been popular with travellers, sailors and soldiers. Ancient Egyptian sailors carried dhourra, Romans had buccellum. Navies in the Age of Sail took biscuit technologies to new heights – their hardtack was baked four times, rather than the classic two. Kept dry, it would last years without spoiling and was renowned for its inedibility, so indestructible that some sailors used them as postcards. 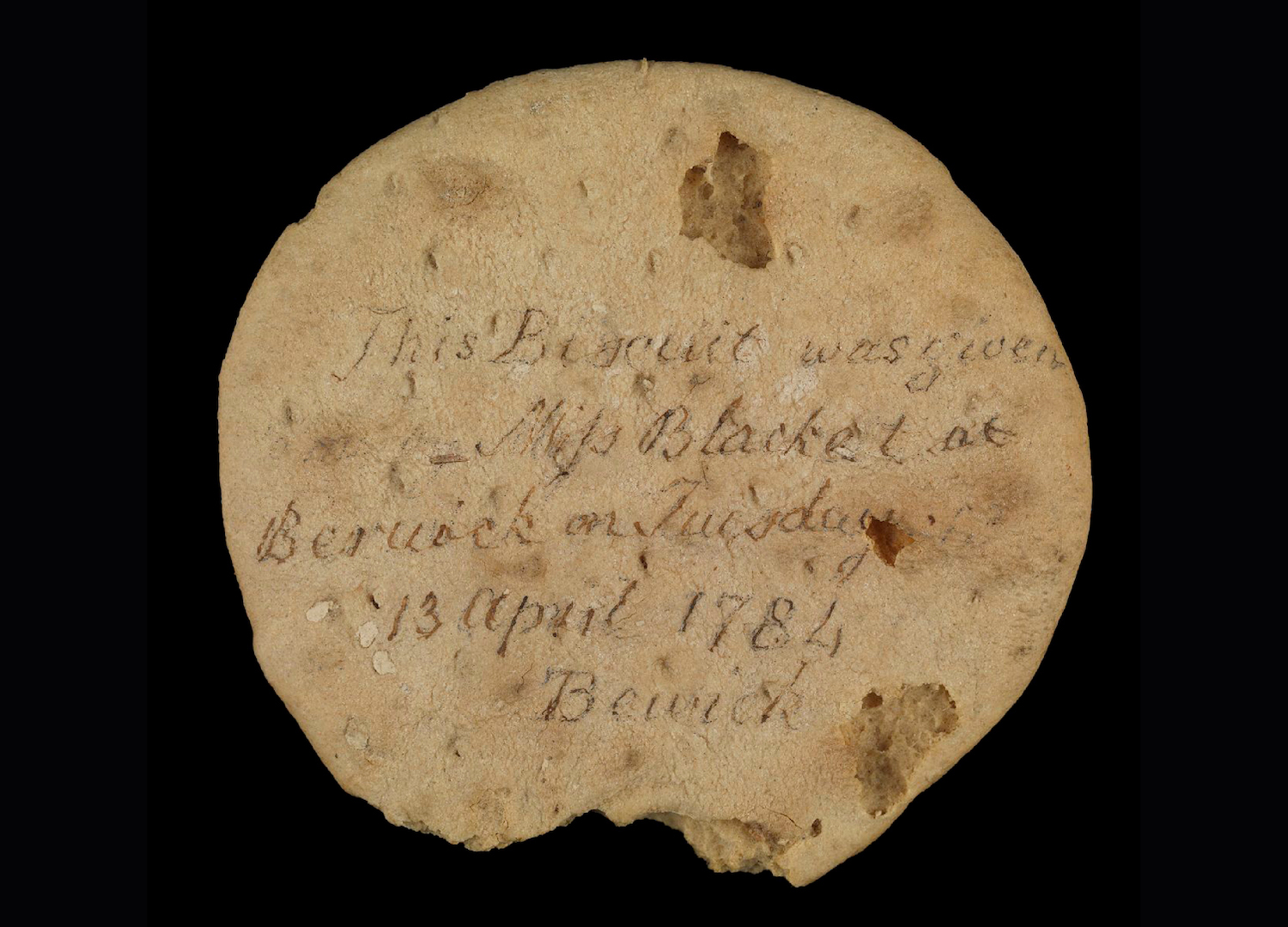 During the seventeenth century in an effort to balance the scales between “easily transportable” and “actually tasty”, biscuit scientists started experimenting with packaging as opposed to recipes – using airtight and reusable tinplate containers.

The first decorative biscuit tin was invented in 1831 by Huntley & Palmers, a Quaker firm in Reading, England. By 1900, they were the largest biscuit manufacturers in the world. Coincidence? Who can say, but everyone who was anyone in the biscuit business jumped on the decorative tin train.

This led to a graphic design arms race of sorts, with biscuit manufacturers competing to see whose tins could be the most whimsical, sporting the most idealised pastoral scene of their country of origin. The tin became independent objets d’art particularly popular amongst the emerging Victorian middle class. 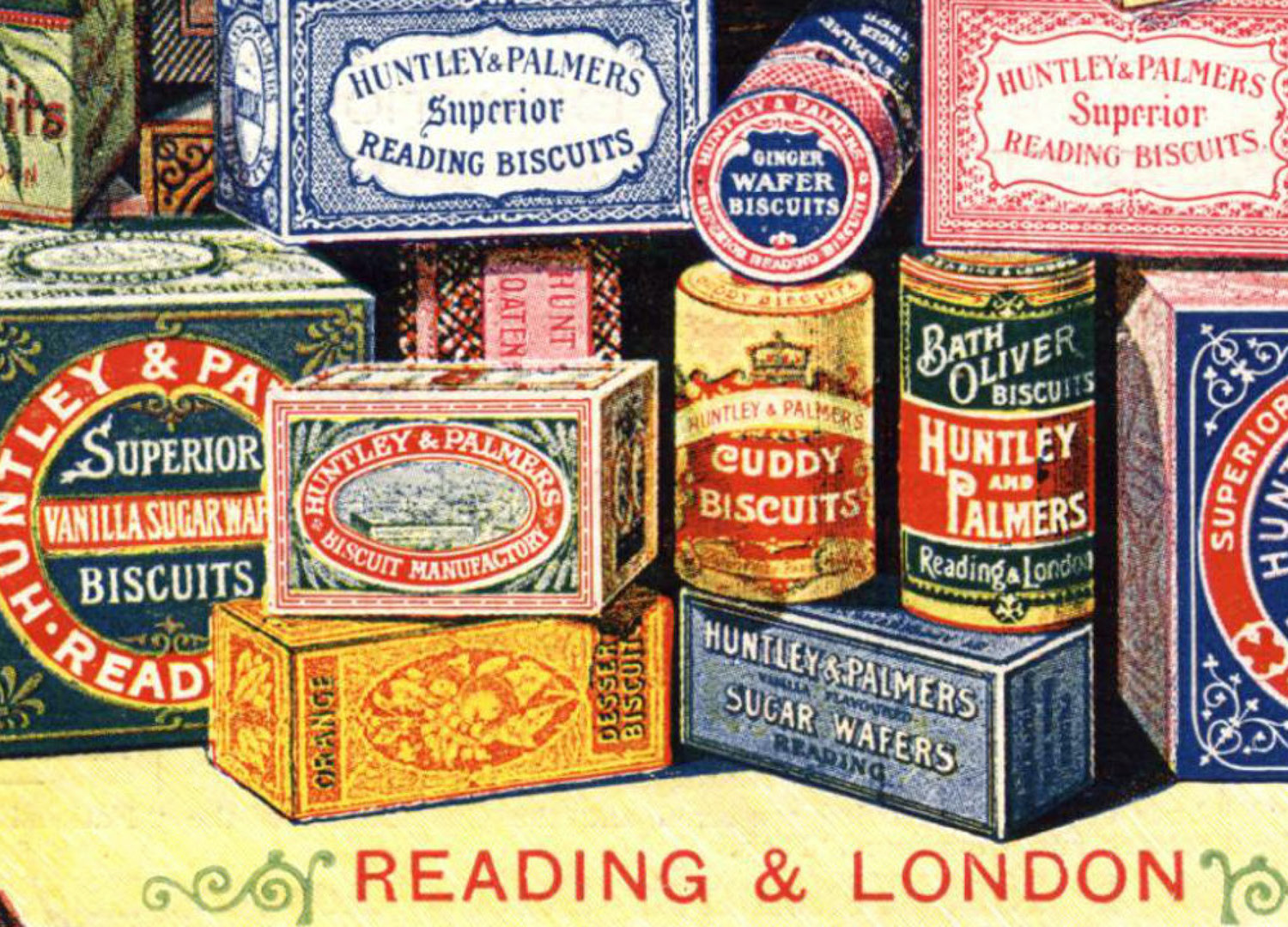 A tin of biscuits was not a prohibitively expensive luxury item, it was a taste of luxury, a special treat within the average man’s price range. For all these reasons they became a very popular present, a tradition which still continues to this day – see the tub of Quality Street chocolate someone is going to bring on Christmas day. A plastic tub is less fancy than a high quality tin though it is still a step of fanciness above a cardboard box, or a loose plastic sleeve.

Indeed the durability, and reusability of the biscuit tin was an integral part of why it was a respectable present. “Giving people biscuits in a tin was a double gift,” says Rachel Laudan, a food historian and author of Cuisine and Empire: Cooking in World History, “because they were waterproof and rat-proof and creepy crawly-proof.” More than a tasty treat, the point was the pretty container that you were expected to hold onto and reuse, whether as a storage for other foodstuffs or perhaps… sewing supplies?

Yes, we now arrive at the theoretical point of the article and the answer seems to be that most families, historically speaking, had sewing supplies that needed to be put away neatly, and most families had a fancy tin someone had once given them that would be a shame to throw away, perfectly useful still. Why buy a new sewing box when we’ve got a tin at home?

A tin of biscuits was not a prohibitively expensive luxury item, it was a taste of luxury,

When it comes to such a personal domestic practice as the reuse of storage containers, ‘official’ historical sources are sparse and we are largely limited to oral testimonies from living memory. Even then, stories of finding sewing supplies in biscuit tins date back as early as the 1920s.

A lot of people posit the practice comes from times of hardship, an evolution of the “mend and make do” mindset. A common theory is that the practice became most common around World War II when reducing, reusing and recycling were matters of national and societal necessity.

Interestingly, however, Royal Dansk Danish Butter Cookies, the biscuit tin that is the face of this phenomenon, did not even exist until 1966. How did this latecomer to the game leapfrog the competition to become the bespoke biscuit tin for putting things in? 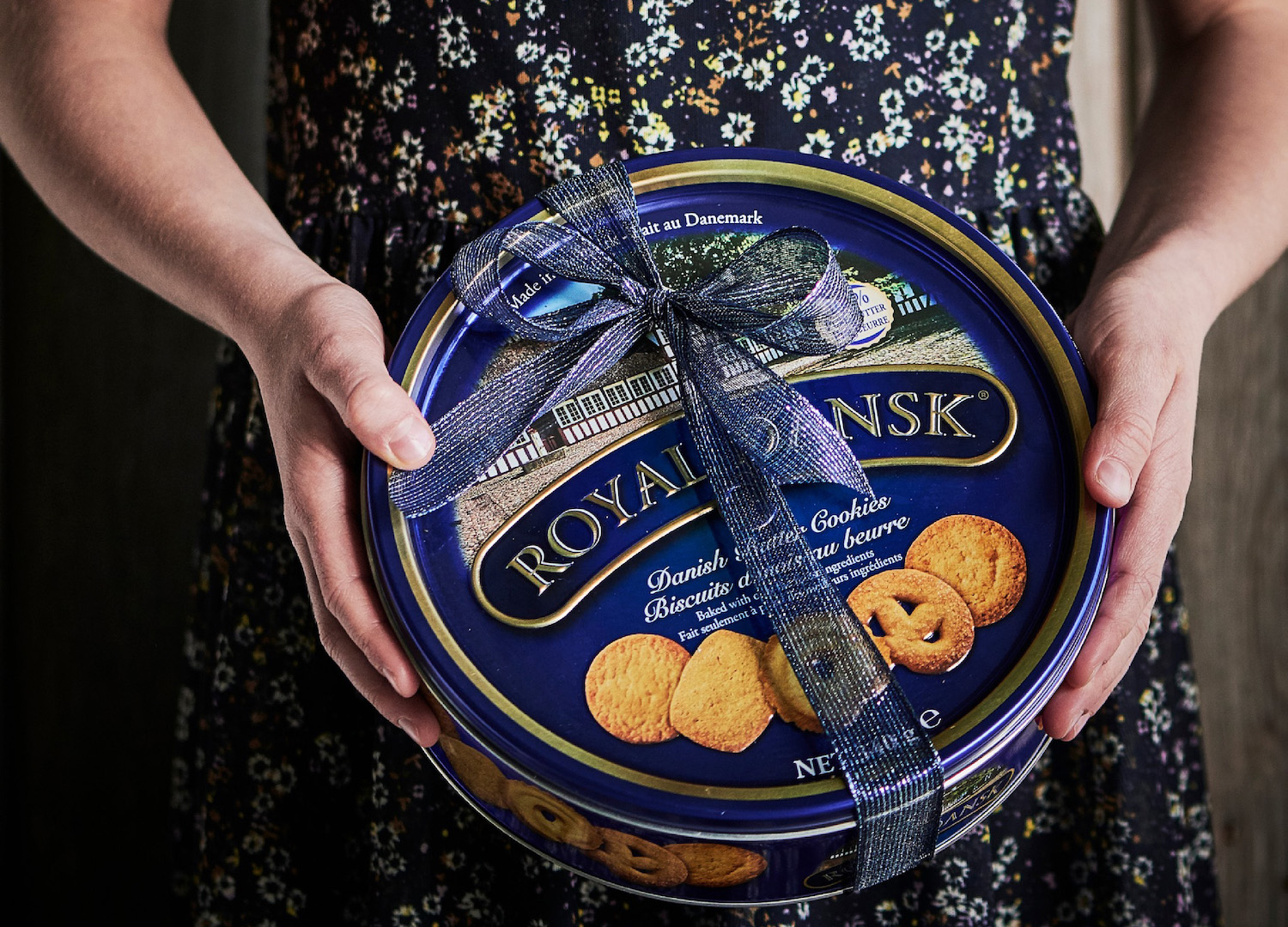 “We began packaging the cookies in the blue tins to help ensure the quality and freshness of each cookie as shipping expanded around the world,” Jette Rasmussen, a Royal Dansk brand manager, shares. “Since the tins are designed to be sturdy, we are pleased to know people are reusing [them] to hold a variety of things, including sewing supplies. We are honoured by the fact that generations of families have shared special moments together while enjoying the butter cookies we make – perhaps the tins protect special memories as well as biscuits.”

Like, ok, that doesn’t really answer our question. Sturdy is a positive quality. They also have a good shape, pleasingly round and flat, and are big enough to hold a multitude of sins without being cumbersomely large. Like Tiffany’s before them, they nabbed a striking signature blue. Their graphic design shows a charming old Danish farmhouse named Hjemstavnsgaard from the island of Funen and illustrations of their top-five fave cookies. Is that all it takes? Are their cookies that delicious? I don’t know, I’ve never found a tin with the actual biscuits inside them!

In previous instalments I’ve been able to attribute the ubiquity of certain accessories to their lack of trademarks which allows them to be widely produced at affordable price points. That is not the case here. These tins are in fact extremely trademarked. In fact it may be the fact that these particular biscuits are a bit more expensive, a little fancy, a higher-quality tin worth keeping around that is the key to their widespread success.

READ MORE – The Sewing Detective Investigates: The Mystery of the Stork Scissors

How much will a classic cask of Dansk set you back? Well in Australia it seems difficult to buy them at all. Both Coles and Woolworths only offer baby-blue knockoff “Crown Dane” bikkies and the official Royal Dansk website shows no licensed sellers on the continent. It seems those of us longing for a tin must live like our grandmothers before us and wait for an international visitor to bestow one upon us as a gift.

Or buy them online, I guess. Actually if you have a hankering to enter the exciting world of biscuit tin collection a great place to start is your local op-shop, in the kitchen wares and stuff collection out the back. You’ll find all sorts of fancy tins from Christmases and birthdays long past. I myself have a limited edition Oreo tin that, shamefully offbrand for the purposes of this article, I use to store my nail polish collection.

I’m not alone however. An anecdotal survey from Atlas Obscura suggests that while sewing supplies are far and away the most common surprise to be found inside a biscuit tin, there are other variants of familial hoarding discovered such as art supplies, rock collections, band patches, batteries, Tarot cards, matchbooks, cards, dice, wires, pocket knives, cash, cannabis, old photographs and “a bottle of vodka and a Bible.”

It seems those of us longing for a tin must live like our grandmothers before us and wait for an international visitor to bestow one upon us as a gift.

In an absolutely wild example, during the height of World War II the King of England, George VI, was told to stash some of the priceless gems from the Crown Jewels in a secret location so the Nazis couldn’t steal them. For years rumours circulated about the location chosen to shelter this treasure, from secret prison tunnels to ancient Welsh caves. Then in 2018, a documentary revealed he had buried them in his backyard, underneath a sally port in Windsor Castle, sealed in a Bath Oliver cookie tin. Royals, they’re just like us…

Although I don’t have a concrete answer for you fellow sleuths, I think the lesson we learned today is that it’s always worth opening any biscuit tin you see. Biscuits inside? You win. Sewing supplies inside? To the sophisticated mind that is also a win. Jewels inside? Hot diggity-damn, that’s an unexpected win.

There is literally no losing here. Case closed.

FEELING INSPIRED? WHY NOT GET YOUR SEW-ON WITH ALL OUR OTHER CRAFTY GOODNESS!