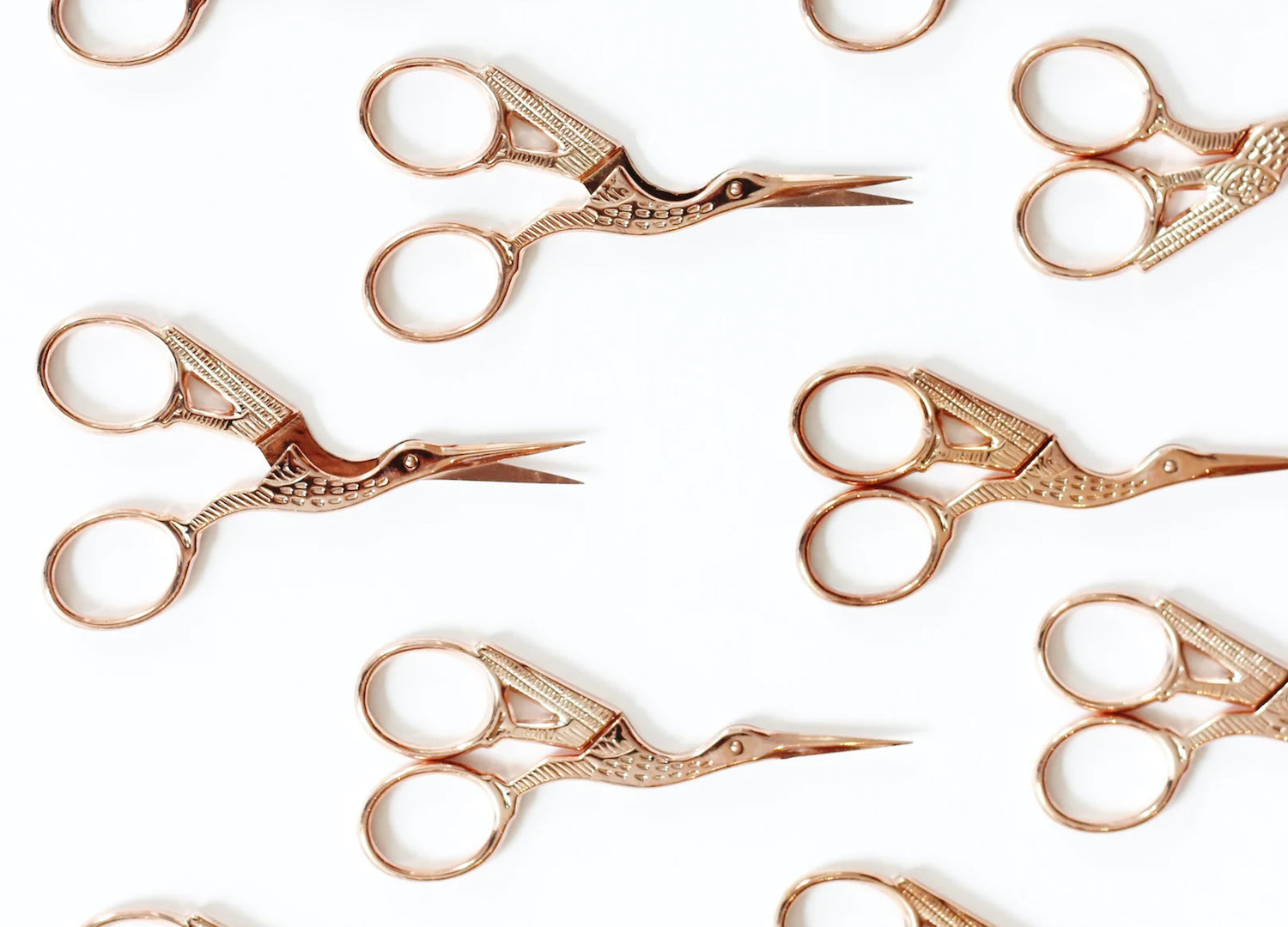 There are certain sewing accessories so ubiquitous that they seem to spontaneously spawn in the presence of sewing potential.

The Royal Dansk Danish butter cookie tin filled with sewing supplies, the tomato-shaped pin cushion and the little embroidery scissors shaped like birds. Even if you, somehow, don’t own any of the trio yourself, they are so iconic as to be instantly familiar to you.

images THE HOLY TRINITY OF SEWING

Why? And also, how come?

The sewing detective puts on her hat (perhaps a deerstalker, even though Sherlock Holmes was never textually described as favouring the style and the association likely stems from a single Sidney Paget illustration of ‘The Boscombe Valley Mystery’ in the Strand 1891) to solve the case, starting with an investigation into those suspicious stork scissors.

The bird is supposed to be a stork, by the way, for those of us who are not experts in avian identification, and this is significant in relation to its hypothesised history.

The chainsaw, for example, was invented in 1780 by two Scottish doctors for use in symphysiotomies – the removal of bones and cartilage from the pelvis to enlarge the birthing canal (yowch!) – before it was adopted by woodworkers to use instead on trees and such.

Similarly, the stork scissors are believed to have started in the hands of midwives in the late 1700s and early 1800s. Back then they weren’t scissors, but clamps used to stem the flow of blood in the umbilical cord. And they were stork shaped because… babies! (Side note: Why are storks associated with babies? Apparently, it’s a whole thing.) 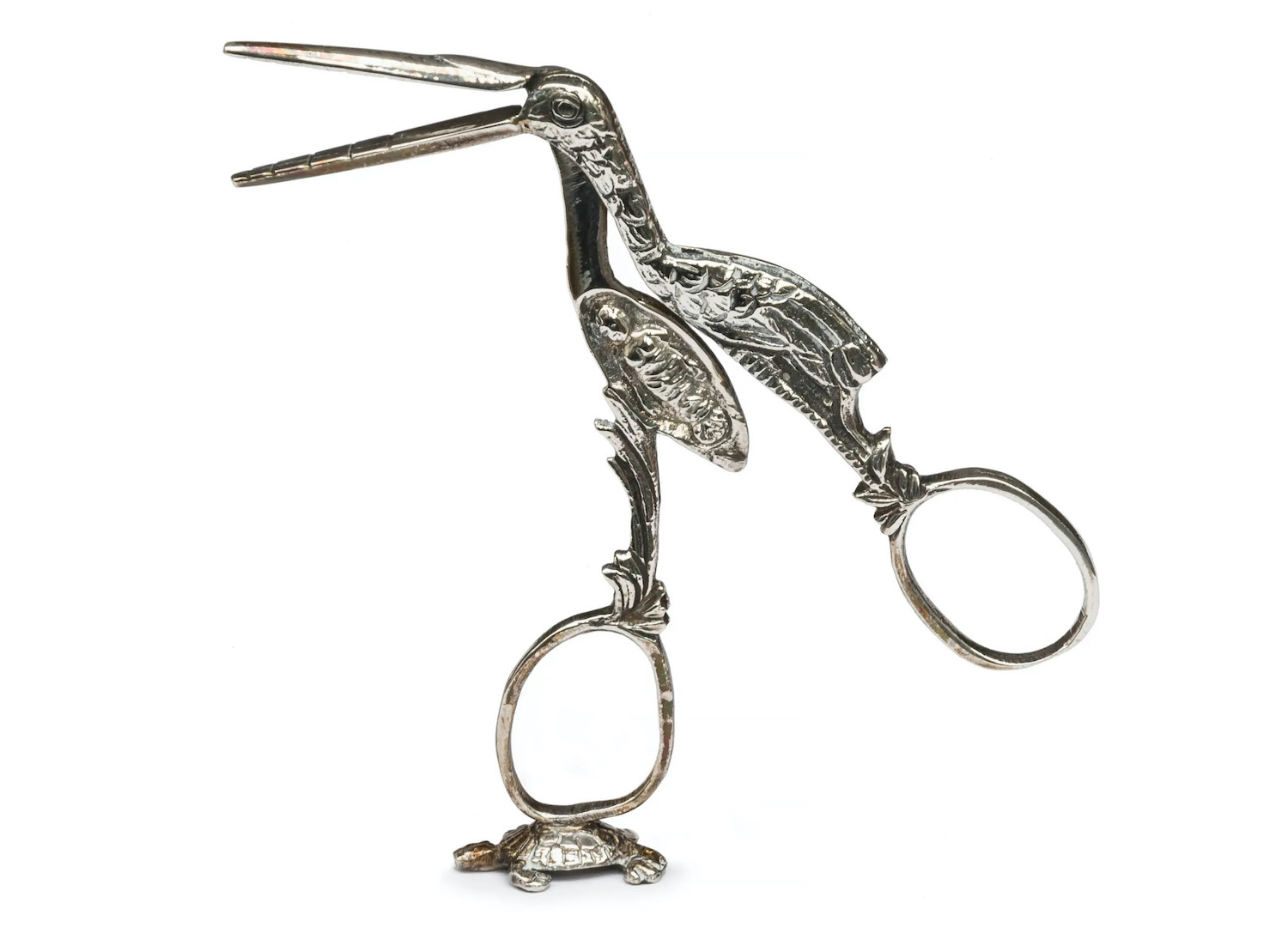 The eighteenth-century stork clamps from The Fashion and Textile Museum, pictured above, open to reveal a little baby in its little stork belly, and are standing on turtles – apparently a symbol of fertility. In this period it appears that visual metaphors were considered an important part of medical practice.

Childbirth can take a long time, particularly if you don’t have a chainsaw on hand, and midwives would have a bit of downtime between contractions. Often they would take the opportunity to get some embroidery done, perhaps ensuring the baby would have some nice clothes to wear by the time it arrived. This was so common in fact that midwives would often store their medical kit and their sewing kits together, providing ample opportunity for the stork scissors to jump back and forth, proving their practicality as a thread snipper and a cord cutter. 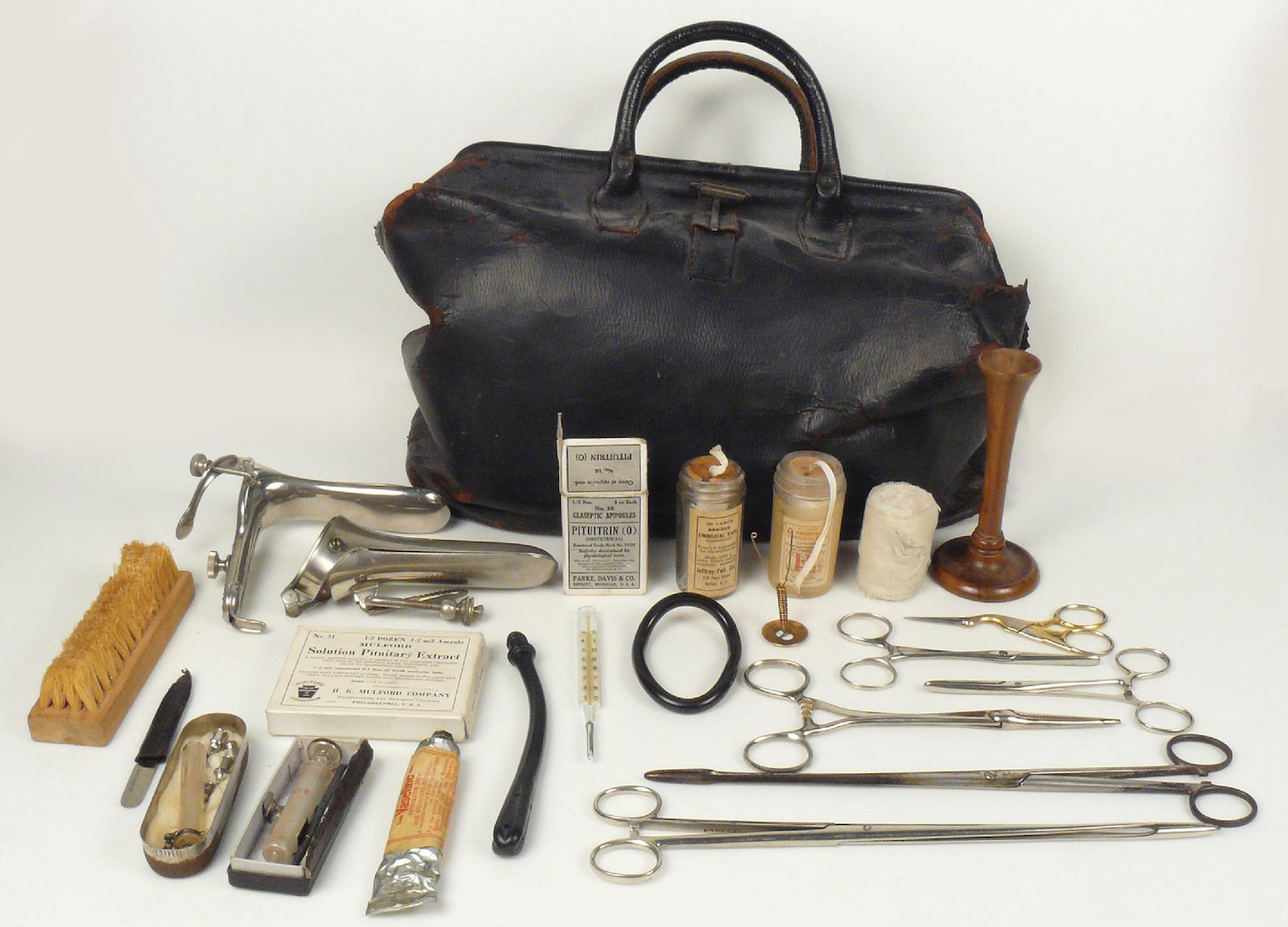 This midwife’s kit, from the National Museum of American History’s collection, is from the 1920s and features a classic pair of stork scissors among its assorted accoutrement. Eventually, however, the stork scissors landed firmly on the sewing side of the fence and medical professionals today utilise almost no whimsical decoration in their surgical equipment – sad.

So that’s where babies… or rather stork scissors come from. Why are they so popular and ever-present? That’s a more difficult question to answer.

Undoubtedly their age is a prominent factor in their preeminence. They’ve been around long enough to be established in our minds. You have them because your mum had them because your grandma had them and so on. It also helps that because no one owns or can copyright the design, stork scissors are manufactured by multiple companies around the globe which ensures they are widely available and affordable at multiple price points. (Sewing Detective Tip: Always Follow the Money!)

Another factor that cannot be overlooked is that they’re stinking cute. Humans, universally and to a man, love it when things are tiny, shaped like an animal and have a job. It looks like a bird but it’s scissors. Incredible!

Whatever the cause, these sweet snips aren’t just coasting on the wings of history, they’re an iconic part of stitching life and look to be here to stay.

FEELING CREATIVE? WHY NOT GET INSPIRED BY ALL OUR OTHER CRAFTY GOODNESS!