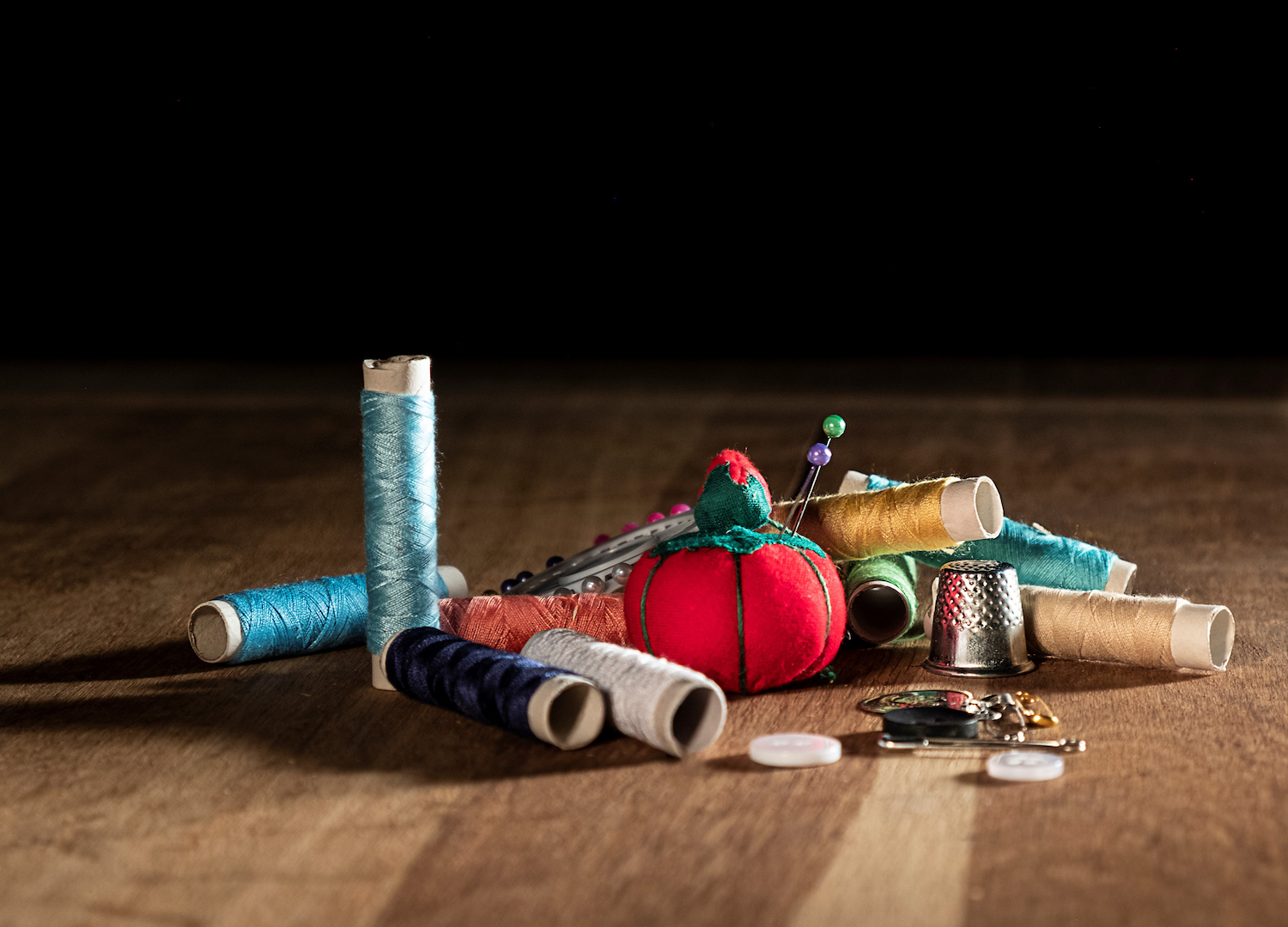 Welcome back sewing sleuths! We regret to inform you that there has been a terrible stabbing…

Thousands upon millions of pins have pierced this poor defenceless tomato, puncturing its thin skin and leaving a gory mess of tomato juice and spilled seeds. Wait… it appears this particular tomato was filled with sand and sawdust and is in fact a pincushion specifically designed for this very purpose. False alarm!

Like the stork scissors from our last caper, the tomato pincushion is an omnipresent sewing object whose origins are seemingly unknown. Why is a tomato, a fruit whose real, unstuffed form would be an objectively terrible choice to stab with a bunch of pins, the most popular form of novelty-shaped pincushions? And who is its little friend that sometimes hangs from its stalk?

The second is the most easily answered question. The little friend, sometimes thought to be a pepper, is apparently a strawberry. They are filled with emery powder and are supposed to be used to clean your needles. Why is a strawberry hanging out with a tomato? Likely because they can both be made using the same red and green fabric which cuts down on production costs. Plus they’re both berries! That’s right, the tomato is technically a berry, don’t fight it.

But back to the Solanum lycopersicum – that’s the scientific name for the tomato. Fun fact! Lycopersicum, of Greek origin, means “wolf peach”. 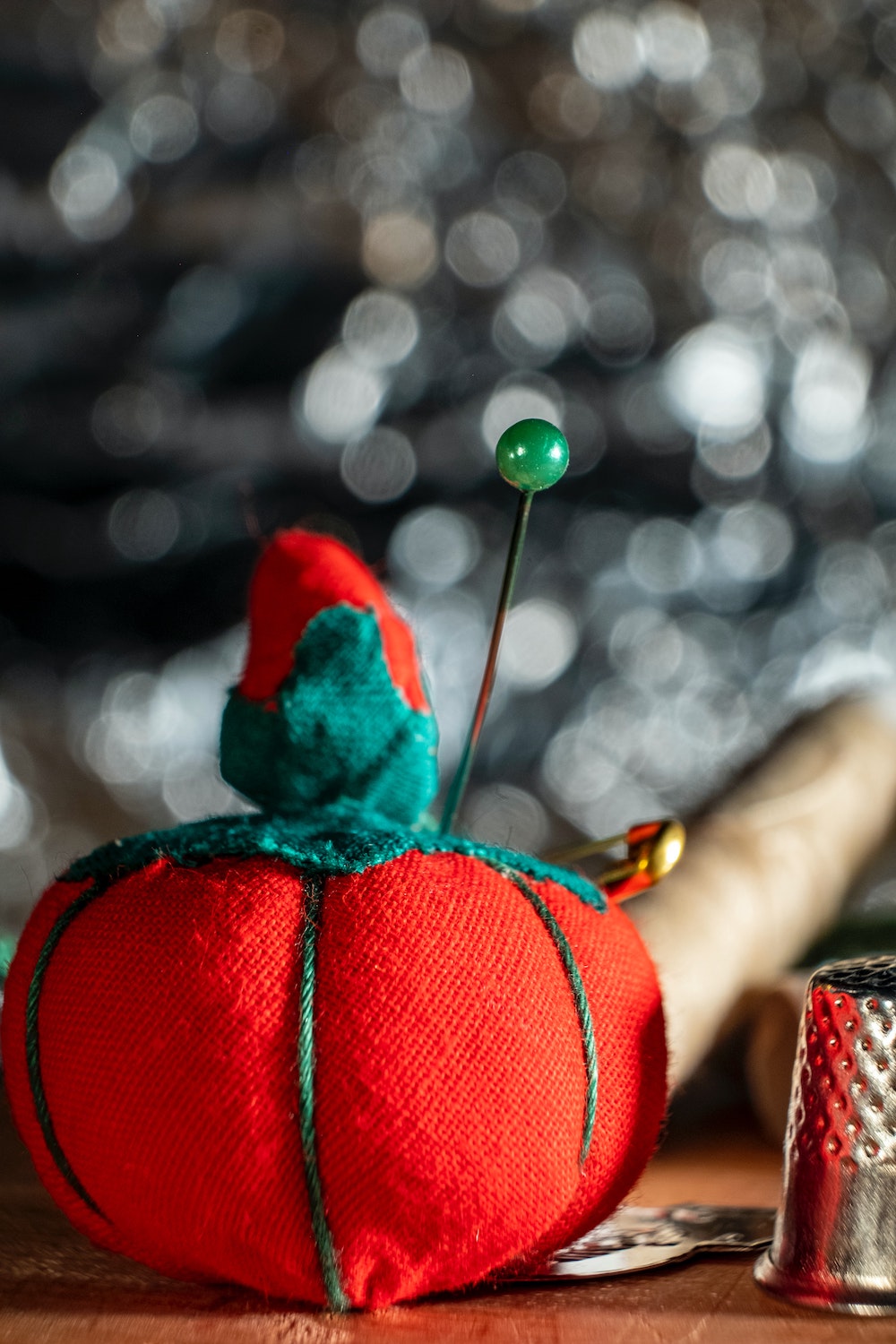 If you go looking into the origin of the tomato pincushion, the same story appears pretty consistently – according to tradition, placing a fresh tomato on the mantle warded off evil spirits and brought good luck to new homeowners. Given the seasonal availability and limited longevity of fresh tomatoes, people began fashioning false tomatoes from fabric and scraps, which became a convenient place to store pins and needles.

A cute story, neat as a pin. But if we dig a little deeper we find something smells fishy, and it ain’t the tomatoes…

There are simply no reliable sources to back up this story – in particular no records of tomatoes being considered a “lucky” fruit outside of retellings of this same tale, all referencing each other.

When the tomato was introduced to Europe in the late fifteenth century as part of the Columbian exchange, they were considered ornamental plants in Italy rather than edible ones (tomatoes had a rough introduction to Europe, associated with deadly nightshade, witchcraft and werewolves – wolf peach makes more sense now). They were grown in flower beds and used as tabletop decorations – equivalent to fresh flowers or seasonal gourds. This practice quickly disappeared when the Italians realised they could cook with them and they quickly became a culinary staple. There was no leaving tomatoes hanging around idle when they could be squished into a delicious sauce.

The lucky tomato tale is generally set in Victorian times which lines up with the timeline of when we begin to see extant tomato pincushions (though in a further ding against its authenticity, it is also sometimes attributed to the Renaissance or the Medieval era). This is almost 300 years after the tomato’s brief stint as a table-topper and in a completely different country. The Victorians loved writing down superstitions and strange behaviours! So why would such a folksy tradition go unreported in primary sources?

READ MORE – The Sewing Detective Investigates: The Mystery of the Stork Scissors

We’re sorry. We wanted it to be true too. It’s a story that fits together and makes sense. And that’s the danger of it. When looking for the historical reasons for things, human beings are drawn to simple, satisfying narratives, forgetting that history is just life and, as such, filled with random happenstances, coincidences and chaos. As the great humanist Terry Pratchett summarised Didactylos’ grand unified theory of life: “Things just happen. What the hell.”

So it’s a sham, a fake folk story, an unsubstantiated urban legend. Let’s go back to the board (you can’t see it but we have one of those crazy conspiracy boards full of red string) and look over the facts of the case.

Pincushions start popping up in the Middle Ages, referred to as “pimpilowes, pimpilos, pimplos, pimploes, pin-pillows, pin-poppets” among other names. Initially, pincushions were less popular than pin cases – carefully closable cases made of ivory, bone or silver to better protect what at the time were highly expensive and essential tools. Importantly at this time, pins were used to fasten clothing so were in daily use by the very rich as well as the working poor.

During the sixteenth century, we start to see pincushions overtake pin cases in popularity and by the seventeenth century, they were decidedly the accessory du jour. During this period, pincushions were highly decorated and elaborately embroidered often with flowers and abstract embellishments but sometimes with religious scenes. 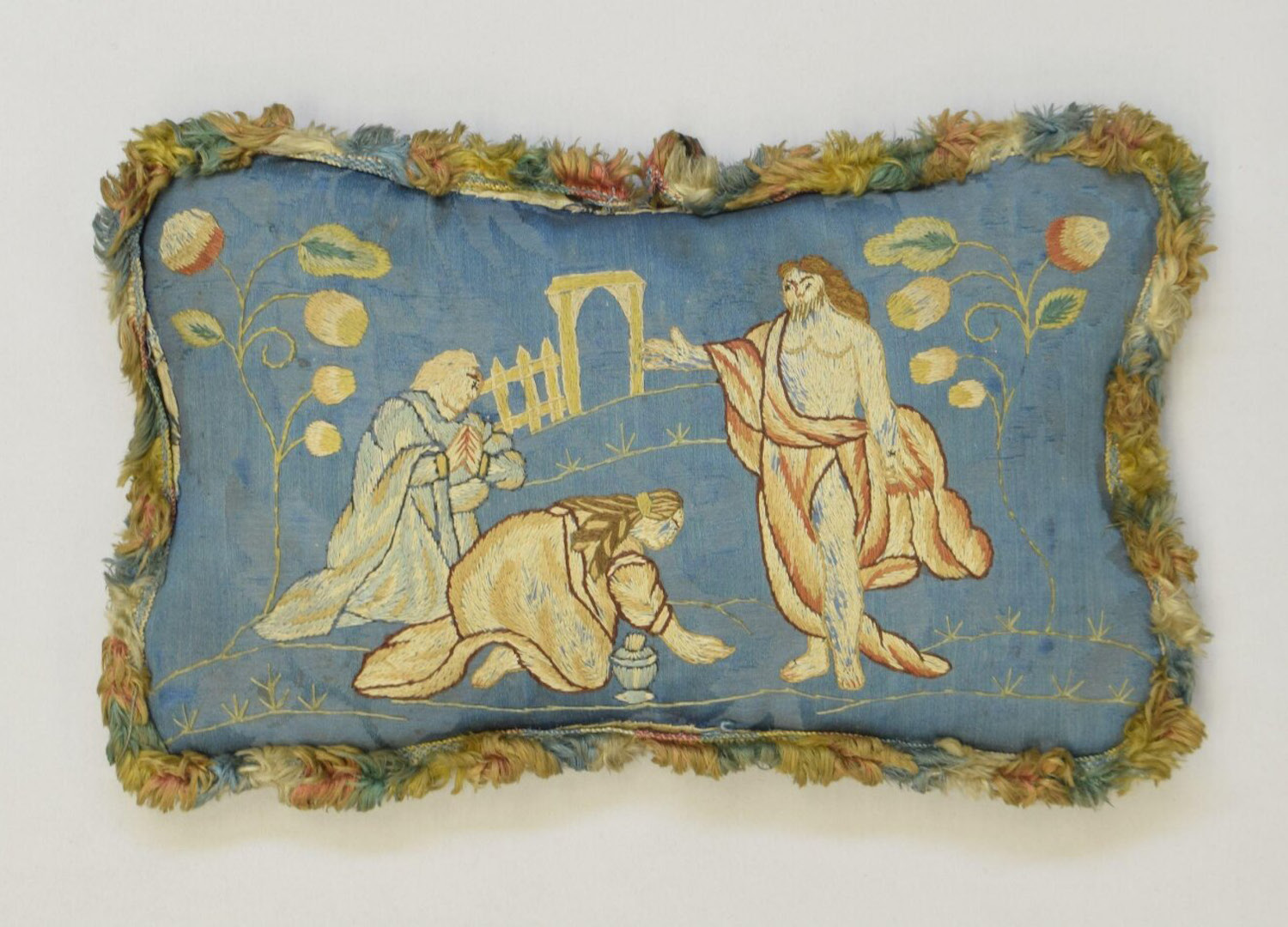 WAS NO ONE WORRIED ABOUT THE RELIGIOUS RAMIFICATIONS OF STABBING JESUS IN THE FACE WITH A PIN? PHOTO VIA V&A COLLECTIONS.

Moving towards the eighteenth century, we find a lot more pincushion designs that seem geared for the practical seamstress, as well as traditions of gifting handmade pincushions to celebrate births (though the baby pillows, or Layette pincushions, had their own specific purpose).

LEFT TO RIGHT: A PINCUSHION PLACED ATOP A CLAMP FOR KEEPING YOUR FABRIC IN PLACE; A SMALL PINCUSHION INTENDED TO BE WORN AT THE WAIST FOR ON–THE–GO SEWING; AND A BABY PILLOW. PHOTOS VIA V&A COLLECTIONS

Another fun fact! Pincushions have a fairly long-running tradition as sweetheart tokens, both as a courting gift – like, “Hey girl, now you’ve got a cushion to keep those pins in, you can start sewing your hope chest so we can get married – and as a symbol for couples separated by travel or war – like, “Babe, the pins you stab into this heart-shaped cushion represent the pain of missing you that will stab my actual heart.”

Finally, in the nineteenth century (Victorian times) with the coming of the industrial revolution, sewing materials were mass produced and novelty pincushions became the name of the game. Everything that could be a pincushion would be a pincushion – a bird, a guitar, a shoe…

And, of course, a tomato.

When the tomato pincushion first appears, it is surrounded by friends. In this period we see a veritable cornucopia of various fruit and vegetable pincushion designs. Thus the question becomes not why they were making pincushions shaped like tomatoes but why the tomato cushion has gone the distance to become the novelty pincushion of the modern era, outlasting so many of its peers?

Perhaps the enduring popularity of the tomato comes simply from its perfect balance in walking the tightrope between practicality and whimsy.

As we’ve already established people love it when something practical is shaped like something impractical. The red round shape of the tomato with its little green hat is also easily mass produced – none of the complex shapes of a carrot or a pear – while being instantly recognisable – other round fruits like apples need the little stem and leaf, an orange made of fabric looks like nothing. The spherical shape provides more surface area to hold more pins, while the flat bottom keeps it from toppling over. And its bright red colour makes it easy to spot and keep track of in a messy sewing set-up.

These admirable qualities may have given the tomato pincushion its initial head start, and now, like the stork scissors before them, their advanced age – in continuous use for almost two centuries! – gives them both freedom in the public domain and a certain memetic status that makes for ideal market recognition.

So we conclude another case, turning up our trench coat collars and murmuring “Who’s to say really…” as we walk out into the rain, learning a thing or two about tomatoes, pincushions and the dangers of folk etiology.

FEELING INSPIRED? WHY NOT GET YOUR SEW-ON WITH ALL OUR OTHER CRAFTY GOODNESS!