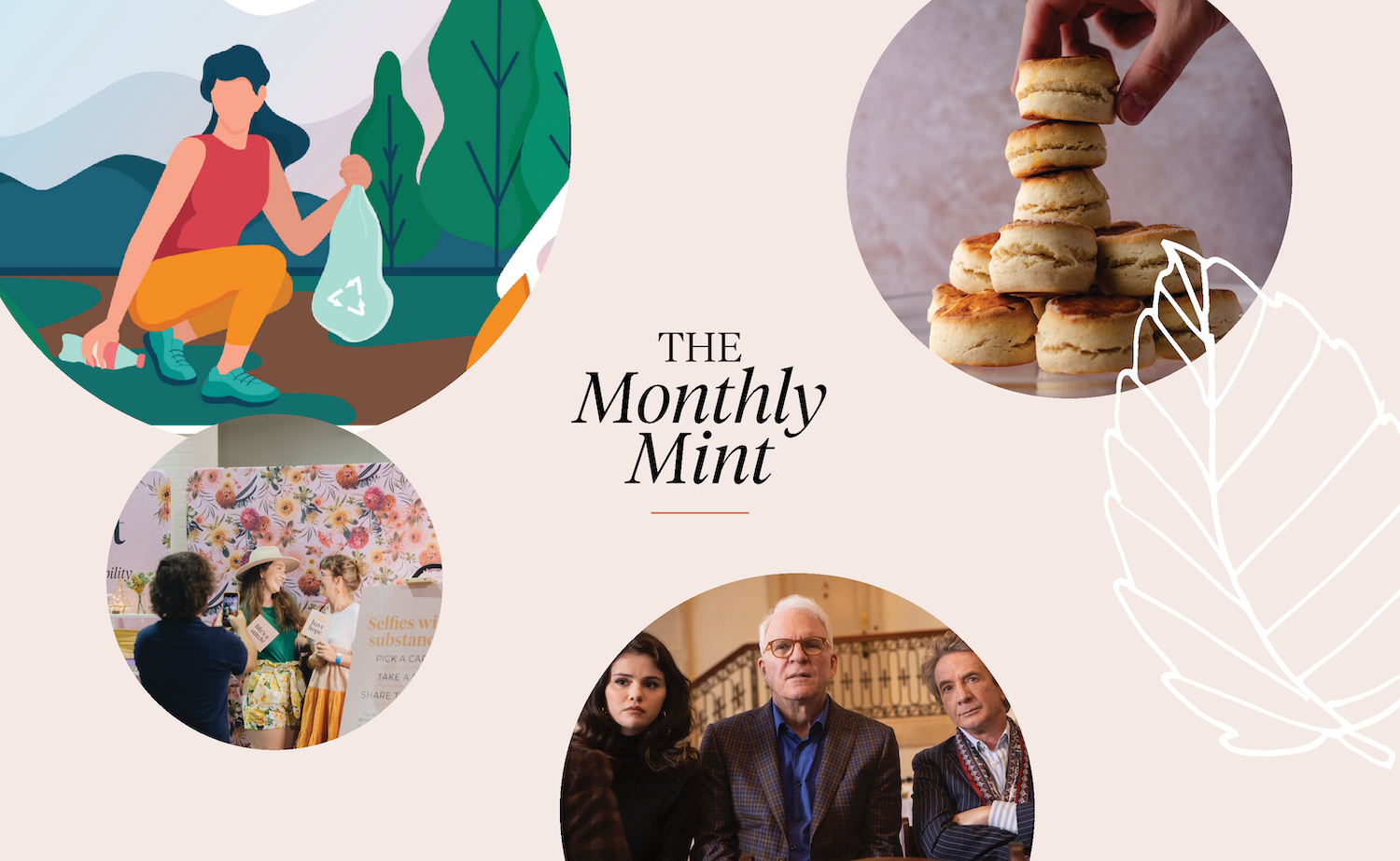 It’s time for another edition of The Monthly Mint – a chance for you to join in the Peppermint office chat about all the things we’re loving and living for each month.

Here at Peppermint we’re forever on the hunt for the best in sustainable reads, eats and wears to inspire you all. But have you ever wondered what we are really liking in our off-screen lives? We thought we’d open our front doors (despite how messy it might be inside) and share a few of our favourite things each month. That way you get the chance to get to know us a little better and if you’re ever in need of a recommendation next time you find yourself stuck in the “I don’t know what to watch/wear/read?!” scroll, you know where to start.

On my reading list at the moment: the original Women’s Weekly Cookbook. And the CWA cookbooks… scones and jam, anyone? Sounds like the epitome of health, doesn’t it! Well, I can attest to the impact it’s had on my mental health, if nothing else. Having made my way through various extreme diet disciplines over the years – usually authored by unqualified charismatic leaders – there’s something to be said for going back to the basics. I’ve tried (and trumpeted) all sorts of exclusionary eating regimes before, mainly for health, weight, environmental, ethical or illness purposes and I’ve learned and relearned many things along the way. Of course food and lifestyle plays a massive part in health specifically – there’s no denying that. But it’s not always everything – there are often so many other factors at play. Anyone who claims a one-size-fits-all approach is misguided at best. I still care about health these days, for sure, but the real, honest answer to it all doesn’t come wrapped up in a shiny marketable package. It’s boring and simple and balanced – and wouldn’t be served up on an eight-week retreat. There’s been a huge relief (and grieving, to a degree) in letting go of the things I once believed in. There’s also a huge relief in replacing that gluten-free, agave-sweetened, raw cacao bliss ball with a scone, every now and then.

There’s nothing quite like having a local – a watering hole where everyone knows your name. For me, it’s a little place called Helios, a solar-powered craft brewery in Yeerongpilly which recently won the Brisbane Lord Mayor’s Award for Environmental Sustainability.

Opened back in 2018 by environmental engineer and ACF Climate Change Ambassador Scott Shomer (who was trained by Al Gore), the brewery runs off 59 335W photovoltaic solar panels and a 15KW inverter. The brewing infrastructure was also custom-designed to maximise energy and water efficiency, minimise waste and carbon footprint, and capitalise upon Queensland’s renewable natural resources. In addition to harnessing the power of the sun, Helios uses an electric car for deliveries and repurposes grain waste as livestock feed and dog treats (of which my dog Winston is a big fan). It also goes without saying, the beer is damn delicious.

Helios’ sustainability initiatives have driven the brewery’s carbon footprint down by 98,807 kilograms – the equivalent of planting 1831 trees – and saved 572,800 litres of water, equal to 1,347,765 schooners of beer. Scott also hosts weekly climate change chats on Sundays at 3pm if you’re ever in the area. Did someone say drink beer and fight climate change? Don’t mind if I do!

Speaking of Helios, when I say it’s a local, I mean a brisk three-kilometre walk from my place. But my partner and I’s walks to and from serve a dual purpose – firstly, to get our step goals up, and secondly, to collect rubbish. You see, in our Containers For Change efforts (which you can read more about here), we’ve started taking a tote bag whenever we head out walking to clean up the neighbourhood while we make those 10c money moves.

Upon sitting down to write this blurb, I found out the activity has an official name: plogging. Yes, it’s real, I promise. What started as an organised activity in Sweden around 2016 has now expanded across the world with an estimated 2,000,000 people in 100 countries plogging daily. Living close to a park and a couple of schools, it’s pretty disheartening to see how much rubbish we can collect in one walk, but it’s such a simple action to help reduce plastic pollution. I must warn you though, common side effects include a slight God complex as you ask yourself, “Am I better than everyone else?”

I know we say it all the time, but gosh it’s wonderful to shop small and local! I was reminded of just how wonderful it is recently, when I was lucky enough to work the Peppermint stand at the Finders Keepers markets in Brisbane. With so many markets and makers being impacted by COVID this year and last, it was a joy and privilege to be at a real life, buzzing market and seeing lots of shoppers out, about and buying! You know that cute saying about how every time you buy from a small maker, someone does a happy dance? I saw so many happy dances over the course of the weekend, and even did a few myself – huge love to all those who came to visit the Pep team and bought subscriptions, issues and sewing patterns! With music, delicious food, amazing outfits and accessories on display, and lots of great chat, the market vibes were, as they say, immaculate. And don’t worry, dear reader, it wasn’t all work and no play for this little fashion duck – earrings were purchased, clothes were tried on and I even got a bit of a head start on some Christmas shopping. As we enter the season of giving and things start to slowly, safely open up, I really hope you can visit a local market near you soon. Otherwise consider shopping small online – not only is it much more fun and easier than battling crowds at the big shopping centres, it will make your heart sing (and dance)!

I am a long term devotee of the murder mystery novel. From Edith Blyton to Agatha Christie and Arthur Conan Doyle, you name it, I’ve read it. I also have a real weakness for fictional media set in places I know intimately. As an Australian who doesn’t live in Melbourne, it happens so rarely that when it does, I’m always tickled pink. So Livia Day, the alter ego of award-winning science fiction and fantasy author Tansy Rayner Roberts, who writes cosy murder mysteries set in my beloved Tasmania, is the absolute queen of fulfilling my niche literary needs. I loved her Cafe La Femme series, set in a Hobart hipster coffee shop, but her latest, Dyed and Buried, not only describes Kingston Beach in such detail I could probably give you the exact postal address of the heroine’s fictional shop, but also features a sleuth whose day job is sewing, dyeing and otherwise upcycling vintage clothes. Does Livia Day have spies beset upon me for inspiration? Only time will tell. In the meantime, another terrific mystery and fun read with a sewing twist from a homegrown Aussie author. Bravo!

Our society’s fascination with true crime is reaching a zenith at the moment. With several high-profile cases of real murders making the ghoulish jump between news and entertainment in a matter of hours, and TikTokers launching their own investigations into open cases, there is some concern it’s all going a bit too far. Humans have always had a long-term fascination with the macabre, yet now that true crime is a genre making millions, if not billions, of dollars a year, we are faced with more and more blatant commercialisation of real human tragedies that can start to leave a bad taste in your mouth. It’s a legitimately difficult question to wrestle with – how far away do we have to be from events before we can engage with them in good taste? Well, if you want to think about these sorts of questions but in a not bummer way, Only Murders in the Building stars Steve Martin, Martin Short and Selena Gomez as a comedically mismatched trio of true crime enthusiasts who find themselves embroiled in a mysterious death in their apartment building. The show turns a sharp but loving eye on true crime podcasts and reminds us that behind every shocking twist, there’s a real person whose life has gone terribly wrong.

For some reason I can’t put a finger on, I’ve been thinking a lot about death lately. I don’t think I know too many people who want to go into a coffin in the ground. My dad wants to be thrown out of his Cessna (hopefully post cremation). My mother wants a viking funeral. My sister does too actually, and not just ‘thrown into the sea’, she wants to take a vessel down with her in flames. I haven’t decided yet if I want to return to the ocean, be used to grow a tree, or have my ashes turned into a diamond which I will set into a ring and force my descendants to use in their proposals lest I bring a terrible curse down upon their heads. I guess what I’m trying to say is that there are far more options available to us than we might otherwise consider, especially in terms of sustainability. Even something as simple as electing for a cardboard coffin, which are not only fully biodegradable but often made of recyclable materials and also significantly cheaper than other options (funerals, much like weddings are an industry which is willing to price gouge to exploit people’s desire to do the right thing for the people they love). Some people might think this overly morbid but for me it is a comfort. A firm declaration of what someone wants for their funeral is a tangible remnant of a person at a time when you are most longing for one.

I’m currently listening to the latest book from John Boyne – The Echo Chamber. The scene is set in London today and the plot revolves around the frayed members of a wealthy family as their somewhat silly lives play out through and because of social media. The book reads like an Oscar Wilde satire with witty dialogue and plenty of LOL moments. I find myself giggling at the humour then shuddering at the truth of it, realising that nothing in this work of fiction is unbelievable and it’s all probably based on real-life happenings in this crazier-by-the-day digital world in which we find ourselves. The complexity of this existence sees people saying and doing things without being able to safely predict what the corresponding consequences (good or bad) might be. This is a very funny book, even funnier as read by veteran performer Richard E Grant who artfully animates the numerous characters, and though at times it reads like a soap-opera, it both entertains and holds up a mirror to anyone who lives (too much of) their lives on social media.