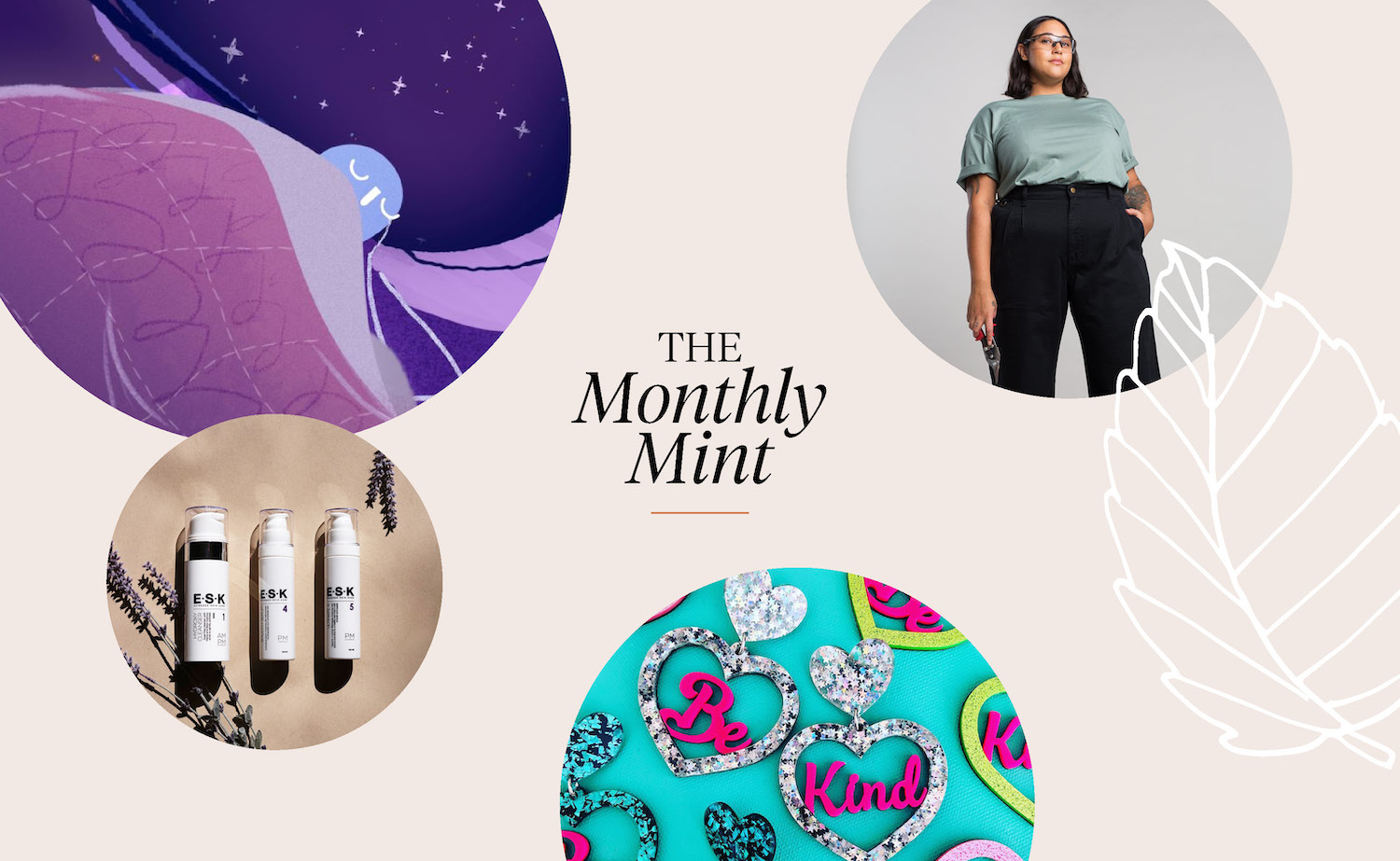 It’s time for another edition of The Monthly Mint – a chance for you to join in the Peppermint office chat about all the things we’re loving and living for each month.

Here at Peppermint we’re forever on the hunt for the best in sustainable reads, eats and wears to inspire you all. But have you ever wondered what we are really liking in our off-screen lives? We thought we’d open our front doors (despite how messy it might be inside) and share a few of our favourite things each month. That way you get the chance to get to know us a little better and if you’re ever in need of a recommendation next time you find yourself stuck in the “I don’t know what to watch/wear/read?!” scroll, you know where to start.

Satisfying my love of wry feminist and meme-based humour, my passion for movies and TV as well as for diversity in representation, the Heroic Girls Foundation (through its Facebook page) has been hitting me with solid gold lately. Billed as a “pop culture-based non-profit that advocates for better representation of women and girls in movies, television, books, comics and other mass media”, the non-profit aims to fight the gender norms that hold women and girls back in all facets of life. This is one account I don’t mind the algorithm having me pegged as liking. Yeah the girls!

We get sent a lot of products here at the Peps office. Sadly, not all of them make the cut for the magazine for a variety of reasons (there’s only so many pages, after all), but we do often road test the goodies that cross our desks. We love Dr Ginni Mansberg for her real talk on menopause so when her team sent us her anti-aging skincare range, ESK or Evidence Based Skincare, we were intrigued. Created out of frustration with the “fluff” of both the ingredients and marketing of other products, Dr Ginni and her husband set out to create an Australian-made product based on the “best available scientific evidence”. So, while outwardly I rage at our social conditioning that constantly tells us ageing is a bad thing, I’m also slathering this C serum all over my face daily. It’s far too early to tell if there’s any serious reversal of the ageing process (which has sped up markedly lately, let me tell you!), though my face does feel much nicer, softer and more hydrated since I started using it. And if I squint extra hard, the fine lines and sun damage do seem to disappear. Though maybe the squinting is counterproductive. Sigh.

Meditation and mental health app Headspace has just produced a new Netflix series called Guide to Sleep, which is now on my ‘to watch’ list despite a suspicion that it will simply tell me what I already know: I need to get more of those much-coveted ZZZs… No matter, I will forge ahead holding onto hope that my extenuating circumstance (which rhymes with smoddler) will one day grant me some reprieve from the yo-yo sleep life I currently ‘enjoy’. The seven-ep series is streaming now and covers everything from tips for better sleeping, breaking up with your phone, the science (and weirdness) of dreams and tips for beating insomnia and creating the best sleep environment you can.

While I was researching for an article I penned for Issue 50, I stumbled upon this great website called The Pin, created in 2015 by ABC journo Lucie Cutting and triple j Roots ‘n’ All host Nkechi Anele. Aimed at creating a platform for discussion and celebration of racial and cultural diversity in Australia, the site is now run by Lucie, with contribution from Nkechi and focuses on the individual stories of biracial and bicultural people in Australia. The podcast is only in its infancy but already serves up some interesting chats about hefty social and cultural issues.

The arts will never die! In my first trip back to the theatre dahhhlings in our strange COVID world, I caught the excellent Daniel Sloss touring Hubris earlier in the month. You might know him from the viral clip of his show X that recently made headlines in the wake of Sarah Everard’s murder, or his Netflix specials that are credited with the breakups of tens of thousands of relationships. It seemed almost impossible that an international comedian could be touring Down Under, but the Scot delivered his trademark dark and smart humour in an hour-and-a-bit chuckle fest that left me grinning ear to ear. And in a return to the realm of sweaty, heaving bodies and Doc Martens, Sydney pub rockers Pist Idiots reminded me of the joy of being crammed in a room full of strangers, all united by a love of live music and the possibility of a rock show. Let live music live!

It’s no secret Haus Of Dizzy earrings just scream fun. And as a longtime admirer, I finally committed some quite excellent ear candy from the Wiradjuri jewellery designer and self-proclaimed “queen of bling” to cart. Each bold and statement-making piece is designed, laser-cut, hand-painted and assembled in Fitzroy, with playful shapes sitting alongside important First Nations, environmental and feminist values. Don’t mind me, I’ll be the weirdo in the corner wearing the dinosaur earrings.

Containers For Change has become somewhat of an obsession in my household – a gamification of the recycling scheme that sees my partner and I competing each month to collect more containers than the previous. Not only do we find it encourages people in our lives to get involved with recycling (*help us, help you*), our local drop-off point is conveniently located in West End meaning a trip to the farmers’ markets afterwards can be funded by our recycling efforts or you can donate your bounty to local charities. Talk about win-win!

You’ve almost certainly heard of Serial. I don’t think it’s hyperbole to say that the first season of the award-winning podcast (about the murder of teenager Hae Min Lee and the subsequent conviction of her boyfriend Adnan Syed) was the podcast that launched a thousand others. Of course, podcasts had existed before Serial, but something about this story and storytelling style just seemed to capture the world’s attention. For me, season one was released at the same time as I had my first baby in 2014, so the voice of host Sarah Koenig and the story of Hae and Adnan was my constant companion through many long and lonely days – I must have listened to those first 12 episodes hundreds of times. Seven years on and the team behind Serial has now produced multiple series that tell one story with a bigger focus: like the tale of the US soldier who was held by the Taliban for five years and the political machinations that got him home. Or the series that took an intimate behind-the-scenes look at the workings of a small courthouse in Cleveland but was also a broader examination of the many faults of the American criminal justice system. The Serial production team then partnered with the New York Times for Nice White Parents – a five-part series exploring racism in US schools and how well-meaning people can often create the biggest problems. Serial Productions has again partnered with the New York Times to release a new five-part series: The Improvement Association. Focusing on alleged election tampering in the small Bladen County in North Carolina, it also examines larger issues of racial bias in US politics. All of these topics sound so heavy but each series is so carefully researched, so well-crafted and imbued with such a sense of the people and places they examine that I find them utterly compelling. I might not need the voices of my best friends the Serial team as much anymore to keep me company, but we all need these essential stories!

I know you’ve all been worried about my endless pursuit of the perfect jeans from last month’s Mint. I’m here to set your mind at rest and let you know that all the perfect pairs I wanted were sold out so I did not buy any jeans at all, and instead opted for a pair of pants from the ultra-cool Suk Workwear. Suk is well known for its broad sizing range, hardwearing fabrics (I am constantly covered in avocado and Nutella because… kids) and company values. One look at their Instagram or website and you’ll see that this is a brand that cares about representation and getting things right for their customers. Case in point: the relaxed work pants I bought are available in sizes 6-30. And that means EVERY SIZE between 6 and 30. Size 23 in navy blue is now all mine – achieving that perfect fit on both my bottom AND waist!

Before I worked for the wonderful Peppermint team, I was lucky enough to be in another women-led sustainability space, working with my best friend Cate at her shop, Brown’s General Store, in Paddington here in Brisbane. Our little shop was surrounded by lots of other wonderful, small businesses along the street including Bristle, run by amazing artist and businesswoman Melissa Simmonds. Well, Brown’s might have closed (the time was right and Cate and I were both ready) but Bristle is still going super strong and has actually just moved into a bigger shopfront on Latrobe Terrace. Mel sells such a treasure trove of pieces, including ethically made linen from Megbydesign, gorgeous sheets from Kip & Co, jewellery galore from lots of local makers and also Mel’s own stunning artworks. I am so excited to visit her in the new space (she is online too, never fear!) and to keep supporting small and local business!

You don’t have to start at the beginning, just land somewhere in the middle of the 909 episodes that are on offer through the BBC Radio 4 discussion series In Our Time – now conveniently available on podcast. The series started in 1998 and is presented each week by Melvyn Bragg as he discusses anything and everything historical with a range of academics and experts: from famous and infamous humans, institutions, movements and religions to every small or large battle and even gin. I feel smarter just reading through the episode titles and it’s my go-to place when I need to quiet my mind and remember how much I don’t know.

Speaking of history, I despair that there seems to be a lapse in our acknowledgement of the medical miracle of immunisation and the impact it has had on improving the quality of life and life span for our species. It was without hesitation that I sought out my first dose of the COVID vaccine this month. One small step for me, and the only step to take in the universal effort that is required to move beyond this pandemic.