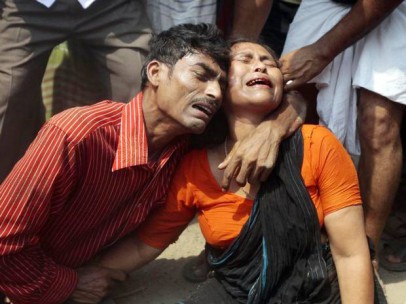 The fallout from Wednesday’s garment factory collapse in Bangladesh continues, with nearly 1000 people feared dead and many more seriously injured in what is the country’s worst ever industrial accident. The Dhaka-based factory housed production of several mass market clothing brands, including Mango, Walmart, Kik and Primark, with workers ordered to remain on the premises after factory owners received warnings on Tuesday of dangerous cracks in the building’s structure. (In contrast, staff from a bank in the same building were immediately evacuated). As the rescue effort forges on, those on the ground continue to report the sound of screams from victims trapped inside the wreckage; including, perhaps most tragically, children, as the building also housed a creche on its 7th floor.

The incident highlights the true dangers and human cost of fast fashion production – an industry that accounts for 80 per cent of Bangladesh’s exports and employs some three million workers, mostly women, on near or below-living wages. “Bargain-basement [clothing] is automatically leading toward these types of disasters,” John Hilary, executive director at War on Want, told Reuters. He said Western clothing retailers’ desire to remain ultra-competitive in this fast, cheap fashion industry has translated into increasing pressure on foreign suppliers to reduce costs. “If you’ve got that [pressure] then it’s absolutely clear that you’re not going to be able to have the right kind of building regulations, health and safety, fire safety. Those things will become more and more impossible as the cost price goes down.”

Oxfam’s Gareth Price-Jones said companies need to demand change in the culture and conditions of clothing factories in Bangladesh, where profit comes before safety. “The only reason there were workers in that building was because management told them they would be docked pay if they did not go to work” – an option few could take in an industry where already perilously low wages have declined even further in the last 10 years. “Western buyers could be doing much, much more, and they have a moral responsibility to do so.” Consumers too, he said, have the power to “hold brands to account”.

Meanwhile, campaigners are urging companies to sign up to the Bangladesh Fire and Building Safety Agreement (BFBSA) which would require signatories to fit out their suppliers’ premises to full safety standards. “Change will only happen when major brands and retailers say that there is such a risk to their reputations that they will finally take the step of protecting the lives of their workers,” said Scott Nova from the Workers Rights Consortium. “This is not an industry driven by moral considerations but the bottom line.”

We can only hope that the silver lining to this awful tragedy is a new level of awareness and accountability, as the conditions in offshore clothing factories finally get the attention and discussion they deserve. Please share this story with your friends, family and colleagues, and always speak about where your clothing comes from and at what cost. It’s the least we can do to honour the victims of this tragedy whose lives were taken too early and too preventably.
{via Reuters, The ABC, The Independent}