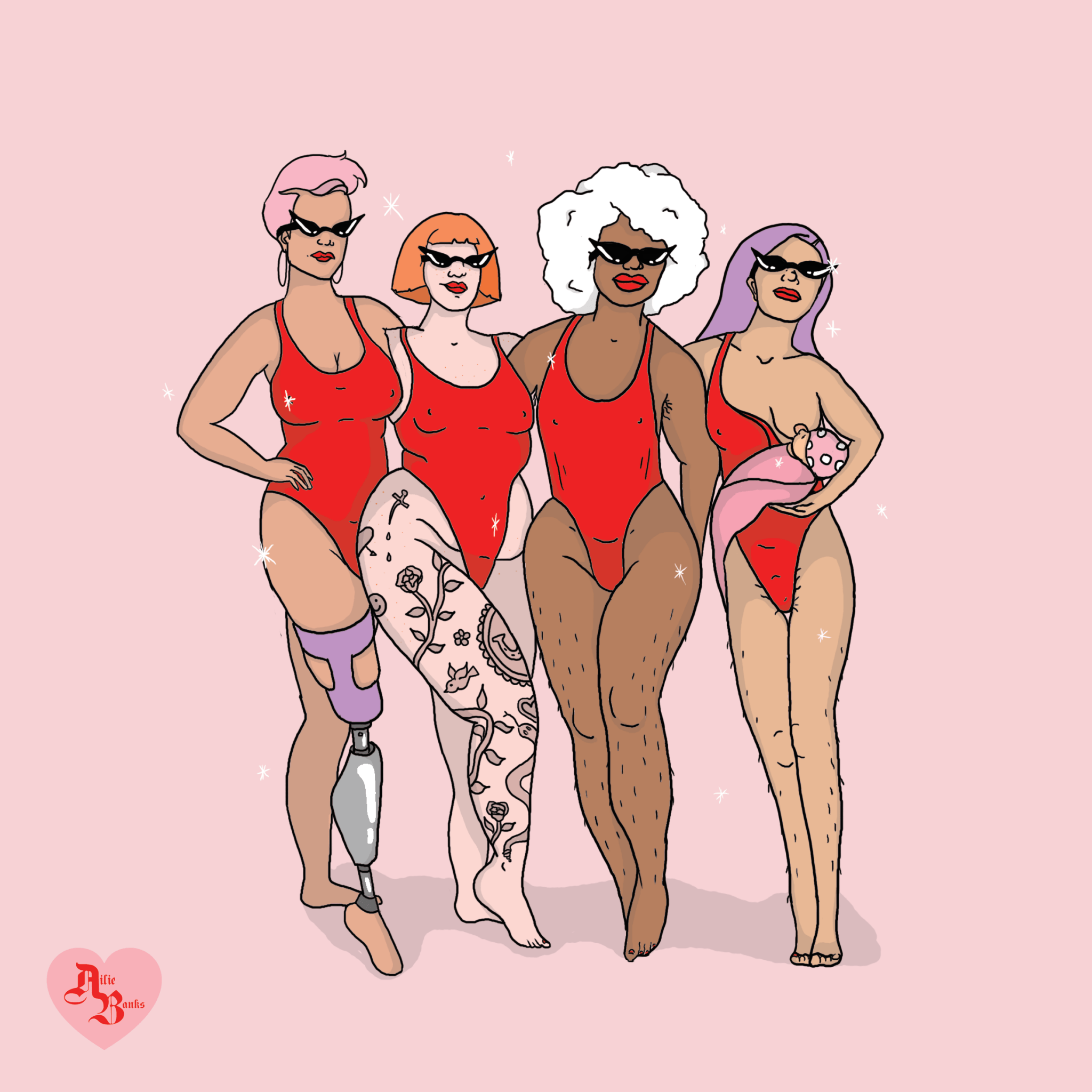 This International Women’s Day, take inspiration from the wise words of several women creating great change across the world. Illustration by Ailie Banks – another inspiring Australian woman who uses art as a vehicle for acceptance and change.

The year 2078, I will celebrate my 75th birthday. If I have children maybe they will spend that day with me. Maybe they will ask me about you. Maybe they will ask why you didn’t do anything while there still was time to act. You say you love your children above all else, and yet you are stealing their future in front of their very eyes.Until you start focusing on what needs to be done rather than what is politically possible, there is no hope. We can’t solve a crisis without treating it as a crisis. We need to keep the fossil fuels in the ground, and we need to focus on equity. And if solutions within the system are so impossible to find, maybe we should change the system itself. We have not come here to beg world leaders to care. You have ignored us in the past and you will ignore us again. We have run out of excuses and we are running out of time. We have come here to let you know that change is coming, whether you like it or not. The real power belongs to the people. Thank you”.

Build a man who understands that we are only human and we have needs and sometimes we need help. Tell him that we are smart. Show him smart women that you admire. Tell him to look for that in a girl. Show him films with tough female leads from when he’s young. Tell him that we’re funny and show him funny women. Tell him we are strong and tell him that’s a good thing. Tell him it’s cool. Tell him it’s sexy. Show him how strong you are, and don’t just pick up after him and do not pick up after a man in your household. Command the respect that you deserve. Be his friend. Be his teacher. Spend your life with and raise him. If you choose to raise him with a man, in front of a good man who shares your beliefs and respects you. Do not ever sell yourself short. We may have to fight our generation of men and the one before that and the one before that for our rights, for our safety, and for our voices to be heard, which is sad and it is frustrating. And I know that I am asking you for even more labor, but we have a golden window of opportunity here to completely reshape the future of our entire society from our living rooms. Build these men from scratch to fit women, rather than just taking up all the space and forcing us to compact ourselves to a little corner allocated to us by them.

You are never too old or too damaged to do the things that matter most. Life is a precious and fragile thing— don’t put your dreams on hold, make them happen today, not tomorrow.

Next time, ask: What’s the worst that will happen? Then push yourself a little further than you dare. Once you start to speak, people will yell at you. They will interrupt you, put you down and suggest it’s personal. And the world won’t end.

And the speaking will get easier and easier. And you will find you have fallen in love with your own vision, which you may never have realized you had. And you will lose some friends and lovers, and realize you don’t miss them. And new ones will find you and cherish you. And you will still flirt and paint your nails, dress up and party, because, as I think Emma Goldman said, “If I can’t dance, I don’t want to be part of your revolution.” And at last you’ll know with surpassing certainty that only one thing is more frightening than speaking your truth. And that is not speaking.

And at last you’ll know with surpassing certainty that only one thing is more frightening than speaking your truth. And that is not speaking.

As long as discrimination and inequities remain so commonplace around the world – as long as girls and women are valued less, fed less, fed last, overworked, underpaid, not schooled and subjected to violence in and out of their homes – the potential of the human family to create a peaceful, prosperous world will not be realized … If there is one message that echoes forth from this conference, let it be that human rights are women’s rights and women’s rights are human rights, once and for all.

Maybe young women don’t wonder whether they can have it all any longer, but in case any of you are wondering, of course you can have it all. What are you going to do? Everything, is my guess. It will be a little messy, but embrace the mess. It will be complicated, but rejoice in the complications. It will not be anything like what you think it will be like, but surprises are good for you. And don’t be frightened: You can always change your mind. I know: I’ve had four careers and three husbands.

Actor Ellen Page at the Time To THRIVE conference 2014.

If we took just five minutes to recognize each other’s beauty instead of attacking each other for our differences – that’s not hard, it’s really an easier and better way to live. And ultimately, it saves lives. Then again, it can be the hardest thing – because loving other people starts with loving ourselves and accepting ourselves. And I know many of you have struggled with this, and I draw upon your strength and your support in ways that you will never know.

And I am here today because I am gay. And because maybe I can make a difference to help others have an easier and more hopeful time. Regardless, for me, I feel a personal obligation and a social responsibility. I also do it selfishly, because I’m tired of hiding. And I’m tired of lying by omission. I suffered for years because I was scared to be out. My spirit suffered, my mental health suffered, and my relationships suffered. And I’m standing here today, with all of you, on the other side of that pain. And I am young, yes. But what I have learned is that love – the beauty of it, the joy of it, and yes, even the pain of it – is the most incredible gift to give and to receive as a human being. And we deserve to experience love fully, equally, without shame, and without compromise. There are too many kids out there suffering from bullying, rejection, or simply being mistreated because of who they are. Too many dropouts. Too much abuse. Too many homeless. Too many suicides. You can change that, and you are changing it.

It is upon you to increase your virtue, the virtue of courage—it is upon you. You will be challenged mightily, and you will fall many times. But it is important to remember that it may be necessary to encounter defeat, I don’t know. But I do know that a diamond, one of the most precious elements in this planet, certainly one in many ways the hardest, is the result of extreme pressure, and time. Under less pressure, it’s crystal. Less pressure than that, its coal, less than that, its fossilized leaves are just plain dirt.

You must encounter, confront life. Life loves the liver of it, ladies. It is for you to increase your virtues. There is that in the human spirit which will not be gunned down even by death. There is no person here who is over one year old who hasn’t slept with fear, or pain or loss or grief, or terror, and yet we have all arisen, have made whatever absolutions we were able to, or chose to, dressed, and said to other human beings, “Good morning. How are you? Fine, thanks.”

Therein lies our chance toward nobleness – not nobility – but nobleness, the best of a human being is in that ability to overcome.

Aboriginal Rights activist Faith Bandler at the Talkin’ Up Reconciliation Convention in Wollongong in August 1999.

My learning was rather hard and slow. It took some time for me to understand, when there are millions in the world today who are hungry, millions who are homeless, millions who are without work, the wrongfully imprisoned, the deaths in custody, the tortured, the mass murder of women and children, why in the name of creation our differences should matter. Why is it so hard to find our commonalities?

The most commonly voiced opinions of some who are willingly blind is that we focus on the failures and faults and too little praise is given. But if praise must be given it ought not to be given to the powerful but rather to the powerless, who patiently bear the brunt of many misdeeds and indecencies.

If you are watching this right now, all I have to say is that this is hard work. I’ve worked hard for a long time and it’s not about winning, but what it’s about is not giving up. If you have a dream, fight for it. If there’s a discipline or a passion, it’s not about how many times you get rejected or you fall down or get beaten up, it’s about how many times you stand up and are brave and keep on going.