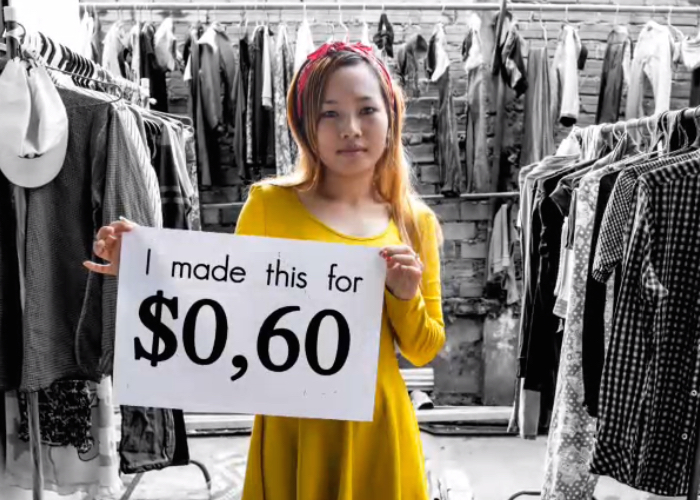 Ever wondered what a day in the life of a Cambodian garment worker looks like? Sweatshop – Deadly Fashion, an online miniseries produced by Norwegian newspaper Aftenposten in November 2014, aims to reveal just that by sending three fashion-savvy Norwegians to the other side of the world for an experience they’ll never forget. Five short episodes track Anniken, Frida and Ludvig, along with their Cambodian counterpart, a young factory worker named Sokty, as they step into the shoes of a Phnom Penh garment worker in an attempt to alter their perspectives on fast fashion.

More than 500,000 people are employed in Cambodia’s garment industry, earning on average just one-quarter of what the Clean Clothes Asia Floor Wage calculates to be an acceptable living wage in that country. Large-scale factories are a huge employer in Phnom Penh, attracting thousands of women from rural and regional Cambodia who relocate to the big city every year and go on to produce garments for foreign-owned companies including H&M, GAP, Levi Strauss, Adidas and Target.

The sweatshop is the epicentre of Cambodia’s garment industry, but it’s not until Episode 3 of this series that the Norwegian trio partake in a day’s work on the factory floor. At first, conditions appear good in the well-lit workroom, where workers are filmed breaking for a shared lunch. But as Frida soon reminds us, this is just one example of a factory: there are hundreds of varying quality in Phnom Penh, and most would never let cameras or prying eyes inside. Eventually, it’s the repetitiveness of sewing the same seam over and over that gets to Frida and her friends; the long hours and the effects of little sleep and little food (they refuse to eat most of the Cambodian lunch they are offered) adds up and wears them down.

The trio’s other escapades include spending a night in Sokty’s modest home to experience the sort of living conditions a small amount of rent can buy, and completing a challenge to feed a group of 10 people on an average workers’ wage of $2 per day (although this task neglects the fact that most workers survive on $2 for all their meals, and most don’t have the luxury of pooling wages with their friends). When the Norwegians take Sokty clothes shopping in a flashy retail store, the realisation that the people who sew clothes for brands like Mango can never afford to wear them strikes an unpleasant note.

After some brief coverage of the garment worker’s protests that have been ongoing in Cambodia’s capital since 2013, the final episode of Sweatshop sees the three Norwegians sit down with a group of female workers for a one-on-one chat. Stories of decades spent sewing the same fabric in the same factory day after day, and tragic tales of growing up in poverty and missed opportunities, are translated for the trio. It’s famed fashion blogger Anniken who appears most disturbed by the anecdotes, and she later vows to lead the charge back home and educate her friends and peers about what she’s seen.

Throughout the course of the series, it’s interesting to watch the trio’s prevailing attitude – “at least they have a job” – give way to a torrent of disbelief and eventually anger at an industry that seemingly traps its workers in unnecessary poverty to save on expenses. Sweatshop succeeds in personalising the issue and putting Cambodia’s fight for fair wages into perspective, but unfortunately there’s not enough time to explore the more systemic issues at play – how did these workers get here in the first place? Drawing comparisons between life in Norway and life in Cambodia is certainly a contrast of extremes, and sometimes Sweatshop mishandles the cultural subtleties. Still, this series provides a valuable first-hand account and indicates continuing interest in Cambodia’s struggles, raising more questions around worker’s rights and placing renewed focus on the big brands who exploit factory workers for their own gain.