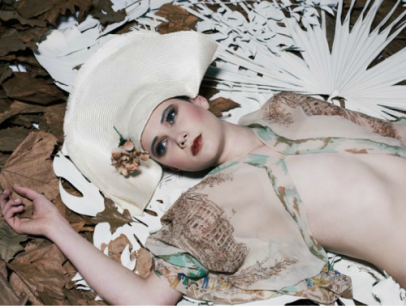 Although they’re seen as a rite of passage for every designer, runway shows are notoriously expensive to stage. But a good designer will find a way to make the impossible possible – or in this case, Pozible. The crowdfunding site is fast becoming the go to space for up-and-coming creatives to show their stuff, and it’s the site of choice for Project 3056. Comprising eight independent Melbourne designers (or, to be more exact, Brunswick designers, hence the postcode in the title), Project 3056 plans to stage a group fashion show during Melbourne’s prestigious Spring Fashion Week. They’ve got the designs (which just happen to all be ethical and sustainable, as well as innovative and unique), they’ve got the enthusiasm – they just don’t have the $5500 they need to put on their show. But that’s where you, the potential front-row-seat holder, come in. If you were thinking of attending any of the shows at MSFW, you’d be paying for a ticket anyway, so why not make it one where your ticket price really makes a difference? By “donating” to the group’s Pozible site, you’re not only securing a ticket to an independent runway show (when you donate $25 or more), you’re also winning the eternal gratitude of some future fashion stars. How many catwalk shows have you been to where good karma is included in the entry price?