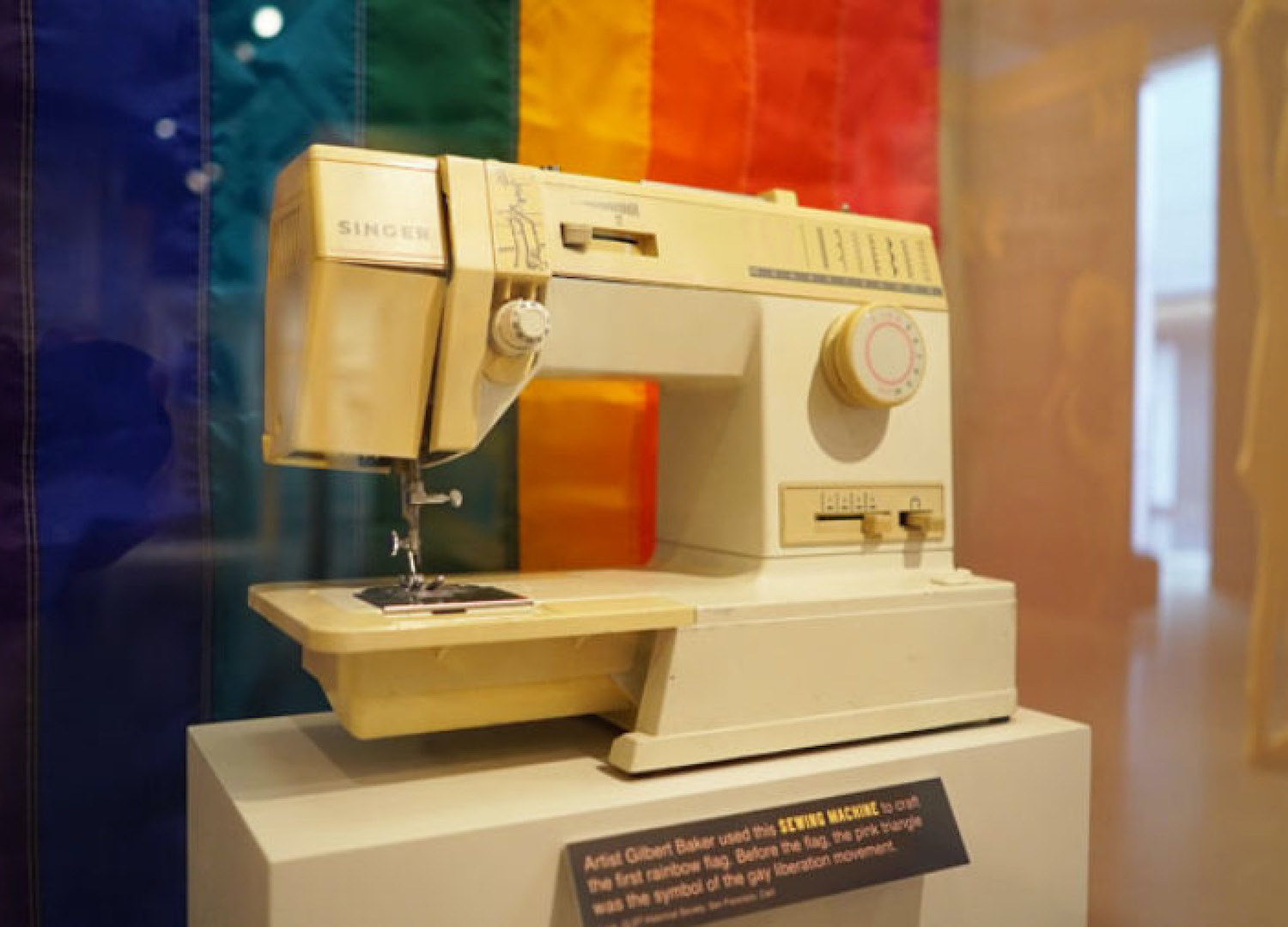 We may be living through a golden age for vexillographers (flag-makers) as the combination of divisive online discourse and the exploitation of rainbow capitalism means that every possible micro-variation of queer identity now have their own distinct flag. But despite this booming microcosm of gay graphic design, it cannot be disputed that there is no flag more iconic, influential, widespread and universally recognised than the OG Rainbow Pride Flag.

The Rainbow Flag was created in 1978 by Gilbert Baker, a queer artist, designer and political activist, self-described as the “Gay Betsy Ross”. 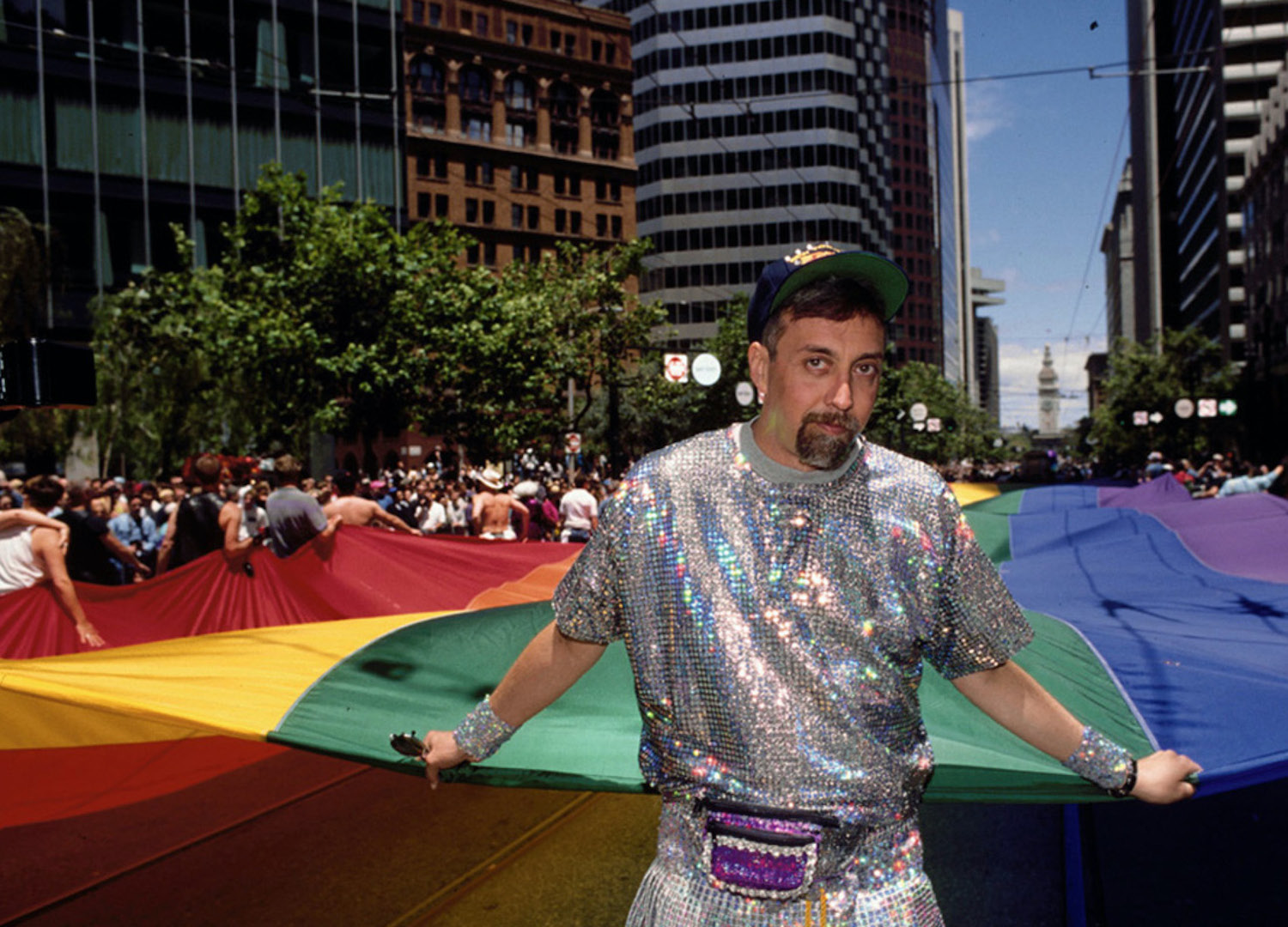 image GILBERT BAKER WITH PORTION OF THE MILE–LONG RAINBOW FLAG ON MARKET STREET DURING THE LGBT PRIDE CELEBRATION IN SAN FRANCISCO JUNE 18, 1995 PHOTO BY MICK HICKS.

Gilbert was born in a tiny rural town in Kansas – just like notable friend of the gays, Dorothy from Wizard of Oz – on 2 June 1951. He felt like an outcast in the conservative cloisters of his childhood where he was ostracised for his interest in art and fashion design, as well as his latent homosexuality. After a year of college, he was drafted into the US Army where he faced, quelle surprise, more severe homophobia. Electing to serve as a medic, Gilbert was stationed in San Francisco, which changed his life. In the thriving, post-Stonewall counterculture of the city, he found a home and community where he could live as an openly gay man.

After completing his military service, Gilbert remained in San Francisco to pursue a career in design. He used his artistic talent in his political activism – creating banners for anti-war and pro-gay marches and protests, as well as designing and sewing drag costumes for himself and his friends. 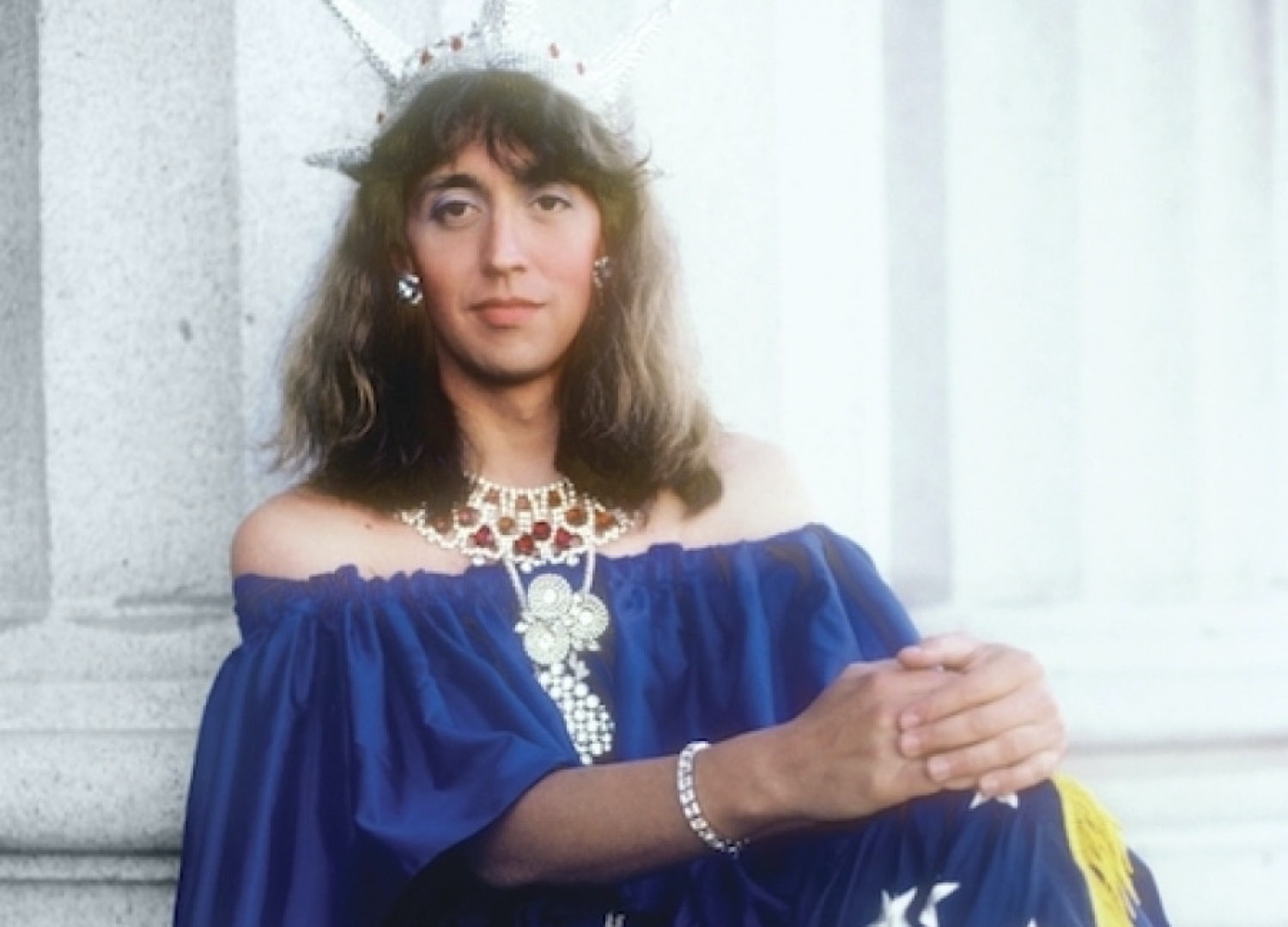 In 1978, encouraged by friends and colleagues, including San Francisco supervisor and Historical Gay Hero, Harvey Milk, Gilbert began thinking about designing a symbol to be used by the queer political movement.

“At this point, the pink triangle was the symbol for the gay movement,” recalled Gilbert in his memoir, Rainbow Warrior. “But it represented a dark chapter in the history of same-sex rights. Adolf Hitler conceived the pink triangle during World War II as a stigma placed on homosexuals in the same way the Star of David was used against Jews. It functioned as a Nazi tool of oppression. We all felt that we needed something that was positive, that celebrated our love.

“I looked at the flags flying on the various government buildings around the Civic Center. I thought of the American flag with its thirteen stripes and thirteen stars, the colonies breaking away from England to form the United States. I thought of the vertical red, white and blue tricolour from the French Revolution and how both flags owed their beginnings to a riot, a rebellion or revolution. I thought a gay nation should have a flag too, to proclaim its own idea of power.”

Later that week while dancing with his friend Cleve Jones at the Winterland Ballroom, inspiration struck.

“Everyone was there: North Beach beatniks and barrio zoots, the bored bikers in black leather, teenagers in the back row kissing. There were long-haired, lithe girls in belly-dance get-ups, pink-haired punks safety-pinned together, hippie suburbanites, movie stars so beautiful they left you dumbstruck, muscle gayboys with perfect moustaches, butch dykes in blue jeans, and fairies of all genders in thrift-store dresses. We rode the mirrored ball on glittering LSD and love power. Dance fused us, magical and cleansing. We were all in a swirl of colour and light. It was like a rainbow.

“A rainbow. That’s the moment when I knew exactly what kind of flag I would make.

“A Rainbow Flag was a conscious choice, natural and necessary. The rainbow came from earliest recorded history as a symbol of hope. In the Book of Genesis, it appeared as proof of a covenant between God and all living creatures. It was also found in Chinese, Egyptian and Native American history. A Rainbow Flag would be our modern alternative to the pink triangle. Now the rioters who claimed their freedom at the Stonewall Bar in 1969 would have their own symbol of liberation.” 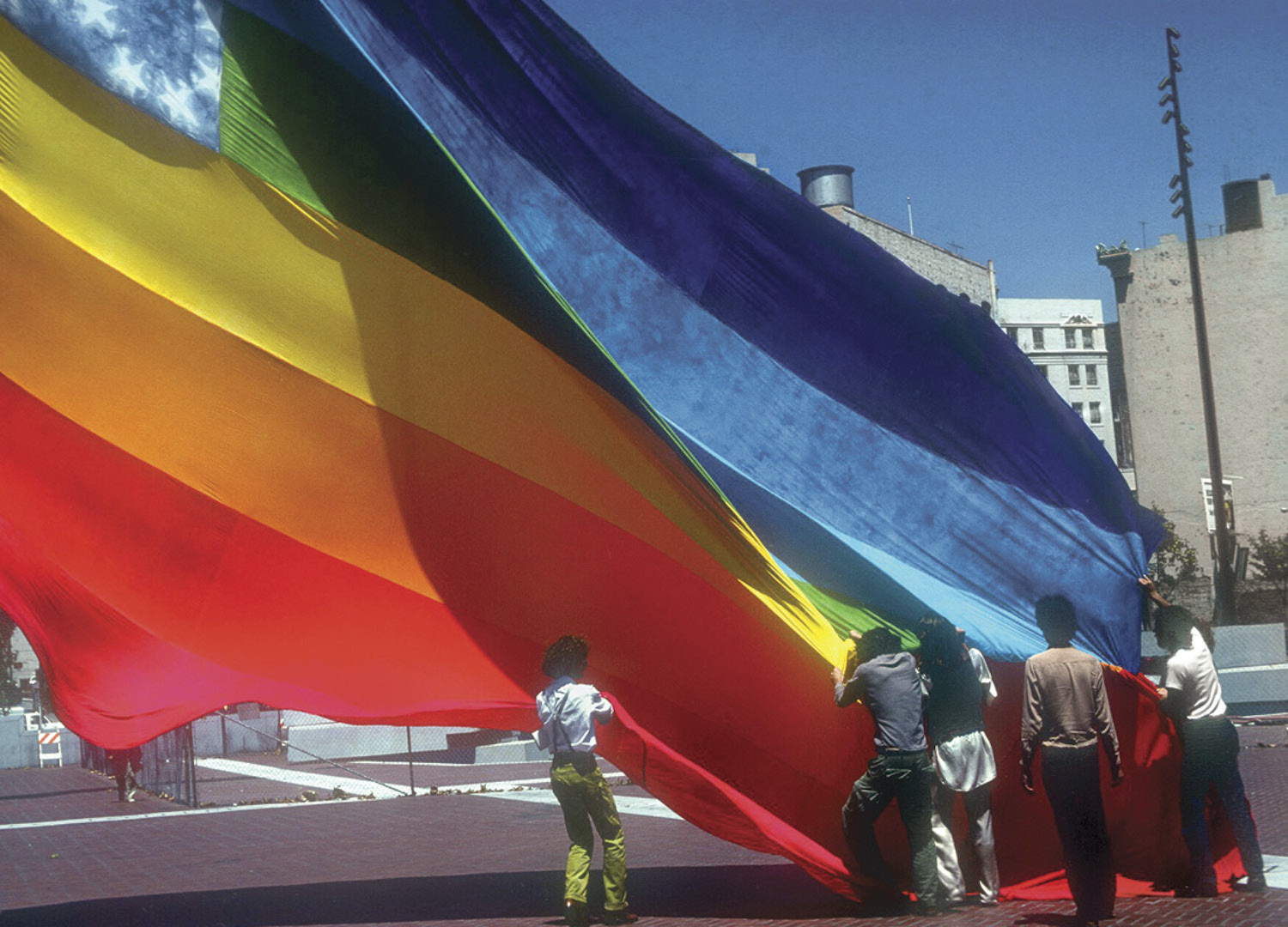 image GILBERT BAKER (IN VEST) AND COLLEAGUES RAISING ONE OF THE FIRST RAINBOW FLAGS AT UNITED NATIONS PLAZA IN SAN FRANCISCO 25 JUNE, 1978. PHOTO BY JAMES MCNAMARA.

The first rainbow flag was created over six weeks by Gilbert in collaboration with two other queer artists – Lynn Segerblom and James McNamara – and over 30 volunteers and was unveiled at the United Nations Plaza on 25 June, 1978, in celebration of “Gay Freedom Day”. The flag measured 40 by 60 feet and was hand-stitched and hand-dyed. Each rainbow stripe was a huge strip of cotton muslin individually dyed in large trash cans on the rooftop of a gay community centre – volunteers had to wear mittens to carry hot water up stairs and then a ladder. Today, Gilbert’s sewing machine used to create the original flag, a Singer no less, is a museum piece.

“We stood there and watched and saw the flags, and their faces lit up,” said Cleve Jones in an interview with New York Times, upon the event of Gilbert’s death. “It needed no explanation. People knew immediately that it was our flag.”

The original design featured eight stripes, each with specific meaning assigned to it. 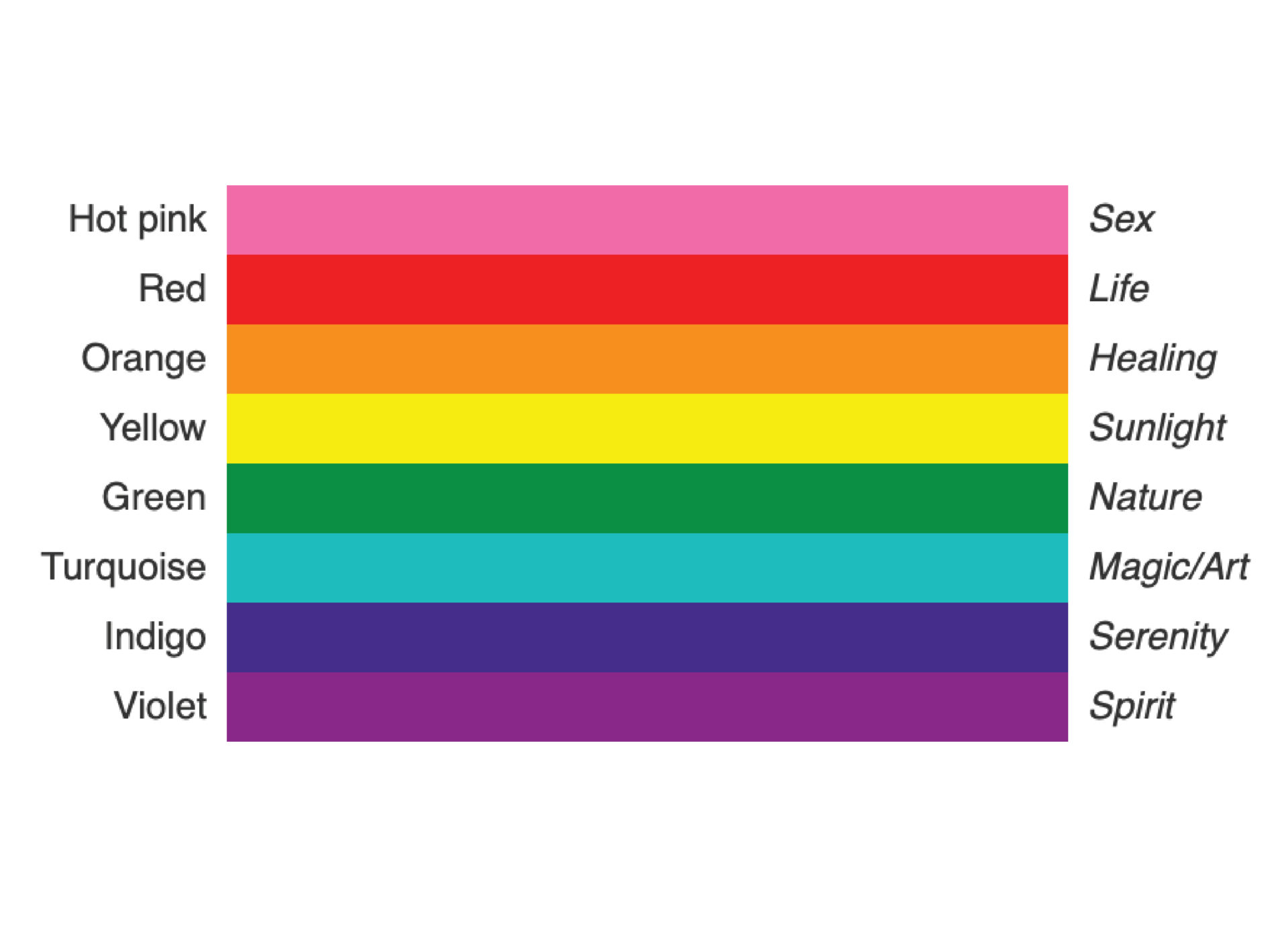 The initial reception of the flag was overwhelming popular and, particularly after the assassination of gay San Francisco City Supervisor Harvey Milk on 27 November, 1978, demand skyrocketed. However, various logistical and commercial concerns – the difficulty of sourcing hot pink fabric and the balance of an even number of stripes, the design was cut down to a standardised six stripes by 1979 which has largely remained the base template of the flag ever since – missing a little sex and magic. 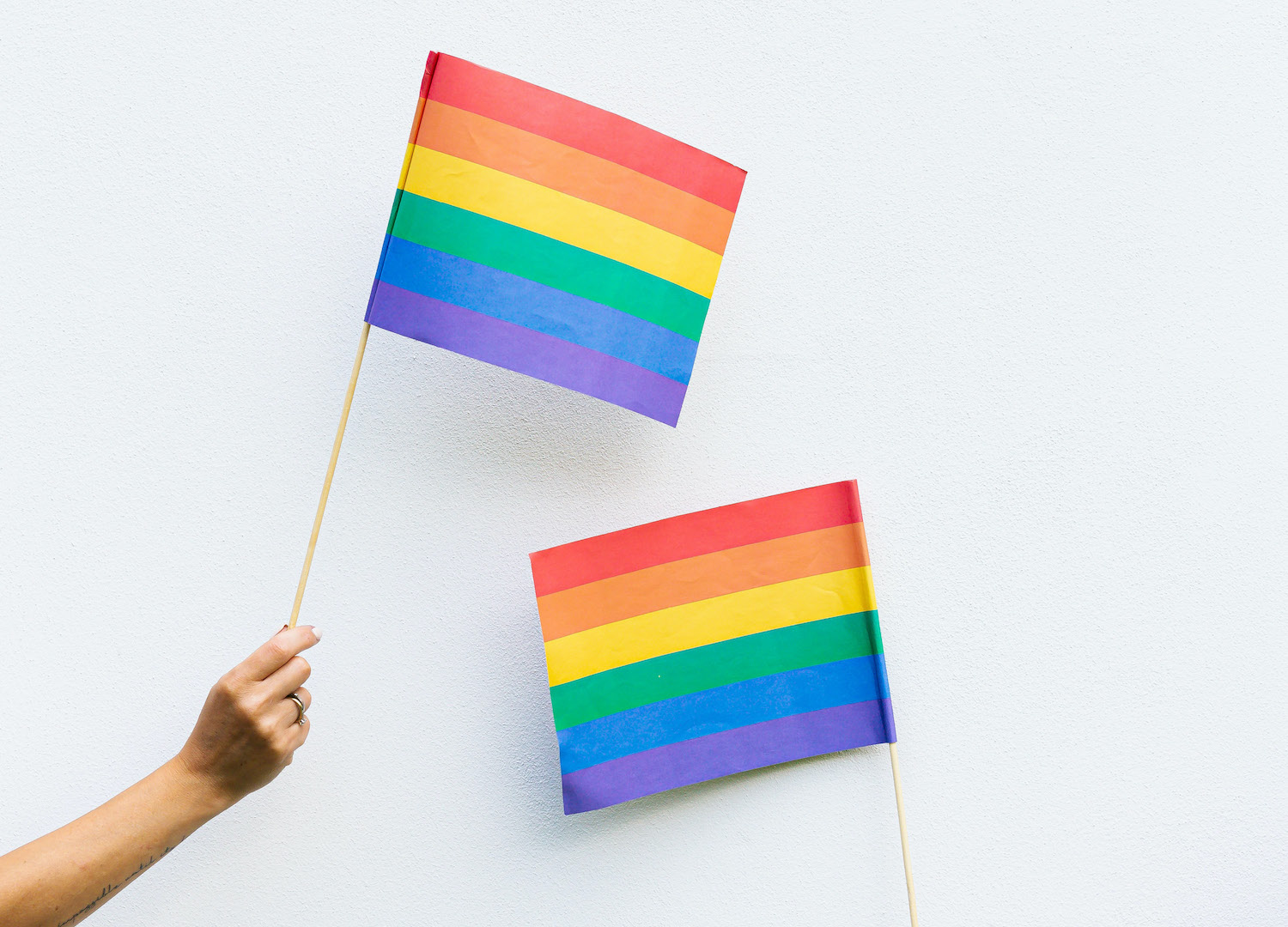 The ongoing legacy of the Rainbow Flag is incredible to consider. It transcends borders and nations, cultures and language to represent inclusion, equality, pride and love. It has been remixed, reconfigured and directly inspired the majority of ensuing pride flags. It has so thoroughly implanted itself into language of symbolism that anyone wanting to use rainbows for anything else has to accept the connotation of homosexuality or die mad about it. 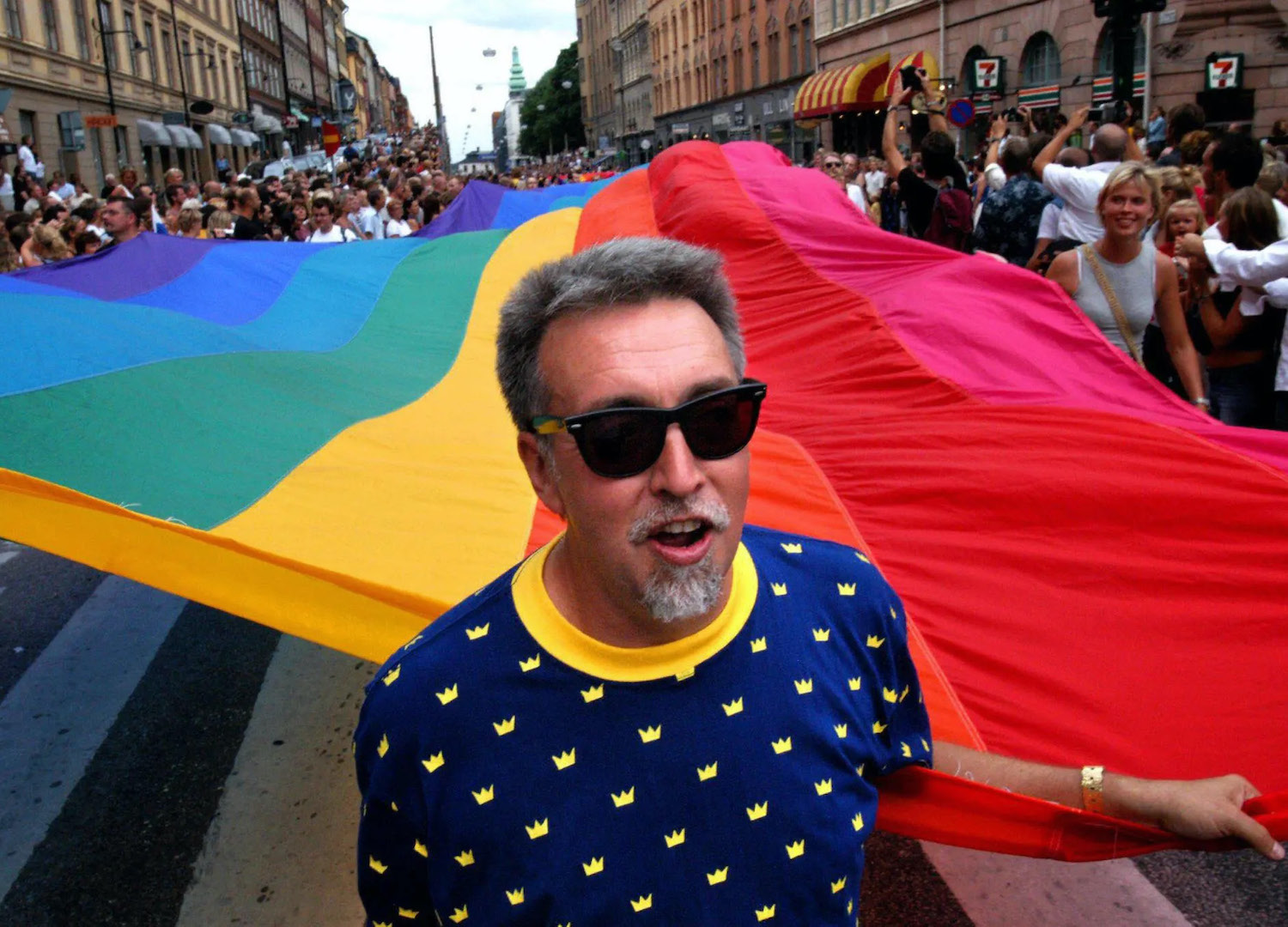 Gilbert, who died in 2017, aged 65, refused to apply for a trademark for his creation, which resides in the public domain.

“He purposely never copyrighted the flag because he wanted it to be owned by everyone,” said Cleve Jones. “I think he was overwhelmed with joy that this flag made by hippies in San Francisco had become a permanent worldwide symbol.”