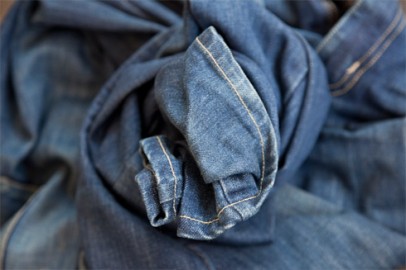 Housework really stinks, doesn’t it? There must be a million better things to do than vacuuming, cleaning the bathroom, doing the dishes and washing clothes. So the findings of University of Melbourne Masters student Tullia Jack are more than welcome. As part of her research into everyday cleaning rituals and how the care phase of a garment affects the environment, Tullia asked 30 people to wear a pair of Nobody jeans for three months without washing them in a project entitled Nobody was Dirty. The results? Tullia says the jeans don’t look dirty and they don’t smell bad, proving it’s not at all necessary to launder clothes as much as we actually do (according to Canadian researcher Josh Le, there’s not much difference in the bacteria found on jeans whether you wear them for 13 days or 15 months). But in case you don’t believe the research, the Nobody jeans from Tullia’s project are on display at the NGV Studio from March 10 – April 1 as part of the LMFF Cultural Program, so you can check them out for yourself.