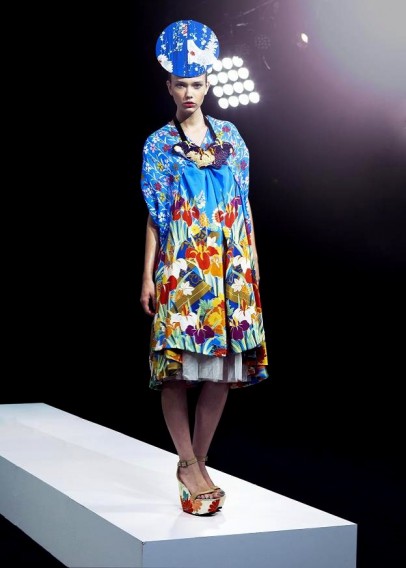 Akira presented a magical showcase on the last day of Fashion Week. And what a way to end a wonderful week! On show at the Box, models stood on low plinths surrounded by scattered lace and silk petals. A subtle soundtrack of twittering birds set a serene and ambient scene; a pleasant escape from the churning Fashion Week outside.

Akira personally led each model out, making sure they were presented precisely as he had envisioned. He mentioned thinking of “paradise” while designing his latest collection, and while this might sound like quite an ambitious theme, he gracefully succeeded in its execution. Three distinct collections were on display, the first being a bridal range. Elegant gowns were intricately adorned with embroidery and applique scattered in floral and whispy skyscapes. Cloud-like contorted fabric floated as headpieces, framing the models’ faces.

The second range hinted at Akira’s beginnings with Japanese-inspired prints, origami folds and layered patterns draped into simple silhouettes. The last plinth featured an array of colours. Intricate Shibori dresses were complimented with neckpieces reminiscent of glorious sea creatures. The attention to detail and ability to create such dramatic yet soft structures proved Akira is truly one of Australia’s fashion geniuses.

Akira’s return to Sydney fashion week was refreshing. As many designers are now relying more and more on digital printing, handcrafted details are featured less. Guests of Akira’s show stood in awe of the high level of skill involved in creating these outfits. Admiring the magnificent work involved from afar, I can only imagine truly feeling as though you had your own slice of utopia wearing one of these garments.

In an age overcome with fast fashion and new technologies, now more than ever we need to celebrate designers who still place importance on the slow and intimate processes involved in creating something truly unique and beautiful.