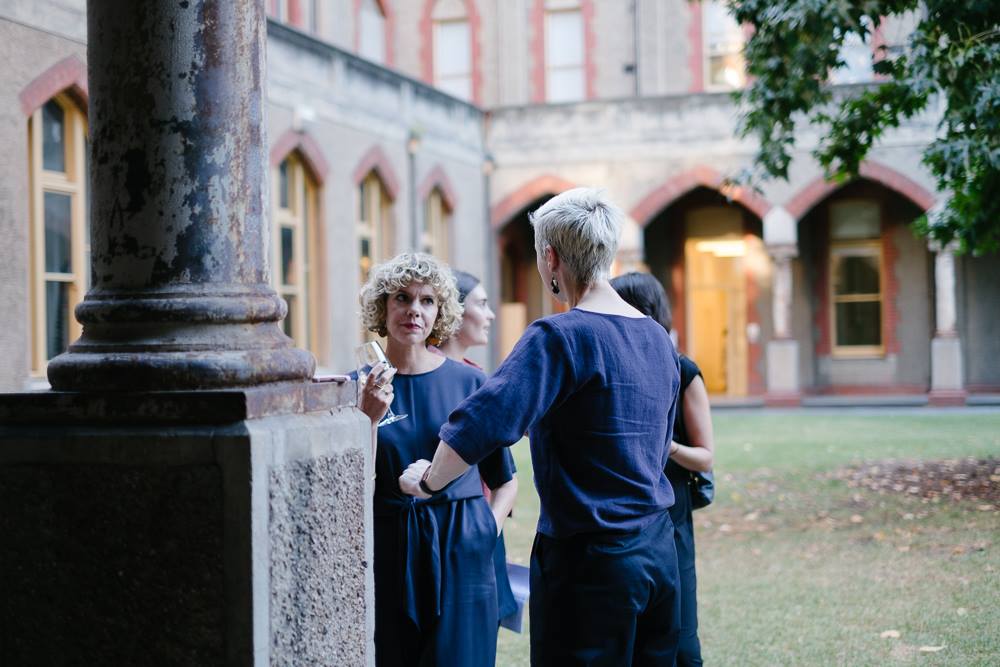 In the second instalment from Kuwaii’s Conversations – the VAMFF event where the label invited three writers to speak to an audience on the themes of clothing, emotion and memory – we hear from writer Peggy Frew, who from a young age found that what she wore could be used as a form of rebellion…

When I was in my first year of primary school a royal wedding took place on the other side of the world. Prince Charles and Lady Diana got married. This was a very big deal at the all-girls’ school I attended. It was in fact a big deal everywhere, but I didn’t know about that, since we didn’t watch much TV at home and my mother didn’t go in for women’s magazines.

‘Lady Diana is going to become a princess,’ said my classmates. This didn’t seem all that exciting to me. I didn’t mind princesses, but in the books I read they were usually the least interesting characters. I liked stories about animals. I also liked climbing, riding my bike, kicking the football with my dad, making potions in the backyard with kumquats from our tree. I’d quickly learned to keep the fact that I liked these things to myself at school, where the teacher told me that I was ‘unladylike’ and the other girls regarded me with suspicion. At school I felt like a foreigner, stepping haplessly into undetectable social traps, the safety of my homeland – Mum, Dad, my little sister, our house – far away.

To celebrate the royal wedding we were asked to come to school dressed as princesses, and on the chosen day a white tide of small girls entered the gates and frothed its way into the classrooms. I was not one of those girls. I did not have a flowing white dress, or a gauzy veil, or a padded satin headband crowning my symmetrical braids. My parents, in a bizarre act of vicarious rebellion, had dressed me not as a princess, but as a prince. Not Prince the musician – that would have made a whole other kind of statement – but just a prince, as in a male princess.

My parents took me out of that school after only one year. They hadn’t anticipated how strongly the school’s culture regarding gender roles would clash with the values of our family. And this event – in which I appeared as the solitary wearer of pants in that vast sea of dresses – I suppose exemplifies just how radical the mismatch was.

When I think back, I don’t recall how I felt about being the prince. I don’t recall being stared at, or teased, or asked, as I’m sure I was, ‘Why are you wearing that?’ All that I can remember, really, is the outfit itself. Red corduroy knickerbockers, long white lace socks, black patent leather shoes. A white shirt, a round, dark brooch at my throat, and a row of small medals on beautifully embroidered black and gold tape, pinned over my heart. On my boyish, shortish hair, a tinfoil crown. Through the belt-loop of my breeches a tinfoil and cardboard dagger. It was a fabulous costume.

If what we wear says something about who we are, then that wonderful outfit said: I am the daughter of parents who are looking beyond the princess as a role model for girls. Whether or not I wanted to be the public advertisement of my parents’ gender politics is another matter – and in fact a matter worth considering. Okay, it was probably not great at the time, and it’s possible that my lack of memory of the actual event is due to PTSD, but now, as an adult, I am very grateful to my parents for doing what they did. They were questioning conventions, and they were showing me that I had options in life other than being a princess, being pretty, being ladylike. Was I able to recognise all this at the age of four? I doubt it – but because the story lived on in photographs, and in retelling, I was able to develop an appreciation for its symbolism as I grew up.

The red corduroy knickerbockers have a kind of symmetrical bookend in the story of my education. By Year Twelve, my high-school friends and I were regularly op shopping our way around Melbourne and spending Sundays at the Camberwell markets. We weren’t being ethical when we bought second-hand clothes; we were simply broke, and into grunge. We were also into pushing back against what the world kept telling us we should be, as girls. And so I attended my Year Twelve dance in a sleeveless black silk shirt with jet buttons that belonged to my mum, a long, witchy skirt of black beaded lace, borrowed from a friend, and a second-hand pair of red and white Japanese sneakers. My mother’s silk shirt revealed my unshaven armpits. My friends and I arrived at the dance not with dates but together in a messy-haired mob, thrilling at our own edginess (it was easier in those days to be edgy), and prompting nervous looks from the ‘good girls’ in their Saba dresses and heels, and the tuxedo-wearing boyfriends lumbering dazedly in a fog of Lynx.

The residue of our parents’ values lies within us, welcome or not, and I think it’s entirely possible that had it not been for what those red knickerbockers and my splendid and lonely four-year-old cross-dressing moment stood for, I may not have sought out those excellent, non-conformist and decidedly unladylike high-school friends – my tribe, my shelter and my strength.

I continued to dress mostly in second-hand clothing throughout my twenties and thirties, simply because this was where the most interesting and well-made clothes within my budget were to be found.

When my children were born I bought almost all of their clothes second-hand too. I still do. There is just so much readily available, barely worn quality clothing for kids out there in op shops. Also, along the way, I’ve realised that it’s easier to find plain clothes in op shops, when you don’t want to dress your daughters in t-shirts that say ‘Daddy’s Princess’, or your son in camouflage emblazoned with tanks or flaming skulls.

I’m not sure when I became conscious of the ethics of purchasing clothes. It’s crept up on me in the same way that adulthood – and now middle age! – have. But also, looking back, I can see that it’s a natural extension of the kind of upbringing I had, in which material possessions were chosen carefully, with a view to quality, and the expectation of longevity.

It is hard – when all those consumer goods come bearing down in a huge, glittering wave that screams, ‘Fun, fun fun!’ and there are your sweet, wide-eyed children, saying, ‘Please, please, please?’ to always be the one who says, ‘Well now let’s just stop and think about where this plastic toy, or t-shirt, or nail polish, or something that might be lollies but could also be stationery in seven layers of plastic wrap and a box and more plastic wrap over the top of the box, let’s just think about where this came from, and what’s going to become of it once you’ve finished with it.’ It’s hard not to feel like, well, a bit of a killjoy.

But I can’t let go of them, those values – my grandparents’ thrift and caution, and my parents’ questioning of social norms – and so, when my fourteen-year-old daughter wants to go into the city with friends and spend money on disposable crap, I find myself following her to the door. ‘Did you know,’ I plead, as she sweeps out, all flying hair and earbuds, ‘that fast fashion is the second worst polluter after Big Oil?’ ‘Have you got a shopping bag?’ I call down the street after her. ‘Don’t let them give you plastic bags!’

It can feel like a full-time job, this imparting of values to my children – one I don’t get paid for. And it is tempting, sometimes, to give up. I mean, really how much fun is the person who leads a stomping, sighing child to the recycling bins and points, and says, ‘Now, do you remember where the scrunchable plastics go?’

And yet … What would I be without those values? They are me – they are my inheritance, and to be honest sometimes they’re all I have as armour against despair, in this world. They are the sheath to the blade of my cynicism, a sheath that magically appeared the day my first child was born, the day that hope became a moral obligation.

The stories told by clothes never end. Like stitches in cloth they rise again and again through generations, each marking new memories, each linked to the ones that went before. I think about those corduroy knickerbockers. I think about that shirt with the jet buttons. I think about my daughter borrowing my shoes, which she does now, this person who what seems like moments ago was a tiny baby. She goes to my wardrobe and she takes a pair out and she puts her feet – her feet, which will carry into who knows what kind of a future her glorious self (a self that is all new and all hers, but also at the heart of every one of its tiny cells shot through with bits of me) – she puts her feet into my shoes.