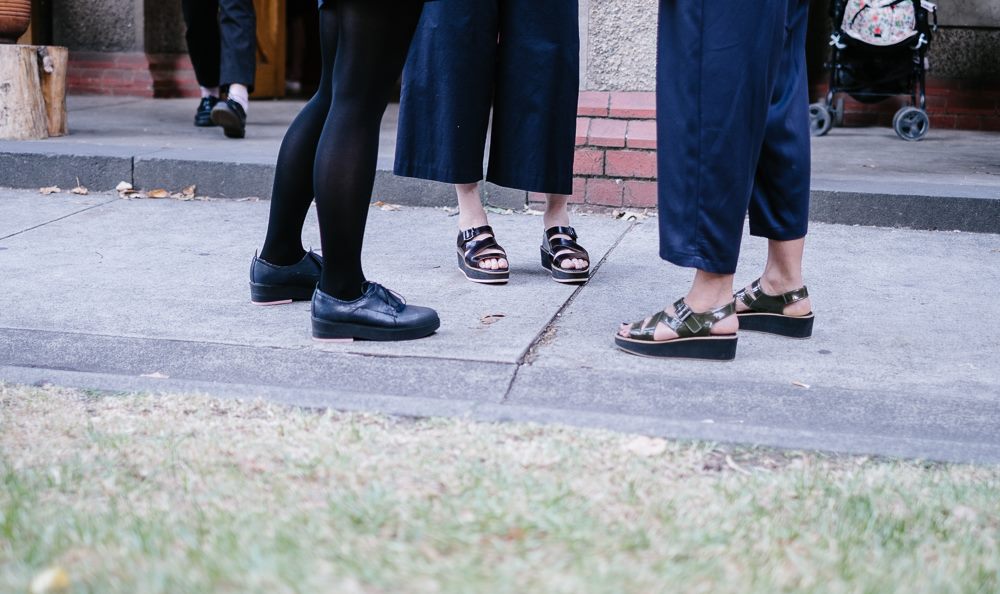 Catwalk shows are cool and all – but for this year’s VAMFF, Melbourne’s Kuwaii had a very different idea. Taking inspiration from the Women of Letters series, the label invited three writers to speak to an audience about the themes of clothing, emotion and memory, and the ways in which a simple piece of cloth can take on meaning. For singer-songwriter Lisa Mitchell, the event offered a chance to reflect on a coat that spanned generations.

I gave my Mum’s trench coat back to the universe through a square metal hole on the side of a busy London road.  It was one of those big Smith Family-style recycling bins for unwanted clothing. The coat had belonged to Mum back when she was pregnant with me. I was about to go back to Sydney, and luckily I’ve come to find the 24kg baggage allowance liberating. It forces you to ask yourself why you have something. So, up in the flat before coming down to the bins, I thought hard about whether or not to keep this coat.

As the name suggests, the trench coat came into existence because of a demand for a lightweight, water-resistant coat for World War 1 – apparently it was Thomas Burberry who pitched his winning design to the British military in 1905. But the history of this coat wasn’t confronting in the way I thought it would be. What I find most intriguing is why we wear military garments. Yes, the trench coat is very useful – it doubles as an extra blanket, a picnic rug, and something to cover amps and guitar cases with in someone’s car. But along with Doc Martens, bomber jackets, cargo pants, khakis and Ray Ban aviators, trench coats are a product of war.

So I wondered what it said about us as a species? What’s so attractive about military wear? And why did both Mum and myself choose this coat – it surviving every 24kg baggage allowance up till that final letting go?

There are the obvious answers – perhaps we want to be be strong and fearless like the archetypal warrior; and then there are the ergonomic reasons – it’s light and breathable like Thomas Burberry wanted. Also, despite it’s morbid origin, aesthetically is is undeniably elegant. I suppose if you have to go war you want to do it in style.

But the less obvious reasons are what I’m most curious about. We’re so lucky to be alive in an age when we are able to revel in clothing – to indulge in it and adorn ourselves. But what we wear can mean a lot. Singer and songwriter Erykah Badu once said: “how you wear your hair is a political statement.” And, of course, it’s the same for fashion. What are we holding close to us? Draping our bodies in every day? And what does this say subliminally to our closest friends and workmates? In choosing a trench coat, are we not choosing to treat life like going to war?  I wondered if war veterans shudder when they see a beautiful young woman in a long trench coat and heels crossing the road… Or do they feel uplifted and see it as a gesture of solidarity?

So anyway, back to the recycling bin on Kingsland Rd. I probably should’ve called Mum and asked her before I gave the trench coat away, but I felt at the time that she would have agreed. This coat had done us well. Two generations of well!  “All the better to let it go forth,” I could hear her saying. “No need to hold onto what’s weighing us down.” I probably should’ve called her.

The footpath felt like a battlefield that day and something that was meant to be simple was not. I tried to shove all the clothes into the bin but it was so full already that I had to leave my two fat overflowing bags next to the other bags, defenseless on Kingsland Rd.

What I wish I did, was to have had a moment with the coat before letting it go.

A moment that acknowledged all that the coat had been to us. I know I keep saying “us” – and while I can’t really speak on behalf of my Mum, I felt that somehow I was the trusted holder of this lineage that had accompanied us both through pivotal times in our lives – her first pregnancy and transition into motherhood, and my first solo music adventures in London as a teenager.

If I had of had a moment with the coat, on the side of Kingsland Rd, I think it would have looked something like this. Let me re-tell the giving back of Mum’s trench coat to the universe.

The traffic and bikes whirred past me, the pedestrians pacing confidently in both directions. I put my bags down, undid one of the ties and fished out the trench. It was a little pathetic-looking because of being crumpled, but it was long and classic nonetheless.  I shook it out, folded it a few times and – closing my eyes on the judgement of passers-by – I pressed it to my nose and slowly breathed in. I could smell…

Suddenly I was in the Cat and Mutton, a bustling pub on the end of Broadway Market in Hackney – only it was 9 years earlier. The jacket was folded and squashed among other jackets and bags and umbrellas on the ground between wooden chair legs. It was loud. My Irish pals were next to me and we were at a table with their mates. It was always a relief to see these friends. I’d probably just gotten off the train from the other side of London where I was recording my first album. I was welcomed into their little student family, and their kind accents and lack of careers were a welcome relief to me. I remembered the kinship we shared – outsiders, navigating a huge city of cities. I felt a growing pressure from my first album, and I was eager to prove myself. The coat was with me then. It is interesting is it not, this link between myself and my mother? That the first time I wore the coat it was on her skin, the second it was on mine.

Back on the street, I looked down at the coat again. It was awkward still, even in the hypothetical. I aimed for a different patch of beige, and closed my eyes again.

She said everyone in the late 80s wore it. It was February 1988 when she’d walked into a Marks & Spencers in Canterbury, another city in the UK a few hours south of London. She was fresh off the plane from Shepparton (via Melbourne) and freezing in the only cold weather gear that Melbourne offered at that time of year. Dad had found a placement in Canterbury Hospital and so this was to be the birthplace of their first child. Me! As I stood there next to that clothing bin, it hit home for me what this coat had carried my mother through. This was the eve of parenthood! The long goodbye was being said to life with just two. And this was the coat she chose.

I stood beside the bin. I knew that I was ready to let it go. That I didn’t want to treat life like a warzone anymore. I felt afraid for a moment – did I need to be protected? But as Arundhati Roy says, “Another world is not only possible, she is on her way. On a quiet day, I can hear her breathing.”  I took one last nose-press-inhale, opened the hatch and didn’t hear a thing. Just as Thomas Burberry would’ve wished. I imagined the coat lightly falling back into the welcoming darkness of the universe.

We’re so lucky to be alive in an age when we are able to revel in clothing – to indulge in it and adorn ourselves. But what we wear can mean a lot.