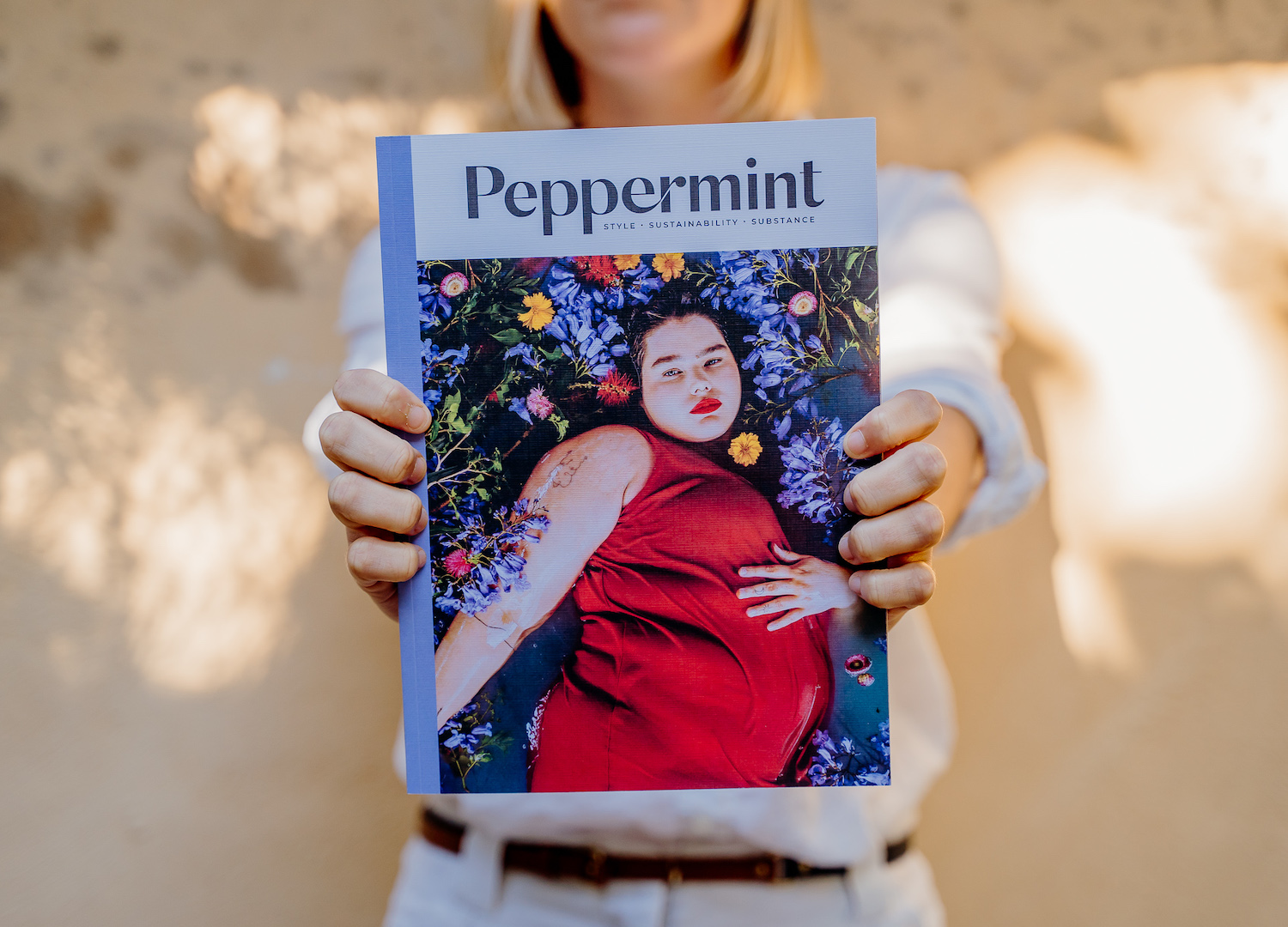 Featuring a diverse range of bodies has always been a central part of Peppermint’s ethos. Pick up any issue and we hope you’ll find within its pages a reflection of what the world truly looks like: a mix of bodies, faces, ages, races.

But to create the cover for Issue 52, our team wanted to make something we felt was both rare and also sorely needed: a shoot with a plus-size model that saw her as more than her body, that centred and celebrated her form but also normalised it as exactly what it was – the body of a professional model doing great work.

Our concept was clear: a person floating in a lush bath of native flowers. The mood: relaxed and serene. The Peppermint team set about solving some of the logistical issues of photographing in water (and there were many!) and then the rest was up to our model.

We were thrilled to work with the ethereal Tegan Lewis from Brisbane’s Busy Models. Tegan met all the challenges we threw at her – including looking calm while immersed in a lukewarm baby pool for hours! – and helped us make this beautiful cover.

As representation for plus-size people in the media and fashion world grows, so too does the debate around it, even within our own social media comment section. While it’s not a simple issue and never black and white, it’s always been important to us to champion diverse bodies and voices. Here we speak to Tegan about her own experiences modelling as a plus-size woman. 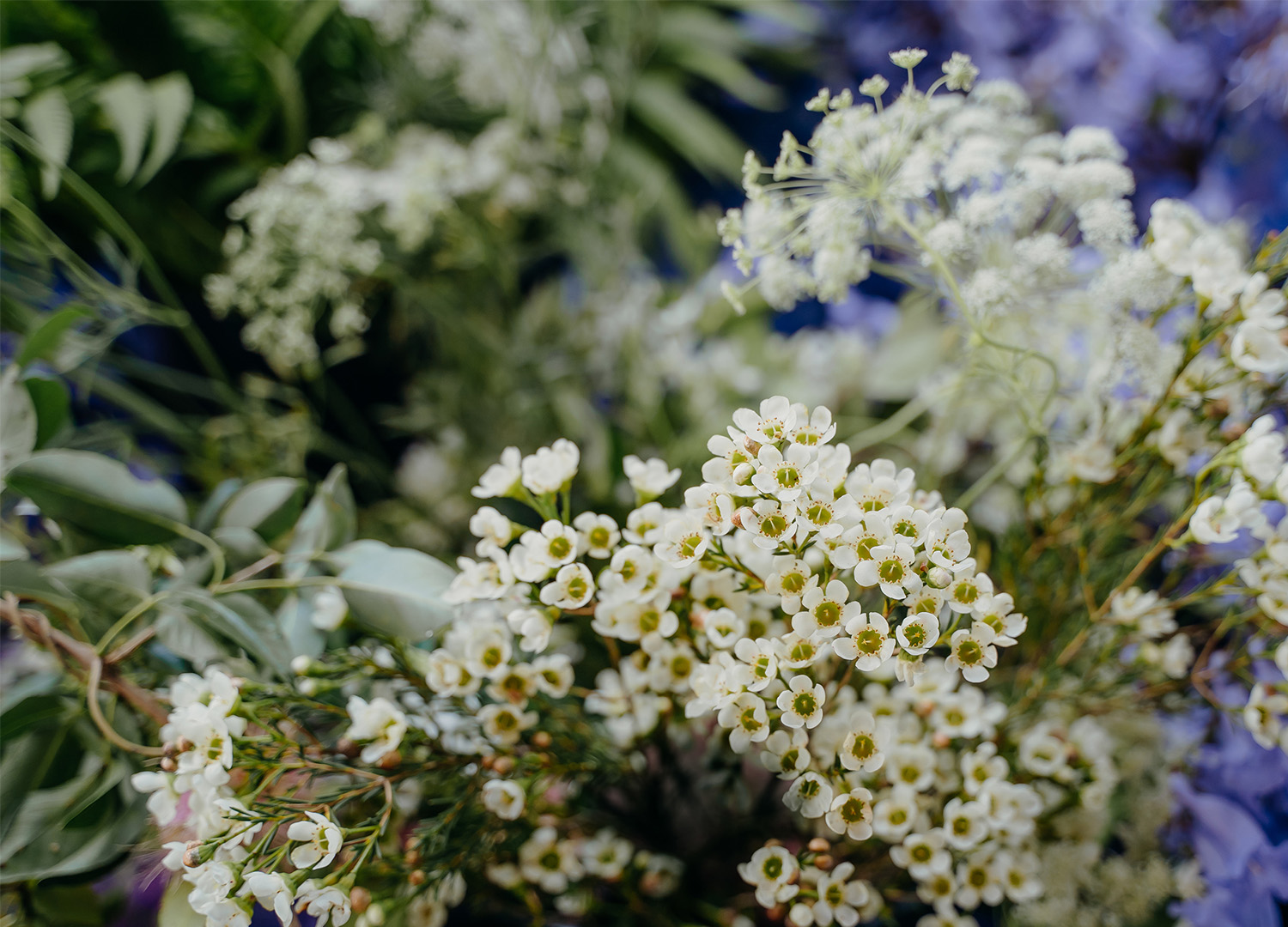 A Blooming Beauty – Our New Summer Issue Is Here!

What sort of magazines did you grow up looking at?

I grew up going to the local Woolies with my mum and begging her to buy me the latest Total Girl magazine. I would get each monthly edition which always featured an “it” girl of the 2000s; people like Selena Gomez, Demi Lovato or Miley Cyrus as Hannah Montana. I lived and died for the juicy sealed section.

What made you decide to start modelling?

Modelling was never something I set out to do. It’s not something I could even fathom for myself growing up. I have always been the biggest girl in the room. When I got scouted through Facebook, I was 18. An agent had invited me to walk in a runway show and, honestly, at first I thought it was a scam. I replied: “I don’t think I’m what you’re looking for.” I explained I was probably larger than I looked online and I didn’t want to waste their time. I was surprised and terrified when they said they didn’t care, they wanted to see me anyway! 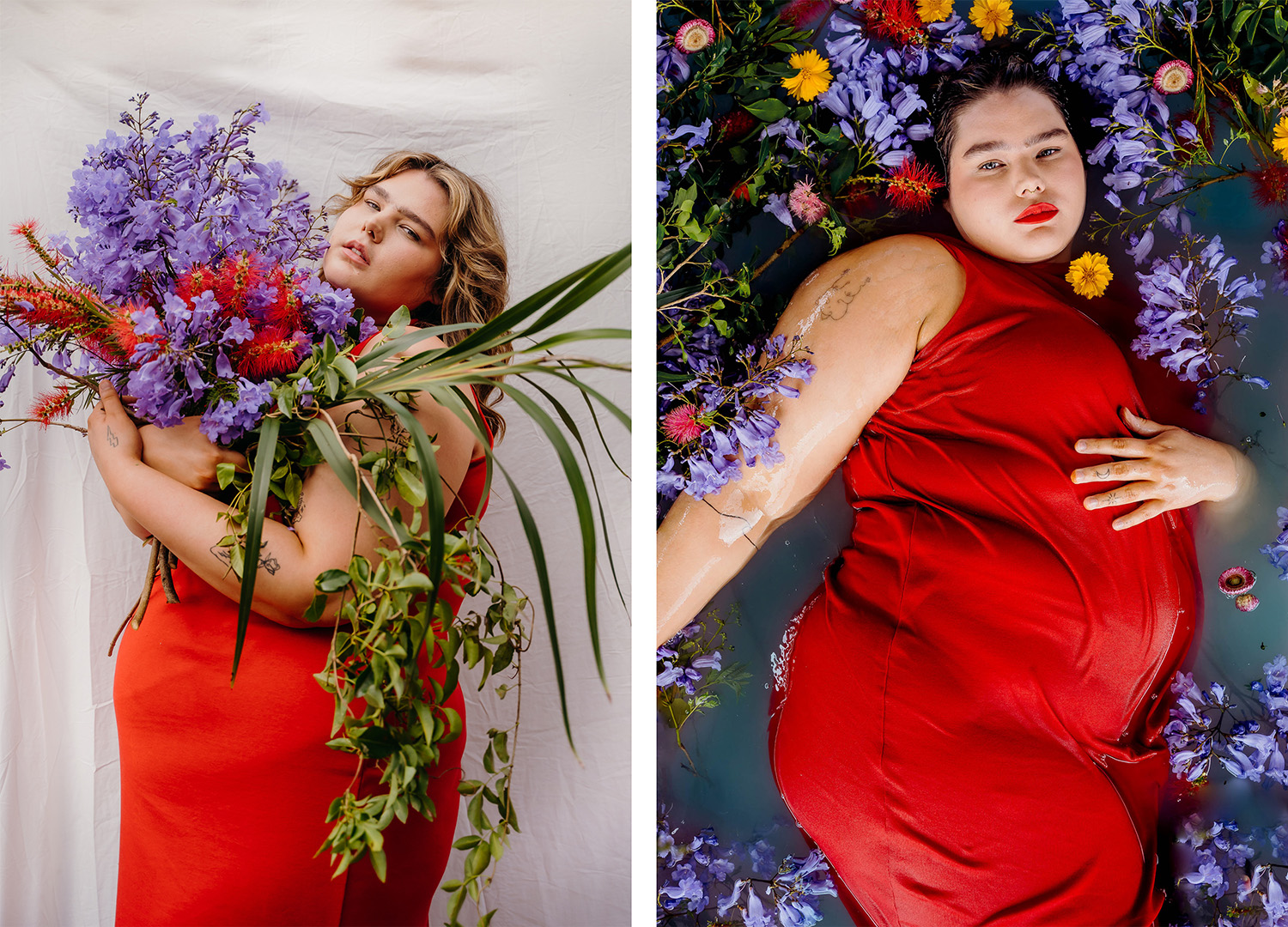 What sort of response did you get when you started?

I was first set up with an agency that really believed in me and took the time to help me. But in my first meeting with another agency, I was rejected. They told me I was too big to book any jobs in Brisbane and there was no point. I think after that I started to doubt myself again and stopped focusing on modelling because I felt that there would be nothing for me.

It wasn’t until I booked a campaign on my own, without an agency, that I started to believe again that I could create the space I wanted to see in this industry. For this job, a brand flew me out to be in a diversity campaign, in which none of the clothes in their biggest size fit me… I had to pick something stretchy and drapey from the archives. I was so mortified and embarrassed standing next to nine other models all in the current collection. It just went to show that there is often such a lack of thought put into having and holding real inclusive spaces.

Since then I have had so many mixed experiences. I have been the largest model to be signed to two agencies in Brisbane and felt celebrated for it, and also had my fair share of rejection.

Do you think there has been a shift in the industry recently in terms of representation of more bodies?

I think there has definitely been a shift in the right direction. It’s overdue and barely begun but it’s exciting. We’re seeing real plus-sizes being signed as talent, and it’s leaps and bounds from even a few years ago. But as we go forward I get hungry for more. I want to see big bodied people walking runways, I want to see plus-size models that actually wear plus-size clothing!

Are there ways in which you think being a plus-size model has given you an advantage in the industry?

Yes, the power I hold! I think being 6’1 and a size 22 has always helped me to stand out whether I wanted to or not.

In my first runway show, I placed top five out of 50 and was the only curve model to place at all. I think the fact that there are significantly less plus-size models definitely opens a market for me. But even more so, as the industry changes and continues to change, agencies and brands will need to jump on the train or get left behind. I know that they need me more than I need them. I definitely don’t think my modelling experience has been easier than that of a straight-size model – jobs for me are few and far between and maybe I would be more “successful” if I had a different body – but my work in this world isn’t to book the most jobs. 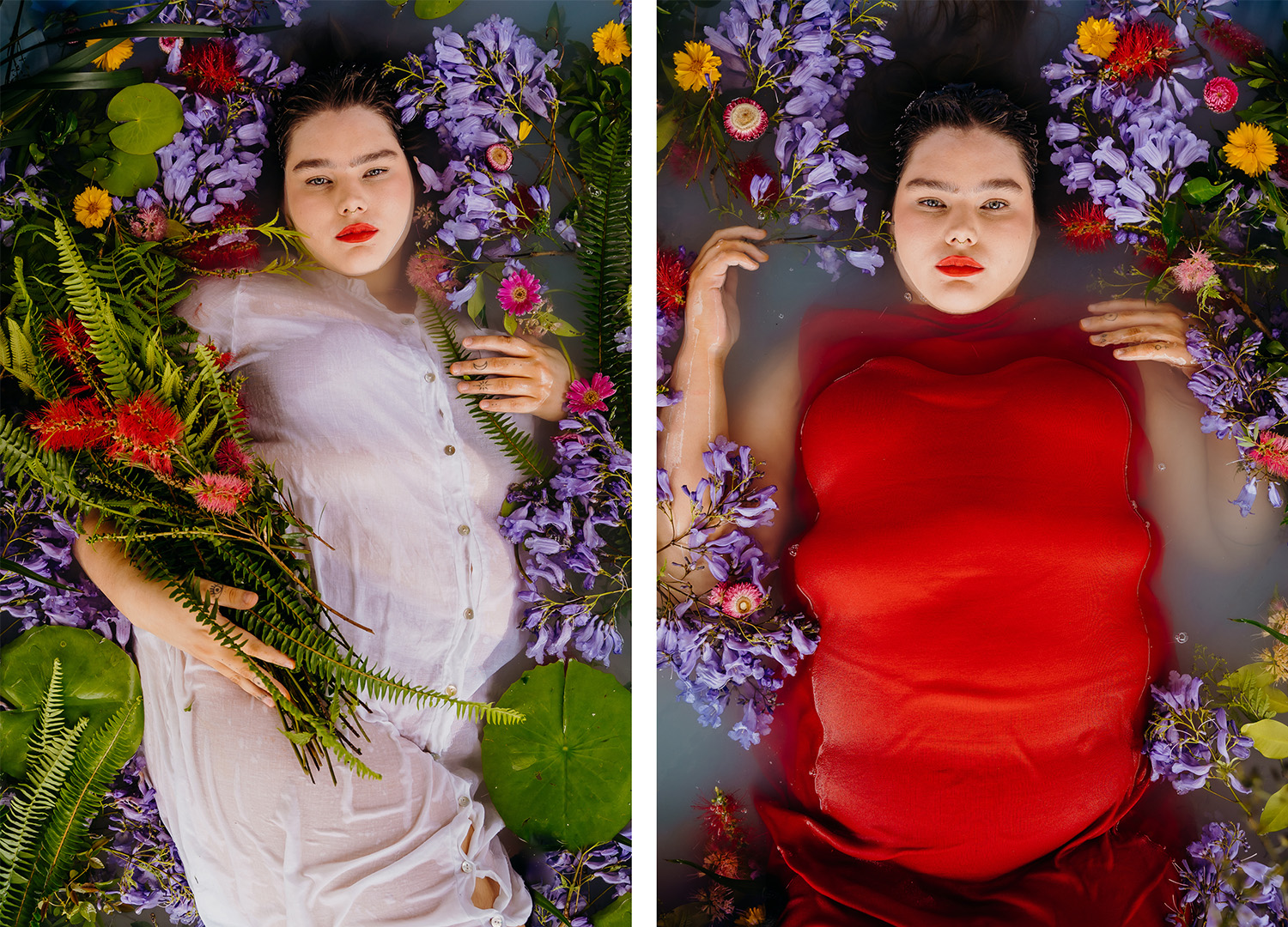 Can you describe the Peppermint cover shoot from your perspective? What was exciting or unexpected about the shoot?

The Peppermint cover shoot has been my favourite job so far hands down. I got some vague notes from my agent about waterproof makeup but I had no idea, walking onto set that I would be submerged in an inflatable pool, swishing around with the most gorgeous wildflowers. I immediately felt like I was in safe hands with a team of kind and creative women but it was affirmed to me during a little moment where I heard a voice say: “Make sure it doesn’t look like we’re trying to cover her body.” I don’t think I’ve truly ever been made to feel so comfortable to just let go and work. I didn’t feel like an attraction or an anomaly, I just felt like a model.

Can you talk to us about why this cover feels important to you, both personally and professionally?

This cover means everything to me and will live on my coffee table forever. I can’t recall the last time I saw a fat body celebrated, decorated and highlighted the way Peppermint has with this issue and it’s my greatest honour and achievement to date. I think about any plus-size person just stumbling across it and even if they only see it in the corner of their eye for a second, I hope it influences the way they feel about their body. They deserve to be seen. To decorate themselves and their body and to be celebrated. They deserve to take up space. 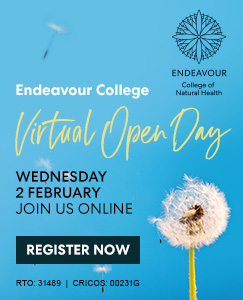