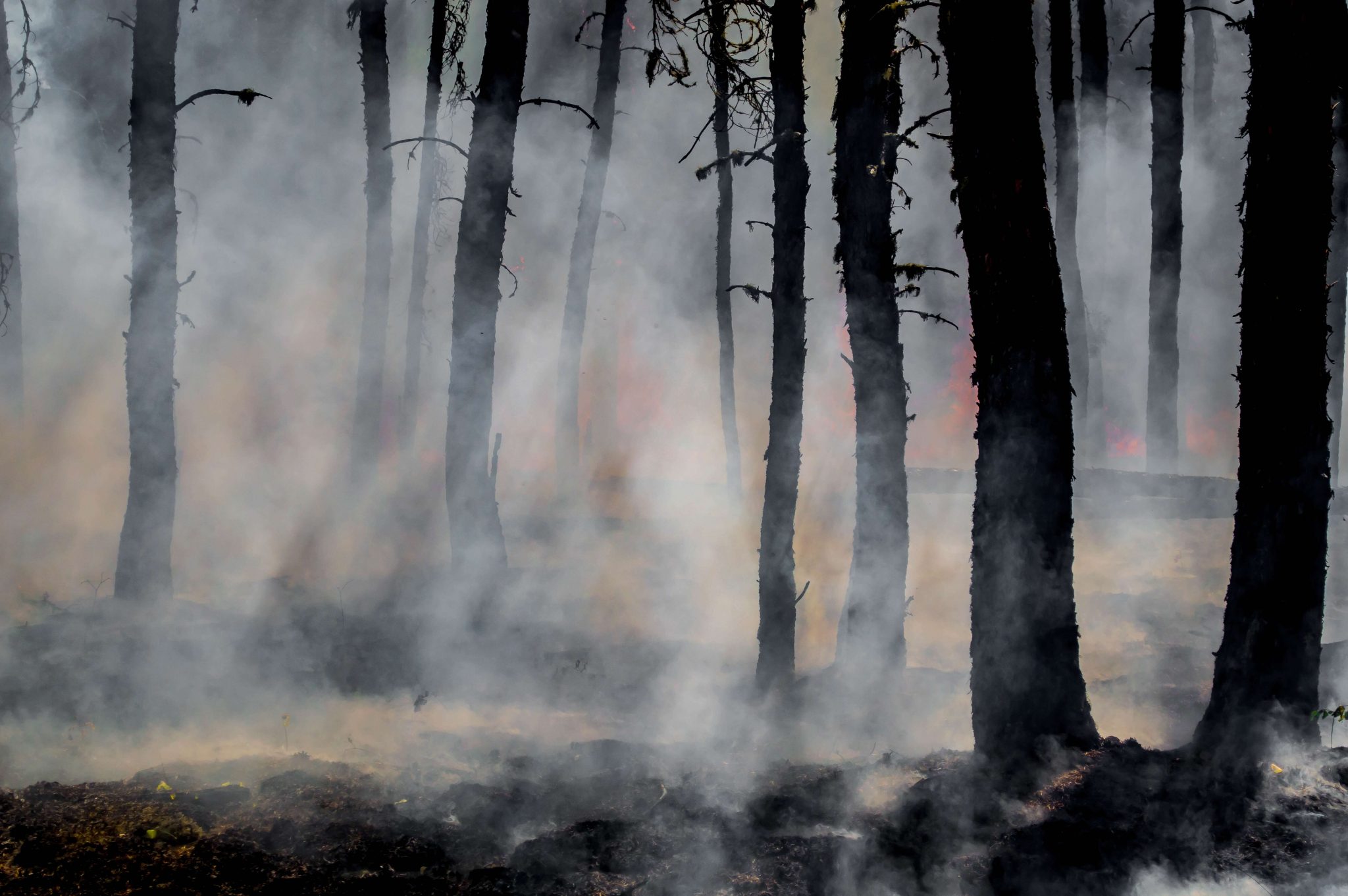 It’s taken the worst fires in a decade for the world to finally realise the Amazon is in trouble.

Visions of the forest ablaze, smoke plumes covering half of Brazil, are a searing emblem for what has otherwise been a largely invisible issue. It’s no longer possible to ignore what’s going on in the world’s biggest tropical rainforest. Fires have plagued the Amazon for years – and the more we learn, the more we realise the inferno is a symptom of a much bigger problem.

What exactly is happening in the Amazon?

As of this week, there are approximately 2,500 active fires burning in the Amazon rainforest. Between 75,000 and 156,000 individual blazes have been spotted so far this year – an 80 percent increase on the same period in 2018. The only real way to comprehend the scale is by using satellite images taken from space [image from NASA, below]. In early August, NASA reported a surge in ‘large, intense, and persistent’ fires in the area. It has since confirmed that this is the highest number of fires seen since 2010. 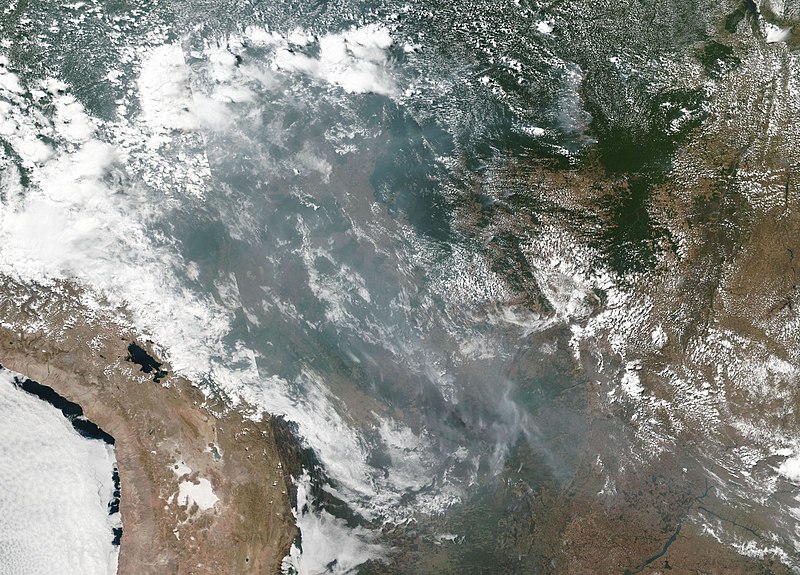 Fire has become a part of life in the Amazon. But it’s not a natural phenomenon for this delicate ecosystem. Mahogany, palm and Brazil nut trees are not prone to fire, and the forest floor is far too moist to spontaneously ignite. Fires that threaten the rainforest are almost exclusively intentionally lit – that is, started by humans.

Who would light a fire in the Amazon? The majority of blazes can be traced back to farmers and ranchers. Slash and burn agriculture, where fire is used to cleanse freshly felled ground and promote soil regeneration, is the number one source of deforestation in the Amazon basin and a major cause of forest fires. It’s no coincidence that most of the blazes currently raging are concentrated around pockets of cleared farmland and roads.

Brazil, the country responsible for stewarding 60 percent of the Amazon, has been thrown into the spotlight. Neighbouring Bolivia, Peru and Paraguay also shoulder some of the burden, and some of the blame. Questionable forestry policies and failure to respond to this national crisis has drawn the ire of the world’s media. It came to a head during the recent G7 summit in France, when the Brazilian President turned down an offer of foreign aid to help bring the situation under control. Last week, the country launched a military operation to extinguish the fires. But with 5.5 million square kilometres of dense rainforest to contend with, progress is slow. The world continues to watch and wait for updates on the fires and the damage they have wrought. But we must also start grappling with a more pervasive issue: Deforestation.

Deforestation is a massive problem in the Amazon, and it’s only getting worse. Without land clearing and cut and burn, fires of this ferocity and size simply wouldn’t exist. Since the beginning of the year, the Amazon has been stripped of an estimated 3,400 square kilometres of forest cover. That’s 40 percent more than the same period for 2018. The correlation is clear: As mining, logging and industrialised agriculture ramp up in the Amazon, deforestation escalates dramatically. Many fear that this year’s trend has all but reversed previous efforts to regenerate the basin.

With every square mile cleared, the Amazon inches closer and closer towards becoming a seasonal forest or even a savannah. Aside from the obvious loss of habitat, a complete shift in the ecosystem would have a devastating impact on biodiversity. One out of every 10 species on Earth dwells inside the Amazon and depends on its particular cycles for their survival.

One of the Amazon’s greatest gifts to the planet, its ability to soak up carbon dioxide, is also dwindling. In the 2010s, the forest’s C02 absorption capacity declined by one-third. If the Amazon were to be completely wiped out, an estimated 80 to 120 billion metric tonnes of carbon already stored in the trees would be released into the atmosphere, creating a climate catastrophe equivalent to a decade’s worth of greenhouse emissions all at once. Scientists now believe we are edging closer and closer to this critical tipping point.

As the fires rage on, the area has become almost unliveable for the 30 million people who dwell inside the Amazon. This includes the many indigenous tribes who live off the land. Losing the Amazon also means losing their ancient cultures, customs and knowledge.

What’s fashion got to do with it?

Much of the deforestation that goes on in the Amazon is done to create pasture for cows. Brazil is the world’s top beef exporter and the world’s second-largest beef-consuming nation. According to some sources, 93 million acres or 12 percent of the Amazon has already been converted into farmland.

The connections between the cattle industry, deforestation and environmental catastrophes like the fires we’re seeing now have long been understood. Back in 2009, Greenpeace released ‘Slaughtering the Amazon’, a damning report that cast commercial cattle production as the culprit in the destruction of the forest. Back then, the cattle sector accounted for 14 percent of the world’s annual deforestation and a full 80 percent of deforestation in the Amazon.

For the first time, the fashion industry was implicated in the destruction of the Amazon

One of the report’s biggest bombshells was the revelation that raw leather used by some of the world’s most prominent fashion brands was being supplied by the same Brazilian beef companies. For the first time, the fashion industry was implicated in the destruction of the Amazon.

In 2013, partly in response to the Greenpeace Report, Gucci became the first brand to launch a line of ‘zero-deforestation’ handbags. A collaboration with Livia Firth’s Green Carpet Challenge and the National Wildlife Federation, the collection used leather sourced from Rainforest Alliance Certified cattle farms. But tracing raw materials all the way back to the ranch is not easy. Sadly, few brands have followed suit. According to Fashion Revolution’s 2019 Transparency Index, only 5 percent of labels are in the business of disclosing their raw material suppliers. Similarly, the 2019 Ethical Fashion Report revealed that only 8 percent of surveyed brands bother to trace their raw material suppliers.

Brazil is still one of the biggest producers of prepared leather, exporting well over 40 million hides every year. Since the news first broke, many people have been contrasting the world’s response to the fires in the Amazon with the blaze that engulfed Notre Dame Cathedral in Paris earlier this year. It was Fashion Revolution who this week pointed out the irony: The same luxury fashion houses who pledged to finance the cathedral’s restorations simultaneously depend on the destruction of the Amazon for their leather. Deforestation and our relationship with the land is an issue that will continue to smoulder away even after the last flames have been extinguished. We all have a stake in the future of the Amazon rainforest.