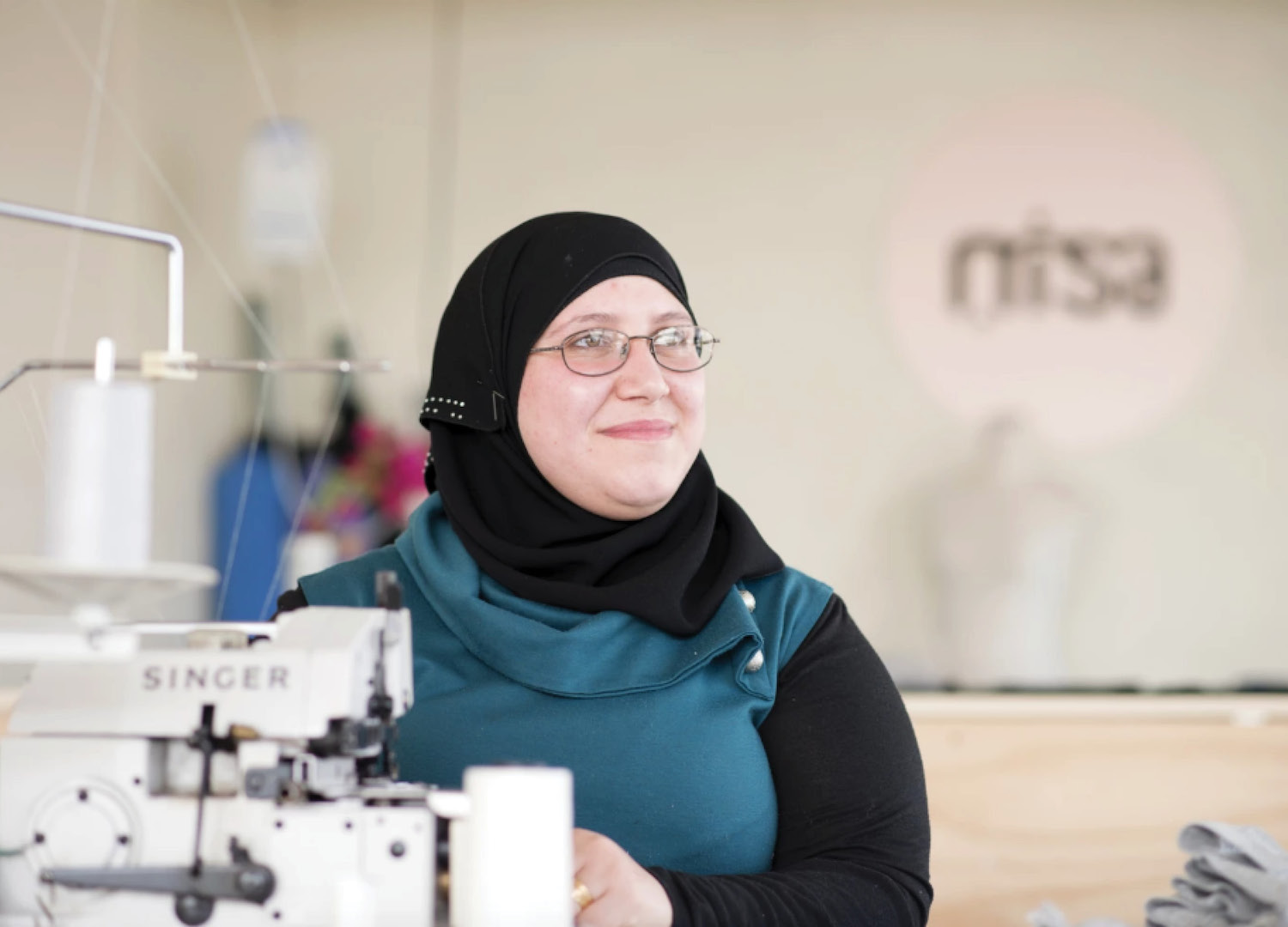 You don’t have to look far to find fast fashion brands aligning themselves with social causes. And one such cause that generally comes around with International Women’s Day is a focus on female empowerment, often communicated via selective model diversity and t-shirt slogans (#loveyourself).

But one thing that isn’t discussed is the way women are disempowered by the sheer existence of these same brands, 365 days a year. Here, Brittanie Dreghorn, of Britt’s List, unpacks why these fashion brands promoting feminism should first look at their own supply chains.

Fast fashion is a feminist issue

It’s estimated that of the global garment-making workforce, 80% of the people who make our clothes are women. The UK-based not-for-profit organisation Labour Behind The Label says: “This is not by chance, but the result of gender discrimination which runs through the industry. Women are desirable in the garment industry because employers take advantage of cultural stereotypes – to which women are often obliged to adhere – that portrays women as passive and flexible.”

Some of these environmental conditions, which women in these circumstances have little to no control over, include sexual assault, being forced to take painkillers and contraceptives and, in extreme circumstances, workplaces that are so unsafe that they literally crumble to the ground or catch fire – in some cases claiming the lives of the garment workers.

So how can we really empower women?

Workplace abuse and a basic level of safety aside, if we’re going to address the issue of female empowerment and gender equality globally, women need to be educated and they need to be paid enough to help change their circumstances.

As it stands, what female garment makers take home in their pay packets at the end of a gruelling month – where days easily stretch 12 hours and weeks are lucky to include a day off – is keeping them in poverty. 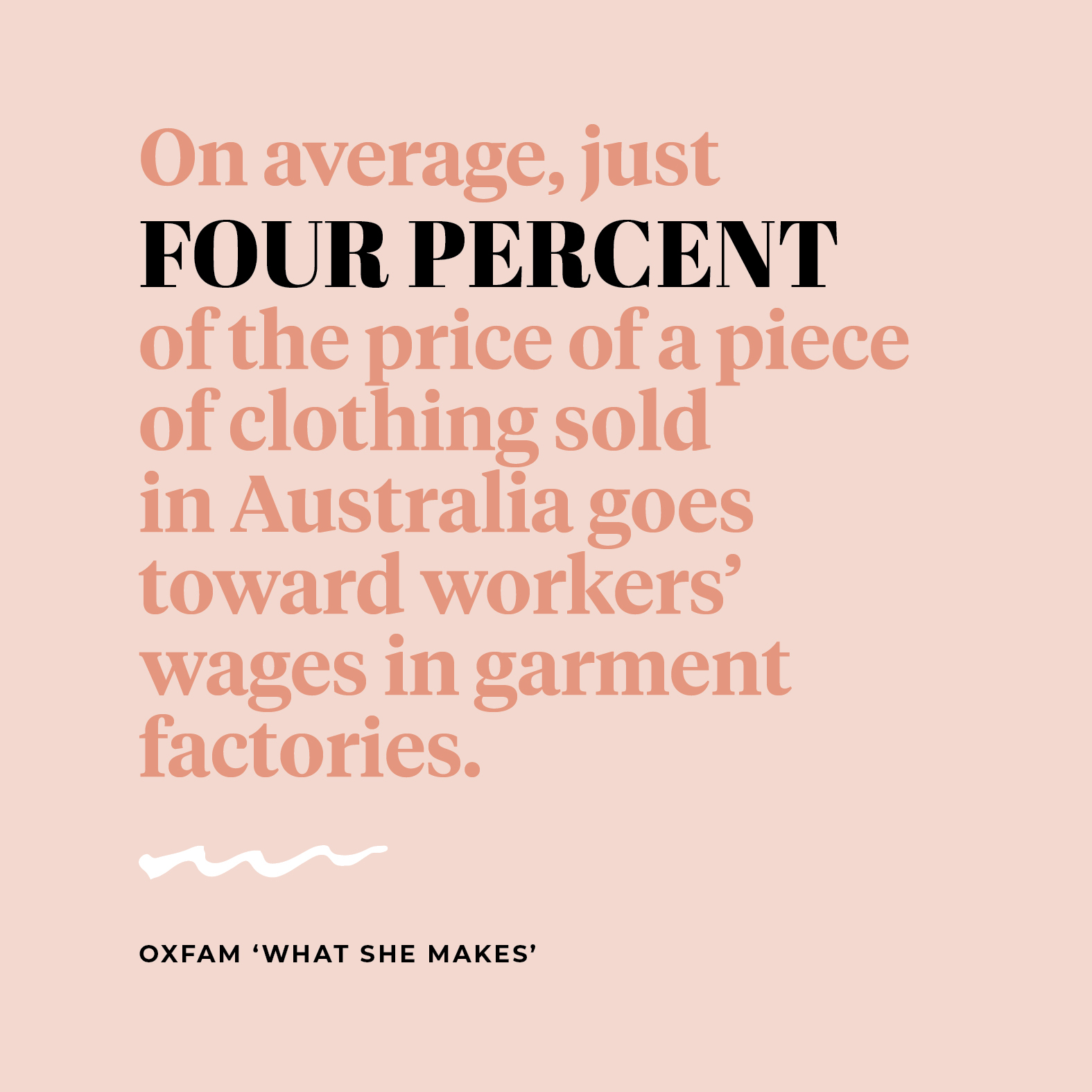 What She Makes… is keeping her in poverty

What She Makes is the name of the Oxfam campaign that’s reporting on the wages and living conditions of the women who make a lot of Australia’s fashion garments in Bangladesh.

Multiple reports released through the campaign reveal the poor business practices of major Australian fashion brands that are part of a system of exploitation keeping the women who make our clothes trapped in poverty.

The campaign’s Company Tracker calls on Australian fashion labels to work towards paying their garment makers a living wage. A wage which would ensure that these women can afford basic needs such as food and water, safe shelter, transport and access to medical services for themselves and their children.

On average, a living wage (as specified by the Global Living Wage Coalition) is about three times the minimum wage. In Dhaka, Bangladesh, the living wage is calculated at AU$276 per month. That’s less than a dollar an hour for those 12-hour shifts, six days per week.

Currently, on average, just four percent of the price of a piece of clothing sold in Australia goes toward workers’ wages in garment factories. A living wage wouldn’t make a huge difference to this, but it would dramatically change the lives of the women and families on the receiving end of these wages. 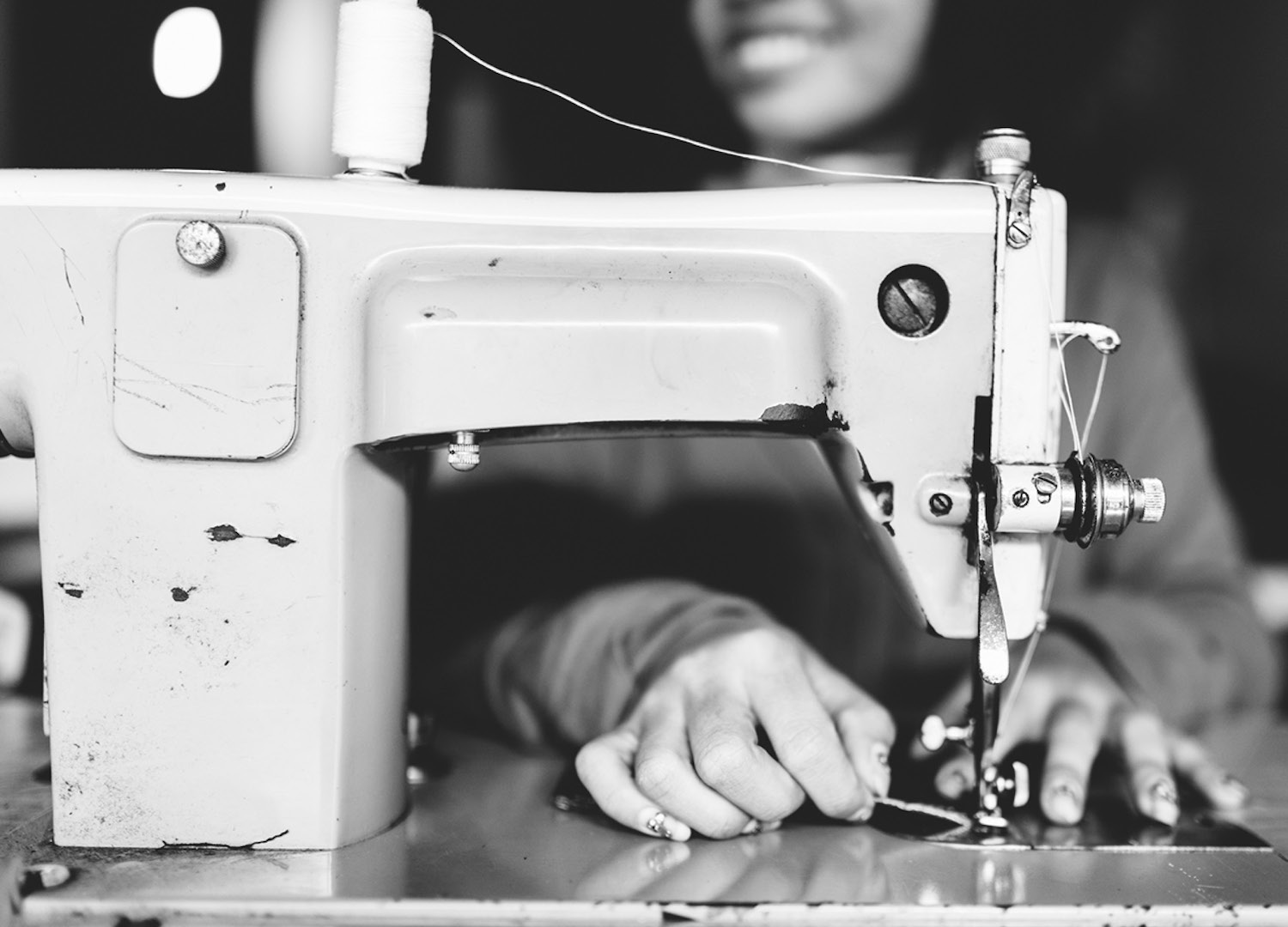 Stitching together a clear image of the industry

We need to look at the real picture of the impact of Australia’s fast fashion brands on women. The 2019 Oxfam report, Made in Poverty: The True Price of Fashion, found that:

Australian fast fashion brands are keeping women in poverty. That’s the truth. And paying a living wage and ensuring they have workers’ rights similar to what we’d expect in Australia is the first step that needs to be taken.

In the meantime, the major Australian fashion labels that make claims celebrating female empowerment, while they perpetuate the issue of poverty among women in the fashion industry, need to be called out. And the ones that are doing the right thing need to be promoted. 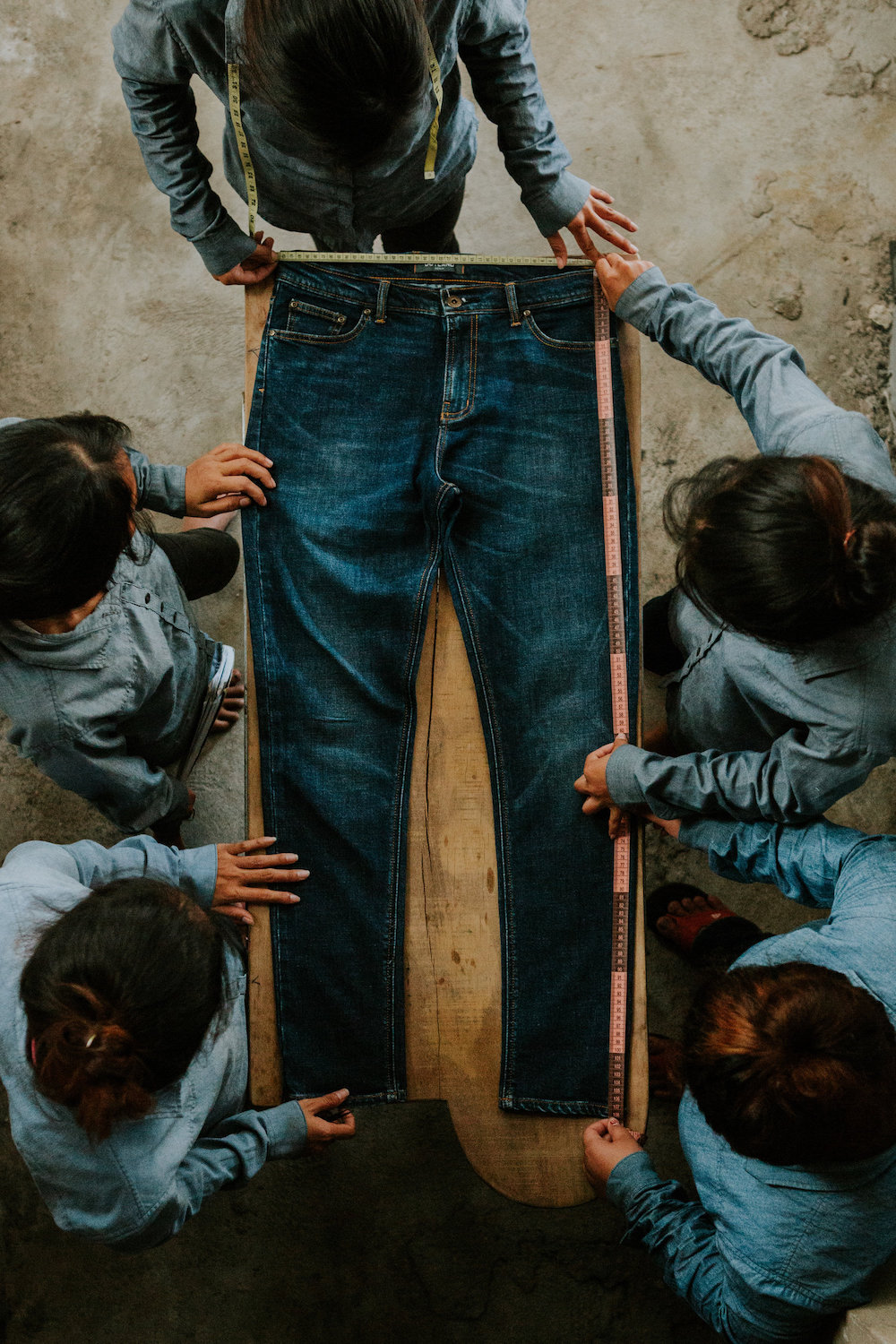 What does female empowerment in fashion supply chains look like?

For brands such as Myer’s own brands, simply admitting there are issues and committing to transparency is the first step towards paying garment workers a living wage. From there it’s about making a time-bound commitment to paying living wages, separating wages out in their costs, publishing their plans and then actually paying a living wage.  Brands such as Gorman and even H&M have taken some of these first steps, but they are still a while away from actually paying living wages.

There are, however, some Australian and New Zealand brands that are leading their industry by going beyond just paying living wages and publishing detailed information about their manufacturers and garment workers.

Outland Denim is a great example. The brand’s manufacturing takes place in Cambodia, where it helps create an avenue for women who have experienced sex trafficking to create monumental social change in these women’s lives and their communities. They provide dignified employment and a living wage so the workers are able to support themselves and their families, as well as teaching the skills needed to progress their careers through a program of cross-training and upskilling. Outland states that “a living wage ensures workers have enough income to afford a decent standard of living, cover necessary expenses, such as food, housing, healthcare, education and discretionary items, and allows them to save for unexpected events. For many of our staff, this level of financial security is freedom in itself. Freedom from worry. Our staff can send their children to school, provide for extended family, and plan for the future. All things previously not possible”.

With manufacturing operations closer to home, New Zealand-based underwear brand Nisa was set up in 2017 by Elisha Watson, after volunteering with a Red Cross refugee resettlement programme. Despite having no fashion experience, Elisha decided to set up a small sewing studio in her hometown of Wellington with the aim of working with refugees and new migrants to teach new skills, provide employment opportunities and help them integrate into society. The brand’s dream is to build an alumni of 100 former employees who go on to inspire their own communities. It’s fashion for good, in more ways than one. 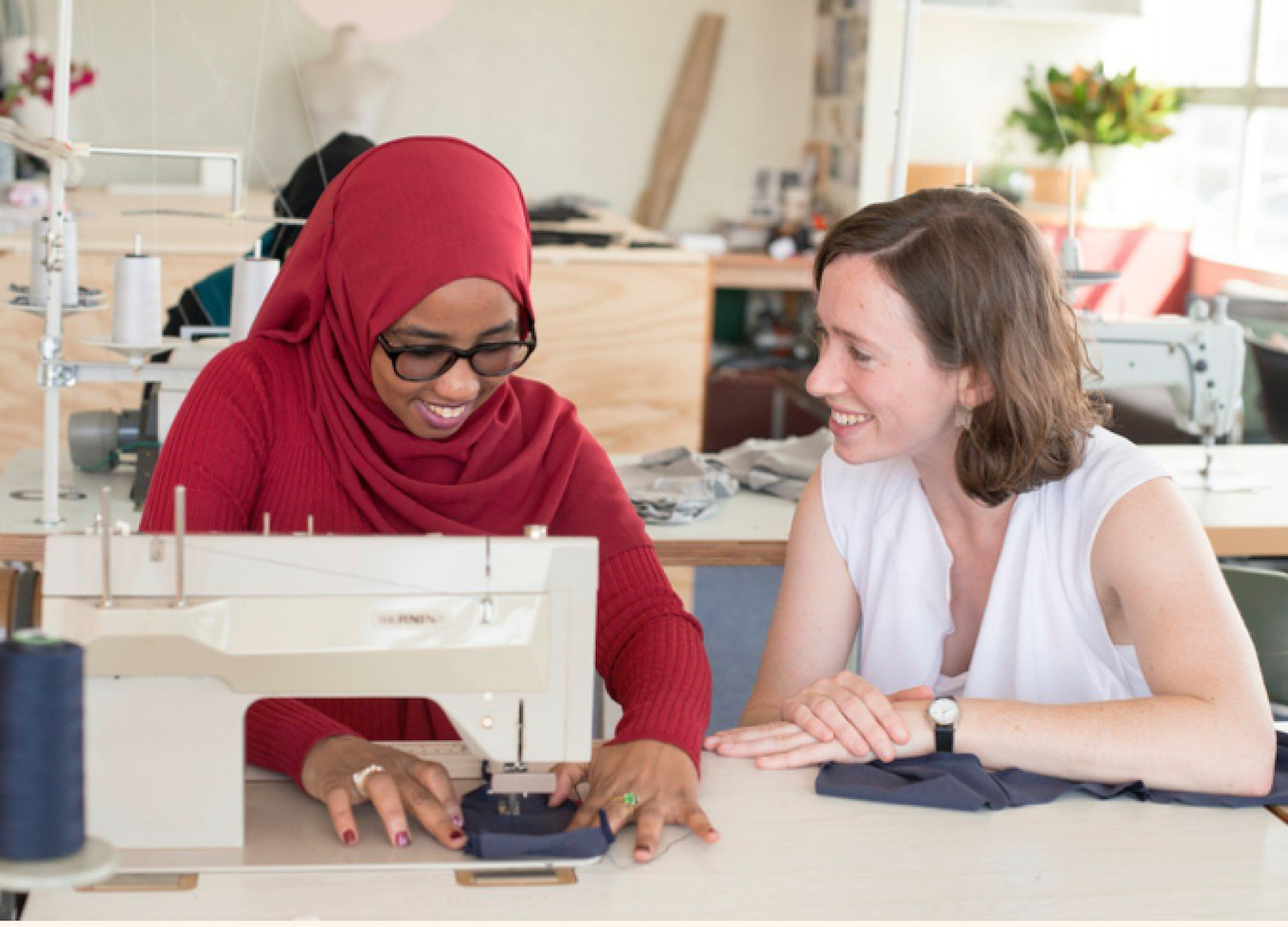 IMAGE: FOWZIYA AND NISA FOUNDER ELISA WATSON IN THE WORKSHOP.

Where to from here?

Australian and New Zealand brands are already proving it’s possible to pay staff in the supply chain a living wage and maintain a sustainable business model. Some are going even further to empower women. Is there really any excuse not to?

This International Women’s Day, let’s hope that the brands that profit from those t-shirts emblazoned with feminist slogans are making the changes within their own supply chains the industry so gravely needs. But at the end of the day, while brands may have the people to empower or disempower the women in their supply chains, we’re the ones with the real power. Go beyond the t-shirt slogan and vote with your wallet for the change you want to see.