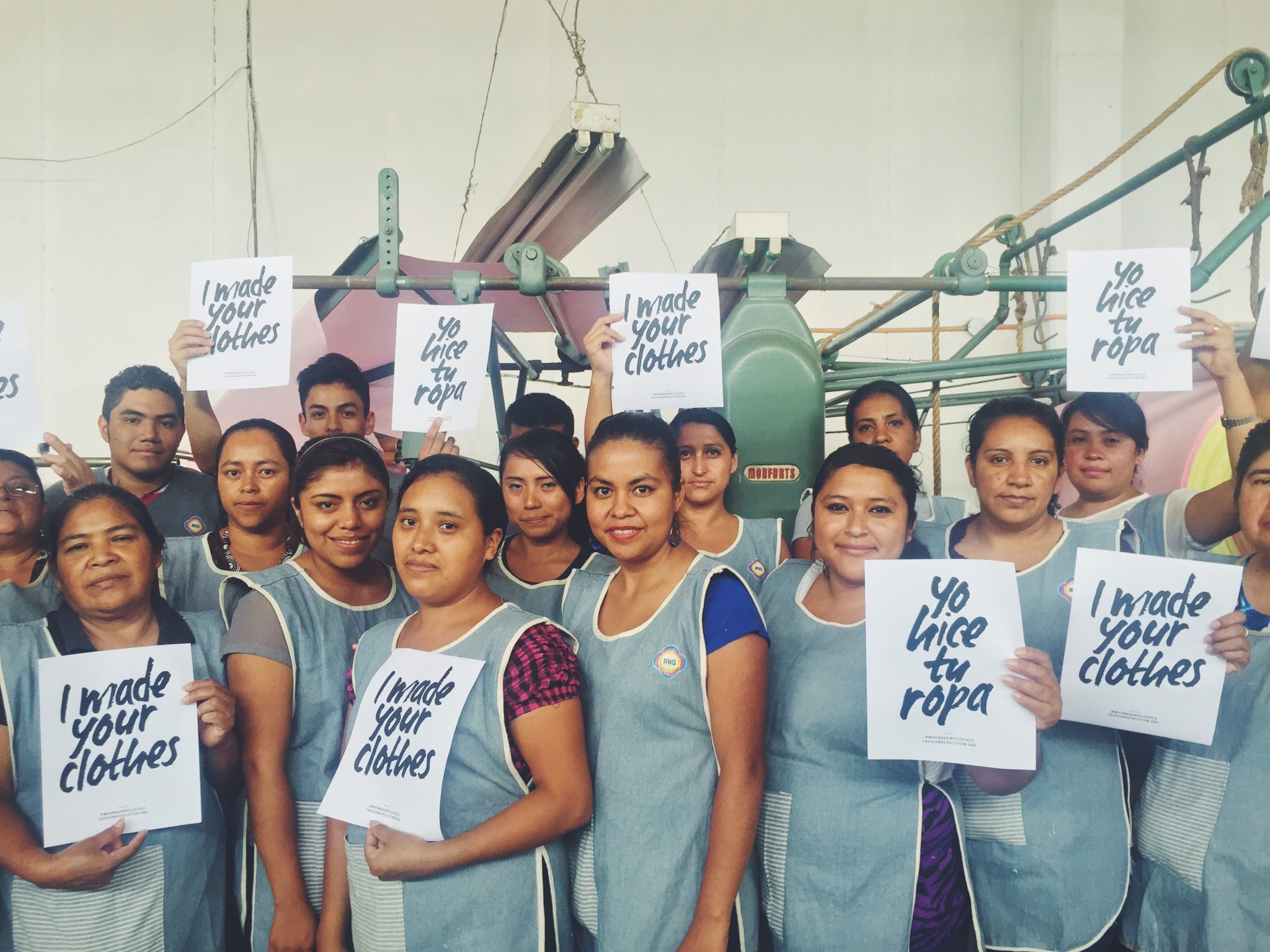 With the sixth year of Fashion Revolution Week in full swing, we’re revisiting this article from Issue 37 – a look atthe first half-decade of the campaign that demands to know “Who made my clothes?”, as well as the horrific incident that sparked a global movement.

Wednesday 24 April, 2013, started out much like any other day in Dhaka, Bangladesh. Rush hour hit, and people poured into Rana Plaza, a factory, apartment and retail building in the Savar district on the western fringe of the city. Garment workers sat at their sewing machines – labels for 31 clothing brands, including Mango, Primark and Benetton, spread out before them – when, just before 9am, the building began to shake. Within minutes, a major structural failure had reduced the eight-storey Plaza to a pile of rubble. Unable to escape, 1138 people lost their lives. Another 2500 injured workers would be pulled alive from the debris in the hours and days that followed.

The world watched in horror as information about the deadliest garment factory accident in history started to surface. The building’s owners had reportedly ignored warning signs, such as fissures in the concrete. Shops and a bank had been evacuated, but not the five garment factories on Rana Plaza’s upper floors. Driven by production quotas and the bottom line, management had ordered their staff to work on regardless.

For many, the revelations that came out of Rana Plaza confirmed something they had long suspected: the basic human rights of Bangladesh’s 3.6 million garment workers – as well as the other 75 million-odd people who work in the global garment trade – were not being upheld. The fast fashion industry that had permitted incidents like Rana Plaza and the Tazreen factory fire – which had claimed the lives of at least 117 Bangladeshi garment workers in November 2012 – was in desperate need of an overhaul. 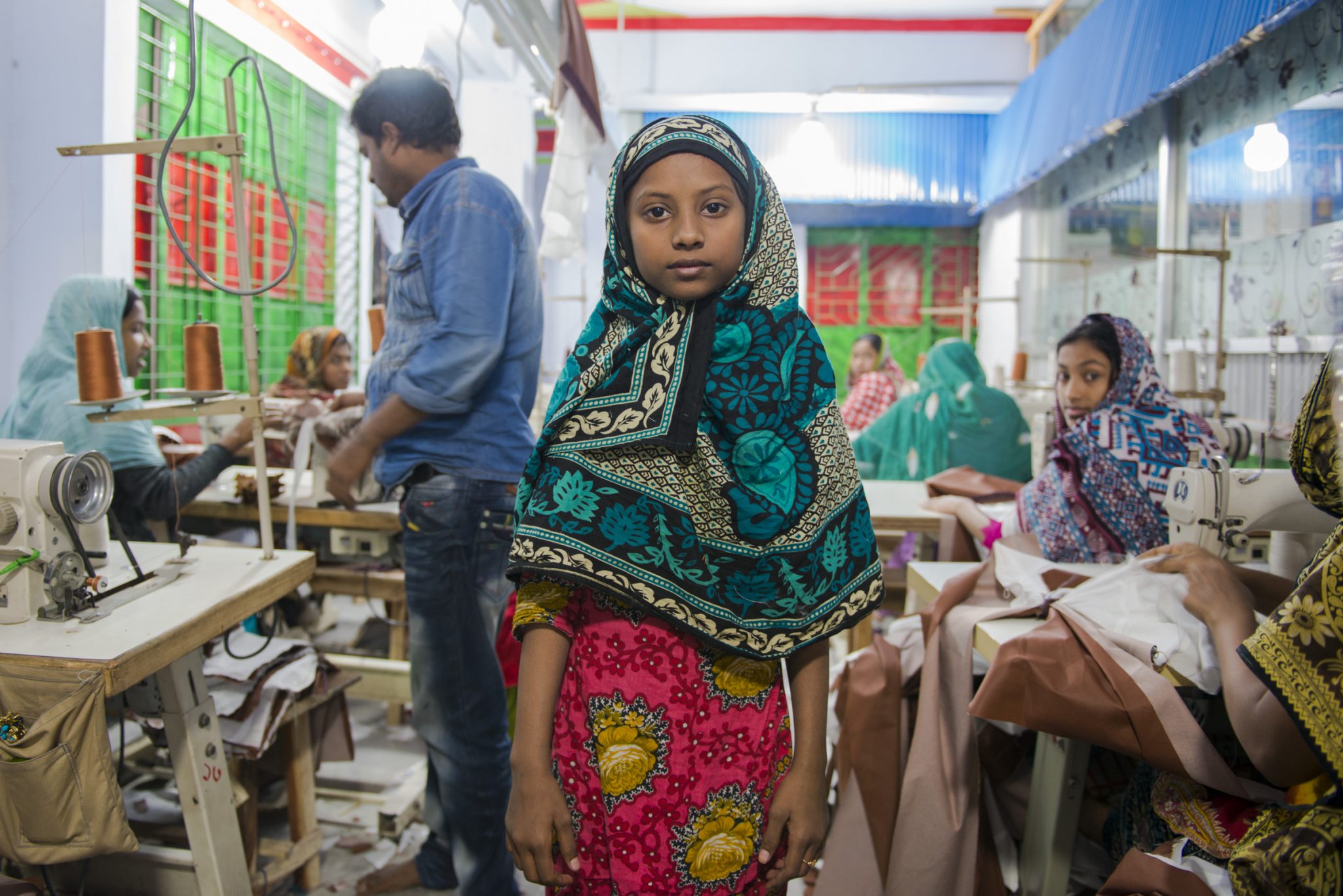 Three months after Rana Plaza, some of ethical fashion’s brightest minds and most vocal advocates were gathered at the Ethical Fashion Forum’s Source Summit in London. Carry Somers, the British designer behind ethical accessories label, Pachacuti, was among them. “In the aftermath of Rana Plaza, everywhere I looked, there were newspaper articles calling for a more ethical fashion industry,” she remembers. “I knew we needed to find a way to channel public concern into a longstanding campaign so that the victims of Rana Plaza – and all the other tragedies that have occurred in the name of fashion – would never be forgotten.”

That day, Carry and her colleague, fashion designer and academic Orsola de Castro, founded Fashion Revolution – a consumer-powered movement to call for a fairer, safer and more transparent fashion industry. They pulled together a team of volunteers, and on 24 April, 2014 – the first anniversary of the Rana Plaza collapse – inaugural Fashion Revolution Day events took place in 55 countries around the world.

“We were global before we were even local,” says Mel Tually, Fashion Revolution’s longstanding coordinator for Australia and New Zealand and a member of the Global Advisory Committee. Headquartered in the UK with Carry and Orsola at the helm, Fashion Revolution’s model relies on a network of volunteer country coordinators and student ambassadors who lead local-level activities. In 2018, more than 100 countries – from Argentina to Zimbabwe – are set to formally participate in Fashion Revolution, making it the movement’s biggest year yet.

Relaunched in 2016 as Fashion Revolution Week, it now incorporates seven days of campaigning and events held annually each April. While garment workers remain at the heart of what they do, Fashion Revolution has expanded to cover “issues of transparency, traceability, responsibility and product stewardship from both a labour rights and an environmental perspective,” Mel explains. The movement revolves around three major themes: the business of fashion (models of production and consumption); materials (especially the environmental impact of the fashion industry, the world’s second-biggest polluter); and mindset (shifts in society that mean we now buy 400% more clothing than we did two decades ago). “We are charged with engaging all stakeholders in the industry – bodies and organisations, unions and governments, brands, wholesalers, the education sector, producers and, of course, consumers,” she says. “Because it’s an open-source movement, we encourage anyone and everyone to take part in whatever way they like,” Mel continues. 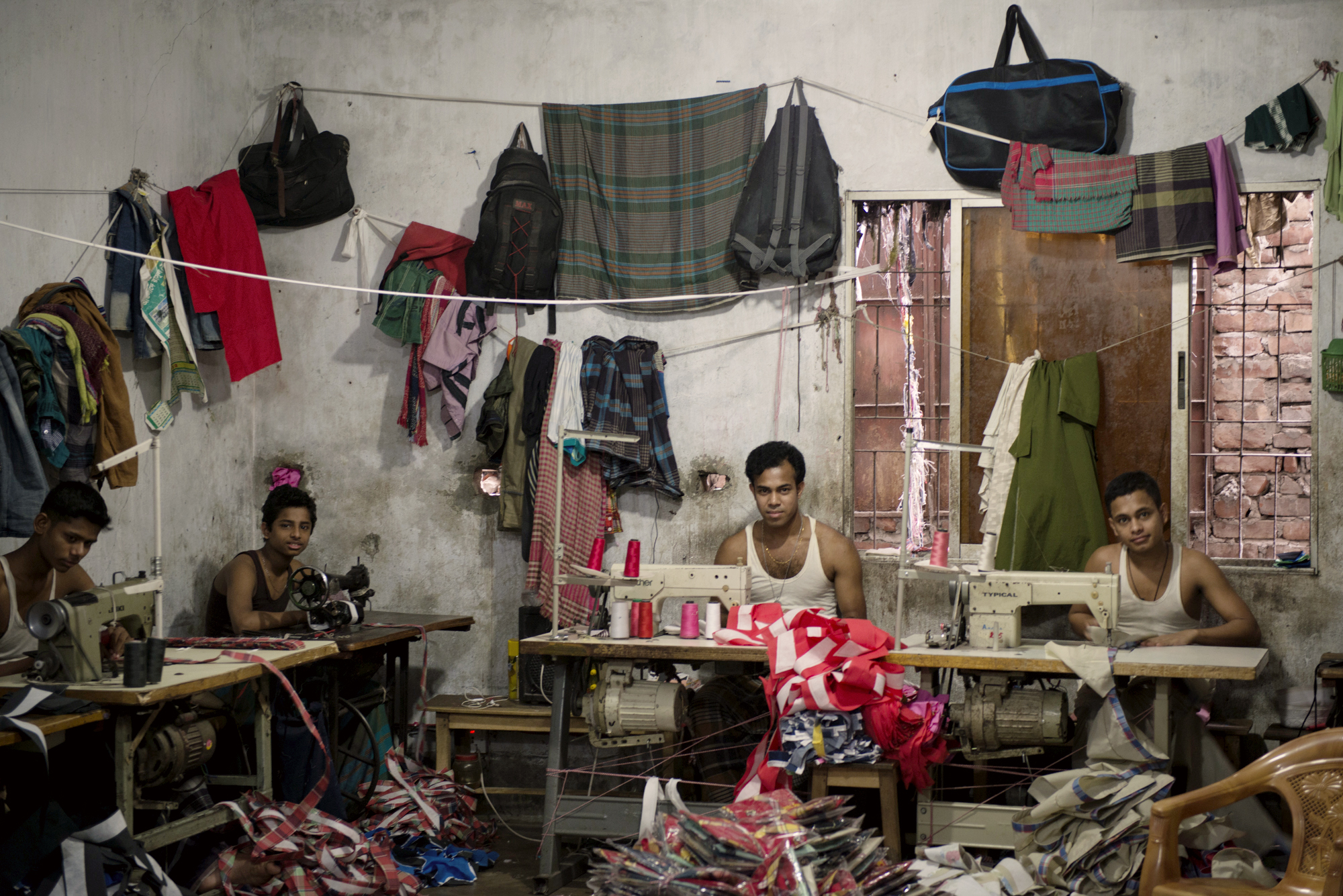 Fashion Revolution Week typically involves a diverse program of fashion-themed events, including film screenings, open studios, clothing swaps, panel discussions, guest lectures and workshops. In 2017, more than 66,000 people attended 1000 Fashion Revolution events organised by country teams across the globe. Social media campaigns are staged throughout the week, and social experiments – like the viral ‘2 Euro T-Shirt’ stunt that took place on the streets of Berlin in 2015 – are deployed to focus public attention on the cause.

Fashion Revolution’s flagship campaign and biggest success is the #WhoMadeMyClothes hashtag. Consumers are encouraged to directly engage with fashion brands by posting photos of themselves – typically with their clothes turned inside out, tags visible – on social media. The idea is to elicit information about the fashion supply chain by prompting brands to disclose their clothing’s providence. “The concept of asking brands for transparency was very clear to us from the beginning,” explains Orsola, Fashion Revolution’s co-founder. “But the ‘Who Made My Clothes’ hashtag was originally coined by us as a team a little later. In fact, it was ‘Who Made Your Clothes’ in the first year, and we switched to ‘Who Made My Clothes’ in year two. It’s the directness and simplicity that makes it work. For such a simple question, it’s often very difficult to answer.”

We want people to be active consumers – and that means having a voice. Everybody has a role to play.

In 2017, posts using the hashtag made a whopping 533 million impressions on social media. Brands participated in record numbers, with more than 2400 companies proactively responding to their customers, many using the complementary #IMadeYourClothes hashtag. “People feel like they have a sense of ownership,” Mel says of the success of the ‘Who Made My Clothes’ catchcry. “They’re not just on the receiving end. We want people to be active consumers – and that means having a voice. Everybody has a role to play, and there are no barriers to entry – you really can be anyone in any country at any level, and there’s something for you to take part in.”

Other online campaigns encourage conscious consumerism as an alternative to fast fashion. Loved Clothes Last invites us to “fall back in love with the clothes we already own” by penning love notes to our most precious items. #Haulternative offers practical tips for refreshing one’s wardrobe in ways that minimise social and environmental impact – op-shopping, upcycling, swapping and mending. Resources such as the ‘How to be a Fashion Revolutionary’ guide and a bevvy of whitepapers and reports can be downloaded in exchange for a small donation. There’s a three-part podcast hosted by fashion journalist Tamsin Blanchard, and Fashion Revolution even has a printed zine, now in its second edition, and an e-learning course available on FutureLearn.

Behind the scenes, Fashion Revolution’s policy division works tirelessly year-round to lobby for industry-level change. In April 2017, Head of Policy Sarah Ditty addressed the European Parliament on behalf of Fashion Revolution, helping push through a resolution to curb worker exploitation. Produced in collaboration with Microfinance Opportunities, Fashion Revolution’s Garment Worker Diaries project collected primary data from Bangladesh, Cambodia and India to advocate for changes to living wages. Updated annually, one of the movement’s biggest outputs is the Fashion Transparency Index, which critically evaluates more than 100 brands based on their transparency, and environmental and social initiatives. 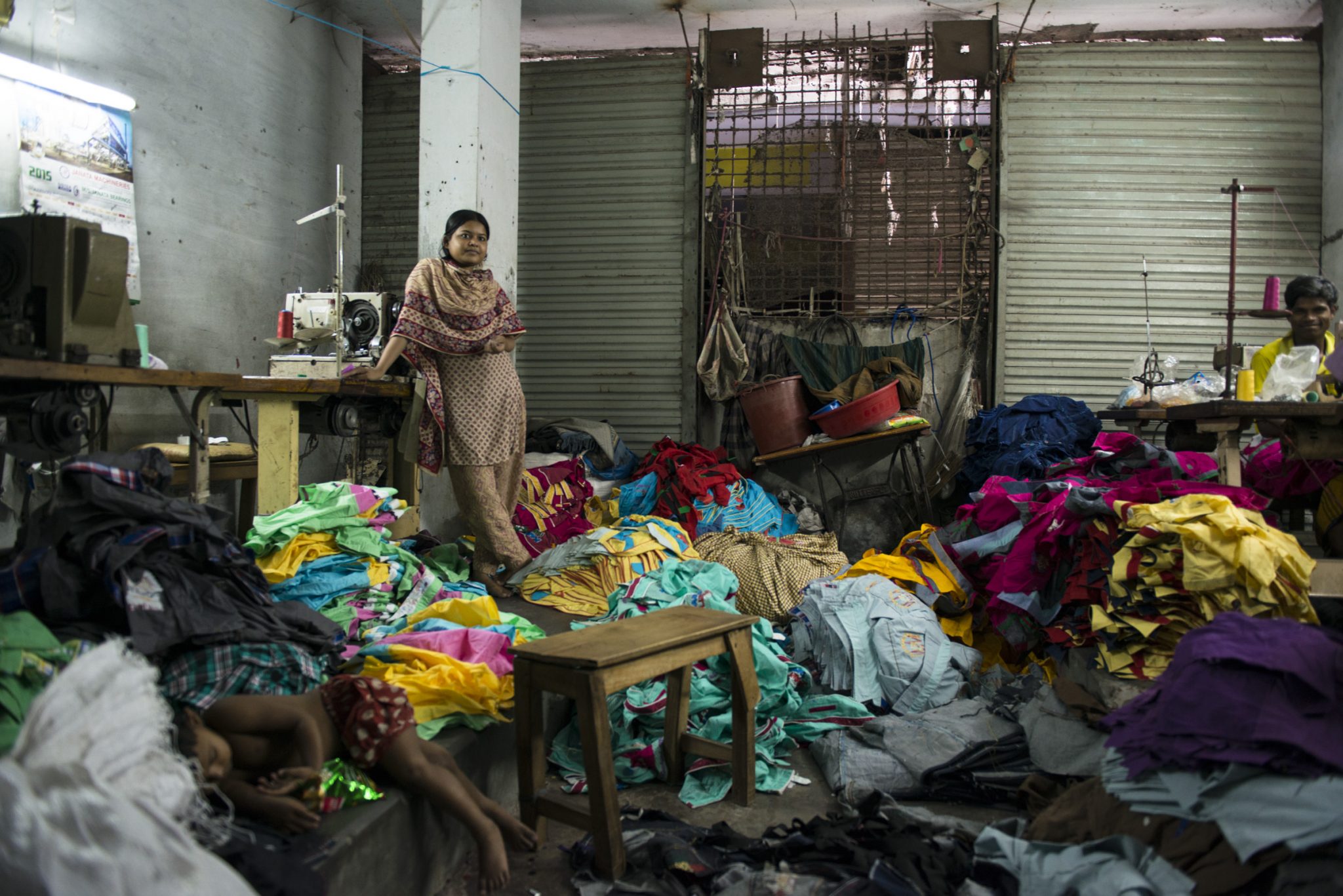 Now considered the world’s largest fashion activism movement, Fashion Revolution has opened up new lines of communication, empowering people to raise their voices in ways that weren’t possible just a few years ago. Orsola puts the success down to “our language, our approach and our inclusiveness – coupled with the fact that we are sincere and positive. What we have done is accelerate the conversation on fashion and sustainability, especially with a younger audience.” Mel agrees: “Before Rana Plaza collapsed, there wasn’t really a space to have a conversation about these issues. Now there is. We’ve chosen to discuss it as an industry-wide problem – we don’t name and shame brands. We’re not about boycotting. This is a system breakdown, and the only way we’re going to solve it is if all stakeholders come together. There’s no point in having one hero brand – the whole industry needs to do it. And if that encourages a race to the top, then that can only be a good thing.”

“Publishing factory lists is one of the biggest changes I’ve seen,” Mel says of Fashion Revolution’s impact to date. “When brands start hearing their own customers ask ‘Who Made My Clothes?’, that’s when it hits home that a large portion of people are passionate and interested. They use Fashion Revolution as a vehicle to talk about what they’re doing. There are now more than 100 brands publishing first- and some second-tier factory lists, up from around 20 when we started.” Nowhere on earth is the transition to a more transparent and fair fashion industry more vital than in Bangladesh. Dhaka-based fashion designer and arts entrepreneur Nawshin Khair pitched in on the day Rana Plaza collapsed, helping to coordinate supplies and volunteers for the rescue effort. A few years later, she joined Fashion Revolution as country coordinator for Bangladesh. As a member of the Global Advisory Committee, she offers invaluable insight into the situation for Bangladeshi garment workers on the ground. 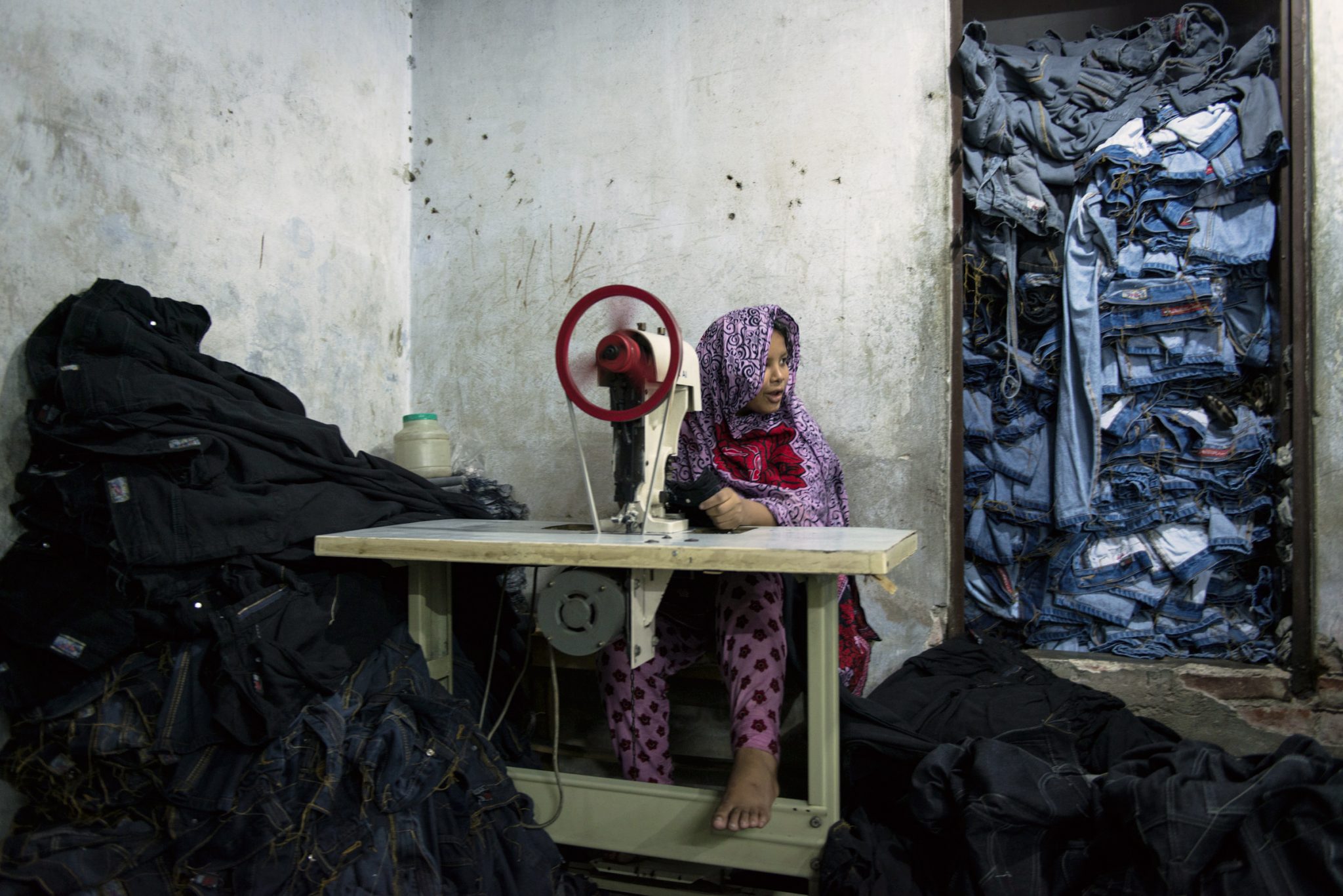 “Bangladesh is resilient,” Nawshin says. “Over the last five years, things have changed for the better. NGOs have been working with factory owners to introduce worker benefits, such as health insurance and childcare services. The Accord [a legally binding agreement between brands and trade unions signed in the aftermath of Rana Plaza] is helping to make many factories safer.” Positive pressure generated by Fashion Revolution has played a role in these changes. “Incidents like Rana Plaza indicate that there will always be loopholes in the system,” Nawshin continues. “It’s the duty of conscious consumers to expose the plight of the people who make our clothes and the environmental impacts of fast fashion. Fashion Revolution is a single voice. It’s important we keep focused and maintain this union because there is so much more to rectify.”

It’s about recognising that there are people behind everything we wear, and that those people have needs and desires and dreams just like you and I

In the years to come, Fashion Revolution will build on its impact to date by taking a deeper dive into the supply chain. Large-scale, public tragedies such as Rana Plaza have focused global attention on garment workers – but ‘invisible’ workers at the furthest reaches of the fashion complex are just as vulnerable. “Input suppliers, embroiderers, those who work the cotton fields and make synthetics – these are the people who are hard to get to,” Mel explains. “The bottom line is that anyone could be making your clothes. Would you be happy for your neighbour to be working in unsafe conditions for anything less than a basic wage? When you try to put someone you know in that place, most people say, ‘No, I’m not OK with that.’ It’s about recognising that there are people behind everything we wear, and that those people have needs and desires and dreams just like you and I.”