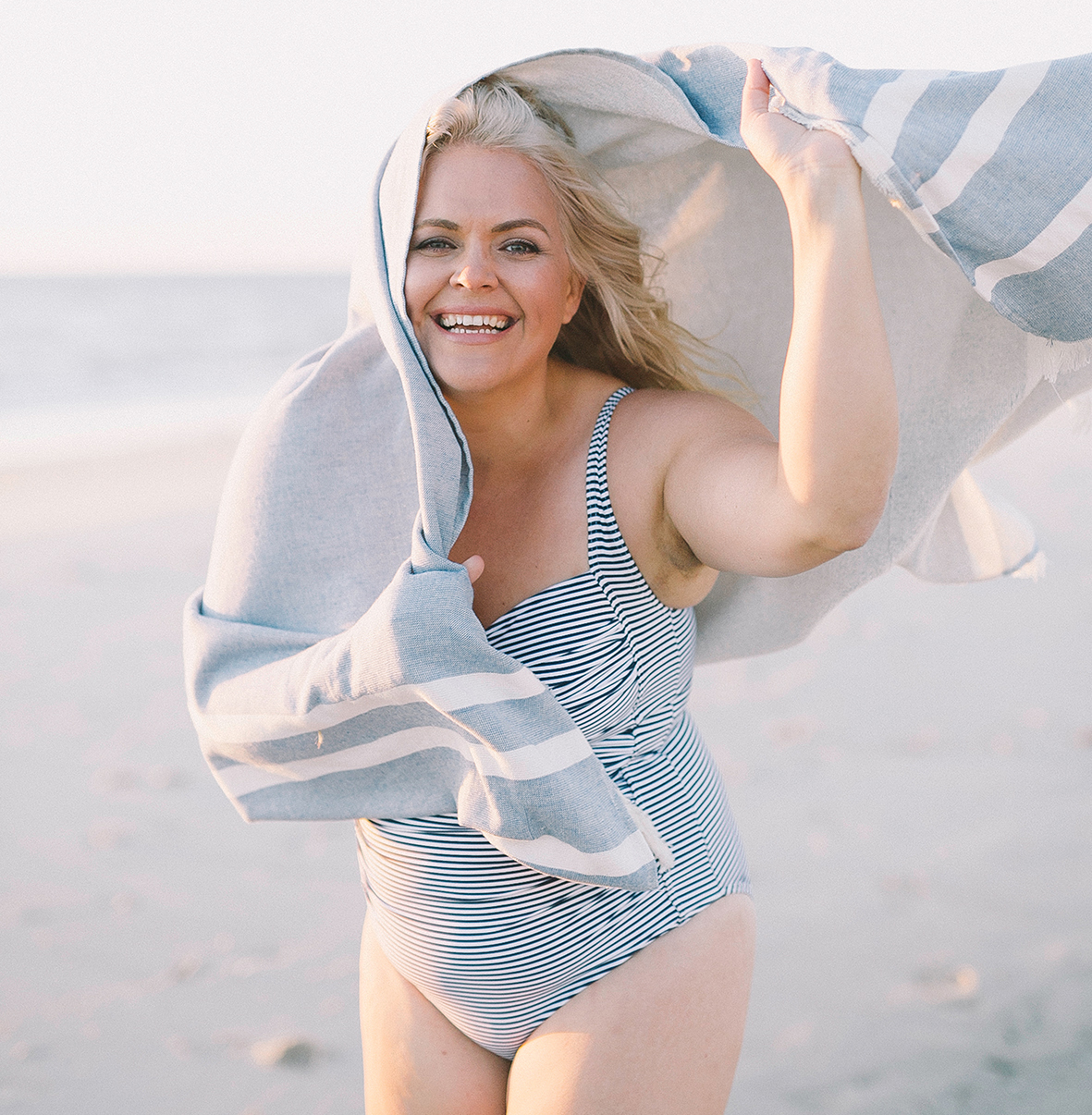 Taryn Brumfitt wants every woman to love their body. The Adelaide-based filmmaker made headlines around the world when she posted a non-traditional before-and-after photo – sparking an important conversation and spurring her on to create groundbreaking body positivity documentary Embrace. Now an author and public speaker, Taryn is founder of the body image movement – an organisation with a mission to help people everywhere disregard the negative messages we’re bombarded with and truly appreciate our bodies for everything they allow us to achieve.

After having three children, I thought that the only option to fix my ‘broken’ body was to have cosmetic surgery. What I didn’t realise at the time was that it wasn’t my body that needed to change; it was my perspective. A few weeks before the surgery I was watching my daughter Mikaela playing in front of me and I had a profound epiphany. I thought: “How am I going to teach Mikaela to love her body if I can’t love my own?” Everything changed for me in that moment, but it’s really important for me to acknowledge to anyone who might be bowing their head because they’ve chosen to have surgery that this is simply my story. I think that as human beings we need to embrace diversity, not just in the shapes and abilities of our bodies but also the diversity of choices we make as individuals. There is no room in my world or that of the Body Image Movement for shame, fear or judgement. Every person makes their own unique decisions based on their own unique set of circumstances. 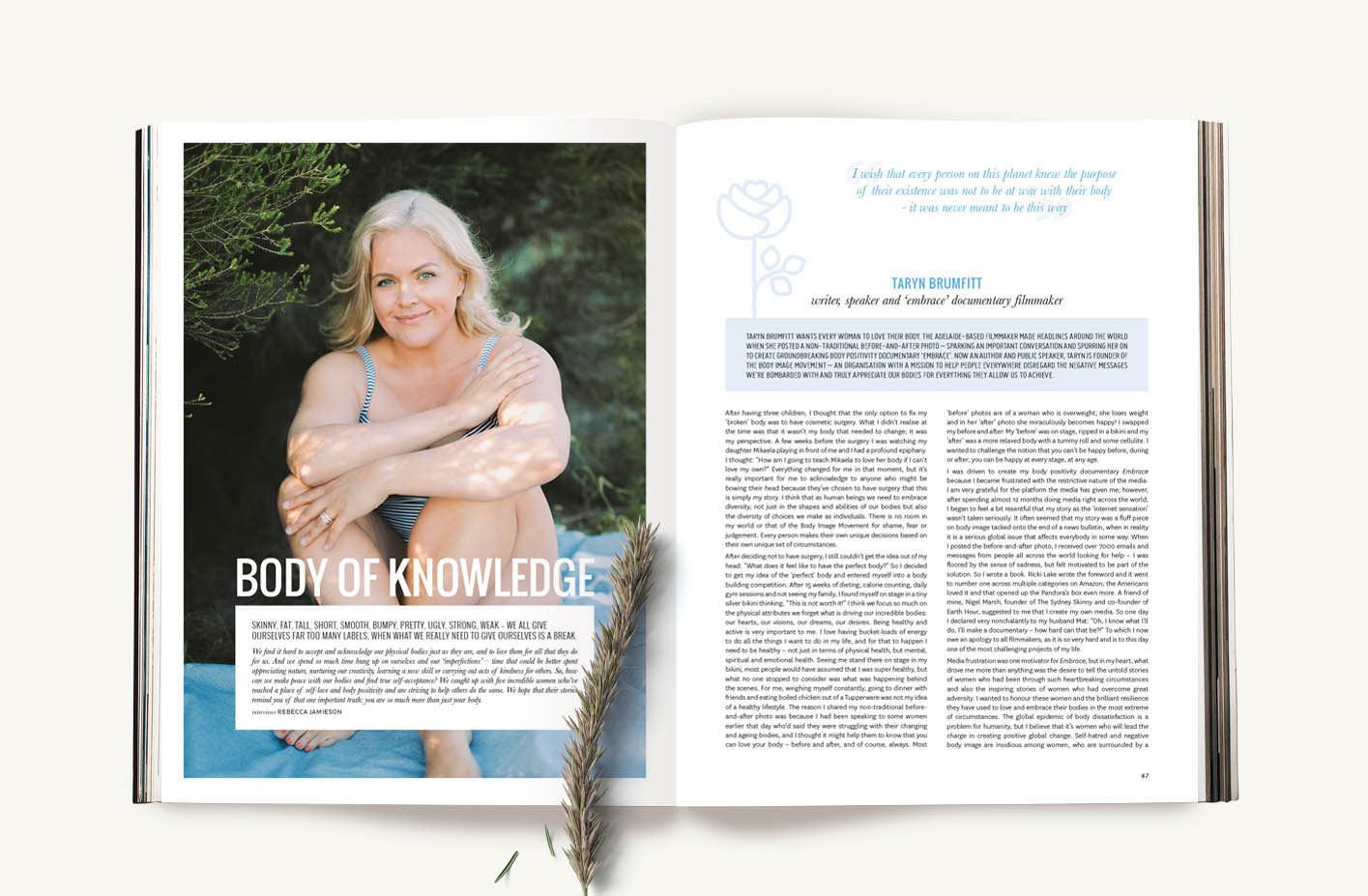 After deciding not to have surgery, I still couldn’t get the idea out of my head: “What does it feel like to have the perfect body?” So I decided to get my idea of the ‘perfect’ body and entered myself into a body building competition. After 15 weeks of dieting, calorie counting, daily gym sessions and not seeing my family, I found myself on stage in a tiny silver bikini thinking, “This is not worth it!” I think we focus so much on the physical attributes we forget what is driving our incredible bodies: our hearts, our visions, our dreams, our desires. Being healthy and active is very important to me. I love having bucket-loads of energy to do all the things I want to do in my life, and for that to happen I need to be healthy – not just in terms of physical health, but mental, spiritual and emotional health. Seeing me stand there on stage in my bikini, most people would have assumed that I was super healthy, but what no one stopped to consider was what was happening behind the scenes. For me, weighing myself constantly, going to dinner with friends and eating boiled chicken out of a Tupperware was not my idea of a healthy lifestyle. The reason I shared my non-traditional before-and-after photo was because I had been speaking to some women earlier that day who’d said they were struggling with their changing and ageing bodies, and I thought it might help them to know that you can love your body – before and after, and of course, always. Most ‘before’ photos are of a woman who is overweight; she loses weight and in her ‘after’ photo she miraculously becomes happy! I swapped my before and after. My ‘before’ was on stage, ripped in a bikini and my ‘after’ was a more relaxed body with a tummy roll and some cellulite. I wanted to challenge the notion that you can’t be happy before, during or after; you can be happy at every stage, at any age.

The global epidemic of body dissatisfaction is a problem for humanity, but I believe that it’s women who will lead the charge in creating positive global change

I was driven to create my body positivity documentary Embrace because I became frustrated with the restrictive nature of the media. I am very grateful for the platform the media has given me; however, after spending almost 12 months doing media right across the world, I began to feel a bit resentful that my story as the ‘internet sensation’ wasn’t taken seriously. It often seemed that my story was a fluff piece on body image tacked onto the end of a news bulletin, when in reality it is a serious global issue that affects everybody in some way. When I posted the before-and-after photo, I received over 7000 emails and messages from people all across the world looking for help – I was floored by the sense of sadness, but felt motivated to be part of the solution. So I wrote a book. Ricki Lake wrote the foreword and it went to number one across multiple categories on Amazon; the Americans loved it and that opened up the Pandora’s box even more. A friend of mine, Nigel Marsh, founder of The Sydney Skinny and co-founder of Earth Hour, suggested to me that I create my own media. So one day I declared very nonchalantly to my husband Mat: “Oh, I know what I’ll do, I’ll make a documentary – how hard can that be?!” To which I now owe an apology to all filmmakers, as it is so very hard and is to this day one of the most challenging projects of my life.

Media frustration was one motivator for Embrace, but in my heart, what drove me more than anything was the desire to tell the untold stories of women who had been through such heartbreaking circumstances and also the inspiring stories of women who had overcome great adversity. I wanted to honour these women and the brilliant resilience they have used to love and embrace their bodies in the most extreme of circumstances. The global epidemic of body dissatisfaction is a problem for humanity, but I believe that it’s women who will lead the charge in creating positive global change.

Read more from Taryn (and five other incredible body image leaders) in Issue 32 of Peppermint – on shelves until Sunday 26 February.