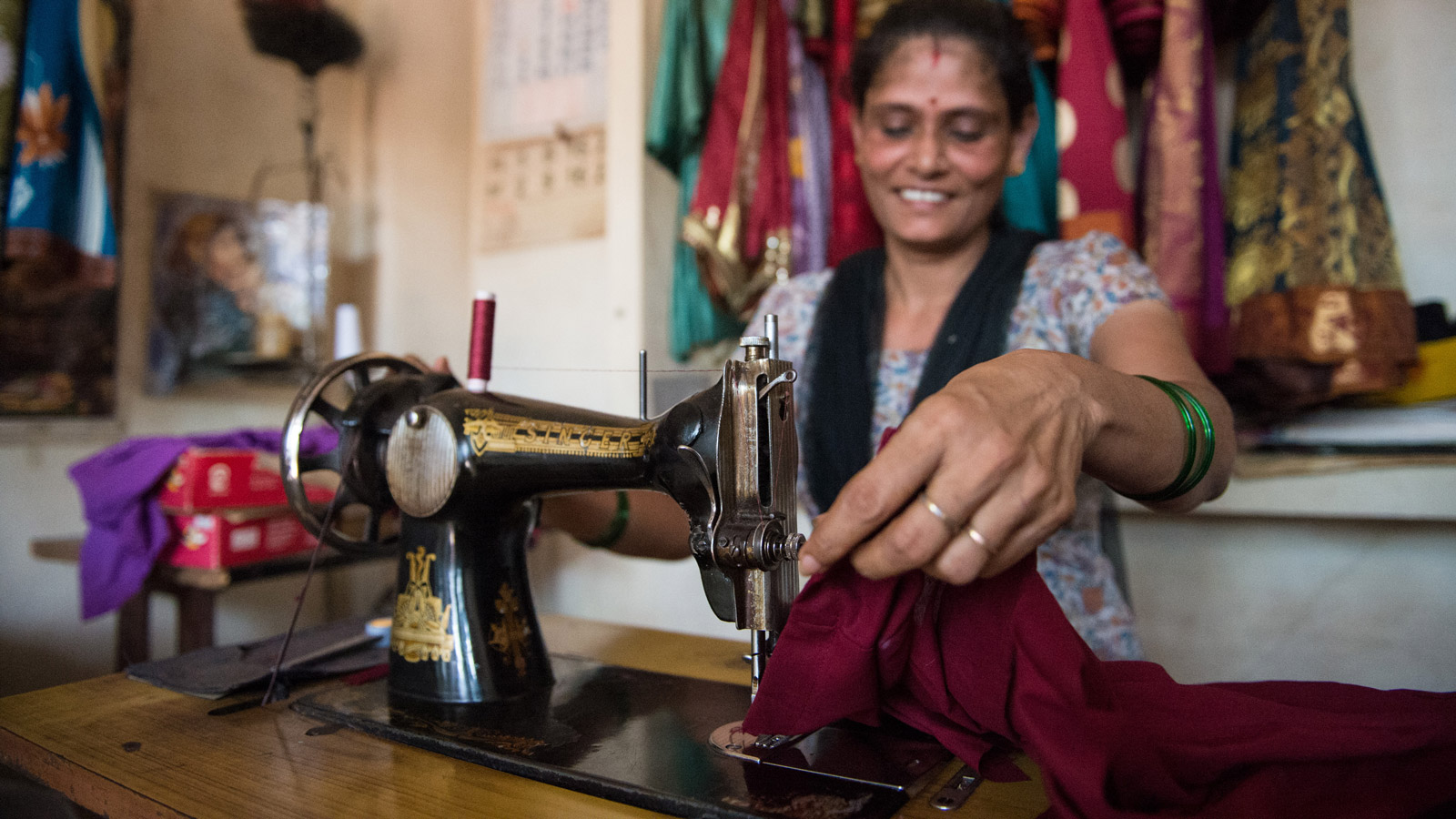 Now in its fourth edition, the ‘Ethical Fashion Report: The Truth Behind the Barcode’ ranks some of the world’s best-known fashion brands based on their approach to labour rights.

Published by Christian NGO Baptist World Aid Australia, this year’s Report is more comprehensive than ever, with 106 companies representing 330 individual brands held under the microscope. After being evaluated against 40 criteria that cover factors such as living wage, worker voice and traceability, each company and brand is awarded a grade from A to F. The results are presented in a series of easy-to-read, colour-coded graphics alongside in-depth analysis of some of the fashion industry’s most pressing problems.

At first glance, the 2017 results aren’t exactly encouraging – this year’s median grade of C+ represents no overall improvement on 2016. Fewer than 10 brands scored a B grade or higher across all four core categories: policies, knowing your suppliers, auditing and supplier relationships, and worker empowerment.

An A+ grade is no small feat, and this year three companies share that honour: Etiko, Mighty Good Undies and sportswear manufacturer RREPP (all of which were also graded in the A range in 2016). Others have made incremental progress, with 59% of companies surveyed in 2016 and 2017 improving their rank year to year. Because of the increased sample size used in 2017, more than double the number of companies were awarded an A grade this year.

The best overall results are found in the area of policies, with 84% of companies scoring in the A range. Workers’ empowerment, however, fares much worse, with just three companies scoring an A-, the highest grade awarded. These results have inspired one critique of the Report’s methodology: that it favours policy rather than application, and mitigation over prevention. Baptist World Aid acknowledges that if (and only if) the systems and policies assessed are implemented ‘well’ could they “reduce the extent of worker exploitation.”

Not surprisingly, the deeper into the supply chain the research delves, the worse the results get, with not one company scoring above the C range in the categories of ‘monitoring’ or ‘living wage’ at the raw-materials stage of production. Despite progress catalysed by initiatives such as Better Cotton, the opaqueness of the supply chain still conceals those least visible and most vulnerable. 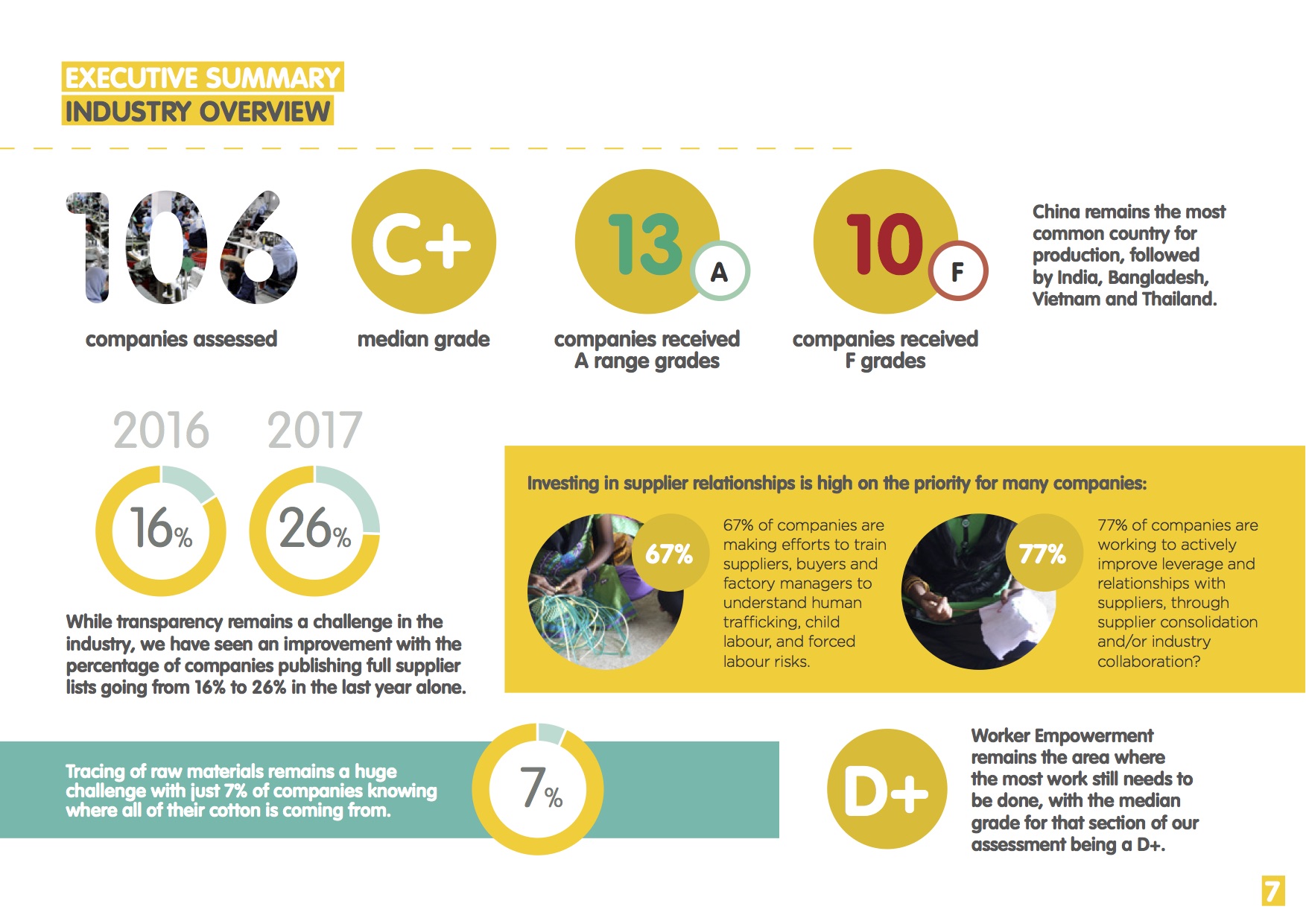 In one of this year’s most controversial results, Inditex, the parent company of Zara, retained its 2016 grade of A, putting it firmly towards the top of the rankings. Meanwhile 72% of companies that scored in the D-grade range are headquartered in Australia. Better resources and more robust strategies for corporate social responsibility could explain the trend towards multinational companies improving their rankings while local companies remain stagnant.

There are a few Australian brands that stand out for the right reasons – Mighty Good Undies was the only company surveyed that could prove it pays its workers a living wage. Mid-sized Australian companies including Cotton On Group and Pacific Brands (Bonds, Berlei and others) also made progress this year, nudging into the A-grade range. And New Zealand-based label Kowtow scored an A-grade too, rating consistently highly across the four core categories.

This year’s Report isn’t all facts and figures: a new addition is the ‘Made in…’ section, which bridges statistics with the real-life impacts of the fashion industry as told through anecdotes from workers in Bangladesh, Cambodia, Australia and beyond. It’s exactly this kind of human touch that consumers and brands are craving – this year 77% of companies identified ‘cultivating supplier relationships’ as a priority area going forward.

Transparency is trending: according to Baptist World Aid, 83% of the companies assessed in 2017 actively participated in the research process – up from just 54% in 2014. As campaigns like next week’s Fashion Revolution Week put increased pressure on brands, and companies are scrutinised more closely through research reports such as this one, it appears more brands than ever are heeding the call to divulge, disclose and describe their inner workings.