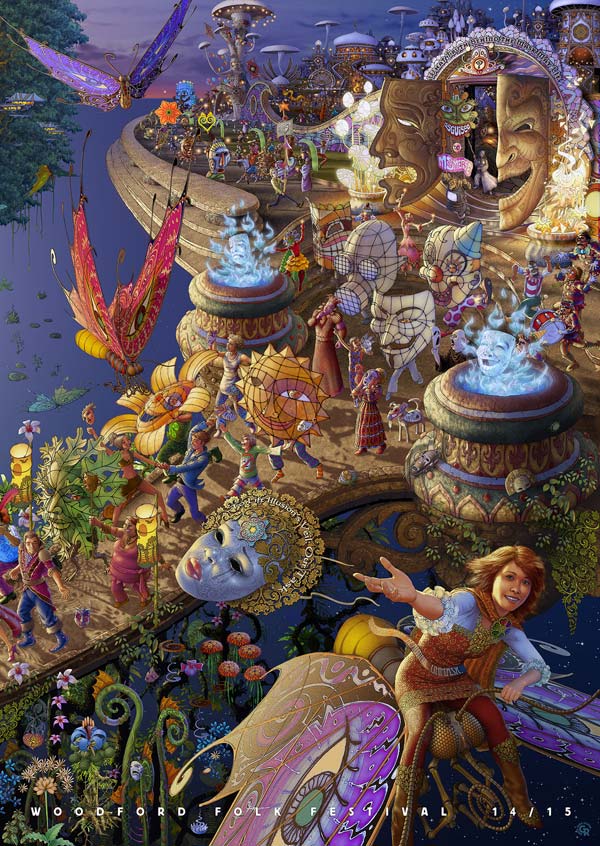 It’s almost that time of year again – the annual Woodford Folk Festival is coming to town from 26 December to 1 January, and they’ve got a fantastic line-up of artists and musicians to take you through the final few days of 2014. This year’s festival theme is all about what lies behind the mask – as Festival Director Bill Hauritz explains, ‘Does your mask conceal or reveal? By revealing what’s behind the mask, maybe we can discover a truer sense of ourselves’.

In the process, we can also have a cracking good time: this year’s Woodford programme offers concerts, workshops, dances, writers’ panels, comedy, film, talks and debates, circus, cabaret, parades, an entire children’s festival and more. Until the fun kicks off on Boxing Day, you can catch the festival’s six-foot tall puppet girl, Tilda – depicted in this year’s festival poster and built in collaboration with Irish spectacle company, Macnas – on the Sunshine Coast during December, where she’ll be featuring in workshops with the community as she journeys towards her final destination of Woodfordia.

Best of all, we’ve got a two free Woodford tickets to give away! They cover five nights of camping for the duration of the festival. For your chance to win, just leave a comment on this blog post telling us who you’re most looking forward to seeing at this year’s festival. To check out what’s on, read the programme. Good luck – we’ll be picking our winning happy camper by 4pm AEST on Thursday 4 December!