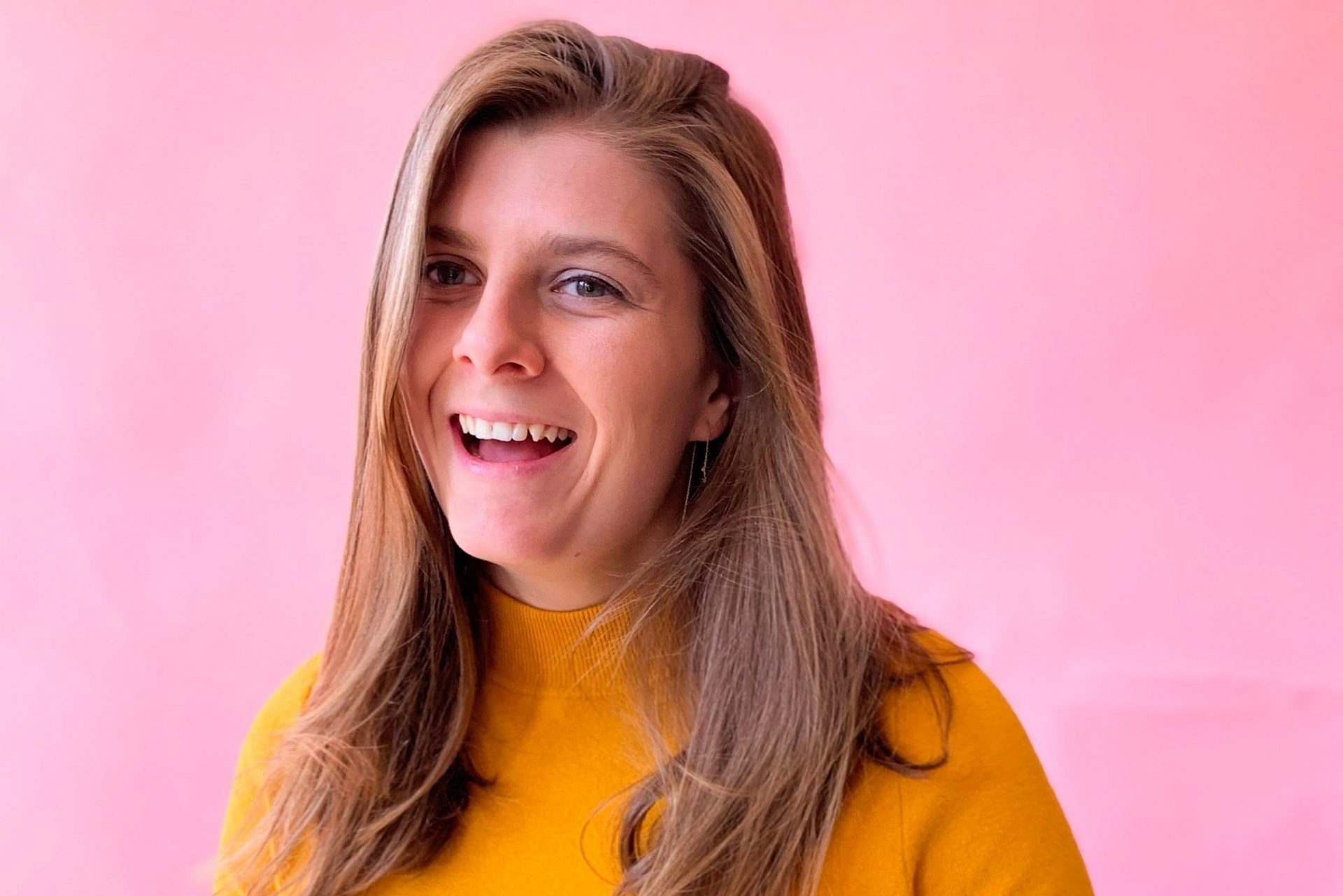 Julie Sanduski is a designer working at the intersection of food, sustainability and UI/UX. Her goal is to influence change through creative design, to encourage people to reduce food waste and enable a circular food economy. Julie is working in Seattle as part of the Creative Residency programme with Adobe. Peppermint’s Editor-in-chief Kelley Sheenan spoke to several of the Creative Residents at the Adobe Max conference in Los Angeles last November, including illustrator Octavia Bromell. Julie chats food sharing, chimichurri and why she hates the word waste.

Is food waste something that has always interested you?

I haven’t previously worked specifically on food waste, but I found myself focused on it in my life in general. I grew up in New York and sustainability was not really on my mind. I grew up without ever seeing a compost bin.

When I moved to Seattle after graduation for work, I realised how much further along the city was with food waste specifically. It was this move that really inspired me to focus on reducing my personal food waste at home and now I’m tying it into my career to try to make it my full focus. There’s so much to do in food waste specifically and it’s a huge contributor to climate change.

Can you tell us about your project?

What I had set out to do is explore the food waste space and get a lay of the land in the beginning and identify what is working right now, what’s not being done and what’s not working. I had focused my project first around the prevention of food waste because that’s something I’ve noticed is often overlooked in big companies as much of it is tied to human behaviour and behaviour change.

So in terms of prevention, I’m developing an app that is focused on food sharing. This will help prevent food waste at home by enabling communities and small groups of people to share food. I’m also interested in composting – in trying to increase compost participation in large cities, especially those that have challenging infrastructure. So in New York, for example, where it’s super compact and there’s a lot happening, I’m looking at how to increase composting participation in order to then influence people’s behaviour with how they are actually throwing away food.

How does this tie into your work with design?

I think that designers really build the world around us – everything is designed. So I think design has huge power in influencing behaviour. With composting, for example, a large issue I’ve seen is around awareness – people don’t really know what they can compost, they think it’s kind of gross and they don’t really have an incentive to do it or can see how it fits into their life.

I think design has huge power in influencing behaviour.

So if we’re looking in a direction where we’ll have regulations later on with composting programs coming in, how do you empower people to want to compost and get them attached to the idea of it and actually feel good about it?

What I’ve found is that everyone feels guilt when throwing away food and throwing away things in general, and so if we have this shared sense of guilt, how can we design experiences or even design physical products to make it easier for people to start something like composting and put it into their life. 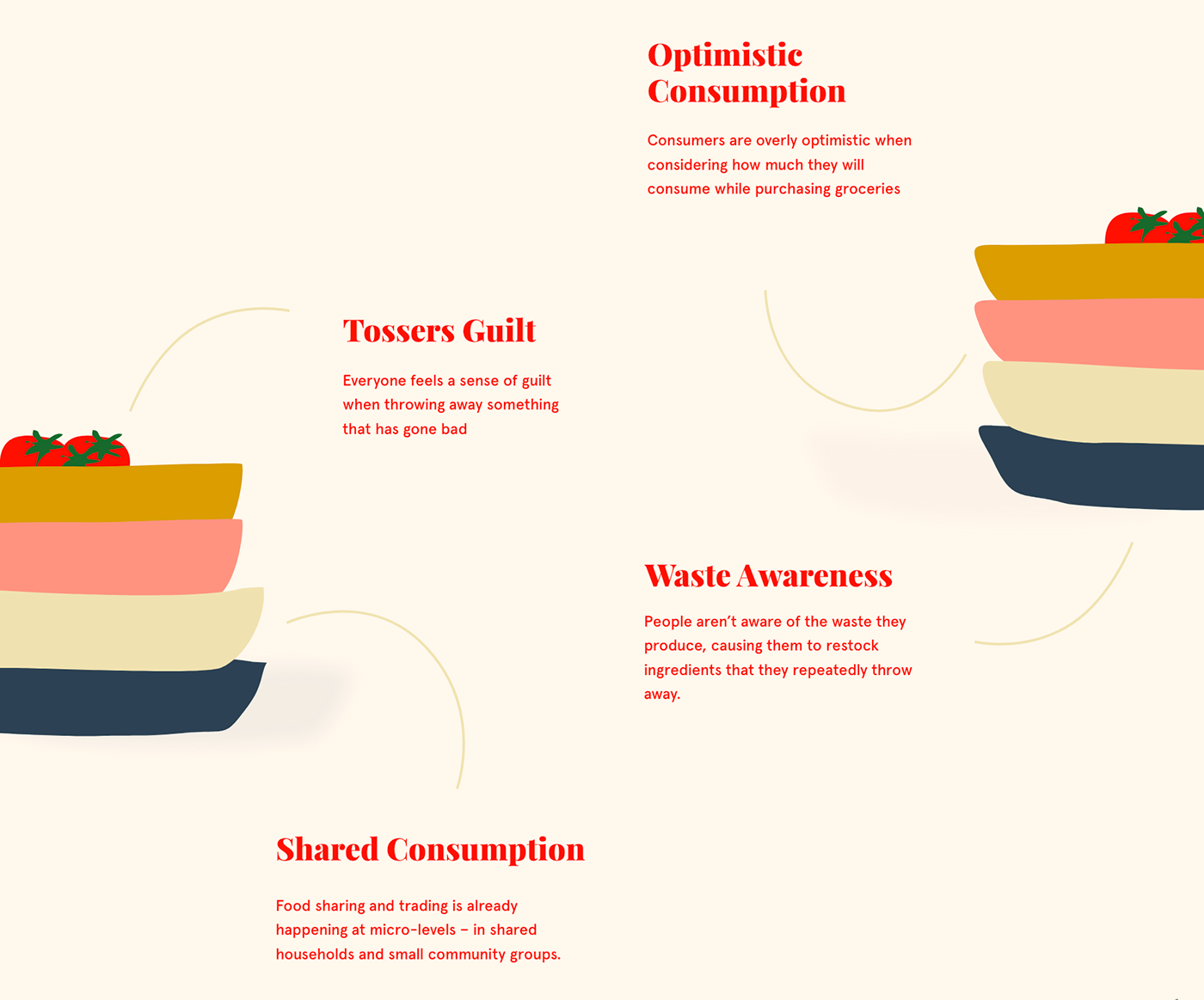 What are your thoughts on food waste in supermarkets, cafes and restaurants?

There are a lot of companies out there that are working on supply chain management as well as reducing waste in restaurants.

I previously worked at IDEO on their Food + Future CoLab, which was a program that was focused on how we can leverage emerging technologies to influence the future of food. We worked on a product that was understanding the nutrient value of food and it was an interesting application of what future technologies could enable us to do to understand how old the product is, how far it’s travelled and so on.

So with restaurants specifically, I think there is a big opportunity there to integrate technology into the workflows in order to reduce waste and predict demand. Food waste, I think if you take a step back and look at it, is really a distribution problem. We have enough food to feed the world currently, how do we redistribute it so that everyone has access to the food and it doesn’t go to waste? Sometimes I hate saying the word waste because it’s not waste, it’s just spare.

We have enough food to feed the world currently, how do we redistribute it so that everyone has access to the food and it doesn’t go to waste?

There have been a lot of initiatives coming out on how we can change the perception on what is the standard for good produce. We’re throwing away all this food that’s perfectly good and nutrient dense and we have people who are starving around the world. It’s unfortunate, but I think there is a lot of movement around changing that narrative.

What are your thoughts on food waste as a climate change issue?

Food waste in landfill is really just as bad as trash. I think that’s another misconception that people have, that they think it’s ok to throw out food because it’s biodegradable. The difference is that when it goes to a landfill, because of the environment of the landfill, there’s no oxygen. It produces methane and so it doesn’t just naturally degrade in our environment.

The other issue with conception is that we’ve kind of created an idea of what is food and what is waste. When I was trying to reduce my food waste at home, I started using everything. I stopped peeling carrots, as they taste perfectly fine if they’re unpeeled, and turned my carrot tops into chimichurri.

There are so many things that if we just change the way we look at those foods, we wouldn’t just naturally default to throwing away pieces of it because they can be turned into something really good. 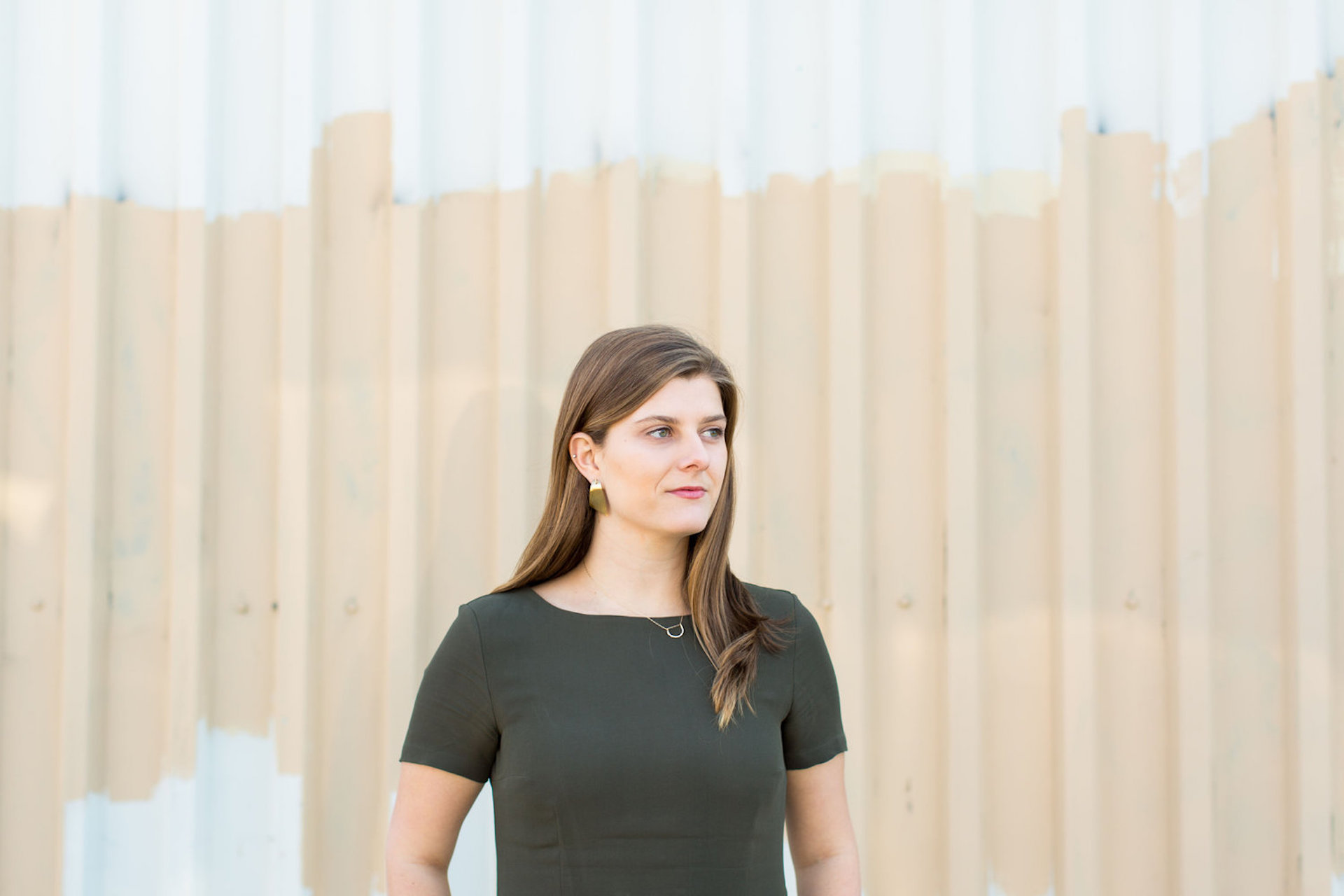 Do you find the people around you are on a similar journey?

Yes, I actually think I was highly influenced by the people around me. Especially when I moved to Seattle, there is a big culture around the environment as well as food waste specifically and composting, too.

It’s very much an environment thing, and it’s important to ask how to create that digitally as well. There is a big community, as well as online community, and I think going forward that community aspect will really influence people’s behaviour with getting passionate and realising the impact that they would have as just one person. Because they would, everyone would have an impact.

What tips would you give to people interested in changing the way they interact with food waste?

I think it’s about being more mindful, about taking the time to think about what you’re eating and what you’re throwing away. It can be as simple as the awareness of that. Take baby steps, start somewhere.

We have this big goal of zero waste, that’s a huge topic right now, and a lot of people think it’s impossible. But we don’t have to set big ambitious goals, we just have to start taking steps towards them and those steps can be as little as starting to compost, just trying it and seeing what you can do with your food.

We don’t have to set big ambitious goals, we just have to start taking steps towards them.

Think about how you can share food more often or plan before you go to the grocery store. So there are those small steps that you can implement in your life in order to reduce your waste and affect climate change. 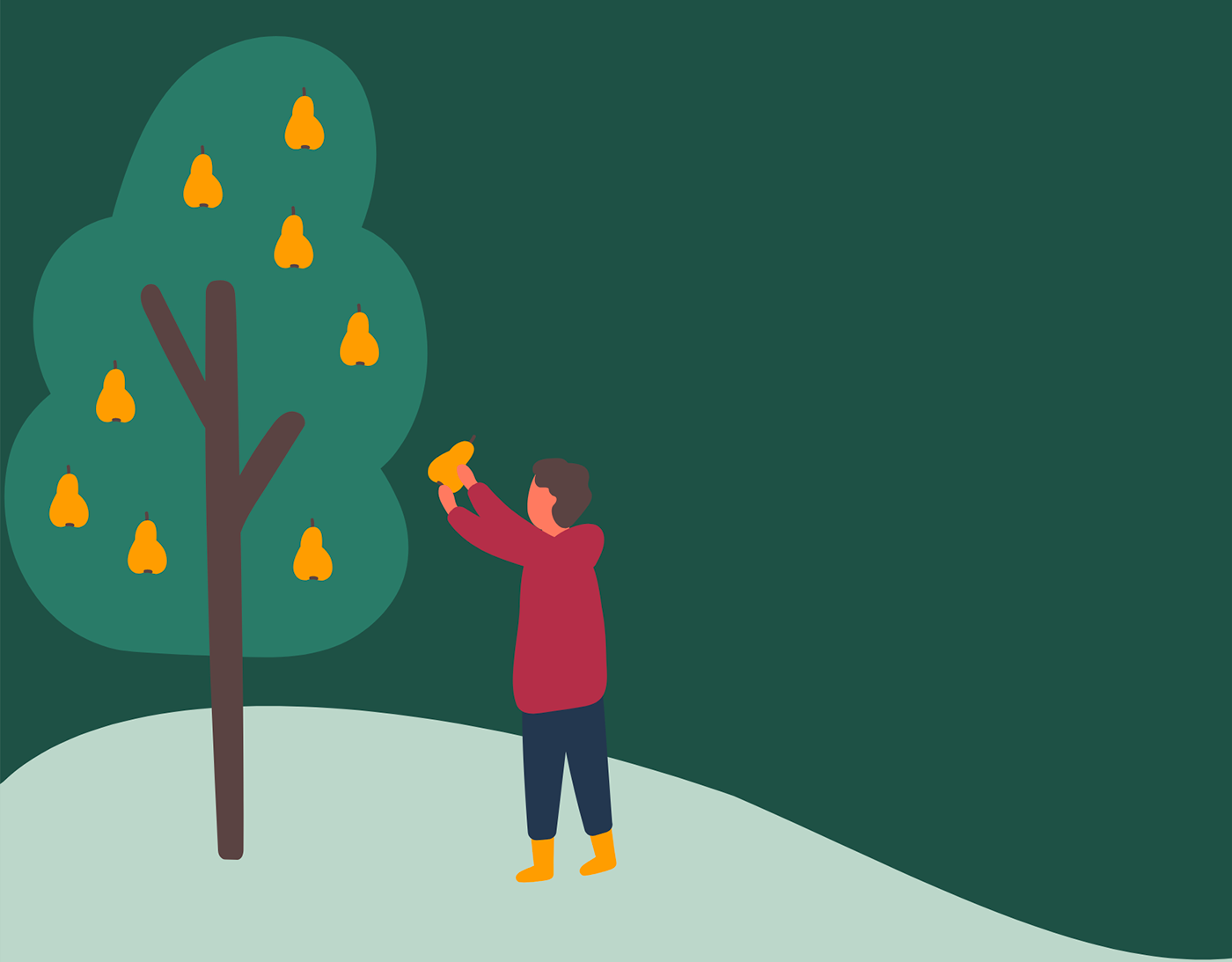 What’s next for you?

I really want to focus this year on having the time to explore and figure out where I could have the most impact as an individual and as a designer. I would love to be able to take one of those ideas or concepts that I develop forward and bring it to life – actually being able to have a tangible impact on this issue and then further grow from there as a creative.

My passion forever has been food so I would love to stick with that, but I also see such value in focusing on the broader waste issues that we have today.

To find out more about the Adobe Creative Residency program, head over here.