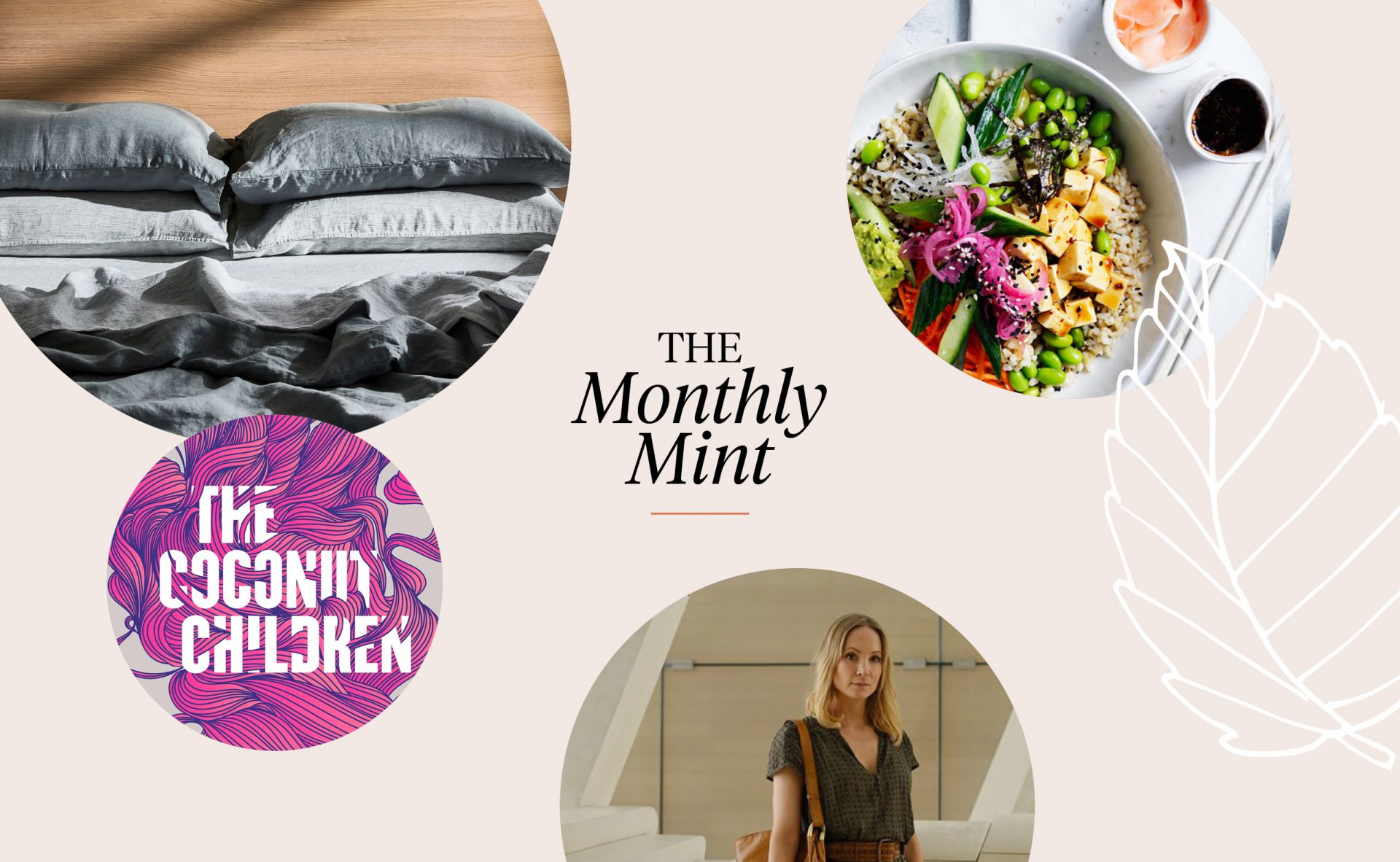 Welcome to a brand new online series we’re calling The Monthly Mint – a chance for you to join in the Peppermint office chat about all the things we’re loving and living for each month.

Here at Peppermint we’re forever on the hunt for the best in sustainable reads, eats and wears to inspire you all. But have you ever wondered what we are really liking in our off-screen lives? We thought we’d open our front doors (despite how messy it might be inside) and share a few of our favourite things. That way you get the chance to get to know us a little better and if you’re ever in need of a recommendation next time you find yourself stuck in the “I don’t know what to watch/wear/read?!” scroll, you know where to start.

I have to admit that I have been consuming anything and everything related to the current US political / conspiracy situation (and also how it relates to us in Australia, given how many in our community have fallen down the QAnon / disinformation rabbit hole). My main mind tabs are currently filled with episodes of the Conspirituality podcast; “A journalist, a cult researcher, and a philosophical skeptic discuss the stories, cognitive dissonances, and cultic dynamics tearing through the yoga, wellness, and new spirituality worlds”. I’m also squeezing in episodes of The Circus on Stan and highly recommend the Rabbit Hole podcast by NYT reporter Kevin Roose. On socials, I’m loving Azi @the.wellness.therapist, Rebekah Borucki @bexlife, @AsapSCIENCE and Abbie Richards @abbiesr.

I recently had to cave into buying pre-made meals for lunches because my time is spread verrrrry thin. I initially felt guilty doing it because of limited finances and the plastic waste aspect, but sometimes you have to pick your battles and recognise where you need help. After much deliberation I went with Eat Fit Food – and am loving it. The meals – which are surprisingly really good – are made from local and organic produce and are delivered in reusable cooler bags with reusable ice bricks. Admittedly I still don’t love the plastic waste… but they are working towards being the first zero-waste delivery company by transitioning to reusable glass jars, and when they do, I’m here for it!

When I’m not in public (you’re welcome), my at-home uniform consists of two mainstays: a Mighty Good Basics spaghetti strap singlet, and the ‘Bridgette Jones’ bamboo underwear from BodyPeace. These have been my go-to faves for several years and given the stay-at-home state of the last 12 months, they’ve been worth their weight in (ethical) gold!

Obviously the climate crisis is a hot topic in the Peppermint office so when The Commons, an eight-part series set against the backdrop of a climate-ravaged, dusty Sydney, popped up on my Stan recommendations (TY, algorithm) my interest was piqued. Touted as a “character-driven thriller” the compelling series tackles the very real, and very imminent threat of a litany of climate-induced catastrophes: increased animal-born viruses, population displacement, socio-economic tension and disparity, and the ethics of how we work to save the planet. Shots of sleek skylines and Sydney’s iconic streetscapes, blanketed by clouds of dust, with the odd flash of futuristic tech (facial recognition drones whizzing through public spaces, for example) the eerie bleakness of the content is exacerbated by the familiar setting – at times I wasn’t sure whether the vision was original or news footage from any of the increasingly common dust storms. Still, with a decent cast, slick production values and a well written script (overseen by award-winning writer behind The Code, Shelley Birse) it was enough to get me through the occasional ‘too close to the bone’ discomfort.

I’ve been a fangirl of clever journalists at The Feed for a while now and have followed two of the show’s alumni, Marc Fennell and Jan Fran, on through their various pursuits. In Stuff The British Stole, Marc, Australia’s next-gen king of candid interviews, takes his very natural, very relatable style and applies it to the elephant in the Commonwealth room: the art and artefacts in many of the world’s most highly regarded museums are where they are as the result of violent theft. It’s a conversation that’s been happening in the art world for a while now but there are so many ‘What the heck?’ moments as Marc weaves interviews with facts, historical anecdotes and colourful characters plus first-person narrative drawing on his own “genetic potluck” heritage. Produced by ABC Radio National, Stuff The British Stole is a wild ride into the heart of some of the world’s blatant art thefts, touching on themes of privilege, cultural appropriation and imperialism.

I’m on a mission this year to get back to my bookworm ways of old. It’s a bit of an uphill battle to be honest with a toddler and a bad TV binge habit, but I’m determined. I have an ever-growing tower of books on my bedside table but the one that I keep dipping into is Dark Emu by Bruce Pascoe, which is both heartbreaking and illuminating. I’m comforted by the fact that it’s now being taught in schools but, gosh, we’ve got a long way to go in terms of healing this beautiful country of ours.

I’m hunting for linen sheets at the moment and am obsessing over Bed Threads. I’ve been checking their website every second day, trying to decide what colour I love the most (they’re all so dreamy!)… but currently it’s a tie between Lavender and Petrol. Sweet dreams are made of these… Making the decision even more challenging is Bed Threads’ divine sleepwear – the linen Midi Dress is available in matching sheet colours so you can hide from small children entering your room at 5am!

If you’re not a football fanatic, the thought of watching a sitcom about an American Football coach who heads to London to manage a struggling Premier League team might not pique your interest. But hear me out because Ted Lasso is pure, unadulterated joy. Approaching everything thrown at him with generosity, curiosity and warmth, Ted is everything good about the world. It’s a lovely reflection of the human condition that speaks to our capacity for kindness and is completely binge-worthy with 10 30-minute episodes available on Apple TV+.

A gorgeous debut from a talented Sydney writer, I devoured The Inland Sea one well-spent day in the sunshine. It’s a heady story about a young woman coming apart over a hot Sydney summer, working a job at Triple Zero, interwoven with ruminations about climate crisis-inspired eco-anxiety and John Oxley’s journey to the mythological “inland sea”. A heavy read, and not one for those who need a meaty plot, but gosh-darn it’s a lovely piece of writing from Madeline Watts.

There’s something special about the thrill of setting off on a remote, overnight hike – an excitement to get back to nature and switch off from the rest of the world combined with the physical challenges that come with being alone in the bush. About two hours drive from Brisbane, Mount Barney is a force of a mountain and the second highest peak in the state. We had plans to summit earlier this month but after some nasty weather grinded that to a halt, we spent three days hiking through the foothills, exploring the overflowing rock pools and navigating chest-high creek crossings. If you’re in South-East Queensland, the Lower Portals make for a great day-trip (7.4km return) and are the perfect spot for a dip in the hot summer months but there are remote walk-in campsites scattered throughout the national park for more keen adventurers.

I’ve set myself two goals in 2021: to read at least 40 books (no mean feat when I have a job, two children and an unhealthy addiction to getting lost in Instagram reels) and to read more BIPOC authors. Funnily enough, I’ve turned to IG to help me in the form of #bookstagram. This hashtag will take you into a little corner of the internet full of thoughtful and diverse readers who are passionate about books and the big ideas within their pages. There is a bookstagram account for whatever you are into but some of my current favourites are @readbysez, @binchickenbooks (who also sells secondhand books through her feed), @decolonizeliterature, @lupita.reads and @blackfulla_bookclub. My TBR pile (that’s “To be Read” for the uninitiated) is looking very full!

The Coconut Children by Vivian Pham tells the story of Sonny and Vince, children of Vietnamese refugees living and surviving in Sydney’s Cabramatta in the 90s. It’s sweet and sad and I think Vivian in her debut perfectly captures the stomach-clenching joy of being 16 and in love with everyone who looks your way. I’m reading it slowly because there is only so much my heart can take in one sitting, but I’m absolutely captivated.

As Invasion Day approaches, it felt like the right time to invest in some new threads from K-Rae Designs (although honestly any time is the right time to support First Nations artists!). Designer Kimberly Engwicht is a Bundjalung and South Sea Islander woman and I love her range of cool tees, notepads, gift cards, prints and more. I’m so excited to get my ally-friendly “Always Was, Always Will Be” shirt and rock it on a certain upcoming public holiday.

My goal at the start of 2021 was to add some non-fiction to my reading list, starting with Boy On Fire, a biography of the early years of Nick Cave, my fave singer of all time. It’s such a beautiful and personal read, and the author Mark Mordue cannot hide his obsession with the man and the music, drawing on his own sense of the musical and literary inspirations behind specific songs. It made me understand more of the sheer genius and complexity of the man and his art.

Audiobooks mean that you are never idle, even when you are sitting still. I have “read” many works of fiction, but am now venturing into the memoir genre. Life With Picasso is the 1964 memoir by Francoise Gilot, the young painter with whom the much older Picasso had a stormy relationship, starting in Paris towards the end of WW2 and ending after 10 years and two children. She wrote the book in English rather than her native French, saying that she liked the shorter sentences that English allowed. It’s a great social and art history of a relatively quiet time in history. When Gilot describes the start of their love story and tells the reader the words Picasso spoke to her, you are drawn into her private moments and some breathtakingly romantic scenes. I’ve not finished the book, but I’m guessing things turned sour. Picasso tried to stop its publication, and there was opposition within the powerful art circle that Picasso inhabited, all working to damage Gilot as an artist but she had strength and stamina, and an amazing intellect.