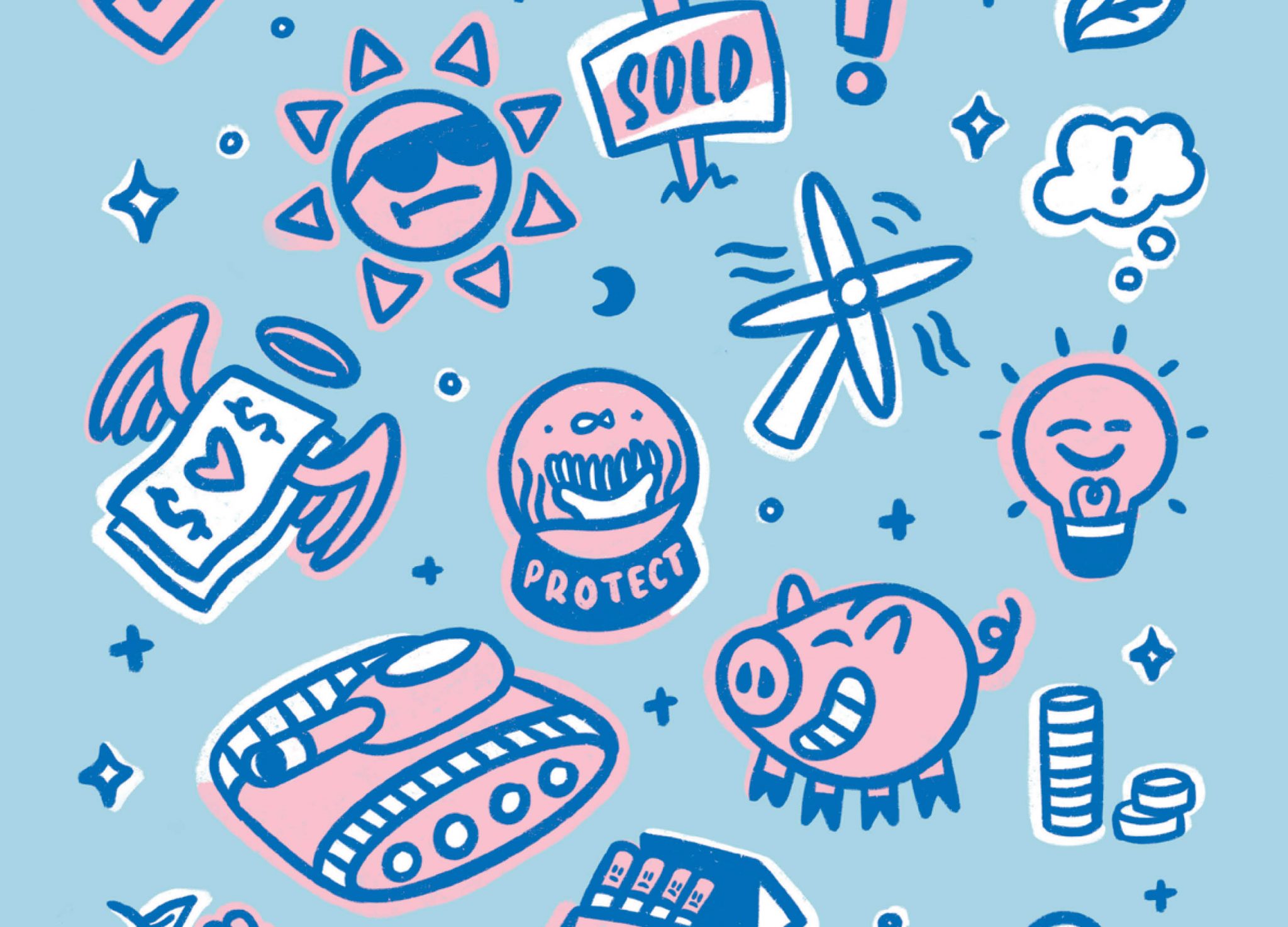 In Issue 41, we took an in-depth look at clean money – what it means, and why it matters.

With Australian banks under scrutiny, a growing number of people are choosing to cash in on an alternative, altruistic financial system.

Most of us trust a bank to manage our money when we’re not using it. When it comes to choosing what institution we use, interest rates, ATM fees and mobile apps often bear the most weight in our decisions. But have you ever stopped to consider the ethics of your bank, and what sort of ventures your hard-earned cash might be financing?

“The money you put in your bank account doesn’t just sit there waiting for you to take it out or to make a purchase,” explains Fiona Nixon, head of corporate affairs at Bank Australia. “The bank uses that money in the meantime, putting it towards its other business activities – which could include funding things you don’t agree with.” The country’s original customer-owned bank, Bank Australia, is pioneering a somewhat unorthodox approach to financial management: one built on accountability, integrity and transparency.

The Bank Australia ethos is underpinned by ‘clean money’, a concept that’s fast gaining traction around the world. “Most simply, clean money is money that does good rather than harm in the world,” Fiona says. “If you’re someone who cares about gender equality or climate change, and you’re making changes in your own life to align your behaviour to your values, it’s likely that you’d rather your money is supporting positive action and not contributing to the problem.”

Author and impact investor Joel Solomon has devoted his life’s work to disrupting the financial system. After inheriting a sum of money and struggling to find a way to align his economic decisions with his ethics, Joel co-founded Renewal Funds, Canada’s largest social venture capital firm. Since 2008, the B-Corp Certified company has proved there is money to be made by investing in organics and environmental technology. And you don’t have to sacrifice your morals to do it.

On the heels of his latest book, The Clean Money Revolution: Reinventing Power, Purpose, and Capitalism, Joel recently completed a speaking tour of Melbourne and Sydney. He was encouraged by what he saw here: “Australia is poised to lead the way globally,” he says. “All the intelligence, ingenuity, caring and savvy that it takes to change how money is made, invested and directed is there to be harnessed.”

Clean banking is about making sure the entire bank is responsible

More than 80% of Australians use basic financial products such as savings accounts. The landscape is dominated by the ‘big four’ – but research shows that we’re flexible. A 2017 report by the Australian Bankers’ Association, for example, revealed that in the previous three years, more than three million of us switched banks. Associate Professor Ben Neville is the director of the Asia Pacific Social Impact Centre at the University of Melbourne. An expert on corporate social responsibility (CSR) and business ethics, he’s interested in where banks fit in and how CSR influences consumer choices.

“The big banks are large, multinational corporations at the top of CSR rankings – and yet at the same time, they’re involved in an investigation on misconduct,” Ben explains. The Royal Commission into Misconduct in the Banking, Superannuation and Financial Services Industry, which handed down its final report in February, has exposed some troubling inconsistencies between how banks market themselves and how they behave.

“It shows how large and complex organisations are, that they can be fleecing their customers on one hand and on the other hand doing some impressive things,” Ben continues. “Generally, the funding of unethical actions has tended to not be recognised as important. Clean banking is about making sure the entire bank is responsible, and I would think that the Royal Commission will put pressure on the big banks to have everything aligned.”

One thing the Banking Royal Commission has opened the public’s eyes to – perhaps unintentionally – is just how monolithic and opaque our current system is. But at its core, it’s still underpinned by a group of individual customers and their transactions. Each time someone deposits a pay cheque or takes out a loan, there’s a ripple effect. For this reason, Joel Solomon believes that banking doesn’t fall beyond the bounds of personal accountability. “Every financial choice represents our essence as human beings,” he reflects. “Spending, saving, borrowing, investing, giving: these actions create our biography, reveal our beliefs and map who we are as the ancestors of the future. Today’s money responsibility is to choose investments that align with our highest aspirations.”

As conscious consumers, we might choose to buy organic food, support ethical fashion and carbon offset our airfares – yet at the same time, our financial decisions could be undoing our best efforts. “Our name is on our money,” Joel continues. “When we invest our money, we should know where it is, and who and what is affected by it. Scratch the surface of ‘an investment’ and find out the lifecycle story of how it is going to ‘make money’ for us. It may sound harmless, yet we often find that we are personally helping drive climate disaster, war, ecological collapse, horrific injustice, species extinctions and brutal poverty for billions of people.”

Nuclear weapons, coal seam gas and online gambling are just a few of the problematic industries tied up in the banking system. Institutions invest in such ventures as a way to net greater financial returns – but at what cost? “It is well-designed to be opaque, indirect and often complex to the level of numbing our inquiry,” Joel says of the closed-door operation that has got us to where we are today. Compared with other countries, Australia’s banking system is robust and secure – but it hasn’t been enough to stem growing dissatisfaction with the status quo.

Making money on the suffering of others, or the desecration of nature, or a bleak future for your descendants, is an empty victory

Ethical consumerism and the financial sector have started to dovetail. A growing number of institutions have shown a willingness to take up the mantle of responsible banking, and the landscape is slowly but surely starting to shift. In its 2018 report, the Responsible Investment Association Australasia revealed that responsible investment funds grew by 188% in the previous 12 months. The impact investing and community finance sector alone was up by an encouraging 94%. In a separate but related matter, more than 30 Australian super funds have divested from the tobacco industry in recent years, partly in response to customer demand.

“An important awakening is underway in the financial world,” Joel confirms. “The information era is allowing us to reclaim our power as citizens. Making money on the suffering of others, or the desecration of nature, or a bleak future for your descendants, is an empty victory. Working with institutions, professionals and products you can trust to know and be loyal to your values is key. That’s the best way to accomplish your goal of a cleaner money portfolio.”

This is the promise of institutions such as Bank Australia. First established in 1957 as a co-operative credit society, the nation’s first ever customer-owned bank answers to its clients, not its shareholders. It has adopted what is still considered a radical policy in the financial world: listening to its customers and responding to their desires. “We believe money and finance should be used to solve problems,” says Fiona. “We focus on responding to the issues that our customers tell us are important.”

Our customers have told us they don’t want to see the money they deposit in the bank used to make loans to support the manufacturing or sale of weapons.

Leveraging more than $6 billion in assets, the majority of Bank Australia’s funds are loaned to its customers. Any commercial loans are carefully screened against an in-house Responsible Banking Policy. “This outlines the industries we want to lend to because they create positive impact, such as community and disability housing and community renewable energy,” Fiona explains. Perhaps even more importantly, it sets clear boundaries for what customers’ money won’t be used for.

“For many years, we’ve had a commitment not to lend money to the fossil fuel industry, including coal, gas and oil extraction, and coal-fired power generation,” Fiona says. “Our customers have told us they don’t want to see the money they deposit in the bank used to make loans to support the manufacturing or sale of weapons. Weapons that are designed to cause maximum human casualties such as cluster bombs and landmines are causing terrible harm in communities around the world.”

“Most recently, we have decided not to invest in the live animal export trade and intensive farming, which are industries associated with a range of animal welfare, health and environmental issues,” Fiona adds. “We would like to see a future in which all farming values animal welfare, and we’re encouraged by the moves many farmers are making towards more compassionate, sustainable and organic farming practices.” Proving they walk the walk, Bank Australia itself stewards a 900-plus-hectare Conservation Reserve, in which every customer is a part-owner. A carbon-neutral bank since 2011, it has also committed to transitioning to 100% renewable energy by the year 2020.

Each time we make a conscious choice about our investing, we are accelerating the emergence of a more enlightened, positive future that is fair, clean and prosperous

Banking with an institution that values the environment and social sustainability doesn’t mean having to sacrifice on your financial performance. “Clean money shouldn’t cost any more,” Fiona confirms. “We work hard to offer our customers products, fees and interest rates that are competitive with other banks.” Bank Australia also offers extras that most other institutions don’t. “As a responsible bank, we put our customers first. We offer products and services that support their daily lives and help them achieve their financial goals. For example, we offer customers a pause on their home loan repayments to help them pay for eco-upgrades like solar panels or rain water tanks. We also recently introduced a lower rate car loan for electric and hybrid cars to encourage our customers to consider more sustainable choices.”

The road to a clean money revolution might be an information highway. As with many issues, greater curiosity from the public – matched by greater transparency from financial institutions – will pave the way forward. “An economic system is only as good as our emotional, psychological and spiritual wisdom,” Joel Solomon contends. “If you are inspired by the clean money revolution, start asking questions. Assess what is no longer negotiable for you. Look at how your money is representing you.”

“Each time we make a conscious choice about our investing, we are accelerating the emergence of a more enlightened, positive future that is fair, clean and prosperous. Each day is a blessing; every dollar is a chance to leave the world a better place.”