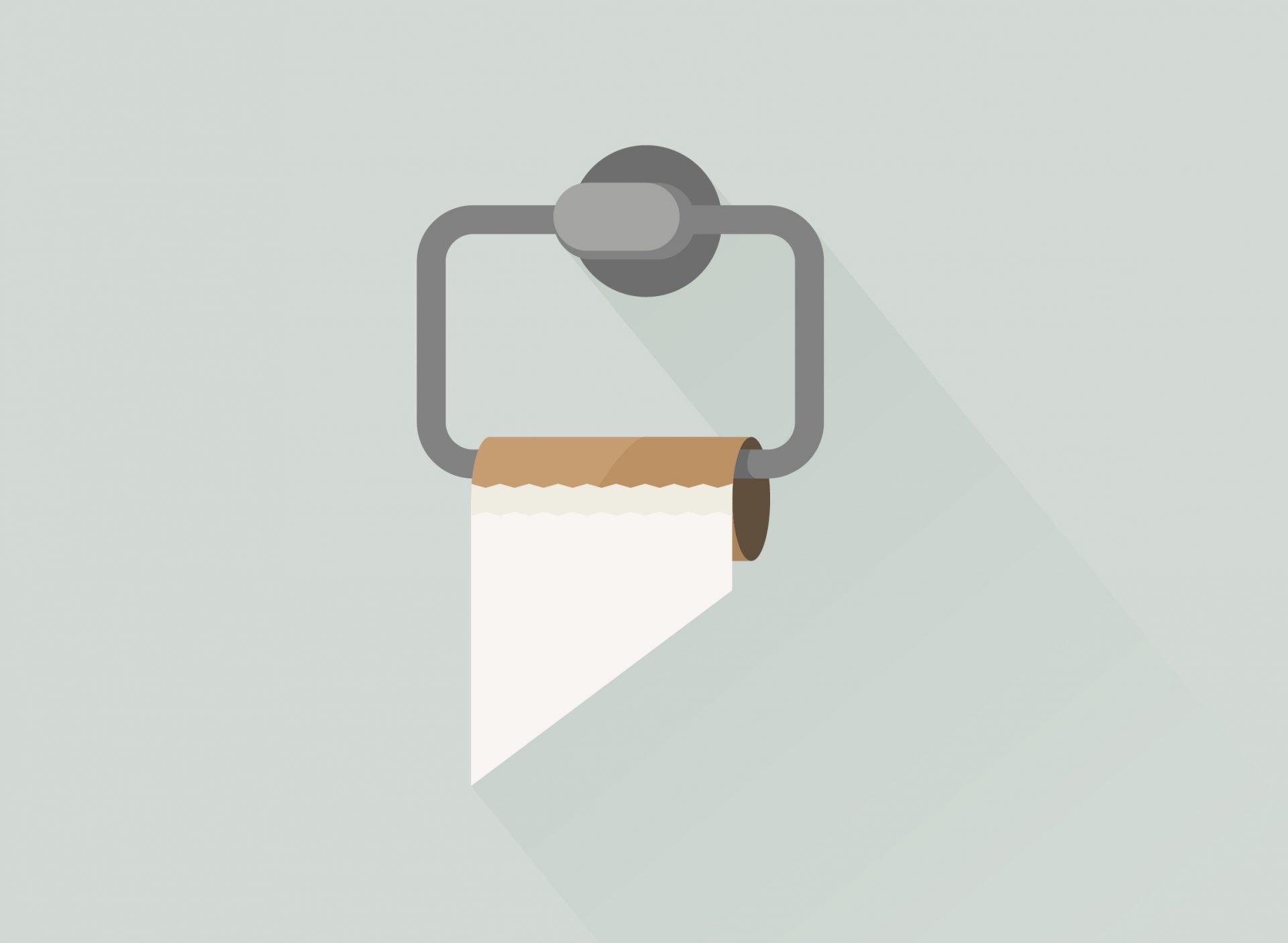 Environment | By Peppermint | 01/4/2020
When we put together our toilet feature in Issue 45, we had no idea just how timely it would be. While researching the environmental impacts of toilet paper, we had no possible way of foreseeing that it would become the most talked about topic this side (or actually, both sides) of the equator. As we wrote about in our article, flushable wipes were already a problem before the pandemic, but as the ABC has just reported, councils are battling a new problem with clogged sewerage pipes from toilet-paper-less consumers resorting to paper towels, newspapers and even old clothes. While many of the items we featured in our story are now hotter property than that last tin of tomatoes on the supermarket shelf, we’ve decided to share our roundup from Issue 45 – from bidets to reusable toilet paper (yes, it’s a thing) – to help you approach your bathroom breaks differently. Because no loo roll? No problem…
…..

Toilets: they’re a fact of life, and most of us don’t think twice when we pay our daily visits to the ol’ porcelain throne. But of course, it’s not just our (ahem) number ones and twos that travel the pipes – we flush all manner of things down the loo, and it turns out that most of them are a real source of constipation for the environment.

Let’s start with toilet paper. Sadly, our trusty TP isn’t as kind to the planet as it is to our posteriors. It’s basically a single-use paper product and, on average, each of us uses 57 sheets a day – that’s the equivalent of 384 trees over the course of a lifetime. And it’s not just the trees that are getting a bum deal – it takes 37 gallons of water to produce a single roll of TP, and manufacturing and transportation uses 17.3 terawatts of electricity every year. According to theworldcounts.com, the loo roll we use could stretch around the planet every two minutes, or travel to the sun and back every 10 days.

…the loo roll we use could stretch around the planet every two minutes, or travel to the sun and back every 10 days.

But toilet paper is only part of the problem. Studies show that we now use 14,000 wet wipes every second. And so-called ‘flushable wipes’ are anything but – according to Sydney Water, they’re responsible for 75% of sewer blockages in the city’s waste-water system because they don’t break down in the way toilet paper does. Most wipes are specifically designed to be robust, and are often reinforced with cellulose and viscose along with cleaning products and chemicals.

In 2017, a 130-tonne, 250-metre-long ‘fatberg’ – literally a giant mass of congealed fat, nappies, baby wipes and other things straight from the loo chute of your nightmares – blocked an entire section of London’s sewage network, taking nine weeks to clear. Parts of the Whitechapel fatberg went on to be displayed at the Museum of London, with curator Vyki Sparkes saying: “We are all a little bit responsible for the existence of fatbergs. That’s the power of an object: visitors are actually con- fronted by the waste our society creates. If people walk away and think a little bit about how these things are created and what our role has been in them, that’s my job done.” The Whitechapel fatberg was not an isolated case: many others have been found since.

Studies show that we now use 14,000 wet wipes every second. … They’re responsible for 75% of sewer blockages in the city’s waste-water system because they don’t break down in the way toilet paper does.

It’s interesting to note that only 30% of the world’s population uses toilet paper. In Japan, more than 80% of households use bidets – the same goes for many European countries, including Italy and France, where bidets originated. Most Southeast Asian countries also use water for cleansing. Bidets are not only more hygienic than toilet paper, but also much less taxing on our wallets, our water and our world.

We can’t keep washing our hands of this problem – our environment’s (literally) going down the drain – so we’ve found a few different toilet products, from bidets to bamboo, that can help make your trips to the can a little more eco-conscious. 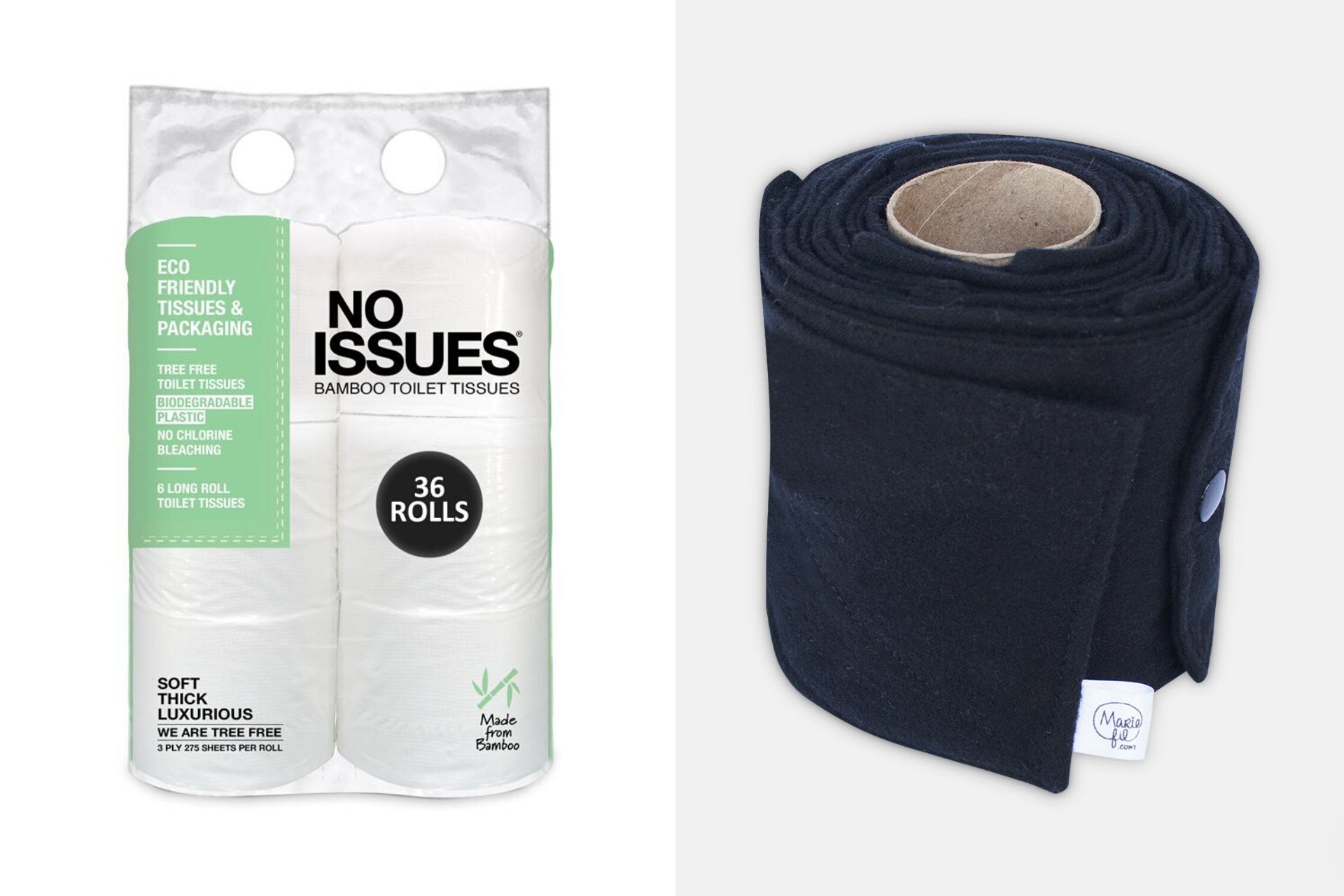 Made from bamboo and sugarcane fibres, the unbleached toilet tissue from No Issues is a more sustainable option than its tree-based counterpart. Bamboo is a fast-growing plant that can be harvested in a much shorter timeframe than virgin trees, making it better for both your own behind and the environmental impact you’ll leave behind.
noissues.com.au

Yep, it’s a thing – and judging by a quick Google search, it’s not a thing the internet is down with. However, it’s our job to let you know what your options are, and this is one of them. There’s a plethora of ‘unpaper’ options (also known as ‘the family cloth’) on Etsy – essentially glorified wash cloths in squares or snapped-together rolls to be washed and reused. Fan(ny)s world- wide extol their softness, and their money- and planet-saving virtues.
mariefilcreations.etsy.com 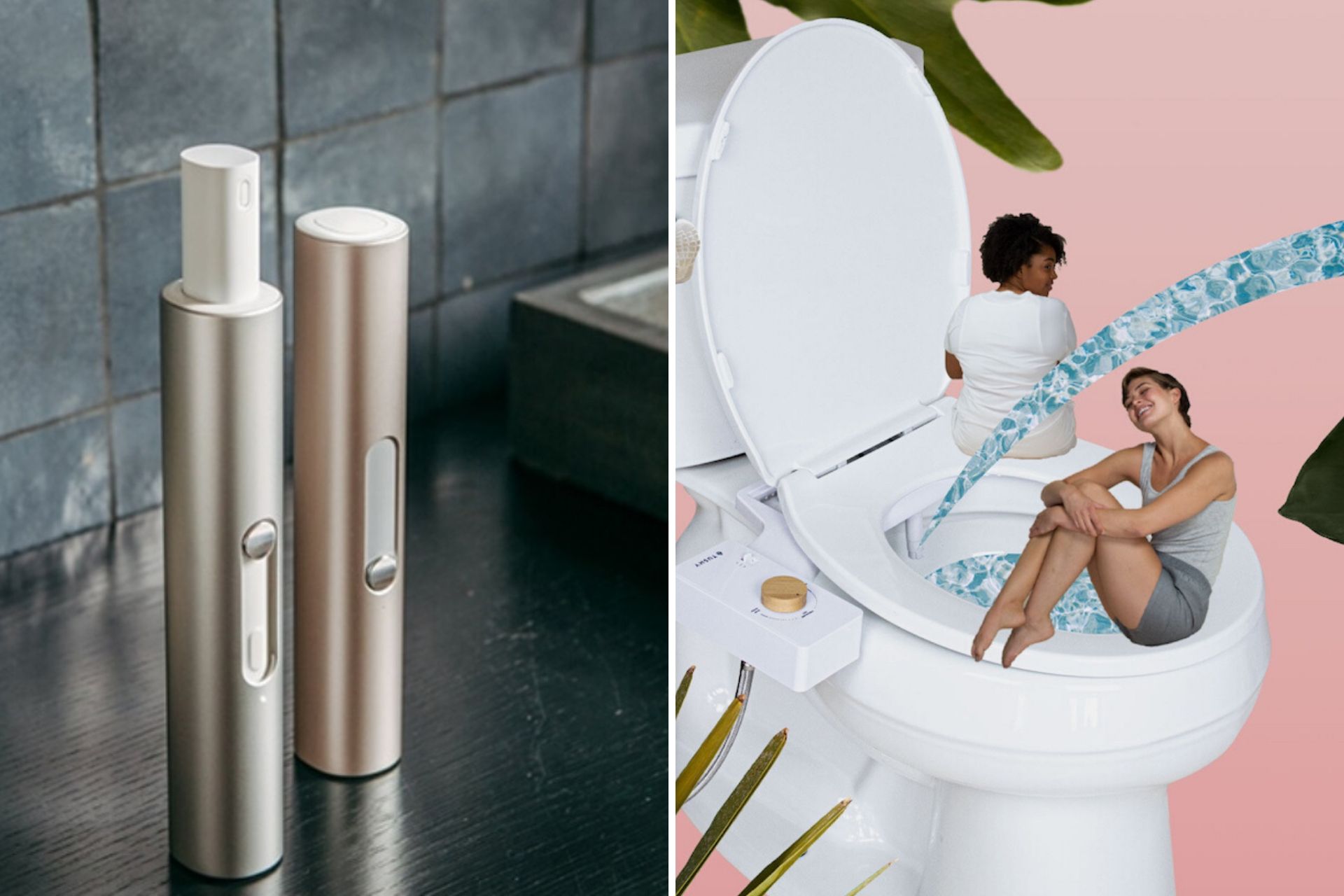 With its sleek, minimalist design, the Sonny portable bidet looks like it would be more at home in an Apple Store than a bathroom. This rechargeable handheld device is designed to “wipe away the past” – aiming to reduce your environmental burden while increasing personal cleanliness. The Sonny raised almost $1.8 million in crowdfunding, and is still in its production phrase – for a sparkling clean, happy posterior, you’ll have to wait until May 2020.
sonny.com

Founder of Thinx period underwear Miki Agrawal has now set her sights on another startup that’s focused on our nether regions. With similarly irreverent ad campaigns, the Tushy is a bidet that reduces water usage and eliminates toilet paper, attach- ing easily to your toilet’s water sup- ply without plumbing or electricity. Various pressure controls combined with a nozzle adjuster help you get the clean booty of your dreams, and Tushy also sells washable bamboo cloth towels to pat your privates dry after each wash.
hellotushy.com 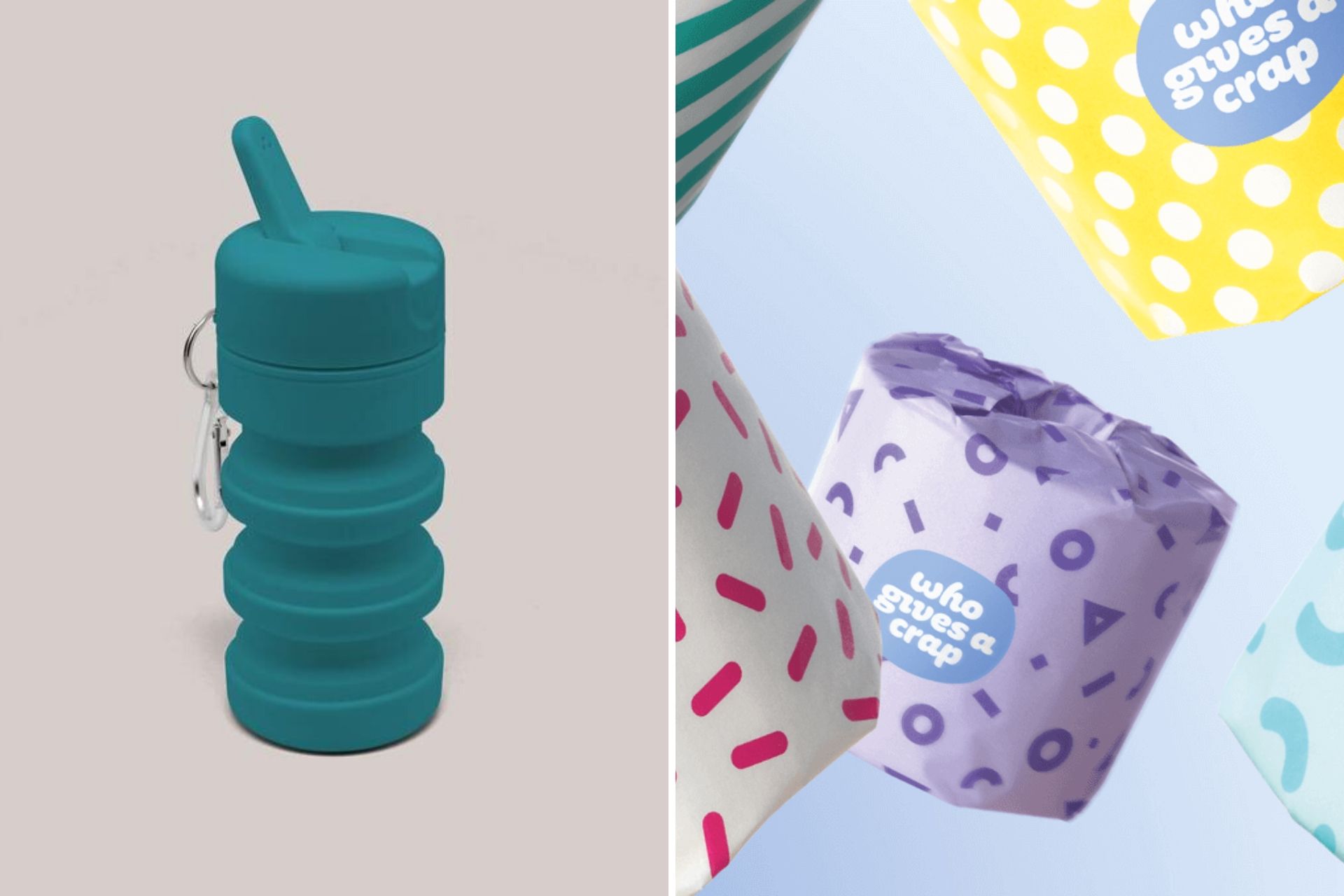 Also from Tushy is the portable travel bidet, which looks a little like a reusable water bottle – perfect for being inconspicuous, possibly less so for accidental mix-ups. Tushy Travel is a collapsible squeezy bottle with a hinged nozzle and a carabiner for popping on your handbag when pooping on the go. You’ll likely need a good aim and some TP to dry off afterwards (unless you want to cart around reusable cloths – insert shudder emoji here), but your clean, smug, eco-conscious, well-travelled rear end will thank you.
hellotushy.com

WHO GIVES A CRAP TOILET PAPER

Social enterprise Who Gives A Crap certainly do just that – they donate 50% of their profits to help build toilets for those in need and improve sanitation in the developing world. They also aim to save trees, water and energy with their 100% recycled toilet paper that’s delivered to your door with an ongoing subscription – meaning you’ll never have to make an emergency supermarket dash again. For discerning derrières, their premium bamboo range has a lower impact than virgin pulp paper.
whogivesacrap.org

This article was originally published in Issue 45.