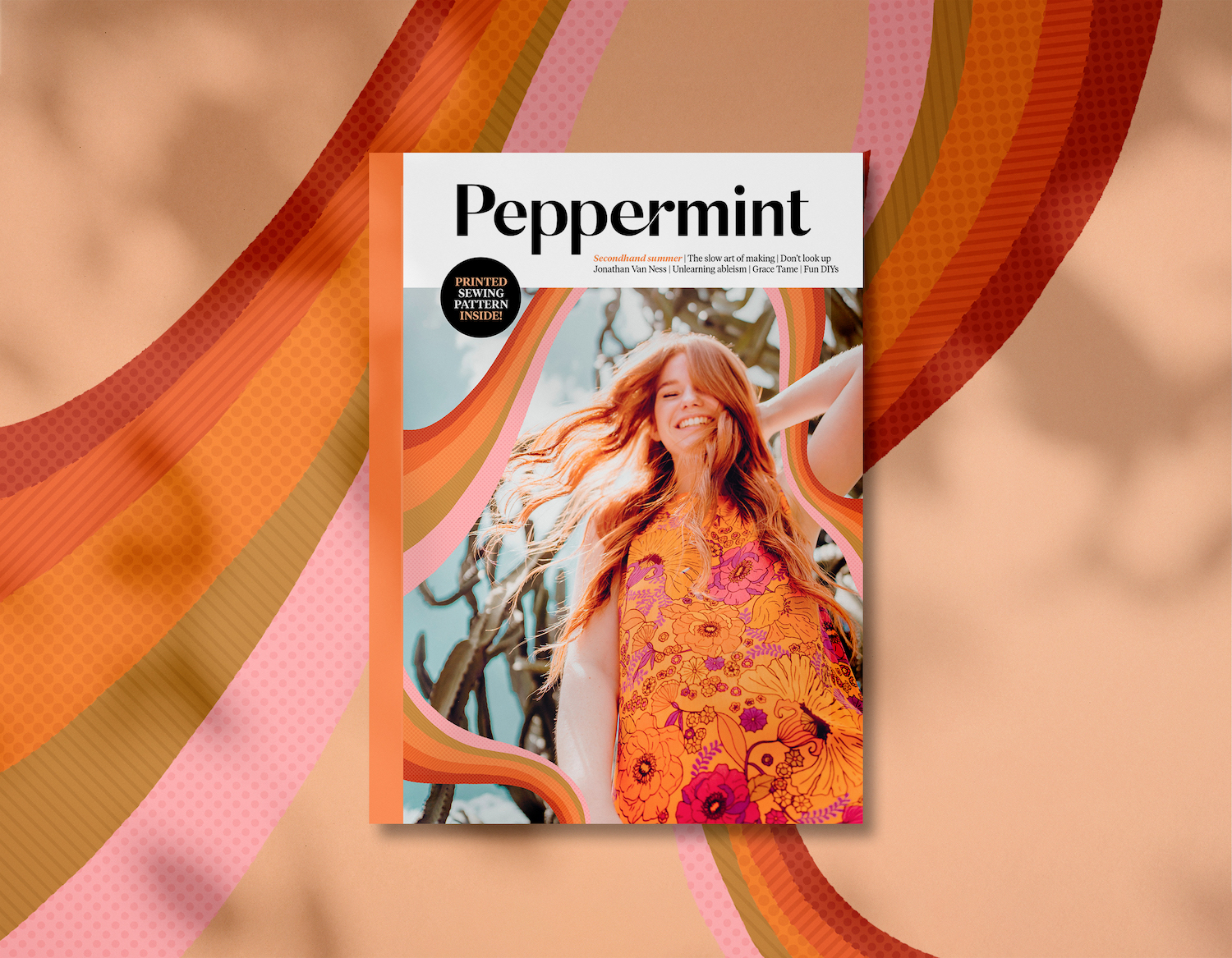 Time has a funny way of catching up to you. While, for me at least, it felt like the year had been dragging on, now the months are smudging together and I don’t quite know what to do with myself.

It seems pertinent then that time, or rather slowness, has infiltrated her way across the pages of our new issue. We time travel back to the ’70s and embrace a secondhand summer for our cover shoot, up-and-coming photographer Josie Fawckner explores the art of slow, and we chat to Japanese ceramicist Kazuya Ishida who brings mindfulness and meditation to his practice.

Elsewhere I had the absolute pleasure to interview climate scientist Peter Kalmus about the necessity of civil disobedience, we share an exclusive extract from Grace Tame’s new memoir, Carly Findlay pens a personal essay about unlearning ableism and activist Shaneel Lal shares their fight against conversion therapy. We chat with musician and activist Jack River, dive into the evolution of sewing circles and go behind the seams with The ANJELMS Project and Ngali. We screech-in to Newfoundland, road-test an electric car and take a visit to sunny North Queensland. There’s an easy, breezy, beautiful DIY t-shirt dress, a snazzy crochet bag pattern and, of course, our stunner of a free pattern – the Peppermint Rosalie Skirt. Oh… and just a casual chat with the one and only Jonathan Van Ness. Can you believe?!

We all know the algorithm we find ourselves drawn to presents an ideal – its ‘fastness’, immediacy and ever-knowing presence in our lives can feel like a challenge. Do more. Read more. Write more. Post more. We’re all chasing something but that chase is an impossible one. It’s important – so important – to stay connected, to understand the world beyond our immediate scope, to break out of our bubble, but human connection is far more complicated and comforting than mere binary code.

Here’s hoping you find some time to slow down this summer – to switch off and connect to something in these pages. If anything, JVN said he adored us – cue bursts of rainbows in our proud little hearts. 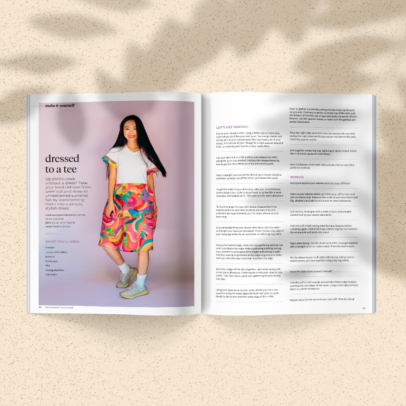 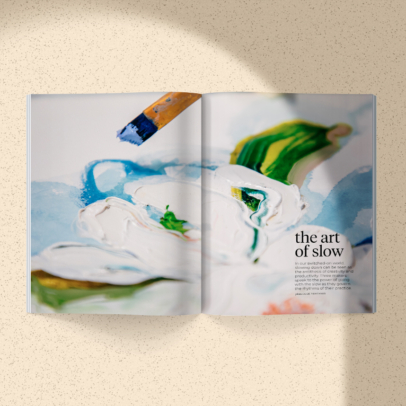 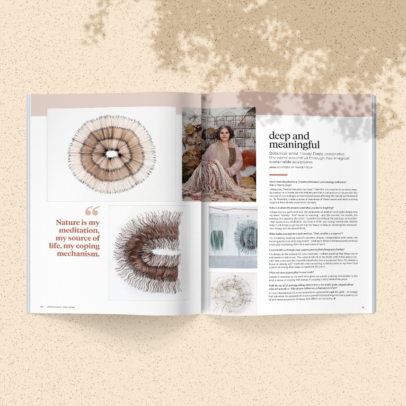 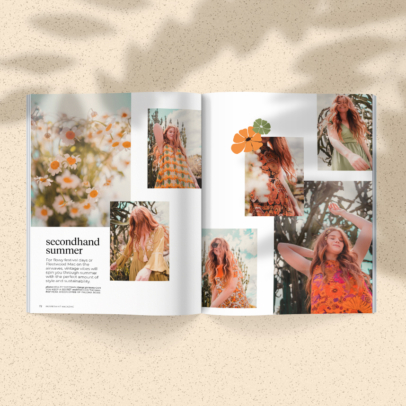 Take a peek inside this issue!

‘HOLLY, GO LIGHTLY’ Holly Rankin, known by her stage name Jack River, is currently expecting her first child. Becoming a mum will be the cherry on top of a remarkable few years of prolific creative, personal and political work. Words by Cat Woods.

Music has been Holly’s creative outlet since the age of nine when she first began to write songs. It opened the world to her and perhaps attuned her own voice to the sound of the natural world. Released in September last year, her psych-folk single ‘We Are the Youth’ harked to the sense of urgency that she felt and witnessed among other young people for a world that reflected their values and vision. “There’s a lot in that song,” Holly concedes. “It’s about the movements that young people are driving right now globally. Especially from 2017 to 2019, it was young people driving the leadership around the climate crisis and the Black Lives Matter movement. I felt the need to write it after I performed to 80,000 people at the climate strikes in 2019 at the Domain in Sydney. I got off the stage thinking, ‘I don’t have the perfect song for these young people. I can’t do anything else until I do that.’ I sat down and this chorus came to me, and it’s dedicated to every young person and everyone working within the climate and energy movement. At the same time, I felt like I couldn’t not try to represent how people were, and are, feeling about Black deaths in custody in Australia, and the links between Indigenous rights and climate justice.”

I got off the stage thinking, ‘I don’t have the perfect song for these young people. I can’t do anything else until I do that.’ I sat down and this chorus came to me, and it’s dedicated to every young person and everyone working within the climate and energy movement.

‘WHAT’S IN A NAME?’ The English language is scattered with seemingly innocuous words that have oppressive and eugenic histories. How can allies broaden their perspectives and grow their understanding of disability through language? Words by Carly Findlay.

One of the hardest things about being disabled and a disability activist is seeming like the fun police when I call in people for using disability slurs.

Every time I talk to a friend about them using ableist language, I take a deep breath and hope that I don’t lose them. I have lost countless friends when I’ve asked them not to use a slur. Celebrities I admire have unfollowed me, some even blocked me. I am most sad when these people are also from marginalised communities and call for racist, homophobic and transphobic slurs to be eradicated.

I open my message by saying that maybe they weren’t aware that the word they’d used was a slur, collate some links specific to this slur and gently talk about the impact of ableist language on disabled people.

I now sign off from my messages, “I write this with love, education and respect, and hope that it’s received in the same way.” 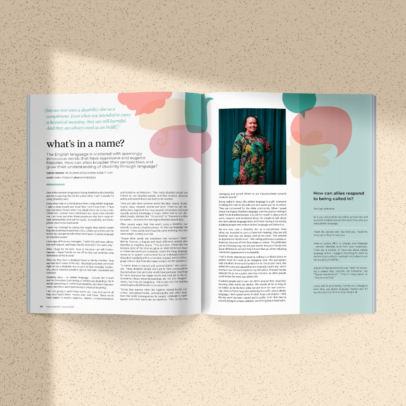 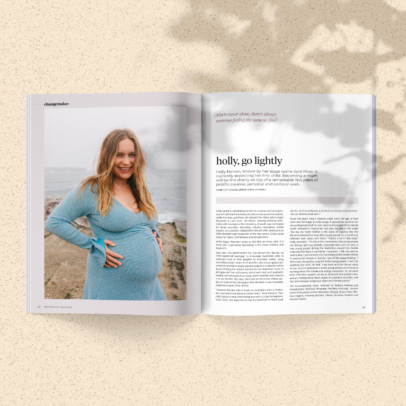 ‘SOUND THE ALARM’ NASA climate scientist Peter Kalmus was arrested earlier this year during a peaceful protest. A video of his desperate pleas calling for action went viral. Here, he speaks to the power, place and passion of civil disobedience.

I had a sense of desperation. Nothing had really seemed to make much of a dent at all. And over the course of my 16 years of activism, it just kept getting worse every year. It’s really bad now. Like, really bad. And it seems like people still don’t get it. How can we have so many floods and fires? How can a third of Pakistan be underwater? How can food prices skyrocket? We’re starting to see crop failures. We’re starting to see these crazy heatwaves that always seem to set off fires, at least in the subtropical regions like California and parts of Australia, Spain and Italy. But how can all this happen and people still not understand what a very serious situation our species is in right now, not to mention all the other species on the planet? And for what? Being able to fly around in planes? Being able to buy plastic stuff that we throw into the landfill after a few days? Why do we live this way? People seem to be more stressed and depressed and anxious than ever before, even apart from climate breakdown. I just don’t understand what’s stopping everyone from basically saying, “We need to hit pause on this.”

How can all this happen and people still not understand what a very serious situation our species is in right now, not to mention all the other species on the planet?

‘SEWCIAL GATHERING’ Sewing circles may look different in the twenty-first century but what goes around comes around in the sewing world as community stitches friends together. Words by Nicole McKenzie.

Historically, sewing was a social activity – groups of women hand-stitching, conversations flowing. However, in the 1900s, as sewing machines became standard home appliances, these communities dissipated. Interest in sewing increased significantly during this time but large, heavy machines trans- formed sewing into a solitary, home-based activity. Women still machine-sewed in groups at classes and at their poorly paid jobs, but speaking over the loud machines was near impossible.

Indeed, sewing was not a hobby but rather an essential skill for women – making and mending clothes was part of daily life. During World War II, while sewing machine factories were retooled for war production and fabrics became scarce, government campaigns in the UK encouraged women to “make do and mend”. Women repaired clothes, made slimline dresses from minimal fabric and, after the war ended, made underwear from parachutes.

Post WWII, sewing remained a popular activity, but in the 1970s, as more women entered the workforce and pre-made clothing became increasingly affordable, the popularity of home sewing steeply declined.

Now, sewing machines are lighter and more affordable still – making sewing meetups and classes more accessible – and the internet has made learning and connection easier than ever before. Sewing has had a resurgence and, with it, a lively and supportive international sewing community has emerged. 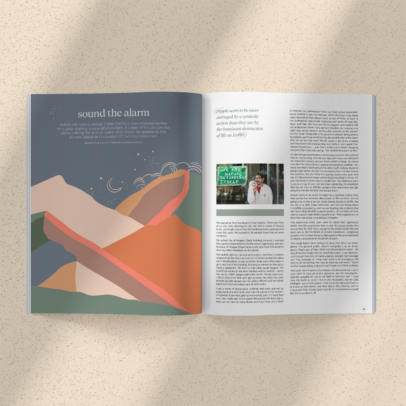 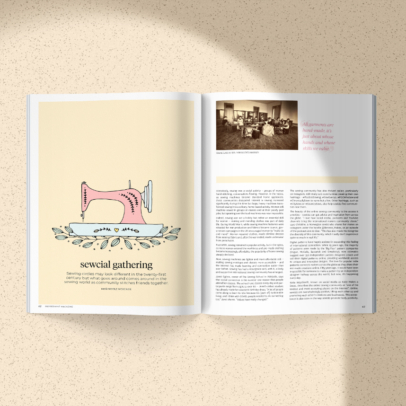 ‘LOVE DON’T NEED A CURE’ Conversion therapy was finally banned in Aotearoa earlier this year. But it’s high time the rest of the world caught on. Words by Shaneel Lal.

I was born in colonised Christian Fiji when homosexuality was a crime. The words homosexual, gay and trans did not feature in our vocabulary, but people used derogatory terms such as “chakka” and “gandu” to describe queer identities. Others knew I was queer before I did. I was so feminine for a boy, it verged on rebellion.

I wasn’t a boy and I was not heterosexual either. The elders in my village took it upon themselves to “cure me” of my queer- ness: praying, encouraging me to snap myself with a rubber band and, at the height of it, beating. None of it ever changed me, but the religious leaders instigated enough fear inside of me that I never wanted to be myself again.

As a kid growing up in a small Fijian village, I was isolated from the world. I did not have a phone or a computer. The only thing I had ever known and loved was my family and community. The church leaders weaponised my love for my family and community against me. They told me that if I did not change, my family would disown me and my community would banish me. They condemned me to burn in hell. No one would accept that fate.

I am lucky I chose to stay. Many do not.

They say time heals all, but that’s impossible. Oxygen both sustains life and causes decay. And so we must live, and die one day. There is no moving past, there is only moving with.

‘RUNNING FREE’ In this extract from her memoir, 2021 Australian of the Year Grace Tame speaks to the survivorship, transformation and transcension she found by “running wild and running long”. Words by Grace Tame.

The good and the bad. It’s all enmeshed. They say time heals all, but that’s impossible. Oxygen both sustains life and causes decay. And so we must live, and die one day. There is no moving past, there is only moving with. You can’t hold secrets at bay forever. They’ll consume you one way or another.

From Years 3 to 6 I played soccer, and was the only girl on the team. I was never any good. I think I scored one goal in four years. It was endurance that was my strength. The coach usually put me on the right wing because I never seemed to tire. That was something else I learned to love at Cambridge [Primary]: running. Running wild, and running long. I carried that love with me into high school, and retain it now. Its raw, transportive power; a moving meditation that sets me free.

I did lose touch with it for a time. Quite suddenly, unexpectedly, in one fell cold and brutal swoop. 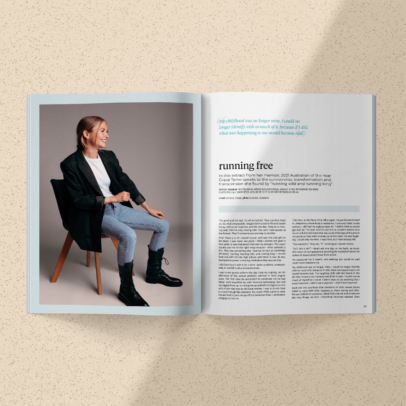 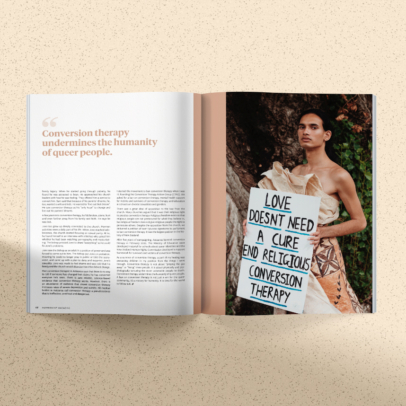