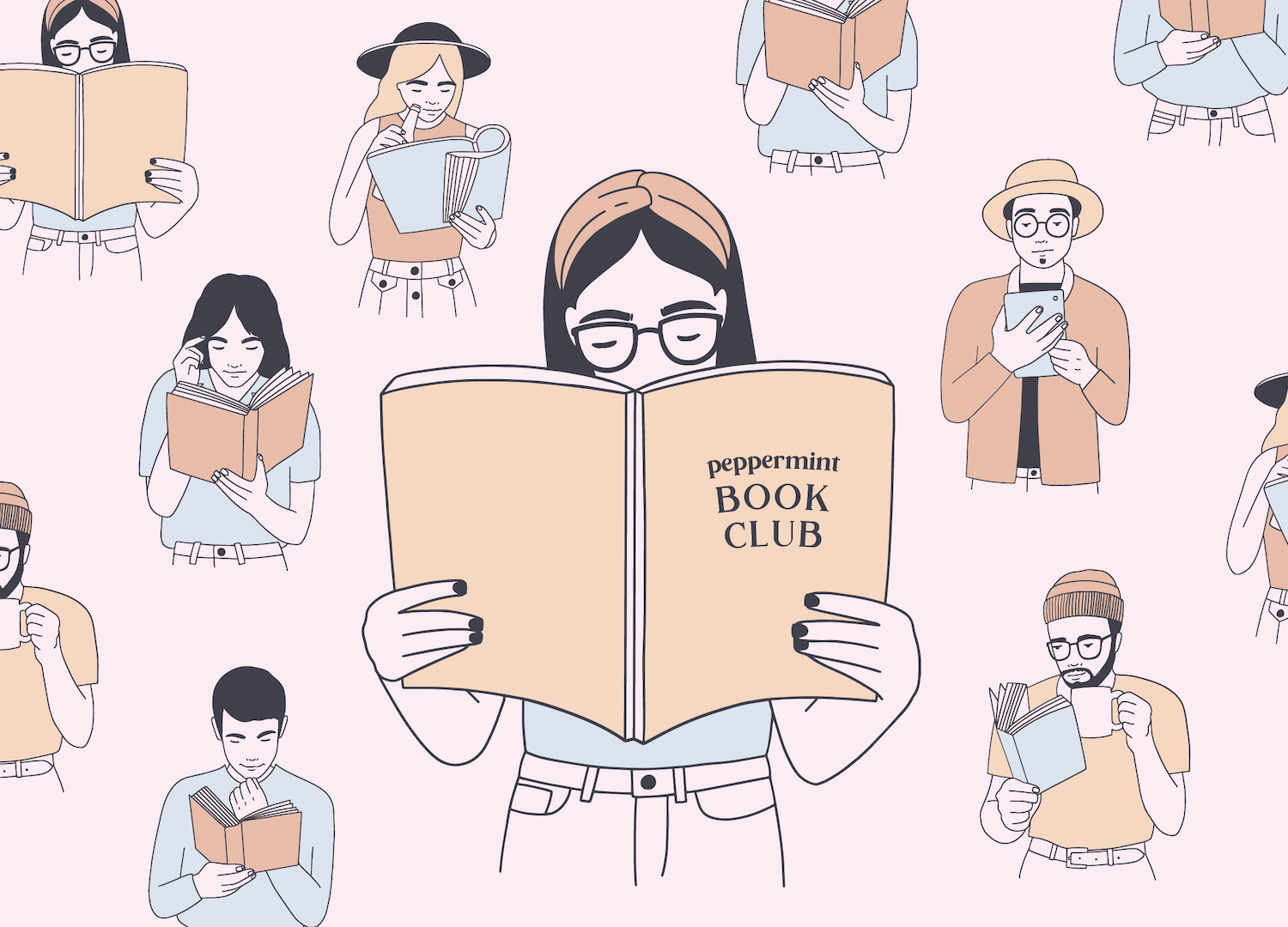 If there’s one thing better than curling up in your favourite nook with a page-turner of a book, it’d be gushing about your latest read with your closest friends. As JD Salinger’s protagonist says in The Catcher in the Rye, “What really knocks me out is a book that, when you’re all done reading it, you wish the author that wrote it was a terrific friend of yours and you could call him up on the phone whenever you felt like it. That doesn’t happen much though.”

With the idea of promoting good books, good reading and good conversations, we’ve decided to start a Peppermint Book Club – a space where each month we ask one of our favourite independent bookstores to curate a list of recommendations and tell us why they love them.

Amplify Bookstore is Australia’s first and only online bookstore dedicated to selling books written by BIPOC authors. Founded in 2020 by Marina Sano Litchfield and Jing Xuan Teo, their mission is to platform and amplify books by BIPOC authors – which only make up 10–15% of publishing output – recognising that readers of colour have been historically left out of the narratives that we consume.

If you loved Encanto, you have to reach for The Inheritance of Orquidea Divina by Zoraida Cordova. It is a beautiful and creative exploration of generational trauma and family history – gentle and curious, but sometimes dark and full of intrigue.

The Sunbearer Trials by Aiden Thomas is the perfect book to pick up if you’ve ever loved the world of Percy Jackson, from the author of Cemetery Boys. Rooted in Mexican mythology, it follows Teo – a trans semidiós and son of the goddess of birds – who, against the odds, ends up in the Sunbearer Trials, battling it out to carry light and life for the Sun… and to avoid being sacrificed.

Ophelia After All by Racquel Marie is like a warm hug in book form. In her final year of school, Ophelia just wanted to hang out with her friends, keep tending to her roses and basically, just be. Instead, she’s wrapped up in friendship dramas, the realisation that she might be queer and the ramifications of that on her previously rock-solid self-image. (But don’t worry, this one’s all about queer joy, not tragedy).

If You Could See the Sun by Ann Liang is the Asian-led campus novel we’ve been waiting for: Alice Sun has never felt like she fit in at her elite boarding school, but when she suddenly gains the power to turn invisible, she realises she has a tool to access all the secrets of the super-rich. But with growing stakes – and an enemy who might just become a lover – she has to figure out how far she’s willing to take her schemes.

Song of the Sun God by Shankari Chandran is the anticipated new novel from the author of Chai Time at Cinnamon Gardens. Beginning in Sri Lanka in 1946, it follows a young couple who begin their married life while growing ethnic tensions simmer until they bubble over into a bloody civil war. It’s a multigenerational epic that spans continents and is a sure hit for lovers of historical sagas.

From the bestselling author Celeste Ng, Our Missing Hearts is an old story made new – looking at the ways supposedly civilised communities can turn a blind eye to the most searing injustice. The novel is lyrical, chilling and empathetic. Touching on the rise of anti-Asian hate, censorship and book burning, it is a deeply heart-wrenching novel about the unbreakable love between a mother and child in a society consumed by fear.

You can’t be a reader of sci-fi and fantasy without reaching for Fledgling by Octavia E Butler. The novel follows Shori as she awakes injured in a cave with no memory of how she got there. While Shori appears to be a 10-yea- old African-American girl, she is, in fact, a 53-year-old vampire. Forced to discover what she can about her stolen former life, she must at the same time learn who wanted – and still wants – to destroy her and those she cares for and how she can save herself.

A Career in Books by Kate Gavino is a hefty new adult graphic novel following three young Asian American women as they start their careers in publishing in New York City – and their growing closeness with their new neighbour, a mostly forgotten Asian American literary legend. This book is deeply relatable for anyone who does work in books, but also for anyone navigating their career, relationships and the expectations of others.

Set in the future, Enclave by Claire G Coleman follows Christine as she escapes her walled city after being caught kissing a female servant. A powerful dystopian allegory, it confronts the ugly realities of racism, homophobia, surveillance, greed, privilege and the self-destructive distortions that occur when we ignore our shared humanity.

A Scatter of Light by Malinda Lo is the new book by the award-winning author of Last Night at the Telegraph Club. After a messy end-of-year party and being banned from her summer in the vineyards with her rich best friends, Aria Tang is sent to stay with her artist grandma in northern California. What she didn’t expect was to suddenly be attracted to a girl for the first time – and especially not one who already has a girlfriend.

The Fat Lady Sings by Jacqueline Roy is a groundbreaking novel exploring the intersection between race, class and mental health in the UK. Set in a psychiatric ward in London, The Fat Lady Sings follows two patients who were unable to confide in their doctors and instead, agree to journal their pasts. Whispered into tape recorders and scrawled ferociously at night, the remarkable stories of their lives are revealed.

If you liked Normal People, but want less dysfunctional communication, Open Water by Caleb Azumah Nelson is the book for you. It’s a gorgeously written debut novel about two Black British artists who fall in and out of love, exploring what it means to love in a body that society often views as anything but romantic. Truly, the beauty of the writing in this one can’t be understated.

Part of the Vintage Earth collection, The Man With the Compound Eyes by Wu Ming-Yi is a translated work of eco-fiction that comes to us from Taiwan. Atile’i is supposed to be sacrificed to the Sea God, but he’s determined to defy destiny and be the first to survive. Instead, he crashes into the shores of Taiwan, bringing with him a trash vortex, and interrupting the life of the woman who finds him in the midst of this catastrophe.

The best memoir we’ve read so far goes to Crying in H Mart by Michelle Zauner. Confronting, heartbreaking and full of love, it’s a book that I [Xuan] will never stop recommending. If you have a complex relationship with your mother, reach for this memoir. You will not regret it. Just make sure there are tissues nearby!

Brother, I’m Dying by Edwidge Danticat is a memoir that I [Marina] read almost five years ago now and am still haunted by. It follows Edwidge’s life as a child who grew up between homes in Haiti and the US and shuttled between parental units. It delivers an absolute gut punch when you get up to the ‘Brother, I’m dying’ portion and shows the inexcusable failures of the US immigration system from so many angles, while also conveying the amount of love Edwidge’s family shared.

An Amplify bestseller, Tell Me Again by Amy Thunig is the must-read memoir of 2022. In this remarkable memoir, Amy narrates her journey through childhood and adolescence, growing up with parents who struggled with addiction and incarceration. She reveals the importance of extended family and community networks when your immediate loved ones are dealing with endemic poverty and intergenerational trauma.

Against Disappearance edited by Leah Jing McIntosh and Adolfo Aranjuez is one of the best essay collections I [Marina] have ever read. With experimental forms and a range of voices and experiences, the essays it contains expand and explode what we know as ‘the archive’ and our place in it. Against Disappearance is one to take your time with, and savour every moment.

Whites by Otegha Uwaghba is a succinct but scathing personal essay that reflects on racism, whiteness and the Black experience, including exploring how racism often comes from the very same people who are trying to present themselves as allies. This is an essential read for people who loved Reni Eddo-Lodge’s Why I’m No Longer Talking to White People About Race.

The Mother Wound by Amani Haydar is a harrowing memoir about Amani’s experience with losing her mother to domestic violence. It’s an unimaginable trauma and event, but Haydar boldly and powerfully examines complex intergenerational trauma, social and familial pressures, and grief compounded by the brutality of the act.

An urgent exploration of how the gendering of emotions came about, and what we can do to change these damaging stereotypes, Hysterical by Pragya Agarwal is the top of our Christmas recommendations this year. Pragya dives deep into history and science to ask whether there is any truth in the notion of innate differences between the male and female experience of emotions. Not only does she dive into the history of the topic, but she also imagines how a future where emotions are ungendered might look.

Our Work is Everywhere by Syan Rose is a huge (as in, it’s basically A4, but pages-wise, slim) illustrated, oral history of queer and trans resistance. The art of the graphic novel uses a vibrant red, yellow and bluish-purple colour palette to explore themes including Black femme mental health, Pacific Islander authorship, fat queer performance art, disability and health care practice, sex worker activism and much more.

The Intersectional Environmentalist by Leah Thomas is a neat little hardback great for gifting season, and above all, a brilliant handbook about how crucial it is to understand intersectionality in environmentalism and the unequal way that Black and Indigenous peoples alongside People of Colour are impacted by the climate crisis!