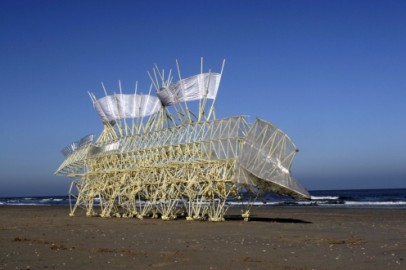 Despite the overwhelming evidence in favour of sustainable energy, it seems those in power (no pun intended) are still reluctant to throw their full support behind it. If only they’d take a trip to Melbourne’s Federation Square this month: we’re sure the sight of the Strandbeest strolling on the sandstone would make them see the light. The creation of Dutch artist Theo Jansen, the Strandbeest is made from materials such as plastic pipes and recycled plastic bottles, and runs (well, walks) entirely on wind power. Although the natural habitat of his creations is the beaches of the Netherlands (Strandbeest means “beach animals” in Dutch), Jansen has generously let two of his inventions make the big trip to Fed Square, where they will frolic – wind permitting – from today until February 26th. Here’s hoping these gentle giants’ peaceful promenading will bring a breath of fresh air to the renewable energy debate.