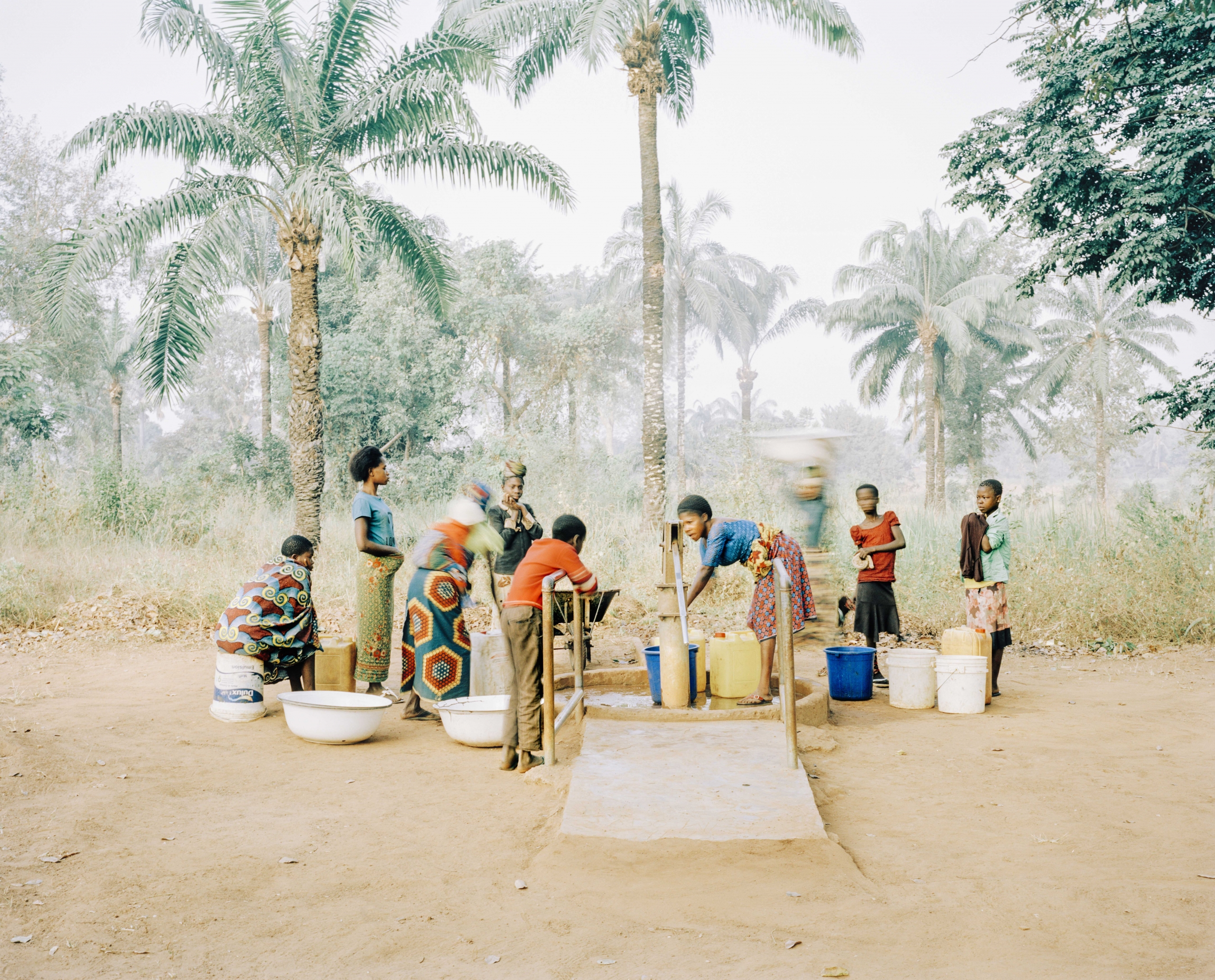 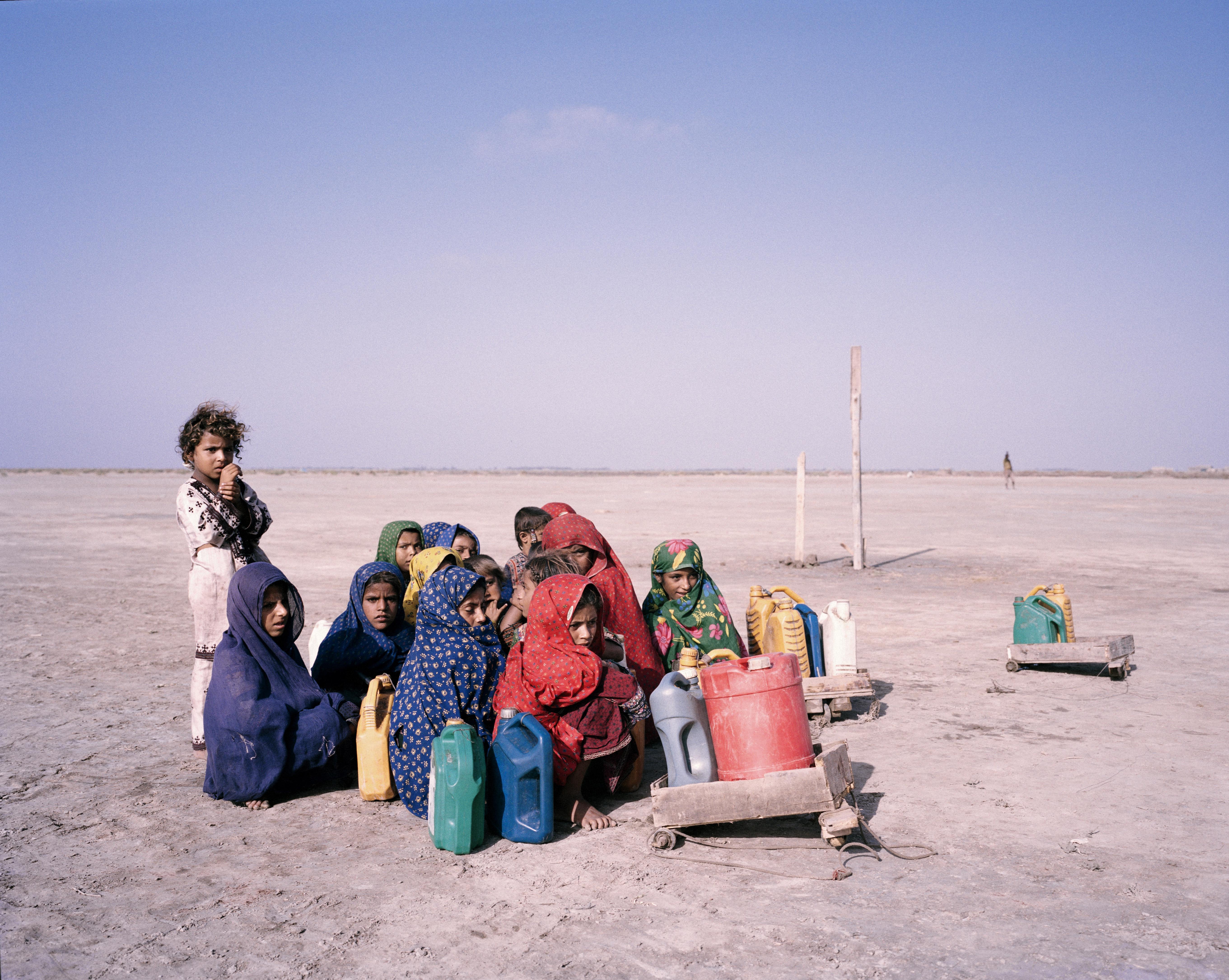 Despite living in drought-prone Australia, it’s hard to imagine experiencing life-threatening water scarcity. How it feels to travel a day for water. To be unable to quench the thirst of your children. Or be forced to give them a drink that could prove fatal.  These scenarios feel far removed from our lives, but new research warns that they’ll start to hit home, with two-thirds of the world’s population predicted to face water shortages as a daily reality by 2025.

Currently, a quarter of the world lives under threat of a lack of water, and over 800 million people can’t access water that’s safe to drink. Since 2011, photographer Mustafah Abdulaziz – as part of the HSBC Water Programme in partnership with Earthwatch, Wateraid and WWF – has travelled the globe chasing water as part of a 15-year mission to capture the stories of the people, rather than the statistics, behind the crisis. As the Water Stories exhibition hits Australia for the first time, we asked Mustafah about his motivation, his process and the most challenging stories he’s had to tell.

What was the inspiration behind the series?

Water Stories is the logical culmination of two thought processes.  I’d been working on a core project, Water, and I realized the work needed to focus on some really core issues of access to water, scarcity and related challenges. Second, I needed to make the work available to viewers at scale and as I created it. I needed to make it relevant now, even as I construct the larger work.

Can you tell us about the process of taking the images?

The process for selecting where to go comes from two elements: the first is how to structure the project itself and allow each layer to grow from the last organically, and secondly, describing the issues at hand in a concise and responsible way. So far the work has focused on the very visible aspects of water, the lack of access and scarcity and how it affects people’s lives. The future of the work lays in the more conceptual and macro scale, where I can begin to address more complex ideas of systems of control, societal interactions and suggestive futures. 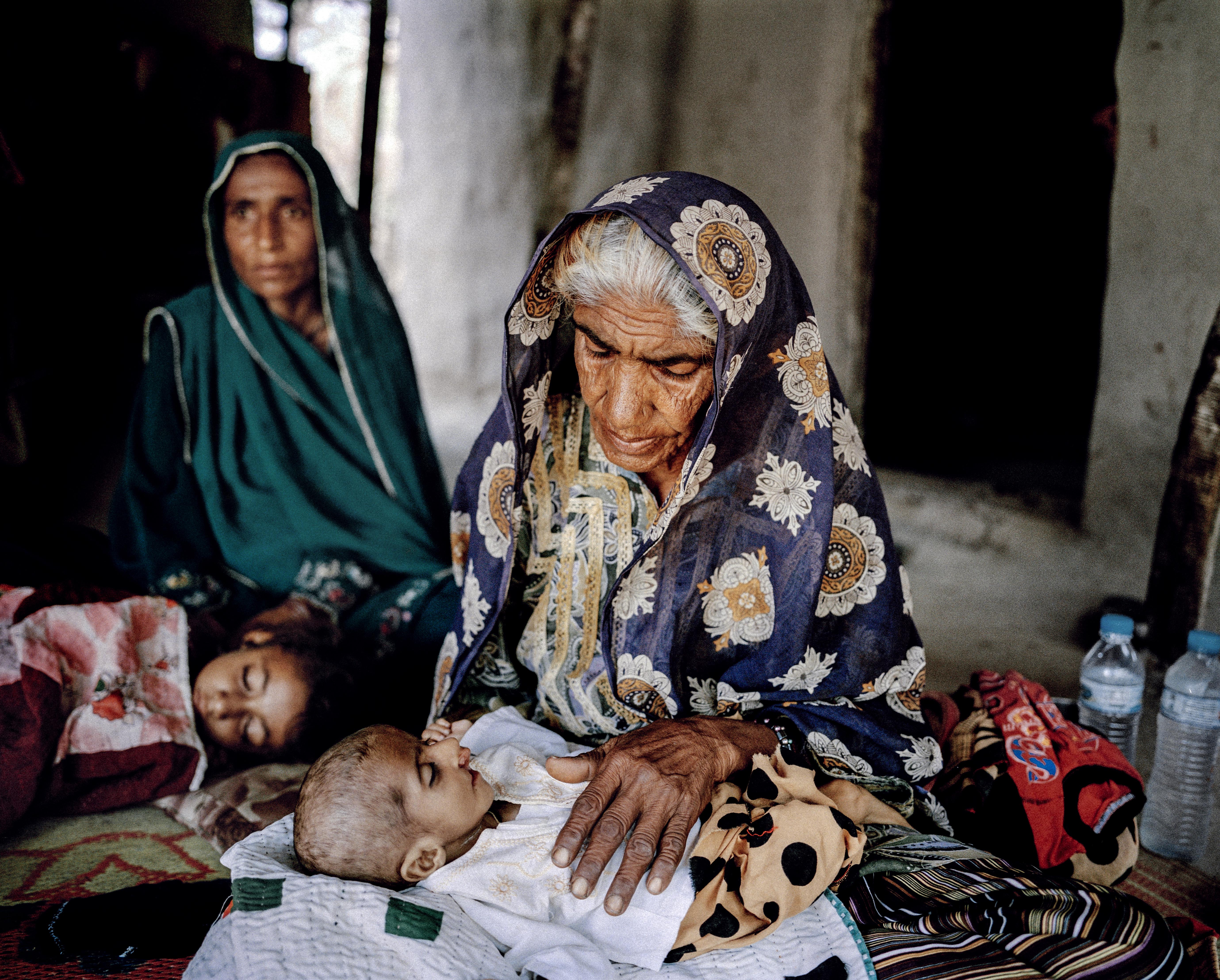 What were the most confronting situations you photographed?

It could be, in the most immediate and disheartening, scenes in southern Pakistan where children were dying from severe diarrhoea. According to the Centers for Disease Control, diarrhoea is the second leading cause of death amongst children under five. This is a staggering statistic and I thought it critical to bring this reality to viewers when they think upon how water or lack of it can be traumatic. The photograph [above] is of a grandmother holding her grandchild, with the mother holding her daughter in the background. It is physically closer than other images, intimate and harkening back to my origins as a photojournalist. It is also the most memorable moment for me in this exhibition, as there was an unspoken energy during my time in this environment. Both the grandmother and mother wanted me there, and this means a lot to me as person: having mutual respect between me and others during moments of personal pain, and taking that seriously is of utmost importance. 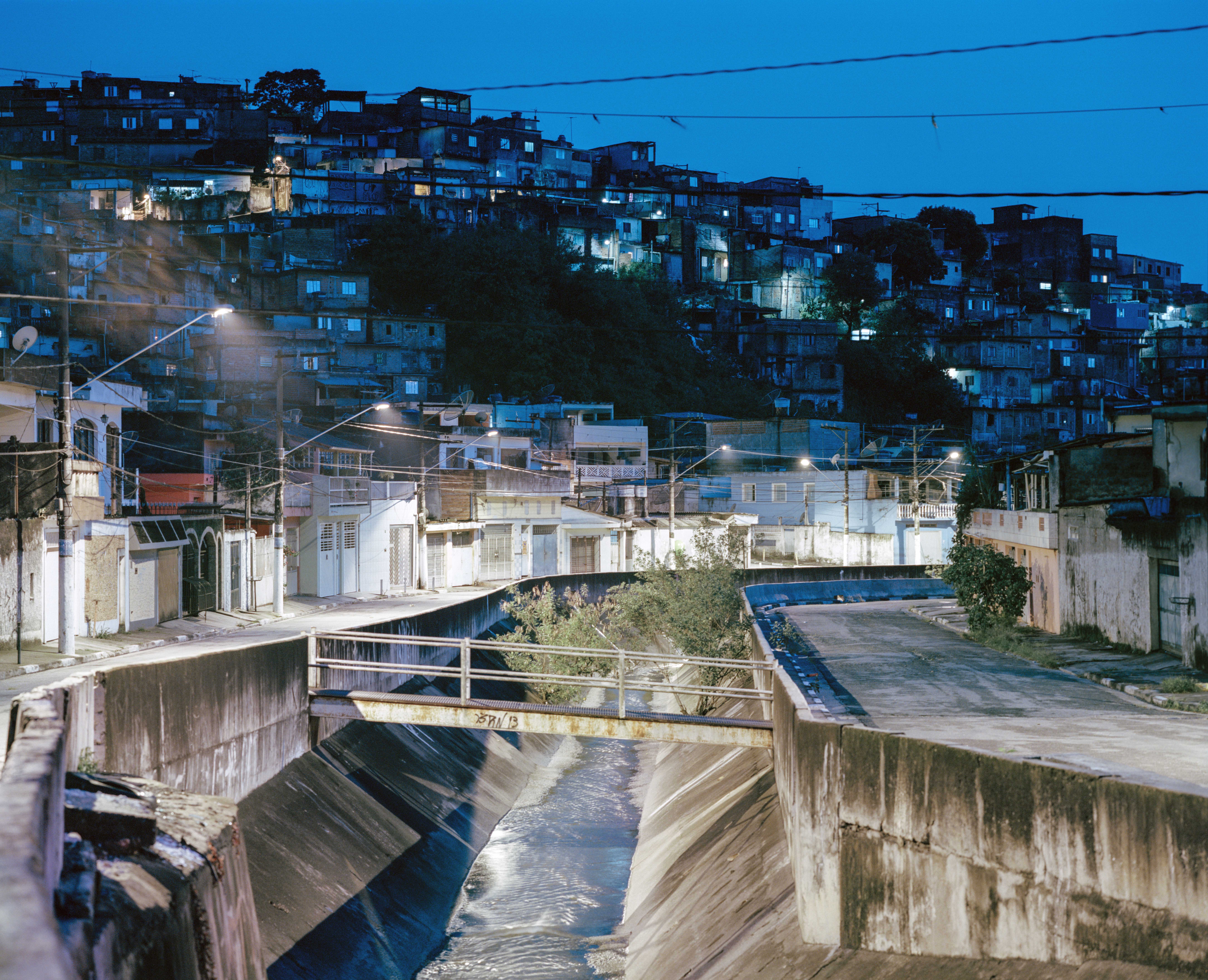 What do you believe we should all be doing to help put an end to the water crisis?

The water crisis is not the only condition of how human beings interact with water. Water is a resource that underpins topics like climate change, agriculture, natural disaster, globalized economy, energy, transportation and even pushes into conceptual areas that address our histories as civilizations. This is the approach I’m attempting to take with this work. To place the water crisis, as it were, in the larger dialogue of how humanity and water are behaving in the 21st Century.

I believe the solution to the problems relating to human development and the health of our world all stem from behavior and choice, and it is these concepts that are important to focus on. What systems have we chosen, and are we using in turn to choose, to interact with our resources? Are they sustainable? Are they going to provide insight and perspective? Will they outline a path forward and provide the ability to adapt to new challenges as our climate becomes more and more thrown out of balance? I ask these questions because they are, in many ways, the questions that will need to be asked if we are to tackle the difficulties ahead. 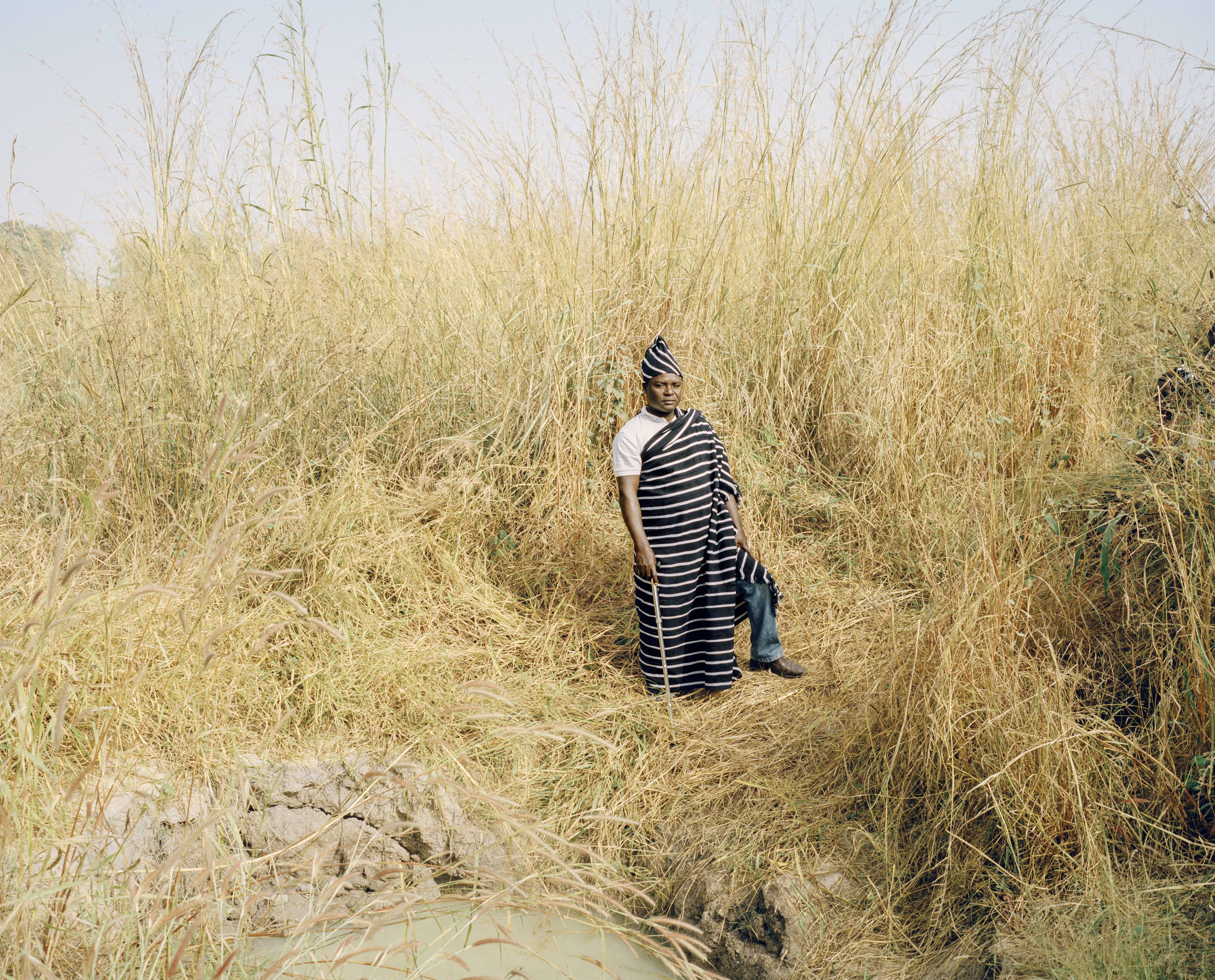 How has your work been received across the world?

I’ve been very fortunate to have received such overwhelming support and positivity in response to the exhibition and the project. It’s good to know that people connect with it, and while my intentions are not entirely tied to the output or the response to my work, it is satisfying for me, as a person, to feel like someone cares about the same things I do.As a photographer, you don’t often get to look at the eyes, faces and body language of your viewer when they experience your work. Seeing people move through the exhibition here in Sydney is a beautiful experience and a tremendous honour.

What message do you hope that people will take away from the exhibition?

There is a specific reason why I photograph the way I do. When people see the simplicity of the work, the concepts and motifs I incorporate, it is intended to intrigue the mind and evoke the imagination. It is here, amongst the sensations of impulse, feeling and wonder that I want this work to exist. This is because the viewer should, in their own capacity as a human being, be met with photography that illuminates their world and reflects it’s realities back towards them. I do not wish to teach a viewer anything, or even to explain a problem to them, although this might be done by default. What I truly wish is for someone – anyone – to look upon their world in a photograph, and perhaps, for a brief moment or an evening, be made to feel the presence of my humanity and these experiences that connect us all, and in this moment transcend themselves in order to see their place in the grand scheme of the natural world. If this can be done, from the work completed from the first five years or the photographs to come in the next ten years, then I will have created a message that is not informational but is, at its core, a message of universality through a shared emotional connection to our planet.

The exhibition runs from 15 August to 5 September on the waterfront at Sydney’s Royal Botanic Garden and will be lit up for evening viewing. The exhibition then moves on to Brisbane’s South Bank from 14 September to 26 September.