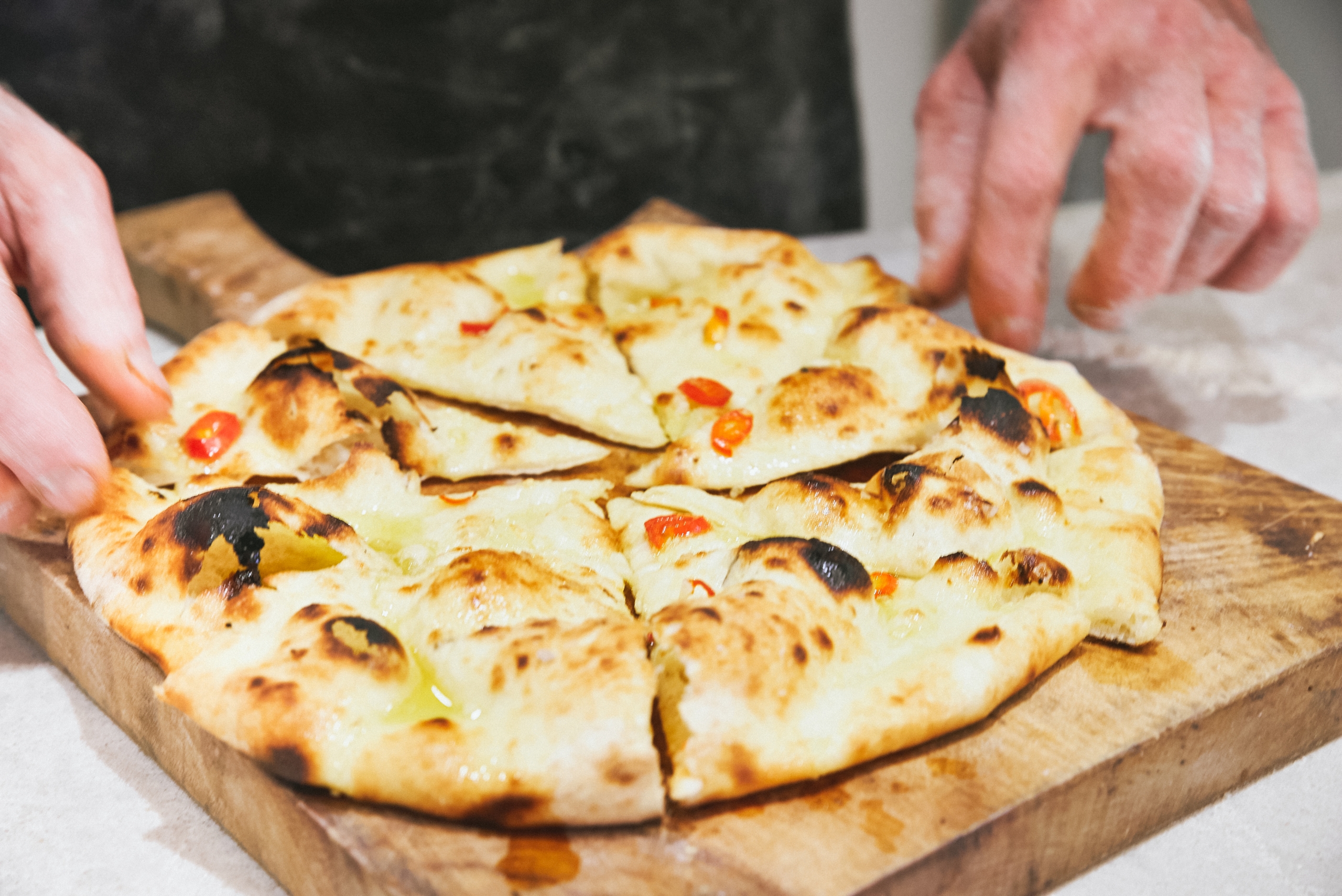 If there’s a better comfort food than pizza, we’re yet to chow it down. It’s why we partnered with our friends at Lighthouse to bring you this simple make-it-yourself pizza dough recipe – so you can whip up your own creation whenever the craving strikes. And let’s face it, when doesn’t it strike?

Dissolve dried yeast in lukewarm water, stir and set aside for 2 minutes or until little bubbles form on the surface – this way you know your yeast is alive.

Measure out the flour, add salt and, if working straight onto a bench space, push ingredients into a pyramid (if you are using a bowl this is not necessary) and make a well at the top.

Pour the olive oil into the well and then slowly pour in some of the yeast/water mixture. Using your hands, fold the flour into it. Do this until all ingredients are mixed.

Knead dough on flat, floured surface until smooth and elastic.

Drizzle the ball of dough with olive oil (this prevents the dough from sticking to the bowl and enriches the dough flavour) and place in a clean bowl.

Cover with a damp tea towel and place somewhere warm for an hour or until dough doubles in size*.

Made with a mixer

In the bowl of a mixer, dissolve the yeast (if you are using fresh yeast, just double the amount required of dried yeast) in lukewarm water.

Put the bowl into the mixer and add the measured flour, salt and then drizzle in the oil. Using the dough-hook attachment, mix the ingredients for 5-7 minutes, watching as a dough ball forms. Use personal judgement as to whether or not another tablespoon of water needs to be added.

After 10 minutes, remove the dough ball, drizzle lightly with olive oil, place in a clean bowl and cover with a damp tea towel. Set aside in a warm place for an hour or until dough doubles in size*.

*time taken for dough to double varies depending on conditions.

Once your dough has risen, divide it in half (or more if you want smaller pizzas) and roll into balls. Place onto a clean tray and leave to rise again for an hour.

For best results, leave the dough balls covered in the fridge over night – this greatly improves the flavour of your dough and also reduces the elasticity, so you can roll it out and get that perfect base and crust.

Alternatively, if you want to make pizza on the same day, you can roll out the dough balls after having let them rise again for a minimum of an hour. However, do note that you will find the dough difficult to roll out due to its elasticity and it will result in a thicker pizza base.

Three ways to shape your base

On a well-floured surface, take one of the dough balls and flatten by hand. With reasonable care, push and pull the dough into a round shape. Spinning the dough around using your fingertips is also a great way to get it to stretch out. Do this until the dough is thin and in the right shape.

Use a rolling pin to roll out the dough to the desired shape and thickness. Note that this method will result in a thinner and flatter pizza base with no crust, as the rolling pin presses out the air bubbles.

This one’s similar to the first option – but after stretching the dough out a little bit, pick it up and spin it in the air. Gravity will take care of the rest. This trick might take some practise and good hand-eye coordination! If your fingers go through the dough, just pinch it back together.

Et voila – you’ve only gone and made a pizza base! Now chuck your fave toppings on it, get it in the oven and bask in the comforting glory of what you’re about to eat – you totally made that!