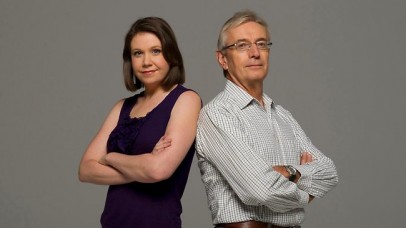 Last Thursday, AYCC chair and leading Aussie environmentalist Anna Rose faced off against former Senator and renowned climate sceptic Nick Minchin on the ABC1 special I Can Change Your Mind About Climate. The documentary (and Q&A panel afterward) heavily divided the public, much like the issue of climate change – and its associated ‘realness’ or ‘urgency’ – continues to. In the lead up to the release of her new book Madlands, we caught up with Anna to pick her brain about dealing with climate change sceptics and new ways forward for environmental action.

How do you feel the show went?

I never expected to go on a journey with a politician who’s spent his career arguing that industries can pollute our air, soil and water without limits. But while we disagreed about many things, Nick and I did find some common ground in our vision for Australia’s future. I was glad that the documentary could end on Nick and I agreeing that Australia should transition away from fossil fuels and towards renewable energy.

Was there anything you learned (particularly from Nick’s point of view) along the journey?

This experience has taught me that those of us who accept the science of climate change have to find even better ways to explain ourselves. Given a proper understanding of the indisputable scientific facts, every person should be able to support responsible action on climate change. There has been a huge campaign against science, and it’s managed to cut through to some sections of the Australian population. If, as a result of this, the understanding of climate change isn’t strong enough, it just means environmentalists will have to find new ways to communicate climate science. We will never know every single thing about every single aspect of our climate system. But this doesn’t mean we can ignore the information that we do have.

Do you feel that Nick changed his view in any way or learned from the experience?

In London, towards the end of the journey, we met conservative British MP Zac Goldsmith. In a conversation with him, Nick accepted that the world has warmed and said (his exact words): “Human emissions of CO2 probably made some contribution to that.” Most people who refuse to accept the science of climate change deny any link between carbon pollution and the world warming – so to me this was a huge step forward.

97 out of 100 climate scientists are now in agreement about this – why do you think the public still has a 50/50 split?

There isn’t really a 50/50 split. There are a small group of people, often funded by fossil fuel magnates, who have spent a lot of money trying to cast doubt on scientists. But despite this, a Newspoll survey last year and an Ipsos survey released last week found that around 90% of Australians believe that climate change is caused either partly or entirely by human activity. That makes Nick’s view an unusual one that doesn’t reflect the opinions of the majority of Australians who support taking responsible action to cut carbon pollution.

Do you have new ideas now about the way forward for climate change advocacy?

I’m about to go on a three month long road tour talking to outer suburban, regional and rural communities about climate change science, impacts and solutions. It’s important to keep doing the grassroots work changing hearts and minds, one person at a time, to build the critical mass of support that we need to bust misconceptions about the price on carbon pollution and build more support for action on climate change.

I have lots of ideas for other campaigns and projects but there’s so much to say to I don’t even know where to start!

Anna’s new book, Madlands: The Journey to Change the Mind of a Climate Sceptic is out now at all good bookstores. Thanks to Melbourne University Press, we’ve got five copies to give away to five lucky readers! Simply head to our Facebook page and join the conversation for your chance to win. {Competition closes 5pm, Monday May 7th and includes Australian postal addresses only}.