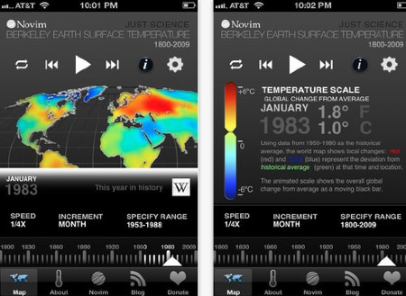 There are some things you can do which are helpful in teaching the public about climate change; then there are some which are not. We’ll start with the good shall we… Utilising the data of the two century-long Berkeley Earth Surface Temperature (BEST) study, developer Nick Orenstein has created an app for iPhones and iPads which literally tracks climate change as it happens. Using colour-coded, moving maps which demonstrate how today’s monthly temperatures compare to historical averages, the free Just Science app is the antidote to disengaging scientific and political rhetoric around the topic, and helps users get involved and interested in what’s happening to the world around them. Also, it’s an app, and people like wasting time on apps – at least this way we’re learning something. (Although it should still be noted, climate change is a lot more complex than just changing temperatures – but hey, Nick Orenstein, we’ll let you get away with it this time). Now, ready for the huge, glowing negative of this whole thing? Someone let Orenstein and friends create their own video explaining the study and the app! It seems they hired their phones’ voicemail robots to narrate the whole thing (and no, not someone nearly as advanced as Siri), and the result is, well, it’s definitely not a win for anyone. Just stick to science, we thinks!