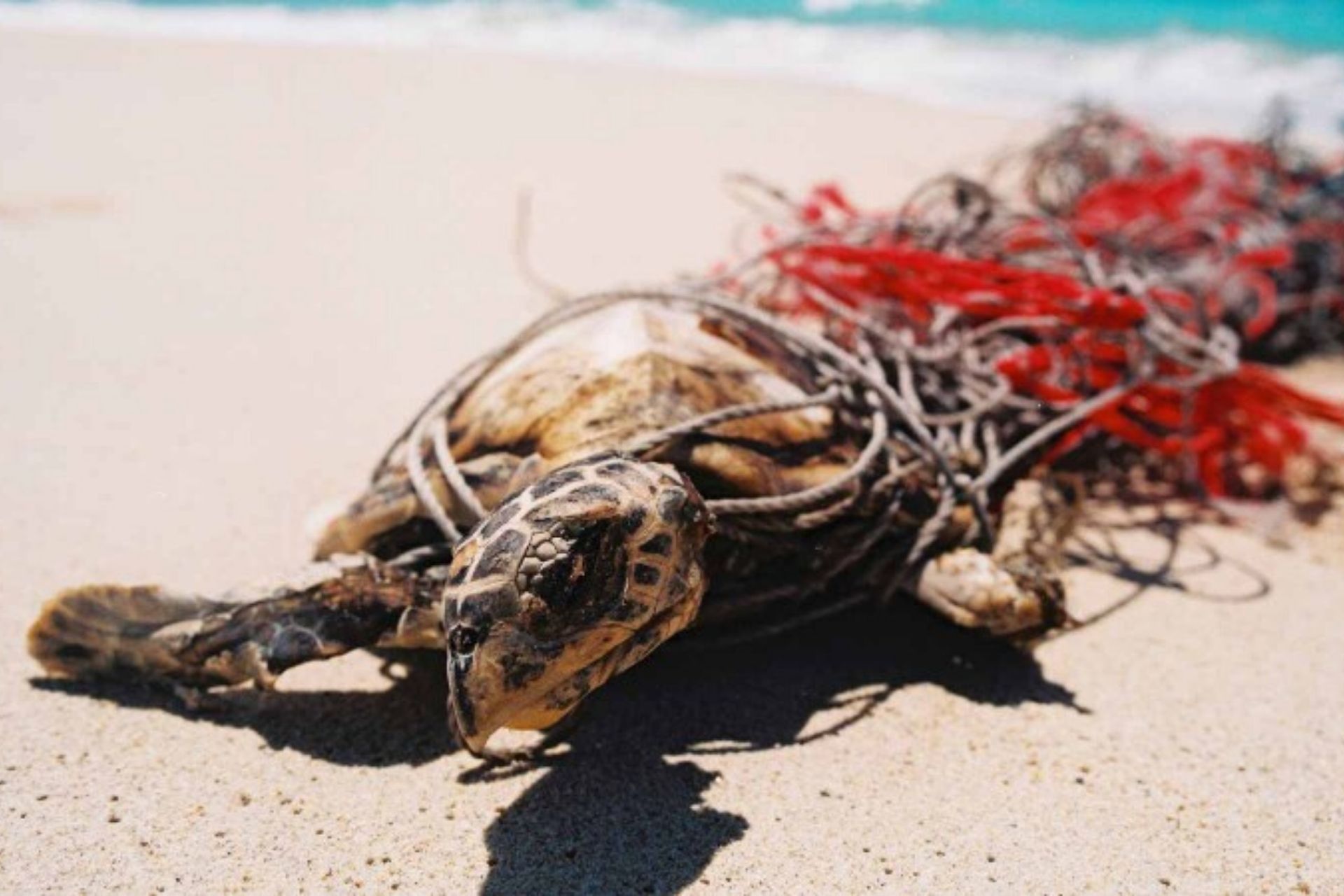 Today is World Oceans Day, the day we celebrate the vast wonder that spans 71% of our blue planet. The annual June 8 event is organised by the UN to champion the health and security of our global marine ecosystem. This year’s theme, ‘Innovation for a Sustainable Ocean’, calls attention to the creative minds who harness new technologies and ancient wisdom to mitigate marine pollution, rehabilitate damaged ecosystems and enhance biodiversity.

This year’s World Oceans Day will look a little different than normal, but it’s special for another reason, too. June 8 marks the launch of a fresh chapter in marine conservation as the UN calls on world leaders to protect 30% of the planet’s oceans by the year 2030.

The initiative, dubbed ‘30×30’, would see at least one-third of our marine environment safeguarded under a network of protected areas (like national parks for the ocean). Currently, as little as 2–5.3% of the world’s oceans fall under marine reserves. That’s despite accounting for 71% of the earth’s surface area, hosting 15% of all flora and fauna species and directly supporting 10% of our global population who rely on fishing for their livelihoods.

The new 30% target is an ambitious increase on the ‘10% by 2020’ goal previously set by the UN. For it to work, it will take top-level support and funding from governments and institutions – but the role of enterprising individuals and the communities who know the oceans best will be just as critical. Hence why this year’s World Oceans Day is honing in on the people and grassroots collectives who take marine management into their own hands.

Instead of the traditional in-person celebration at the United Nations Headquarters in New York, this year will be marked with a free virtual event that kicks off at 10am New York time (or 12am Brisbane time) on Monday.

To celebrate World Oceans Day, we’re spotlighting five incredible innovators and ocean heroes who hail from our own shores and are tackling one of the most pervasive problems: ocean pollution. 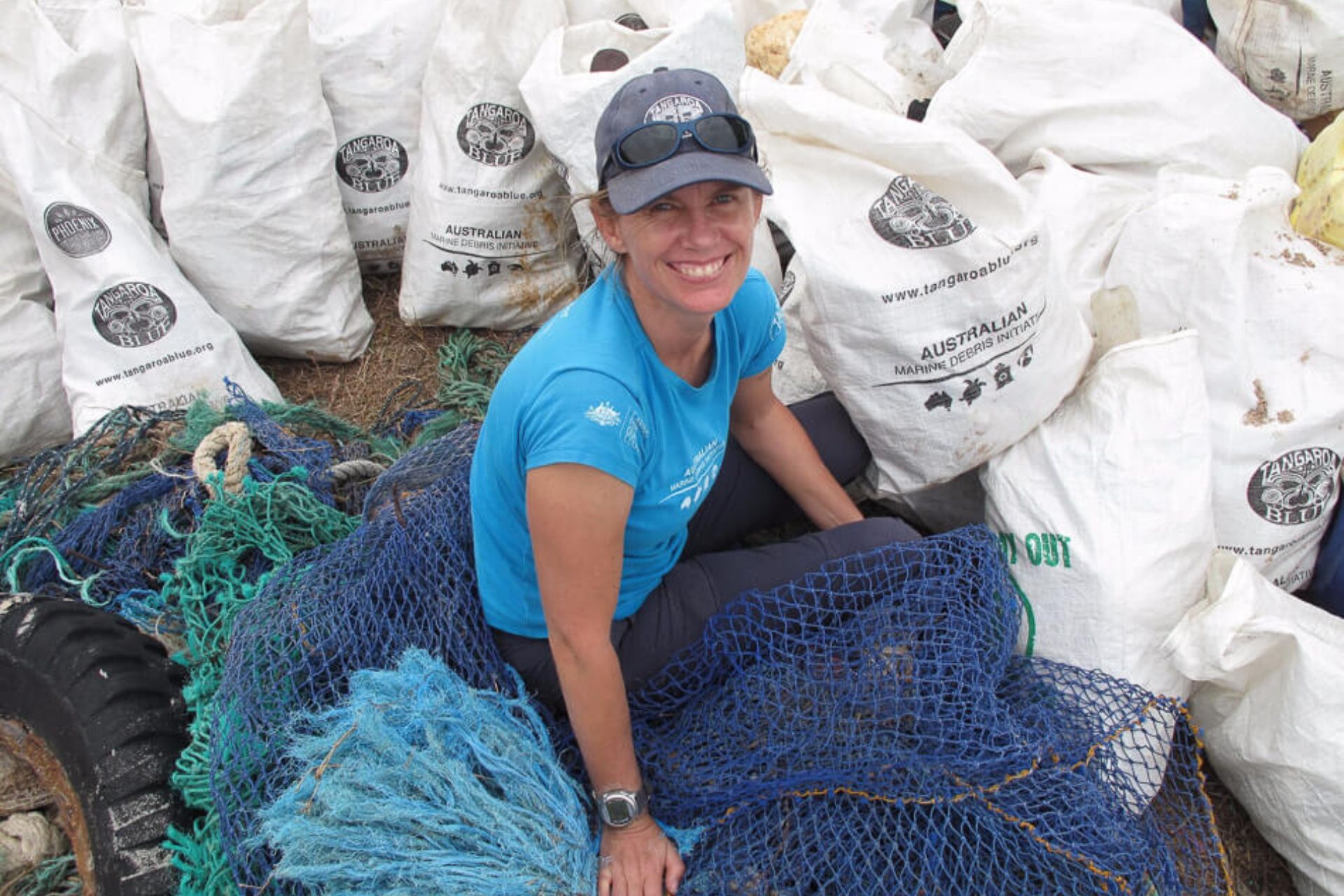 2020 is a sombre milestone for ocean health – it’s the year scientists predicted the number of plastic bags in the sea would surpass the number of fish. Unfathomable to most, it’s something Heidi Taylor – who spent 20 years underwater as a scuba instructor – saw coming almost two decades ago.

Her innovation isn’t a product or service, it’s a mindset. In 2004, Heidi co-founded Tangaroa Blue and the Australian Debris Initiative to try and curb ocean pollution in Australian waters. Powered by the mantra, ‘If all we do is clean-up, that’s all we’ll ever do’, her two-pronged approach to removing and preventing water-borne waste was quite radical at the time.

Australia’s leading organiser of reef and beach clean up events, Tangaroa has so far helped galvanise more than 160,000 volunteers to work across 3,500 clean-up sites, removing an estimated 1,300 tonnes of trash. Heidi’s approach to conservation that involves empowering communities to be stewards of their own environment has earned her many accolades, including being named one of the 18 Most Influential Women in Ocean Conservation by Ocean Geographic. 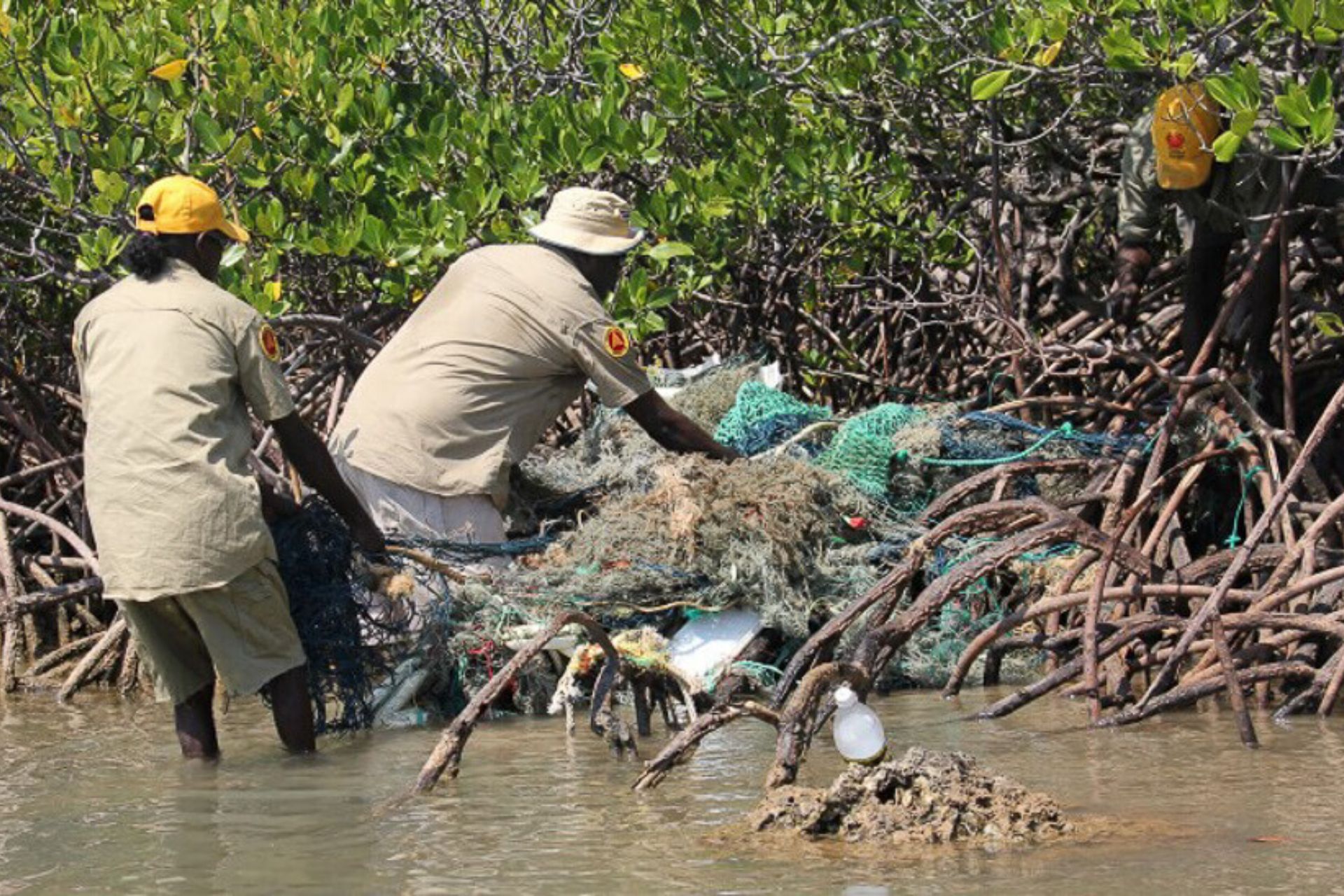 Our global system of oceans is interconnected – and this can be both a blessing and a curse. Fishing nets from Indonesia regularly make their way into Australian waters where they are a deadly hazard to marine life.

A disproportionate number of abandoned nets (or ‘ghost nets’) wash up in far-northern Australia’s Gulf of Carpentaria, also home to six of the world’s seven marine turtle species. A former fisher herself, Riki Gunn knew she could draw on indigenous knowledge and resources in the Top End to try and remedy the issue.

A joint project with the Saltwater People – a collective name for Indigenous Australians who live near and obtain their livelihood from the oceans – GhostNets Australia has helped rescue more than 300 turtles from fishing nets and removed 13,000 more nets from the water.

The innovation lies in Riki and the Saltwater People’s collective approach: over the years, they’ve allied with fishermen and authorities in Indonesia to prevent nets being discarded, while back home, they’ve developed projects to transform old nets into artworks, improving public awareness around the issue. 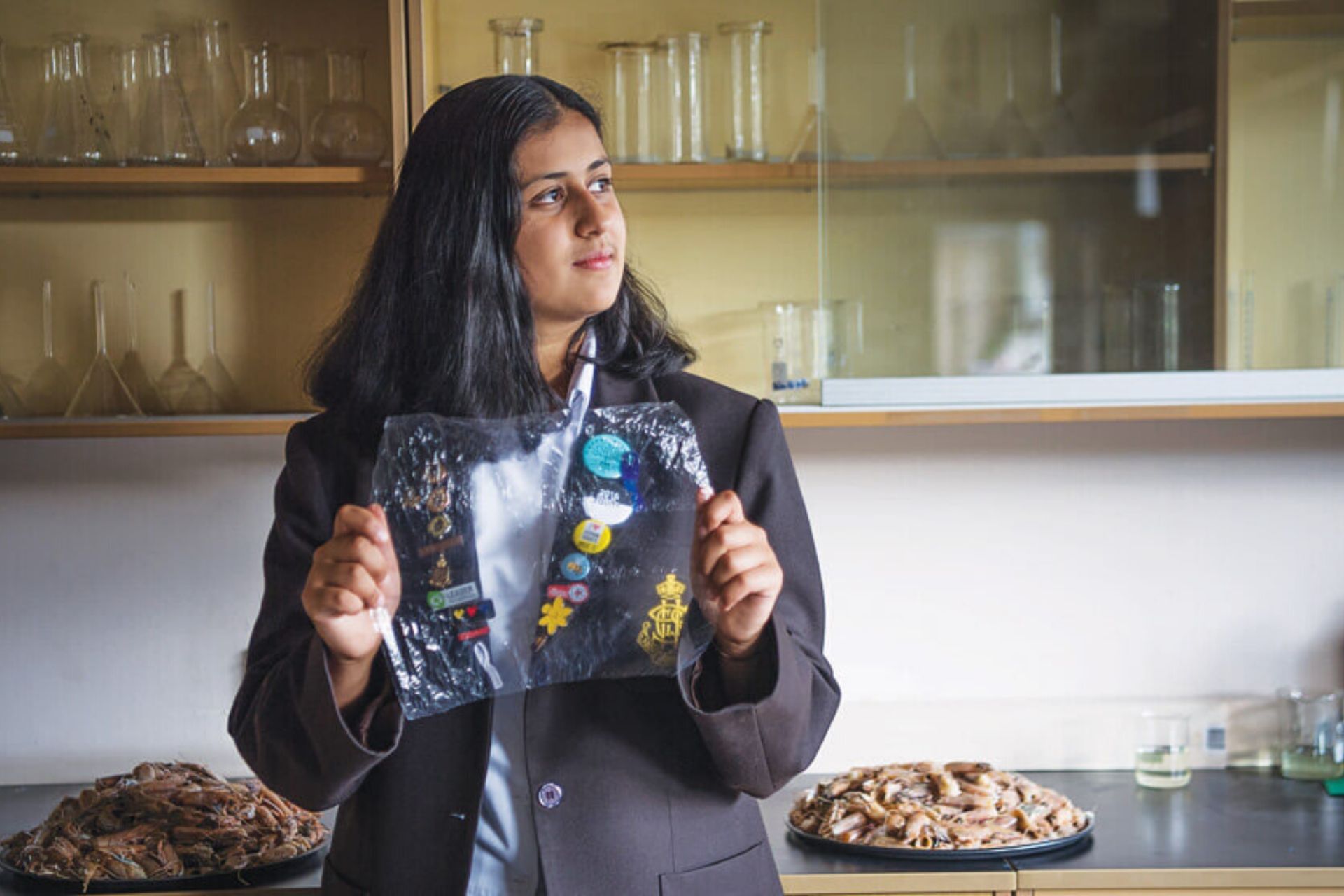 Sydney teenager Angelina Arora made headlines in 2018 when her school science project turned into a ground-breaking innovation in biodegradable plastic. Last year, at the tender age of 17, she was named Australian Geographic’s Young Conservationist of the Year.

Stamping out the use of harmful single-use plastics is essential for long-term ocean health. The non-toxic, fully biodegradable plastic alternative that Angelina developed is one of the most promising solutions the world has seen yet. Made from a combination of discarded prawn shells and protein from spider’s webs, it breaks down naturally in as little as 33 days.

Angelina continues to develop her plastic for everyday use and medical applications – and in her spare time, she’s started working on a new project, this time setting her sights on how algae can play a role in restoring marine habitats after an oil spill.

One of the youngest people to ever give a TED talk, Angelina is a spokesperson for young women in STEM and one of Australia’s brightest minds when it comes to ocean innovation. 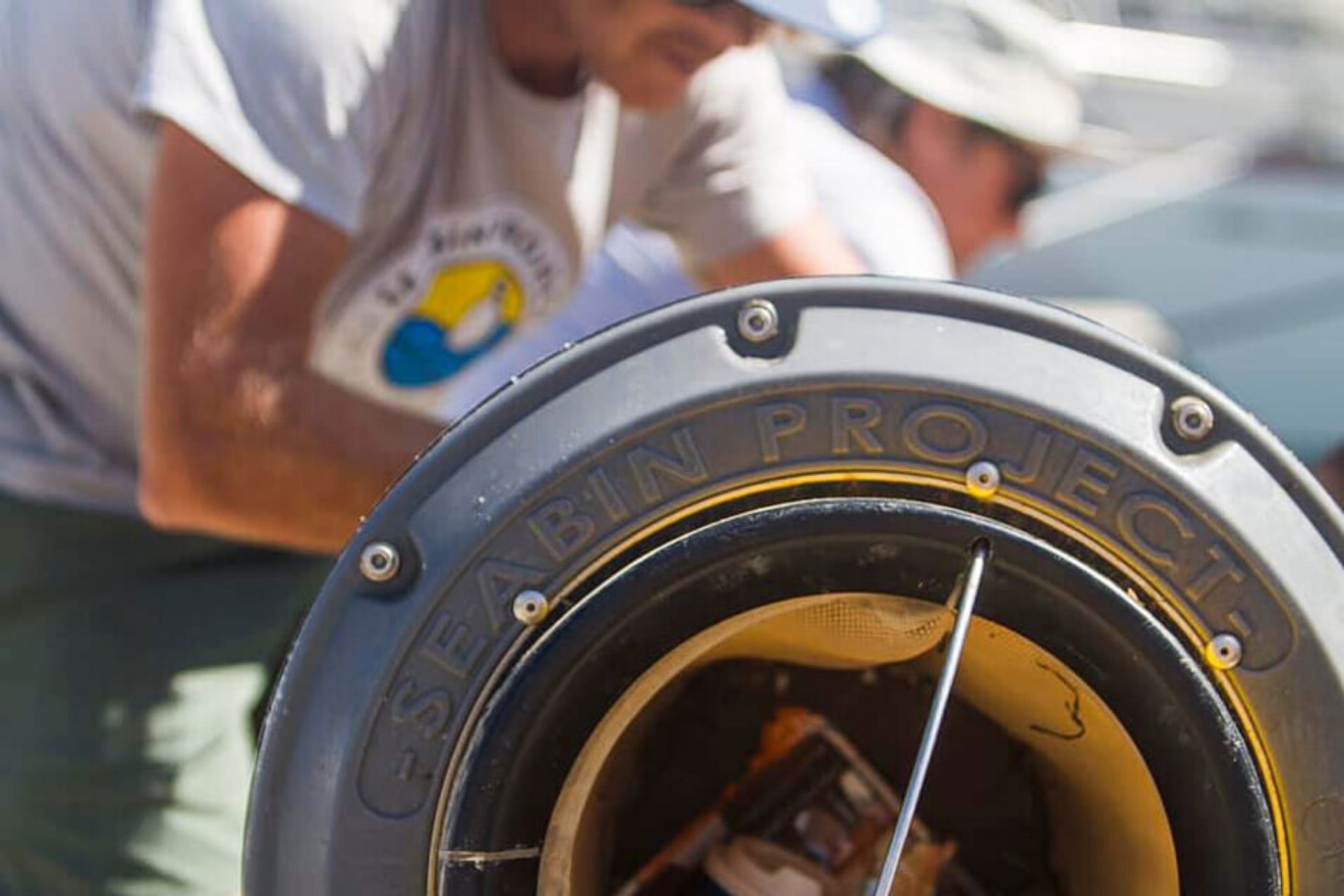 Debris that washes up on our coastline is one thing, but the vast proportion of the 10 to 20 million tonnes of waste deposited into oceans every year remains at sea.

Inspired to eliminate the notorious ‘Great Pacific garbage patch’ and other trash vortexes, Andrew Turton and Pete Ceglinski invented a piece of technology that’s become an invaluable part of our arsenal in the fight against ocean waste.

The Seabin works like a vacuum cleaner, filtering water and trapping floating plastic as it moves with the tide. Each unit captures an average 1.4 tonnes of debris annually, including troublesome microplastics as small as 2mm.

As you read this, there are more than 860 Seabins roving offshore from 50 different countries, extracting 3,600kg of waste from our ocean each and every day. Not a bad effort for two boat builders who invested their life savings and used YouTube videos to build their prototype. 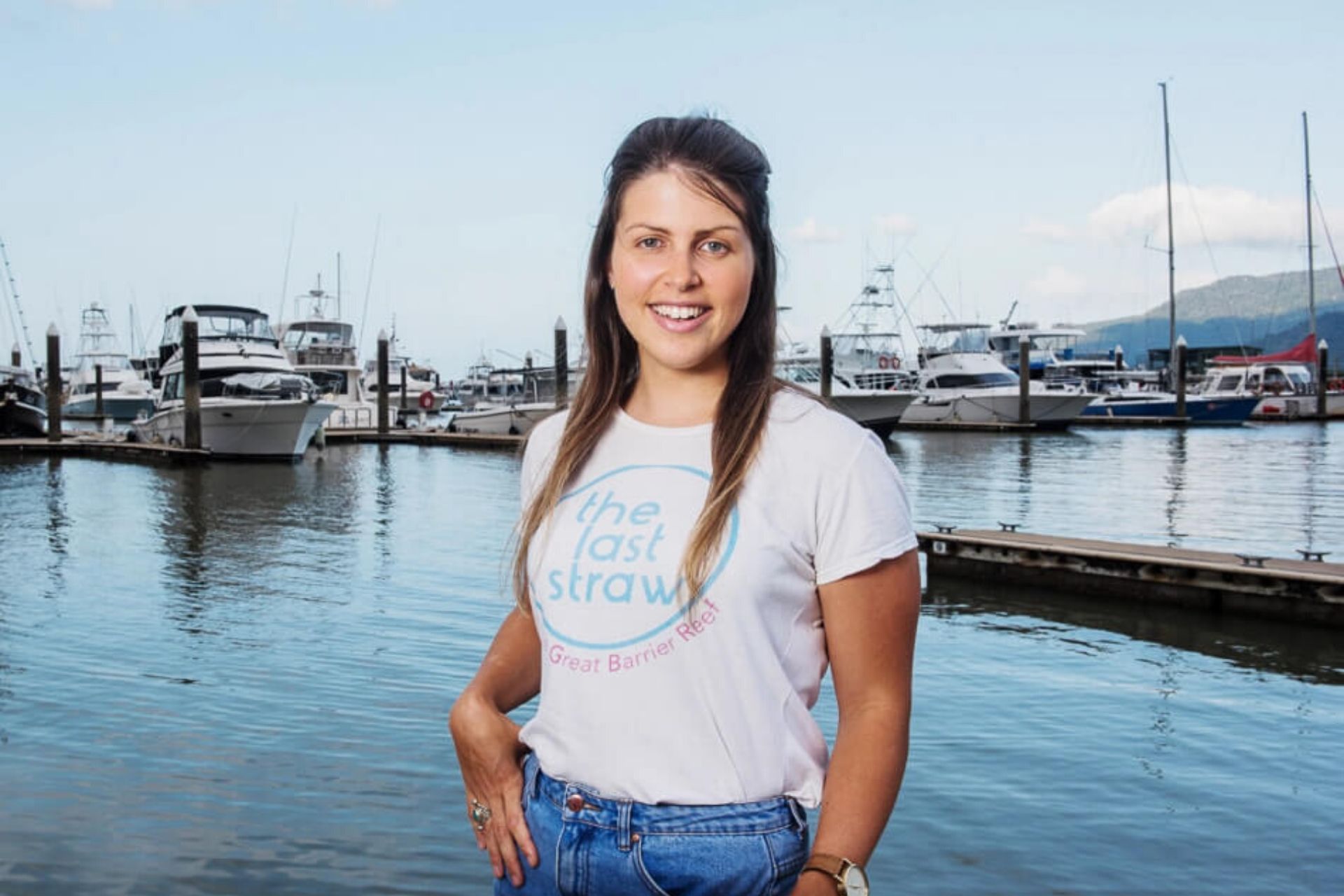 The battle for ocean health often centres on the fight to protect our greatest marine asset, the Great Barrier Reef. Nicole Nash’s innovative approach to tackling plastic waste on the reef may look like common sense on the surface, but proves that it’s often the simplest changes in mindset that can have the greatest impact.

A marine biologist by trade, Nicole worked closely with Tangaroa Blue in North Queensland before launching her own one-woman campaign. Still a passion project at heart, The Last Straw on the Great Barrier Reef has evolved into a regional movement, animating business owners and changing attitudes towards the humble plastic straw forever.

Under Nicole’s leadership, more than 350 cafes, tourist companies and other businesses – stretching from Cape York to Bundaberg – have jumped on board to say no to one of the most harmful ocean pollutants. Their efforts have helped keep close to an estimated 4.5 million straws out of circulation.

At the same time, Nicole kick-started a BYO straw movement that has swept the nation, spurring on other innovators including Adelaide-based Marion Vigot to invent biodegradable drinking straws.