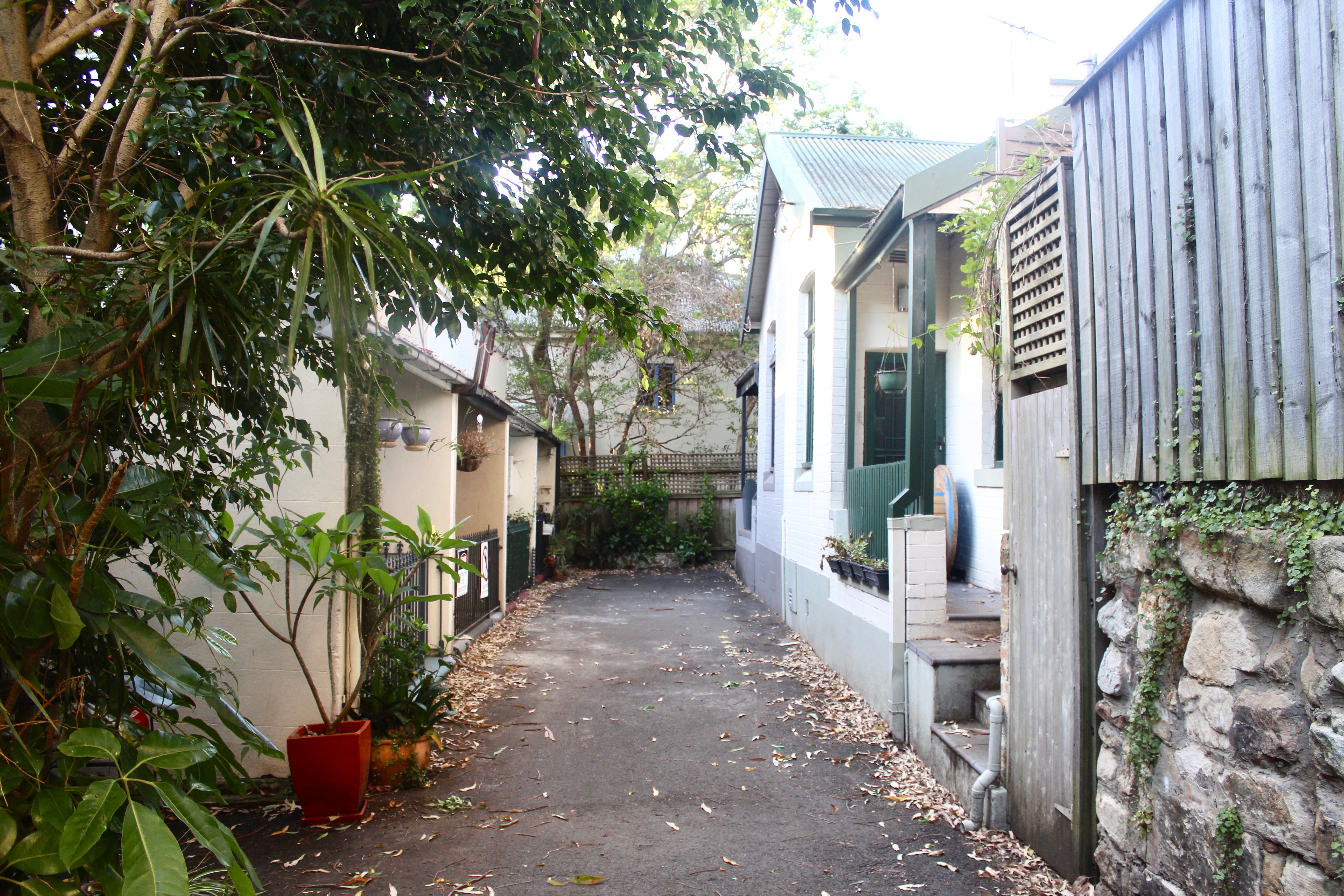 Back in issue 31 of Peppermint, assignmint #18 called on people to make small changes with big impact. For writer Freya Latona, this was the inspiration to create communal composting in her Sydney laneway. Here, she talks us through the ways it’s helped build community and relationships in the space.

Bakers Lane in Sydney’s inner west, a stone’s throw from Sydney University, has always had a huge sense of community. No doubt this is due to the close proximity of our tiny homes. There’s six heritage-listed workers’ cottages in our no-through laneway, all built in the 1800s, making them some of Sydney’s oldest.

At some point during the day there’s normally some kind of action happening in the lane. We bring all the dogs out and let them run wild up and down the no-car street while we chat about this and that and introduce number three’s toddler to the lick of all sizes of canines (to his squealing delight); we had his naming ceremony in the street earlier this year; and we have annual Christmas parties around big tables, where everyone brings a plate. If my fella and I ever get married, I can only imagine it here, in our beloved laneway, the street becoming an aisle for a day. If the Neighbours’ theme song ‘that’s when good neighbours become good friends’ applied anywhere outside of Ramsay Street, it’d be here in Bakers Lane.

It always made sense to have a shared compost here, as us residents already share so much of our day-to-day lives by virtue of being in a tiny laneway and in cottages where the soundproofing isn’t up to modern standards. We already had a communal general waste bin system too, not bothering with using the corresponding bin for each house number. We take it in turns to wheel everyone’s bins out for collection and bring them in the next morning.

Inspired by Peppermint’s ‘Small Steps Challenge’ Assignmint, my partner and I bit the bullet and invested in a communal compost. Now, instead of putting our food scraps in the waste bin, the residents of Bakers Lane turn them into fertiliser for our plants in pots that line the street, and for the small vegetable boxes in our courtyards. Because there’s quite a few of us using it, we create a lot of rich soil. The positive practical and environmental impact of the compost is obvious; what took us all by surprise is the fact that it has enhanced our community as well.

The positive practical and environmental impact of the compost is obvious; what took us all by surprise is the fact that it has enhanced our community as well

We strike up conversations around the bin while we empty our scraps at all times of the day. We chat meals and recipes, giving and getting advice on how best to cook an omelette or bake a tricky dessert; teach the toddler about the environment as he sees his dinner scraps become earth; and compare notes on how our basil is going in its battle against those treacherous herb-eating pests. Some summer nights we end up standing around the bin (it doesn’t smell at all when the lid’s on), wine glasses in hands, sharing stories from our lives rather than going back home to watch Netflix. With all this compost, we’ve got big plans for communal vegetable and herb gardens too.

So often neighbours meet and converse over grievances, and this is their only interaction. They knock on each other’s doors (or worse, leave passive-aggressive notes in the letterbox) with noise complaints and worries about junk stored on front porches. Having a communal compost gives a reason to relate over something entirely different. Chatting about food and the environment is something we all have in common, despite our backgrounds and political beliefs.

There are so many streets that could share a compost bin around Australia. Even if it’s a bin between two like-minded neighbours, or one in a block of flats. If we have room for large recycling and general waste bins, we have space for a compost with a much smaller footprint. The beauty of sharing is that it creates so much more fertiliser for our soil, and an excuse to get to know those who live beside us a little better.