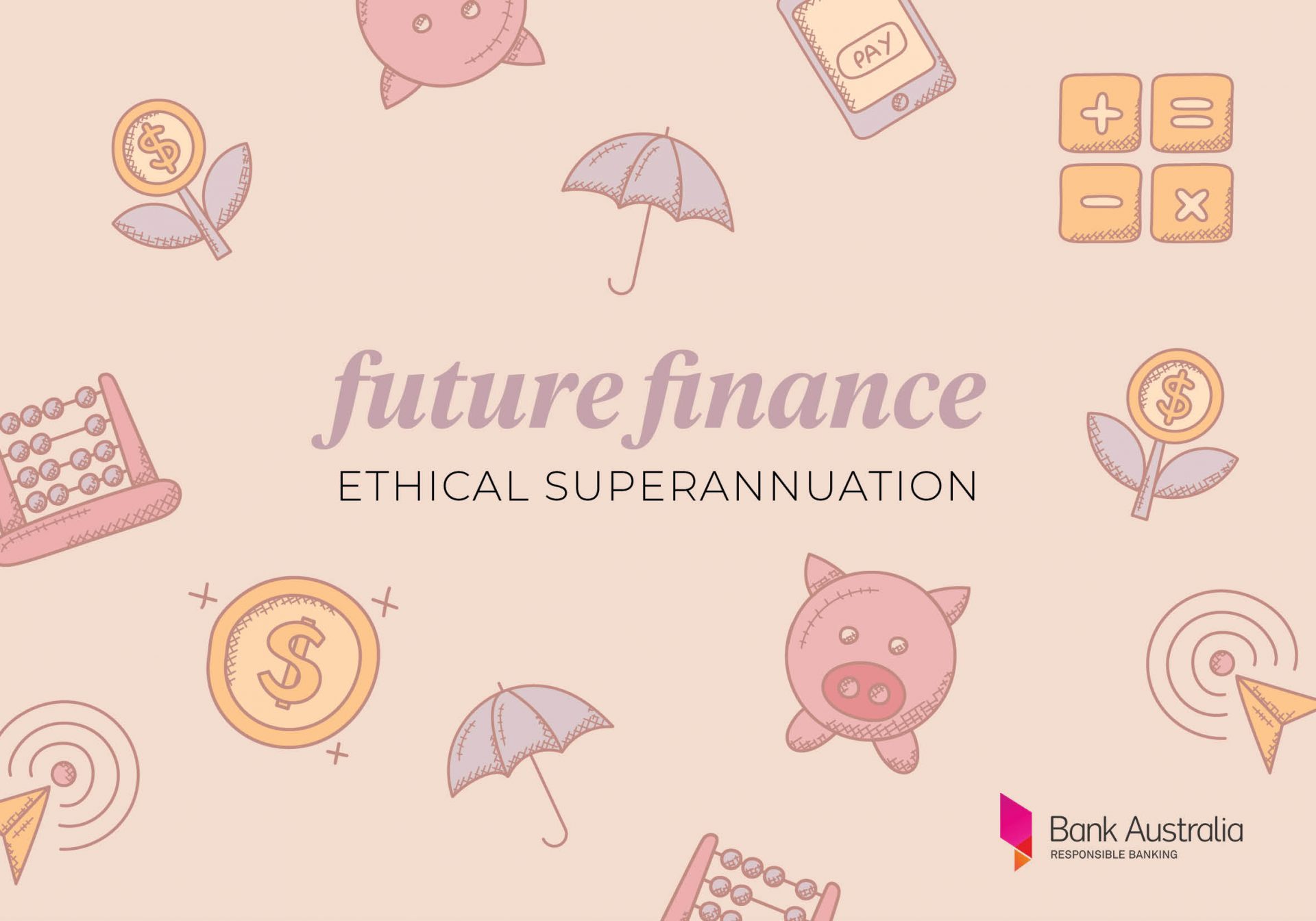 When it comes to living a more ethical and sustainable life, sometimes you’ve gotta put your money where your mouth is – literally. But talk is cheap and finance fickle, so in this four-part online series on ethical money, created in collaboration with our friends at Bank Australia, we’ve balanced the books so you can live a more balanced life and use your money as a force for good. First up, ethical superannuation.

$2.9 trillion – that’s how much Australians collectively have in superannuation assets. As the stewards of almost double the value of the country’s GDP, we hold incredible power in our hands – a super power, if you will.

As we’re sure your financial advisor, school guidance counsellor and probably your grandpa have all told you, selecting your super fund is one of the most important financial decisions you will ever make. But with more than 500 funds on the market all competing for your nest egg, it can be very difficult to know who to trust, or what criteria you should be using to compare.

If mere mention of the ‘S’ word is enough to make your eyes glaze over, don’t worry, you’re not alone.

“There are a range of reasons why people don’t engage with their super,” explains Christina Hobbs, co-founder and CEO of Verve Super. “For younger people, super is something that often doesn’t seem relevant, whereas for many adults, it can seem too complex. People often worry that they don’t have enough, and so they don’t want to know. Most of us were simply never taught to make investment decisions, which makes it feel daunting.”

Superannuation in a nutshell

Personal superannuation is the money we set aside during our working lives to fund our retirement, either through compulsory employer contributions, voluntary contributions, or both. The average Australian enjoys two decades of retirement, so the goal is to accumulate enough to live off for 20 years.

Co-founder of Future Super, a superannuation fund focused on positive impact, Kirstin Hunter says that Australia’s super scheme is unique in its flexibility.

“Superannuation is a long-term investment – it’s money that you are putting aside today to retire with in the future. In Australia, unlike other countries with similar schemes, we have the privilege to be able to choose which super fund we want to manage our money during this time,” she says.

Unlike stashing cash under the mattress or even putting money into a high-interest bank account, superannuation funds can yield a higher rate of return (ROR). They’re bound by special conditions, such as the inability to withdraw your super before you reach retirement age – with some exceptions.

Many funds have sacrificed common values in the quest to maximise ROR, investing their customers’ money into industries that yield attractive returns but are inherently detrimental to people and the planet.

Like any investment, your super doesn’t just sit under lock and key until you’re ready to claim it. It’s the job of your super fund to ensure your balance grows, and one of the ways that’s done is by investing your money into a portfolio of different companies and enterprises over its lifecycle.

Unfortunately, many funds have sacrificed common values in the quest to maximise ROR, investing their customers’ money into industries that yield attractive returns but are inherently detrimental to people and the planet. This includes logging, tobacco and coal, to name a few.

“Over the 40-something years of your career, that money can be used to prop up failing industries like the fossil fuel industry, or it can be used to build the industries of the future, depending on your choice of super fund,” says Kirstin. “Many people don’t realise that just 7.7% of the money that Australians have in superannuation could fund Australia’s transition to 100% renewable energy. That’s why it’s key to choose a fund that reflects your values.”

However, because of the way most super funds are structured, we may never learn whose hands our hard-earned money has passed through or the kinds of industries we’ve been (in)directly investing in. 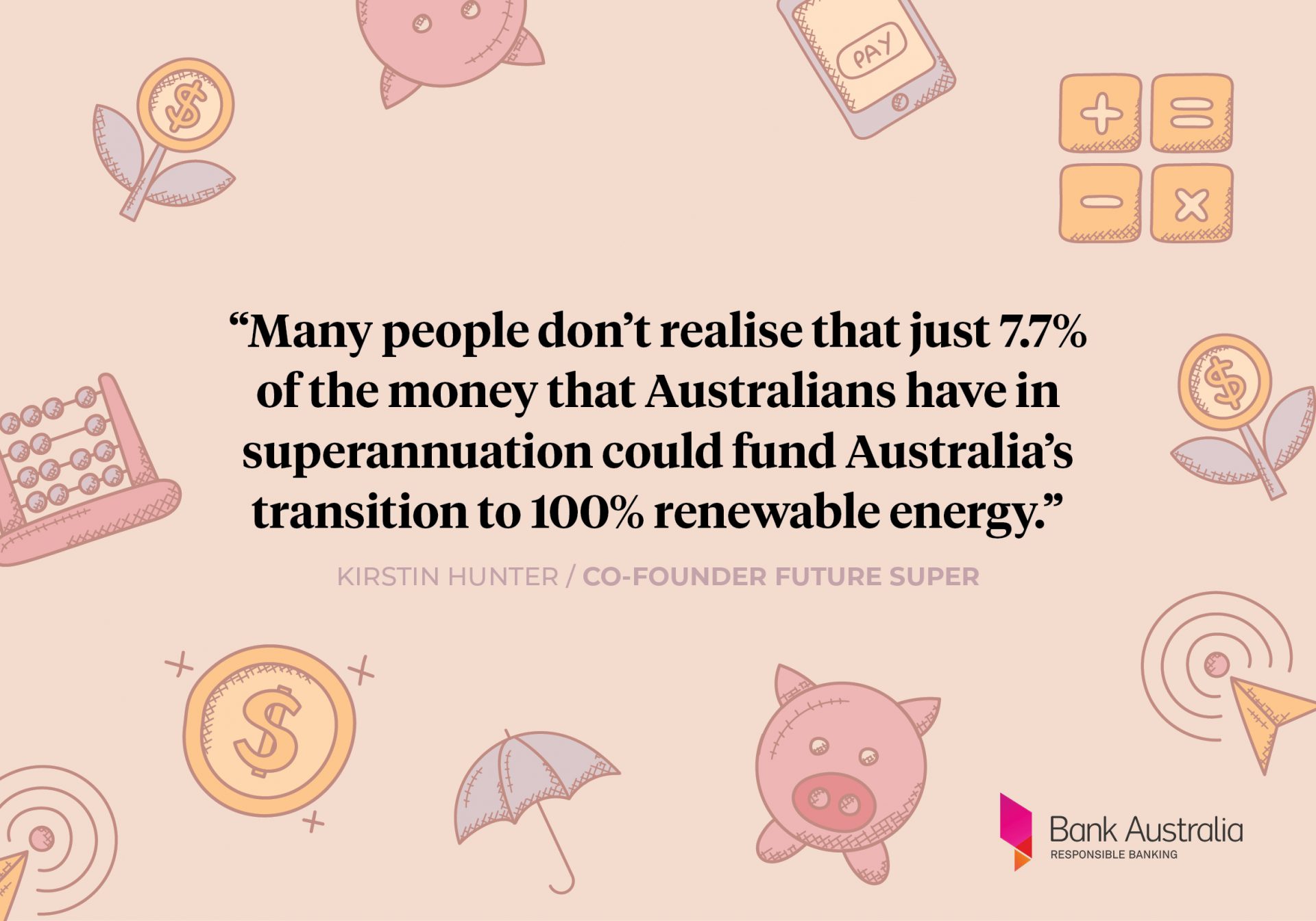 The rise of ethical super funds

Now all that is changing. More of us are saying no to personal financial gain at the expense of our morals and principles. “Australians are demanding more,” Christina confirms. “According to the Responsible Investment Association of Australia, 9 in 10 of us want our superannuation invested ethically and responsibly.”

This has given rise to a new crop of super funds guided by value-driven investment strategies. Negative screening (excluding companies that don’t meet certain standards, be they environmental or in terms of workers’ rights) and positive screening (investing in companies that explicitly contribute to environmental protection and upholding social values) have become more commonplace. Aside from Verve Super and Future Super, in Australia, other super companies such as Australian Ethical Super also prioritise divestment and positive impact.

But that doesn’t mean all ‘ethical’ super funds are created equal. There’s still limited regulation around the use of terminology, so Christina urges people to tread carefully.

“In the same way that there are different views between people on what is and isn’t ethical, super funds also have widely different views on this,” she explains. “There are examples right now of funds using terms like ‘responsible’, ‘ethical’ or ‘eco’ for their products and still investing in industries such as fossil fuels, weapons, and companies that test cosmetic products on animals.”

We’re seeing ethical investment return on par, and at times exceed, investment in environmentally damaging industries… here’s no longer any argument that you have to trade-off between the planet and profit.

By contrast, ethical superannuation funds hand-pick investment partners according to strict standards and typically make a full list available to download from their website. Renewable energy, access to healthcare, public transport and waste management are all prioritised, while gambling, tobacco and fossil fuels are ruled out.

Investing your super ethically doesn’t mean having to sacrifice on returns either. “Recent research by the Responsible Investment Association of Australia has confirmed that truly ethical funds outperform the market over the short, medium and long term,” Christina adds.

Kirstin agrees saying that the argument against the financial viability of ethically focused investing no longer stacks up – and that climate change isn’t the sole motivator for those choosing to switch.

“There are commonly held misconceptions that the only returns from ethical investment are environmental,” Kirstin says. “We’re seeing ethical investment return on par, and at times exceed, investment in environmentally damaging industries – this has been even more pronounced during the COVID-19-related market turbulence, with ethical funds outperforming unethical funds across the board in the first half of 2020. There’s no longer any argument that you have to trade-off between the planet and profit.”

“The reason we (and other ethical funds) have done so well is because of the ethics behind our investment decisions – we don’t invest in fossil fuels, the high-polluting airline industry, alcohol, tobacco and gambling – all of which have been hit hard by the triple crisis,” adds Kirstin. “While other funds have fluctuated, we’re one of the few funds who have delivered positive returns for the 12 months to the end of the financial year.”

Women standing up for their super

According to ABS statistics, Australian women retire with a superannuation balance that’s almost half that of men.

Women on average are retiring with 37% less super than men, and elderly single women are the fastest growing cohort of homeless Australians.

“For women, it’s particularly important to think about how to manage super because unfortunately, we face a lot more challenges,” Christina says. “Women on average are retiring with 37% less super than men, and elderly single women are the fastest growing cohort of homeless Australians. As a nation, we should be appalled by this. But until we get some serious policy change, women will need to work harder at building their super to retire comfortably.”

Is it too late to switch to an ethical super fund?

For the most part, the fund we entrust with our superannuation is entirely our decision. And thankfully, we have a lot of flexibility. No matter what stage of life you’re at, it’s never too late to swap to a more ethical provider and it’s a pretty simple process these days. Christina has some practical advice for anyone who is considering a change.

“It only takes two minutes to switch super funds,” she explains. “The hard part is deciding which super fund you want to join, so it’s worth spending some time doing your homework. Start by thinking about your own ethics, and which industries you do and don’t want to invest in. Then have a look at a few different superannuation funds and decide which ones meet your values.”

It’s your money being invested to benefit you in your retirement – you can decide what factors are important to you.

Market Forces, a climate activist group, has done a lot of the work here, aggregating information about banks, superannuation funds and other financial service providers and how consumers’ money is being used. If you’re in doubt though, the best thing to do, according to Kirstin, is to go directly to the super fund.

“Many super funds only disclose their top 10 or 20 investments, and many more disclose none at all,” she says. “Everyone should be able to find out what their super fund is doing with their hard-earned cash, so if you do want to find out, we recommend writing to your funds to openly ask,” Kristin adds.

“At the end of the day, it’s your money being invested to benefit you in your retirement – you can decide what factors are important to you.”

Note: This article is for informational purposes only and does not constitute financial advice. Please do your own research and seek professional advice where required.

Our Future Finance Series has been created in partnership with our friends at Bank Australia. Want to align your money with your values? Head to their website to find out how you can use your money for good.