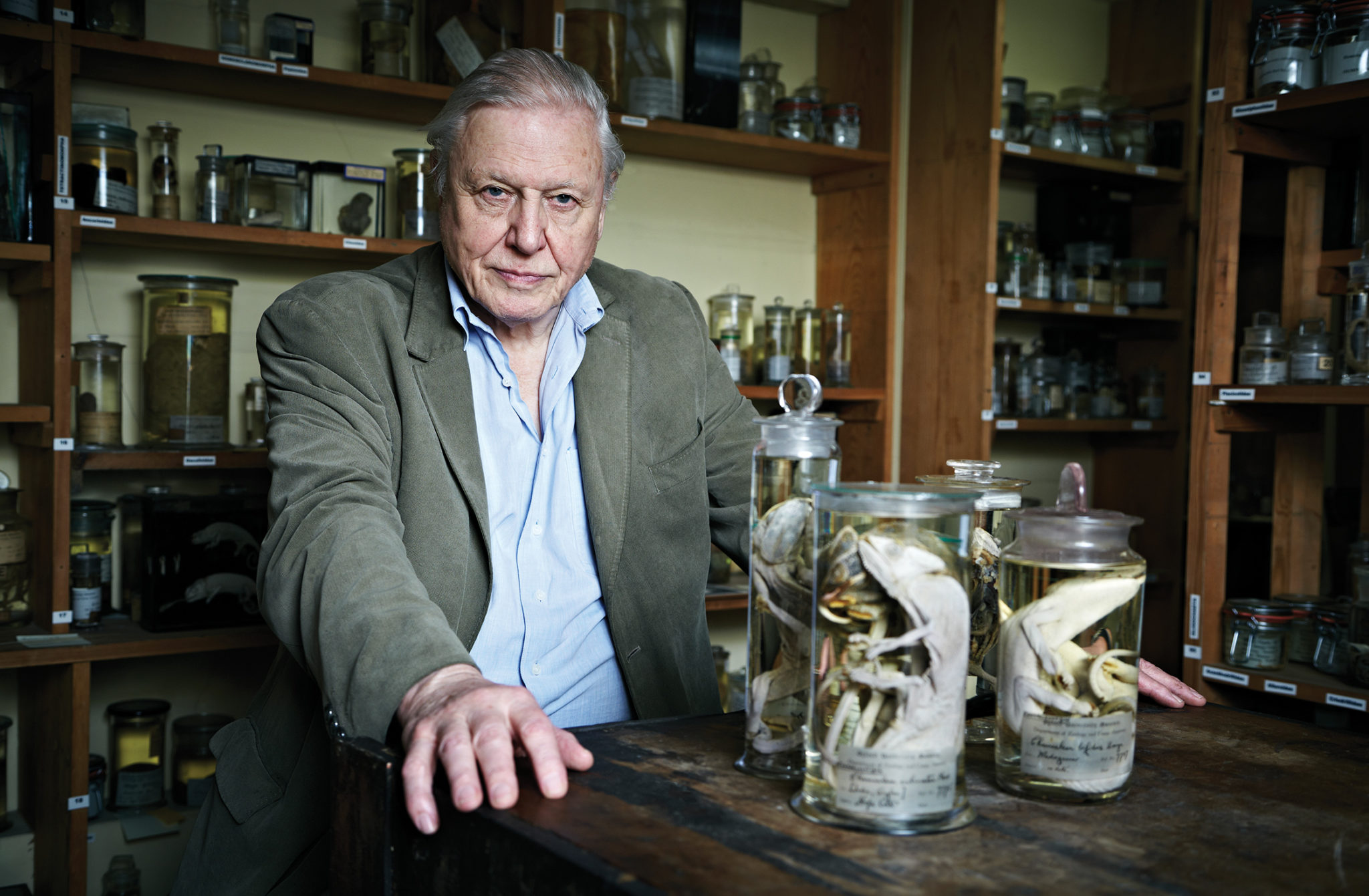 With our tenth birthday celebrations now in full swing (woo!), we’re rifling through the Peppermint archives and bringing back some majorly cool features from past issues – and what could be cooler than the big man himself, Sir David Attenborough. We caught up with him in Issue 19 to chat all things climate change, population growth and weird narration requests – we suggest you grab a cuppa, sit back and soak up words from one of the all-time greatest champions of the natural world.

There’s perhaps no narrative voice more famous than that of David Attenborough. From the nature documentaries of our collective childhoods to more contemporary series on climate change, population growth and oceanic pollution, Sir David has introduced generation after generation to the beauty, the intrigue and, most importantly, the vulnerability of our natural environment and its many inhabitants. He has been exploring this earth for more than 92 years, and he doesn’t plan to stop any time soon.

What’s your first ever memory of nature having a profound impact on you?

My fascination for the natural world began through collecting fossils and rocks when I was a young boy. I used to find it enchanting, and still do, that an animal millions of years old could be preserved right in front of you in a rock. We really would be lost without our understanding of fossils – it’s the magnifying glass into the past. And I guess for me it was a natural progression to move into living species, which I suppose I have done with relative success!

What do you treasure most about your work?

For me it’s the notion that I am merely the middleman in the process – the messenger, if you like. And I’m delighted that, despite my advancing years, I’m still being entrusted to convey the majesty of nature to a watching public. Naturally, spending time with these incredible creatures is an honour in itself, but it remains a greater honour that people still want to listen and learn. That fills me with great hope.

Do any particular highlights stand out in what must be a career of highlights?

Well, the one place that will always stand out for me will be the Great Barrier Reef. The first time I dived it I knew I had entered into a world so different to anything else on the planet that I’d never better it. I’ve been back many times and it never fails to inspire me. It is the ultimate as far as I am concerned.

What are some of the more difficult aspects of your job?

Patience, I suppose. Sometimes we may lay in wait for days just to get a glimpse – a few seconds – of an animal. Most of the crew have families back home, and days in the wilderness can often be mentally and physically exhausting, sometimes without any reward at all. When you’re missing people back home, it can be a difficult job.

What do you believe are the biggest lessons we as human beings can take away from animals and animal behaviour?

For me it has to come back to respect. We live in such close proximity to animals in our everyday lives, and then when we turn on our televisions we are there again – in sets, nests, dens. I think sometimes we need to take a step back and just remember that we’ve no greater right to be on the planet than any other animal.

I also think we should look more at animals and appreciate their interactions and communication. We can still learn an awful lot from those we share planet Earth with.

Your voice is a very famous one. Do you ever receive any odd requests for narration?

Now that’s an interesting question. I’ve never really wanted to get into voiceover work outside of nature documentaries. I know some people who think I’m on the television quite enough as it is. If I pop up advertising a brand of chocolate bar I fear it may be too much for some people!

I’ve always felt that my voice is just a vehicle for expressing what an incredible natural world we have. To exploit that link and use it for financial gain wouldn’t feel right, although I have had many requests to do so, yes.

You’ve opened the West up to a lot of natural locations previously largely unheard of – especially as holiday destinations. What effect do you feel tourism is having on these regions?

I’ll often come down on the side of the tourist. At the end of the day, if tourism is being managed properly – and in 99% of locations around the world it is – then it can only be a good thing for any place. You think about revenue especially – eco-tourism provides a source of funding that just wouldn’t be possible in most places, but also awareness of animals and plants, which is vital. Let’s be clear, eco-tourism saved many more species than it ever harmed.

Can you describe some of the areas where you’ve seen the most visible negative effects of climate change?

Well, you ask this question and people instantly think of the polar ice caps, and certainly the retraction of the ice sheets in some parts has been very worrying. But I think we’re getting to the point now where we’ll be looking closer to home when it comes to the true effects being seen. If you look at the hurricanes that now populate the Gulf Coast, the bleaching of the Great Barrier Reef caused by carbon dioxide in the water raising pH levels and even now the evacuation of some Pacific Islands because sea levels are rising – we have to realise all this stuff is happening, and it’s affecting people’s lives today.

Population growth is another issue intrinsically linked to climate change but one that seems to be largely missing from public debate. What are your views on the population crisis and how to best manage growth?

I think of all the countries in the world, population growth is relatively manageable in Australia! You are lucky – masses of space, plentiful resources, a fantastic standard of living and more than anything else, education and awareness. Sadly, these aren’t characteristics that other countries and continents can lay claim to, and that’s where all the problems begin. The natural world simply cannot cope with the total draw the human race is putting on it – at least, not in its current state.

To manage growth, we need to be more economical in what we do and less wasteful – and we are so, so wasteful, it’s criminal. Of course, we need education in terms of family size, because in the Third World there is not the responsibility that you find elsewhere on the planet, but if we look after the resources we have there is some hope. We also need to ensure we’re replenishing what we do use. There is only 10% of the original Brazilian rainforests remaining – it breaks my heart.

How optimistic are you that global leaders will come together and take real, meaningful action to address climate change? Or do you believe we’re in for more of a ‘damage control’ approach, and to what ends?

Well, the recent economic downturn hasn’t helped the progress that I think we were making. There had been some good strides towards climate change and population measures. All of those conversations have been parked though, because when there isn’t any money in people’s pockets their first priority is not the number of gorillas in Uganda, but whether the mortgage will get paid.

I think that’s fair enough, on a local level at least. But we still need governments to push environmental matters. We can’t afford to take our eyes off the ball, because otherwise a few years will pass and we’ll find ourselves going backwards. It still worries me tremendously that we’re not doing enough, and that has to start at the top table.

What are you working on at the moment? Do you think retirement will ever be on the cards for you?

I’ve had a really busy year and put together three big documentaries, so over the past few months I’ve been keen to spend some time back in London. I love the travelling aspect of my job – flying from Africa to Asia in quick succession – but time back around home comforts is extremely valuable for me.

Recently, I’ve been opening a couple of nature reserves and, as you would expect, there are plans in the pipeline for a new series, which I can’t reveal too much about at the moment. As for retirement, I’ll keep going until this old body suggests it’s probably time to give up. It is slowing down, but I’m sure it will see me through for a few more years yet. I couldn’t ever see myself not making documentaries – they have been my life.

What kind of world would you like to leave for your grandchildren?

One that builds on the tremendous advances in understanding we’ve made over the past 50 years. Future generations have every chance to do something even more special than ourselves.

Photo credit: UKTV. This interview first appeared in Issue 19 of Peppermint magazine – you can still buy that issue here!