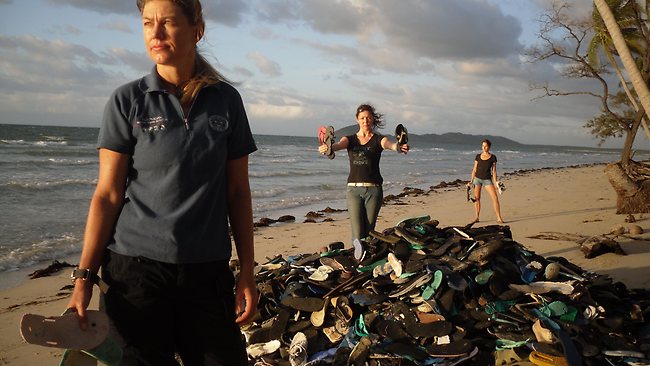 Sure, we’ve all daydreamed of being swept onto a gorgeous, remote beach… But what doesn’t figure into that fantasy is being washed up alongside over four thousand thongs! Chili Beach residents (all nine of them) woke up to this dirty reality recently when marine conservation group Tangaroa Blue Foundation led sixty environmental volunteers in a clean up of their Cape York idyl. The mammoth five day effort netted a whopping five tonnes of rubbish – over 50% of it plastic. The biggest bounty amongst this unwanted haul was thongs: 4,500 pieces of the iconic footwear were collected, adding rubbery bulk to a tip pile that included nasties like toothbrushes and combs. What’s most astounding is that the Queensland haven seldom sees a soul, never mind a sole. Unluckily for residents, it seems the remote northern beach is the final dumping ground for a trash trail that washes ashore from both international and local waters. Tourists may rarely make it to this sandy strip, but their trash arrives in waves.