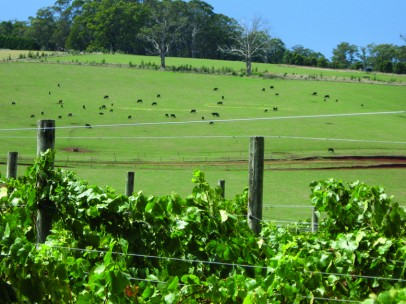 Tuesday night we had the pleasure of having dinner with Neil Prentice at French restaurant, Libertine. The man himself is no different to some of his wines in that he’s not backwards in coming forwards. His robust character (the man, not the wine) complements Libertine’s mild-mannered chef and their food and wine enjoy a similar relationship. All of Prentices’ wines are made biodynamically in Victoria and don’t contain animal products (lovely for vegans!). His property, Holly’s Garden is named after his daughter. He also grows Grass-Fed Tajima Beef and is known as a bit of a character…

We were treated to Holly’s Garden Whole Dry White on arrival, which was repeatedly described as ‘whacky’ and although enjoyable, certainly fit that description. Kingfish followed with a 2010 Prentice Pinot Ramato and Smoked pork loin played with 2009 Holly’s Garden Pinot Gris. A highlight of the night was the Roast duck served with four (yes, four) wines. The 2009 Moondarra Conception and 2009 Samba Side could handle lurking in their bottles for a little while longer, but that didn’t stop us enjoying particularly Conception, to the bottom of the glass. The 2009 Holly’s Garden Luddite Pinot Noir could also handle a little more time. The Pagan was a highlight, one of those wines that brings a wash of nostalgia over you and a tear to your eye. Lovely.

The Moondarra wagyu (also grown by Prentice) was served with a pied et paquet (described by a fellow diner as ‘a French moneybag’) and sauce Bordelaise alongside a 2005 Cavallatto Lange Nebbiolo. Quite agreeable.

Between each course Prentice gave us a background on the wines we were about to enjoy. Sadly we can’t share all Prentice’s stories here but one did stand out particularly. In the discussion of sustainability we often encourage certain choices because they are ‘good’. While us Pepperminters are motivated by our conscience, we’re also aware that not all people are. And Neil Prentice proudly identifies as one of those people who isn’t. Yet he farms biodynamically and his wines are vegan. Why? Because he’s found that’s the way to make the best product.

He describes his journey (or rather, return) to biodynamics, like this, “I was in love with Pinot Noir. It was made biodynamically. I thought what the f___ is biodynamics? [With regard to winemaking] I have no morals I have no ethics. I don’t practice biodynamics for any sort of ethical reason. I don’t do green things for any sort of ethical reason. I just try and grow better grapes. I was reading about biodynamics and this cow shit from a lactating cow and a cow horn buried under ground and it’s all got to do with calcium. I thought I recognise that. So I went and asked my uncle, ‘Why the crap were you into biodynamics in the mid to late 60’s?’ He had no idea what biodynamics were. I said, ‘Well, you beat the daylights out of me for digging up the cow horns from under the Cyprus trees.’ ‘Yeah, well what’s that got to do with biodynamics?’ ‘Well what were you doing?’ I pushed him and pushed him and pushed him and it was all the stuff that his father, my grandfather told him about old European farming. Seven year cycling farming. If you walk out at night and you’re doing this [picture a hand gesture suggesting you’re about to rock] it’s not because you’re into Judas Priest or biodynamics, it’s to measure the distance between the stars and the horizon. He did all of his farming at the right stage of the planets, not so much the moon – it was more about the planets. Jupiter opposite Venus meant something.”

Prentice has had the opportunity to read some of his Grandfather’s diaries. “He [Prentice’s Grandfather] kept a daily diary about his farming techniques and what he was doing and it was what Steiner reinterpreted and became biodynamics, but the truth about it is, to me, it’s instinctive, inherited pagan middle European farming. And you didn’t talk about it because you didn’t want the neighbours to know that you were a nutjob that farmed on the cycles of the planets and the moon and if you want to go back another three generations you didn’t talk about it because the Catholic church would hang you as a witch. The witches and the warlocks were the people who had all the information about old European farming.”

Whether it’s witches and warlocks, European tradition, or sustainability which motivates farmers and winemakers, we’re always keen to see excellent, biodynamic wines and responsibly grown livestock. If you’re keen to hear more yarns about wine, beef and more, there are still a few spaces at the dinners in Melbourne and Sydney.