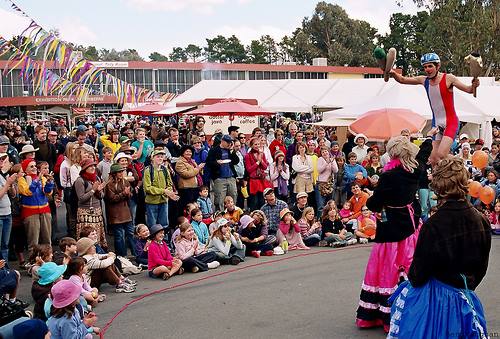 It’s the time of year when folk aficionados get ready to let their hair down at the annual National Folk Festival in Canberra, running 2-6 April at beautiful Exhibition Park. And despite the excellent line-up of acoustic, folk, blues, roots, world and country music, including over 180 acts from Australia and more than 23 acts from overseas (like folksy luminaries Bob Fox, The Outside Track and All Our Exes Live in Texas), there’s more to the Nat Folk Fest than its sweet tunes!

For its 49th year, there’s an emphasis on getting in touch with your crafty side, with workshops and classes on bookbinding, wood crafting, screen printing, leatherwork, batik dyeing and more. The festival also has continuous projects that link audiences through the years, such as a rag rug started in 2010, a quilt started in 2011 and a woven CD installation that’s kicking off this year – with the creativity culminating in the gorgeous parade that will be winding its way through festival village and lighting up the night sky on Sunday. And there’s plenty on the cultural menu for young and older folks alike, with interactive highlights including puppet shows, poetry slams, dance classes, street choirs and an ‘Animals of the Dreaming’ Aboriginal Zoo experience with the travelling Taronga Zoomobile.

If that all sounds right up your street, we have two season tickets (valued at $690) to this year’s National Folk Festival to give away! To be in with a chance to win, leave a comment below telling us which act you’d most like to see there. {Entries close 5pm AEST Friday 6 March, 2015}.