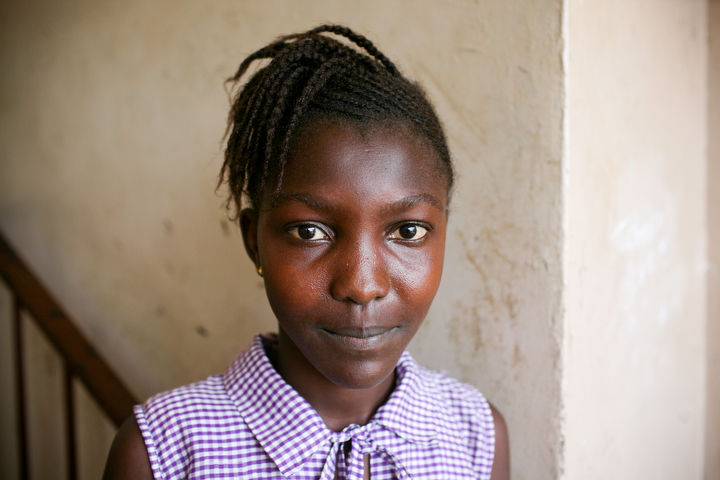 Every October, not-for-profit organisation One Girl invite men and women, boys and girls to frock up in a school dress in the name of their major annual fundraiser, Do It In A Dress. “The concept is easy – you pick any challenge you like, raise a minimum of $300, and do it in a school dress,” says one of 2013’s participant, Roz Campbell. Money raised helps One Girl’s campaign to get more girls in Sierra Leone a formal education. But aside from financial hurdles, limited options are available for managing menstruation in the country: another big reason so many girls miss out on schooling in Sierra Leone. So, planning to launch her own sanitary pad business later this year, Roz decided to make her Do It In A Dress project all about menstruation. Planning to test some of the methods girls in Sierra Leone use to manage their periods, Roz has set herself a challenge to say the least. We spoke to her about her research and what she hopes to achieve.

How do most girls in Sierra Leone manage their periods?

The more research I do, the more shocking it becomes! Initially Chantelle Baxter [One Girl Co-Founder] told me stories of girls using ‘pieces’ – which are old rags. They don’t get washed properly and are left to dry in the dark damp areas of the house so no one will see them, which is a breeding ground for infections. The other methods I have heard about are layered underwear, kitchen sponges, toilet paper, newspaper, leaves and bark, chicken feathers, piling up dirt to sleep on and sweeping it away in the morning. I recently read that some younger girls even find used sanitary pads in the rubbish and use those.

I should also note that tampons and menstrual cups are not physically or culturally appropriate in Sierra Leone, as the majority of girls have been circumcised, only leaving a small opening for urine and blood to pass through.

What period management approaches will you be trying for your Do It In A Dress campaign?

For each day of my period I plan to road test a different method, and report back on the experience. At this stage, I will be making some pieces, using a kitchen sponge, layering underwear, paper, and leaves and bark – and maybe feathers if there’s time. I might try sleeping on some sand at nighttime and see what happens there.

Which method are you least looking forward to trying?

To be honest, I’m not looking forward to the whole experience. It’s going to be awkward and uncomfortable at a time when I’m usually more sensitive and emotional. I already know I’m going to be paranoid about getting blood on my dress, but I have to try and live life normally. Going to work and socialising is going to be hard. I haven’t even done it yet, but already it’s highlighting the issues girls in Sierra Leone face every month.

Why do you think education for girls is important?

I’ve memorised the One Girl moto which sums it up perfectly. “An educated girl is three times less likely to contract HIV/ AIDS. She’ll marry later and have fewer, healthier children. For every extra year of schooling her income will increase by 10-25 percent. Not only that, she’ll reinvest 90 percent of the money she earns back into her family. Educating a girl has a ‘multiplier effect’. An educated girl can change the world.” That’s why I believe education for girls is important.

How can other people get involved?

Sign up to Do It In A Dress! Tell your friends and family! Or, if you don’t want to do your own challenge, you can support me here. I’ve already raised enough funds to send two girls to school, but would love to see that grow.