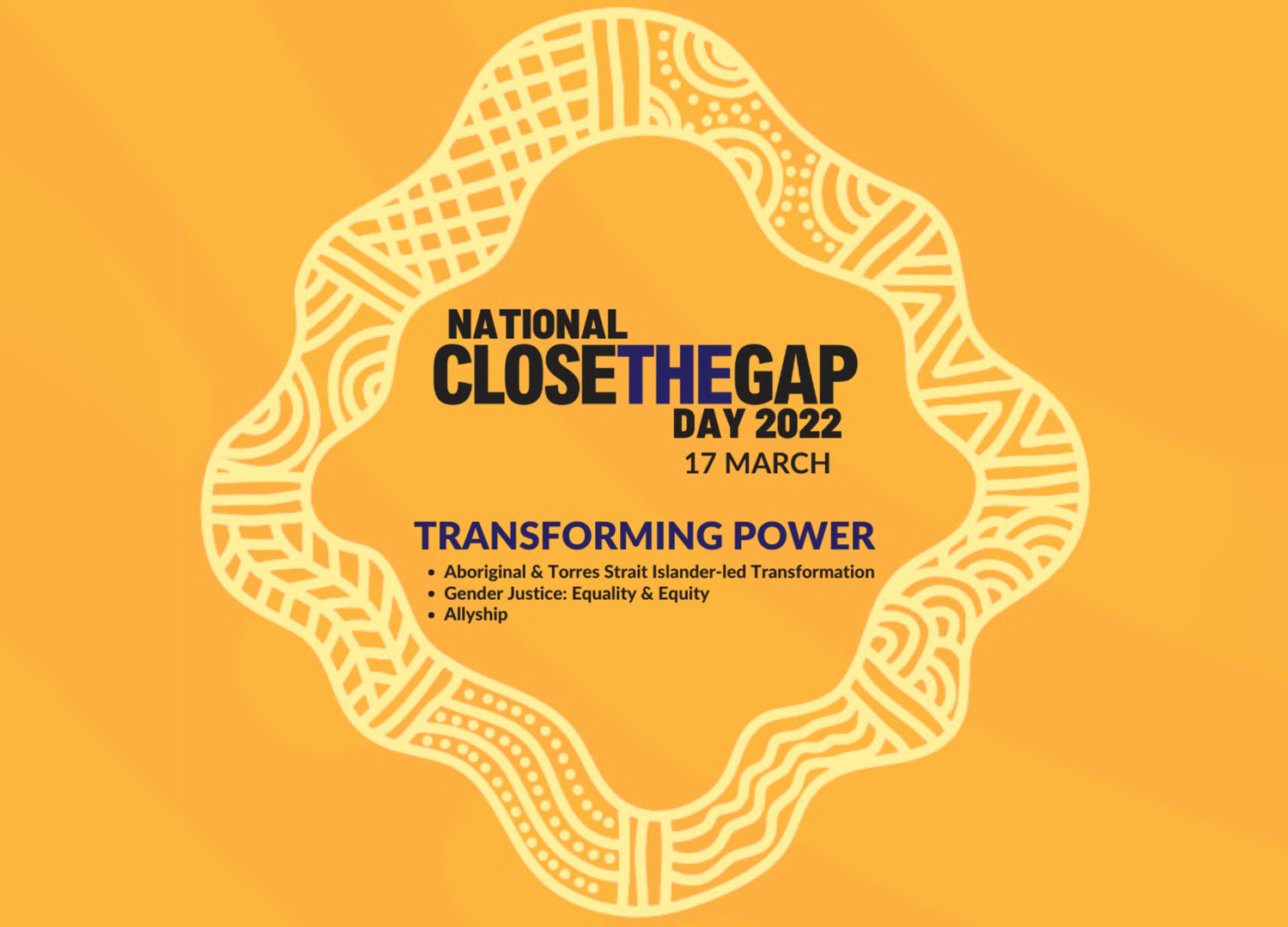 Since 2007, the third Thursday in March has been bookmarked to observe National Close the Gap Day. This day provides the opportunity for Australians to educate themselves on the health inequities that continue to impact the lives of Aboriginal and Torres Strait Islander peoples. In recent years, the world has been tuning in to the systemic issues impacting First Nations peoples and other minority cohorts, yet Australia’s attempts at closing the gap continue to lag.

In recent years, the world has been tuning in to the systemic issues impacting First Nations peoples and other minority cohorts, yet Australia’s attempts at closing the gap continue to lag.

For me, national days for First Nations peoples and cultures provide an opportunity to reflect on what it means to be Australian. Broadly speaking, Australia ranks highly for its quality of life, but this reality isn’t the status quo, especially for ethnic and cultural groups across the country. The life expectancy of Aboriginal and Torres Strait Islander peoples is roughly 10 years lower than that of non-Indigenous Australians.

Following a community-driven campaign to develop goals and strategies to close the gap, the Australian Government made a formal commitment in 2008 to improve health conditions for First Nations peoples. Unfortunately, this commitment was solely between government agencies which undoubtedly played a role in why the campaign only met two of the seven Close the Gap targets in its first 10 years.

A change in recent years to the National Agreement on Closing the Gap provides some confidence that Australia is on the right path to make meaningful and sustainable change in the lives of First Nations peoples. In 2019, there was a shift from having only Australian government agencies as parties to the agreement to including representatives of Aboriginal and Torres Strait Islander peoples. The Government announced that this shift stemmed “from the belief that when Aboriginal and Torres Strait Islander people have a genuine say in the design and delivery of services that affect them, better life outcomes are achieved”. This was a critical development in understanding the complex nature of Indigenous health. The National Agreement now has 17 targets across education, employment, health and wellbeing, justice, safety, housing, land and waters, and languages.

READ MORE – Get Up, Stand Up, Show Up: Why 26 January Can Never Represent a Day of Unity 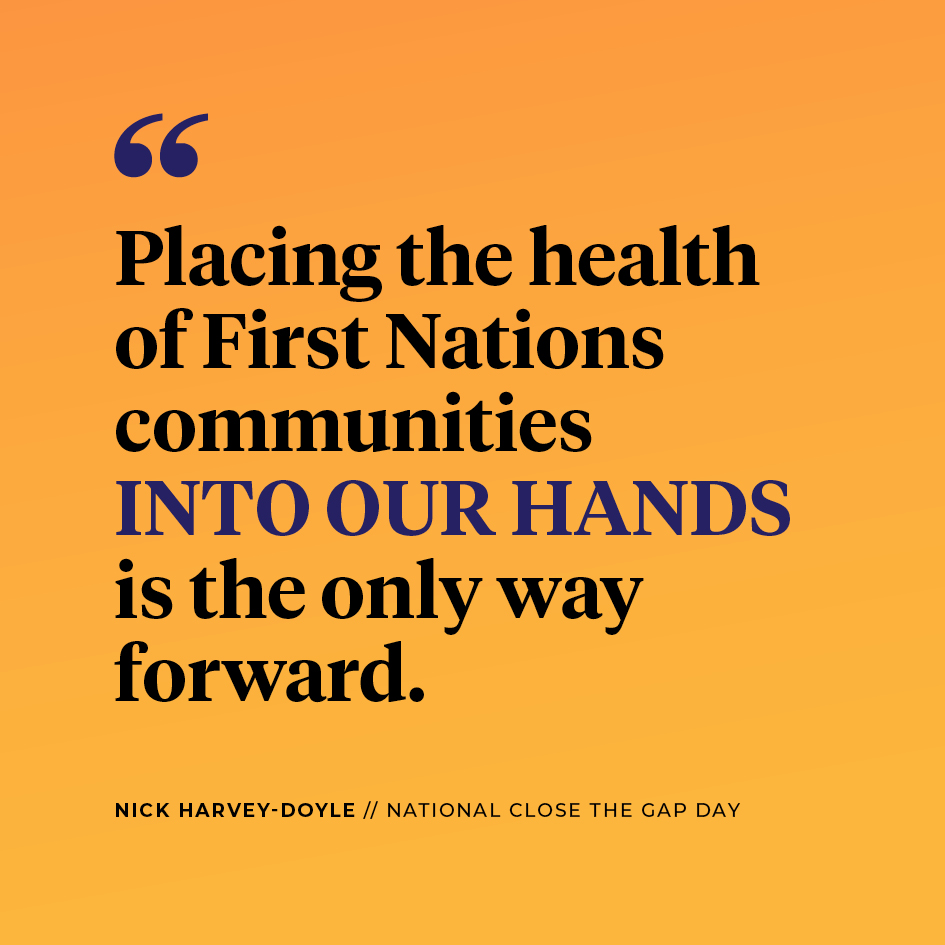 If anything, today I encourage you to broaden your understanding of what ‘health’ means. Health is not a siloed outcome or linear perspective of life. Aboriginal and Torres Strait Islander notions of health and wellbeing are holistic and include not just a physical state of being but also social, emotional, relational and spiritual aspects of life, including connections with Country, land and community. This is why conversations around First Nations health often include discussions of employment, housing, education, environment and socioeconomic factors. These are all essential considerations in achieving positive health outcomes. In trying to close the gap with a primary focus on health, especially in the absence of First Nations voices and decision-making, the system was trying to apply a broad-brush approach to a complex and intricate canvas of issues. Structural change is not achieved with a homogenous approach.

Surely real structural change relies on having the right people at the table when critical decisions are being made? By “right people”, I mean First Nations people. Ownership of issues and solutions must be with First Nations peoples and communities and the evidence of successful First Nations-led initiatives is ample. Waminda Aboriginal Women’s Health Service delivers the Dead or Deadly program to First Nations women within the Shoalhaven region of New South Wales. It’s a holistic program focused on physical activity, nutrition and diet information, smoking cessation, and chronic disease prevention and management. A study of the Dead or Deadly program reported significant positive changes in the health and wellbeing of program participants, including physical health, employment, self-esteem, family, education and cultural connection. The results of this program show that holistic, empowering and community-owned solutions work.

In trying to close the gap with a primary focus on health, especially in the absence of First Nations voices and decision-making, the system was trying to apply a broad-brush approach to a complex and intricate canvas of issues. Structural change is not achieved with a homogenous approach.

Clothing the Gaps Foundation provides another successful example of an empowering community-run and -owned program. The foundation is an independent Aboriginal-led not-for-profit that aims to get Aboriginal people and communities more physically active to add years to their lives. Each year the foundation holds a series of virtual runs that provides Aboriginal communities with virtual tools and resources to organise running events within their own communities. This program allows First Nations peoples to be the drivers of healthy behaviours and change within their own communities, as well as keeping communities connected to Country and each other. The foundation has planned a virtual run for National Closing the Gap Day.

Despite the importance of First Nations-owned and -led approaches, non-Indigenous organisations and stakeholders do have a role to play in closing the gap. However, such involvement should always be tempered by awareness and humility in knowing when to listen and be guided by First Nations voices. While National Close the Gap Day might be foreign to you, I encourage you to reflect on what equality looks like – especially in a country that prides itself on an accessible and high-quality health system.

These women are our mothers, daughters, sisters, aunties, grandmothers, friends and colleagues. They deserve better.

The need to close the gap is urgent. First Nations women are the most socially and economically disadvantaged population group in Australia, not to mention they are around 21 times more likely to be imprisoned. These women are our mothers, daughters, sisters, aunties, grandmothers, friends and colleagues. They deserve better.

I recently came across an article that expressed the exact point I want to articulate. Casey Millward, a Kalkadoon woman and senior policy advisor, wrote “An open letter to non-Indigenous people who work in Indigenous affairs.” In her letter, Casey writes: “When you tell me you don’t understand why Aboriginal children don’t finish school to help lift themselves out of poverty, you are talking about my cousins who lived in overcrowded housing and needed jobs to feed their kids. And you might not know it, but you are talking about me.”