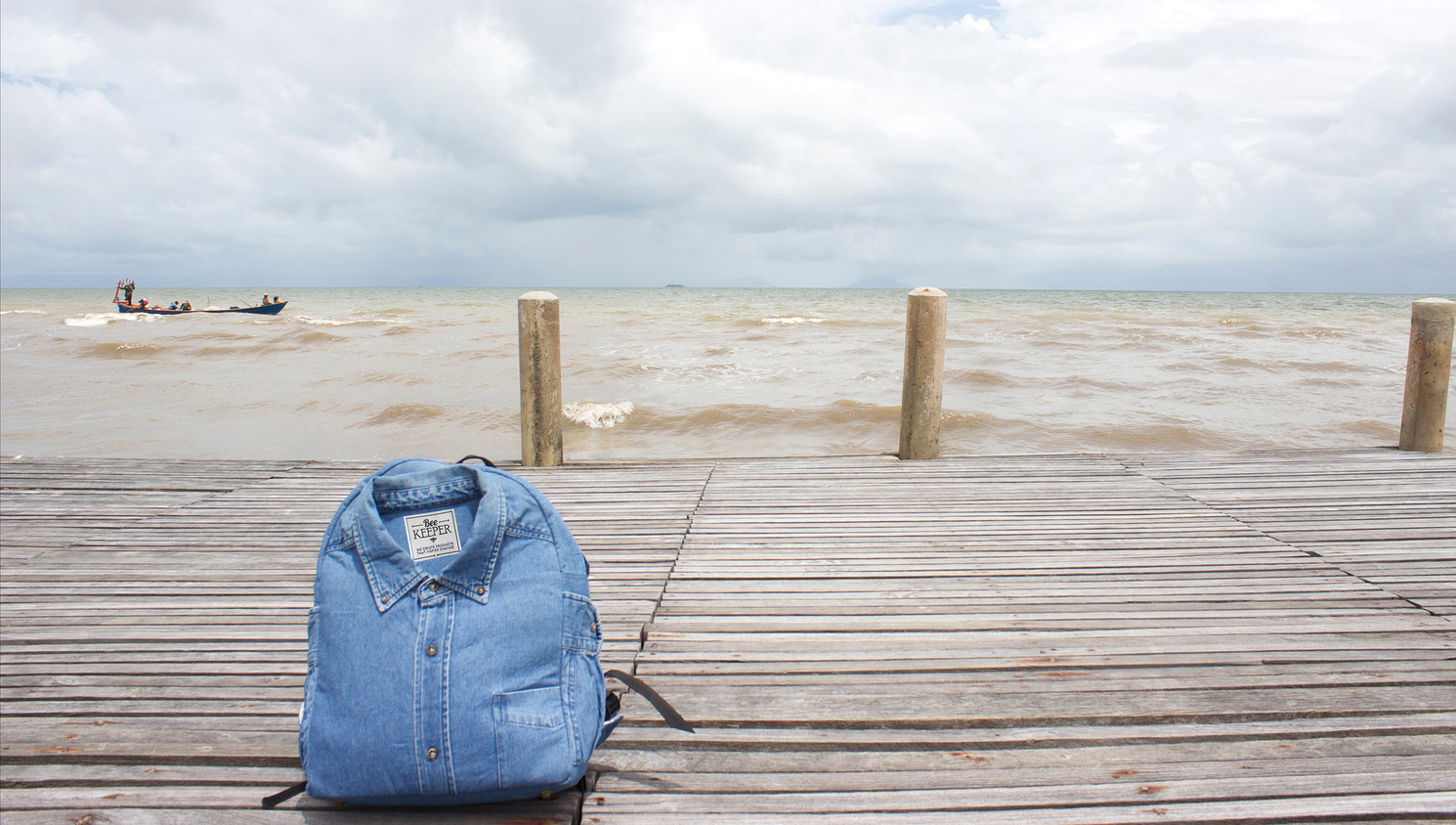 Koky Saly keeps his promises. Searching for a way to fund his charity BabyTree Projects, Koky cottoned on to using discarded fabrics to make backpacks. The sales from BeeKeeper Parade bags go towards educating children in his native Cambodia – a cause his sister Sophia was passionate about. Before passing away from cervical cancer, Sophia asked Koky to continue to inspire change in the world; five years later, he’s continuing that mission and enjoying newfound fame thanks to a recent Humans in Melbourne post.

Tell us about BabyTree Projects.

I would often find myself thinking “My gosh, I can speak English today!” and that happened because I was sent to school – because people showed courage and kindness and pulled me out of war. I wanted to say thank you, and the best way I could think of was through education. It’s critical for kids in rural Cambodia in particular.

BabyTree Projects still exists as its own charity and entity; we’ve raised more than half a million dollars over a ten year period. Boy and Bee [now called BeeKeeper Parade] came about in 2008 – two years after BabyTree – when we realised we couldn’t keep asking for donations. It was quite hard and not reliable. I saw profitable businesses, and I just thought “Why can’t I be one of them?”

How has Sophia shaped the business?

Sophia left me her car in her will. Her instructions said to sell the car and use the money to make sure that Boy and Bee happened, and to continue to inspire change in the world. I made a promise. I also promised her we’d build our fifth school on a beach in her memory – she said ‘please don’t!’ We built that school and named it the Sophia Saly School – I wanted to celebrate my sister, a human being who really did give back to the world. That’s something worth recognising.

Why the name change from Boy and Bee to BeeKeeper Parade?

The boy and bee was a story I wrote about a 10-year-old kid that thought he could change the world, so he went out and tried to do it. He failed until he worked with his best friend, the bee, which was Sophia’s role. I changed the name from Boy and Bee because I’ve aged a lot inside [since Sophia died] and didn’t feel like that boy anymore – but I wanted to keep her in it as she was the bee.

I surveyed BabyTree Projects supporters about which products they’d buy to support the programs in Cambodia, and they listed a few things like stationery and school products. As I researched more into Cambodia’s economy and industries, I realised that there were no paper mills. Then I learned that the textile industry is their second biggest industry and there was an excess of fabrics and discarded clothing coming into Cambodia and ending up in landfill. There were a lot of XXL Hawaiian shirts that no one in Cambodia would wear, so I thought ‘how can I turn this into something useful?’ I came up with the backpack idea, but I didn’t know if it was going to work. 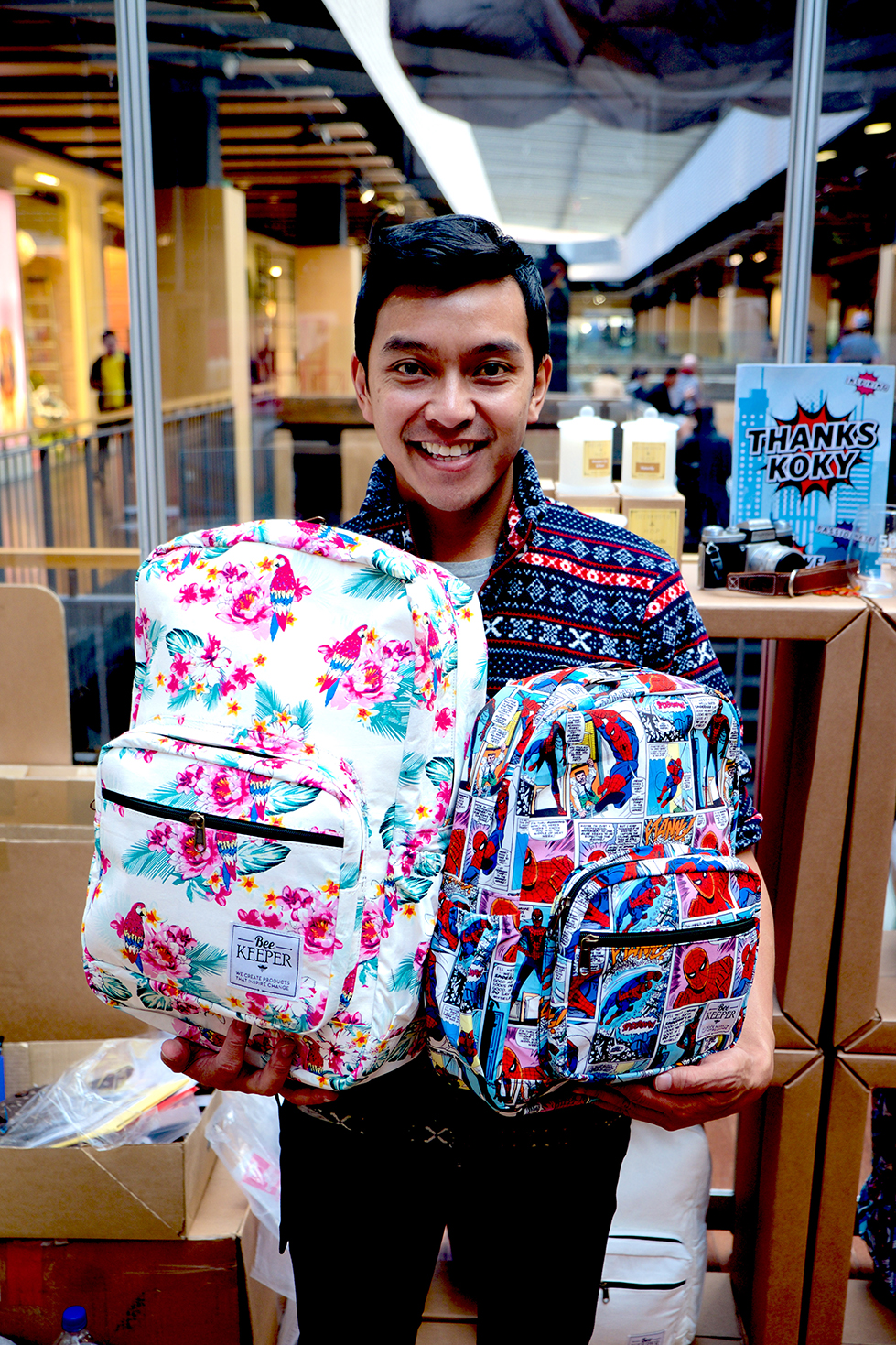 How did you find a retail space?

I know this sounds cheesy, but the more love you throw at the world, it comes back at you. I wasn’t part of RMIT’s fashion school but they heard about my work and invited me to be part of their market stall in Melbourne Central. The centre’s leasing executive loved my story and gave me the opportunity to fill an unused shop for five weeks for free. And that’s been happening every month – she’s found me a new spot in the centre to use.

How much of BeeKeeper Parade’s growth has been planned?

I’ve never had a business plan. I do mind maps, which are much more natural to me, rather than a 60-page document that no one reads. It may look random, but I have my overarching vision and then my mind map helps me get there.

People tell me you need balance in your life, and I totally get that, but I’ve learned that when people say that, it’s more a reflection of their own search for balance. Balance is different for different people at different times of their life. Mine was 24 hours a day, 7 days a week in the business. I don’t think people around me completely understood how keeping this promise heals me and saved my life. It’s where I’m happy, in the shop. When people pulled me away even for just a week I would quickly become sad. Last year was the first time I was able to say I was happy again, and it was at that moment I realised that I can be content outside of the shop and outside of the promise.

The Humans In Melbourne Facebook post about you received over 7000 likes. How did that publicity help the business?

Chris from Humans In Melbourne met me last year in April and recently reposted the story. As he had a lot more followers, the impact this time around was crazy. We broke our shop sales record every day for 7 days straight, our Facebook followers increased by 3500 people, our online sales quadrupled and we still get loyal supporters coming through .

Can people make their own backpacks?

We give people the opportunity to bring along a sentimental fabric and come into our workshop to be part of the making process. They’ve become very popular. You don’t sew in the workshop—we want to make good bags too, so no sewing! We talk about the process and how many pieces it takes to make one bag, and then the participant gets the opportunity to chalk and cut all of the outside pieces. They get to choose how the bag will look which is fun.

What does the future hold for BeeKeeper Parade?

My goal was to keep a promise, and I feel like I have now. I’ve decided that this idea of this promise needs to be given everything I’ve got, which means I need to be clearer on where I want to go. I’d also love to have a stronger voice when I stand up for issues that are really important to me, like the way we waste things in this world and how we make our clothes, and also other things like marriage equality. I think having more money behind me [because of the recent publicity] allows me to do that. I kind of owe it to the idea to see if we can get to a million dollars.

I know this sounds cheesy, but the more love you throw at the world, it comes back at you.