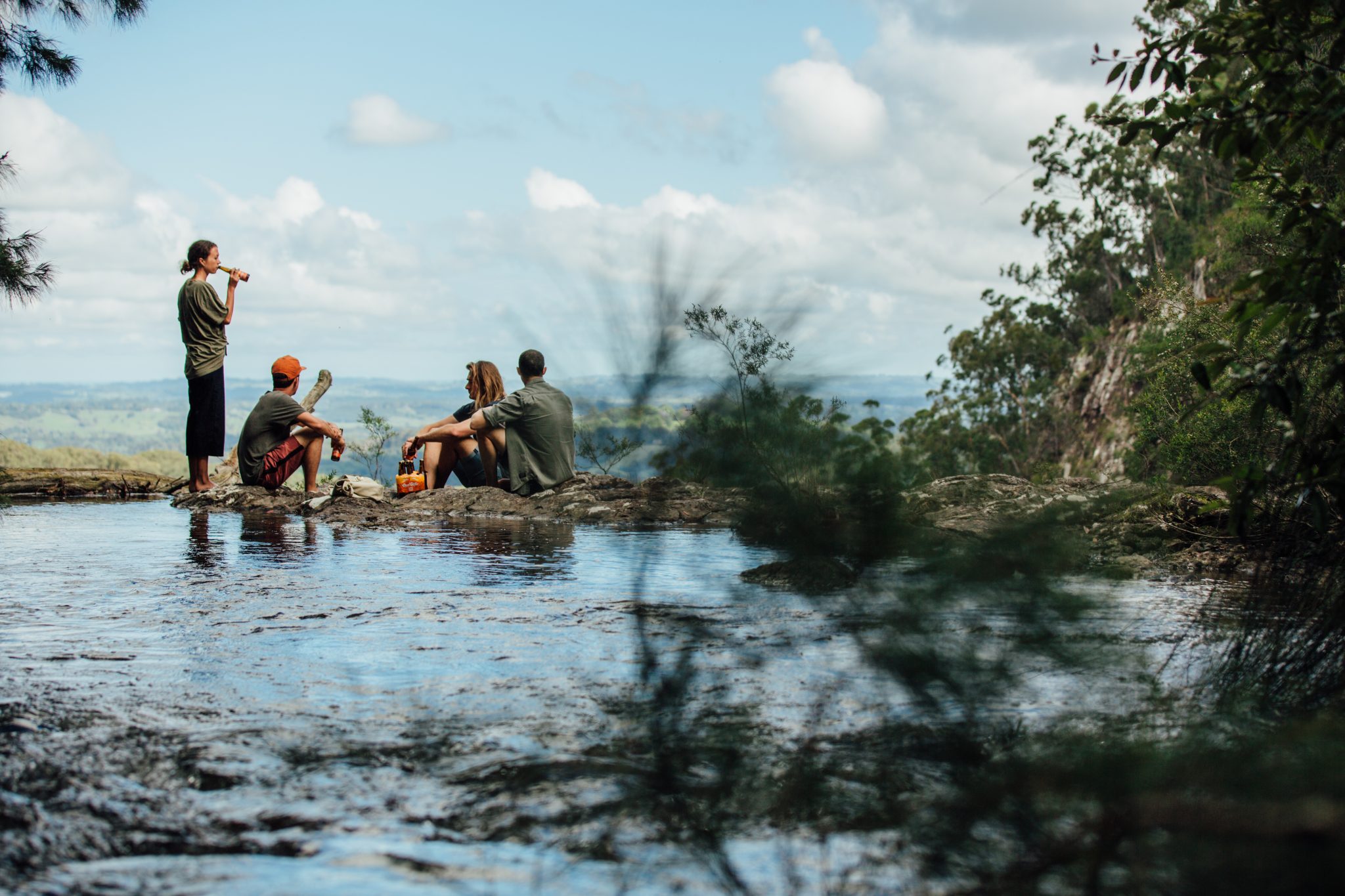 Settled between the glistening beaches and resplendent hinterland of Byron Bay, Stone & Wood Brewing Co. honours the bygone age of the traditional village brewer – with its unwavering connection to community and place. 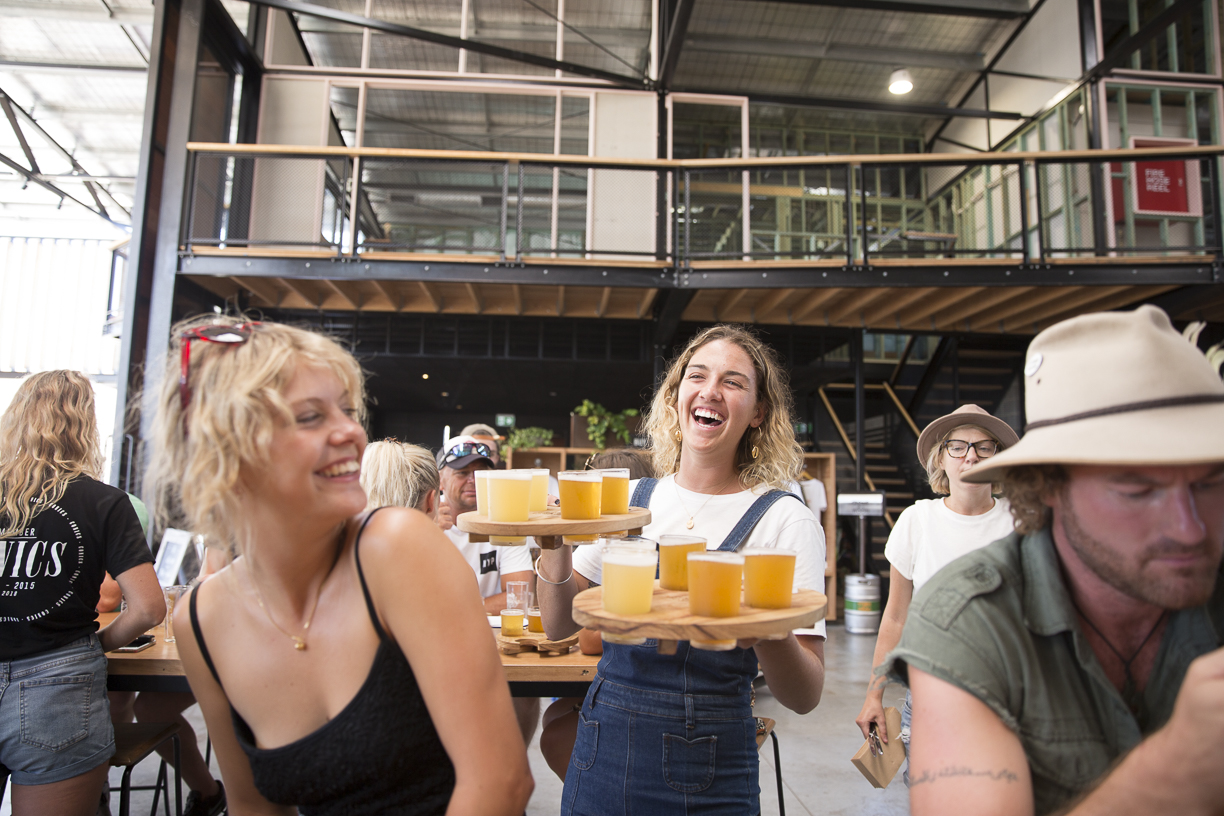 Ten years ago, after leaving their jobs at multinational beer companies, friends Brad Rogers, Jamie Cook and Ross Jurisich relocated to Byron Bay to start their own brewery in hopes of “shedding the corporate garbage and getting back to basics”.

Now, a decade spent brewing beer in the Byron Bay region has seen their labour of love Stone & Wood become an integral part of the community – a responsibility the brewers do not take lightly. With a host of innovative programs aimed at preserving the land they inhabit, and serving the people they share it with, the brewery is simultaneously harking back to forgotten traditions while planning for the future.

Just like a village would have the local butcher and baker, the local brewer was part of the communal fabric.

“Traditionally, a brewery didn’t just supply fresh beer to the locals; it could also be relied on to help support the wider community,” James Perrin, Stone & Wood’s sustainability manager, explains. “Just like a village would have the local butcher and baker, the local brewer was part of the communal fabric and would serve as a meeting place for people and support local causes.”

With Australia’s craft brewing industry seemingly at its peak, there is a boundless selection of beer varietals to choose from. The success of Stone & Wood, it seems, is owed not only to its much-loved brews made from local ingredients, but also to the brand’s conscious approach to brewing. Careful not to put any additional strain on the environment during its brewing practices, the company has launched its Green Feet program to ensure it’s continually striving toward the best possible processes. “We acknowledge that the brewing process can be quite energy and water intensive, and, as a manufacturer, we do create waste and use packaging materials. Under our Green Feet program, we’ve set global best practice targets for water, energy, and waste to landfill, which we are on track to meet over the next couple of years,” James says. 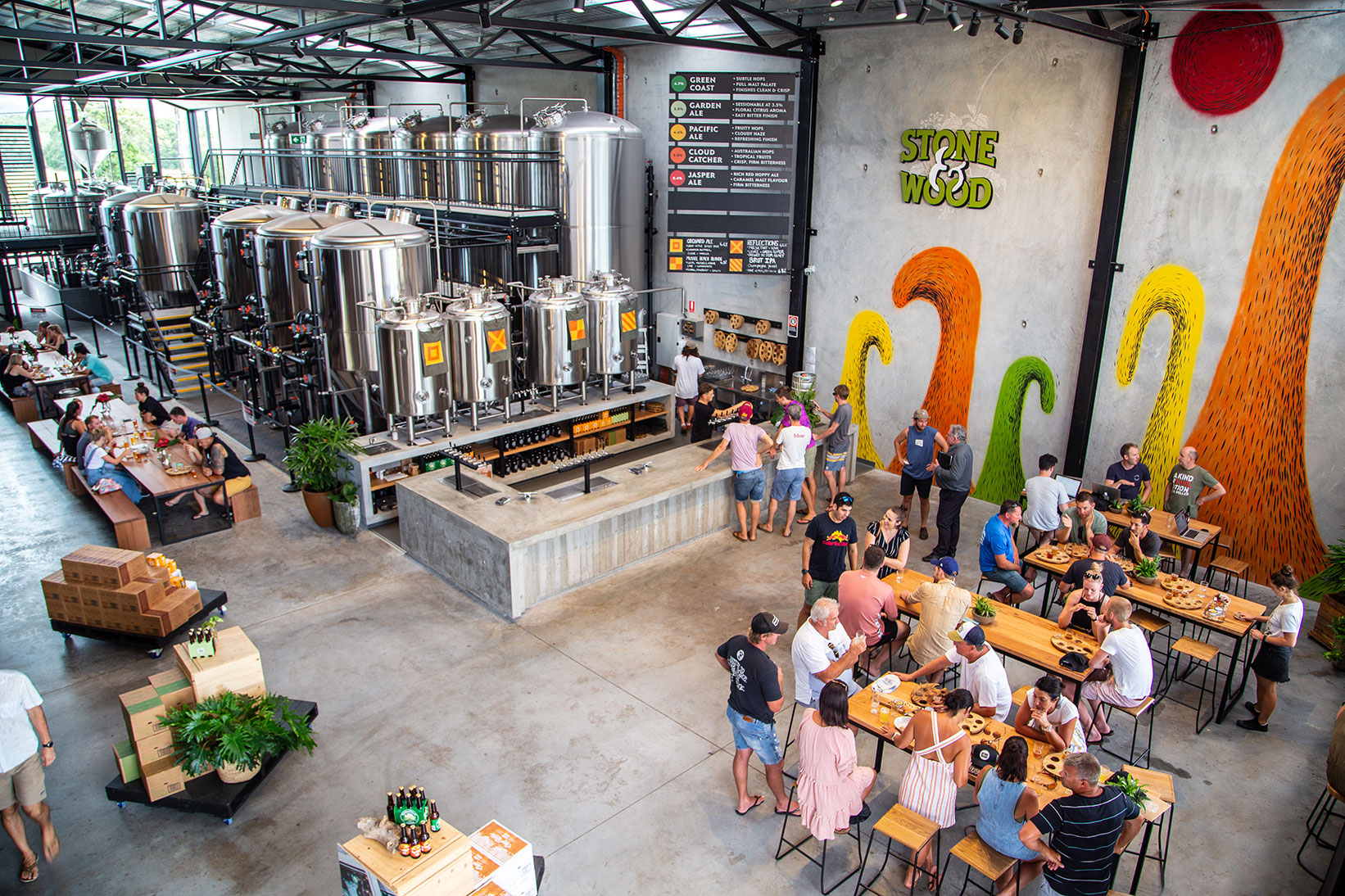 But what happens to the by-product that naturally results from brewing? To make use of the would-be-waste, the brewers have developed a relationship with a neighbouring farmer, who now takes the brewery’s organic waste – including spent grain, yeast and hops – which is then used on local farms as cattle feed and compost. And, when it comes to packaging, the company has developed its own recycling system.

“We wanted to make absolutely sure that our solid waste was going to the best place. So we purchased our own colour-coded skips and we separate out all of our streams and send them direct to recyclers. Our glass goes back to our bottle supplier to be made into new bottles; our cardboard and soft plastics we bale up on site and send to bulk recyclers; and our co-mingled recycling and general waste we monitor and transport ourselves to ensure we are minimising waste to landfill. We’re aiming for less than one percent to landfill by the end of next year,” he explains.

“But for us, Green Feet also extends beyond the boundary of the brewery’s walls. We want to increase the reach of our sustainability efforts and, as such, we now aim to implement projects with key stakeholders each year – including working with suppliers, customers, government, and the Independent Brewers’ Association.”

Since 2013, more than $630,000 has been raised for not-for-profit and grassroots organisations, alongside individuals and community causes.

The end product is being used as a force for good, too. Each month, as part of its InGrained program, Stone & Wood holds its Karma Kegs events in different parts of Australia, where the brewers donate a keg to a pub, which then raises money for a local cause. Further funds are also raised via the brewers’ Byron Bay Tasting Room and other events. Since 2013, more than $630,000 has been raised for not-for-profit and grassroots organisations, alongside individuals and community causes. “InGrained is our community-focused program. It’s about supporting the people that support us, and ensuring we give back. This includes opening up our brewery as a meeting space for events as well as raising funds to donate,” James says. “We also recently launched the InGrained Foundation, which is an independent not-for-profit that aims to support grassroots environmental and social charities. By establishing the InGrained Foundation, we’ve created a formal, separate entity and have made the commitment to annually donate $1/100L of beer brewed going forward. This also includes holding annual events. At our Murwillumbah site Open Day we raised $30,000 for Wedgetail Retreat Palliative Care, and at Festival of the Stone we raised $17,000 for Big Scrub Landcare.”

With many of the brewery’s neighbouring farmers in desperate need of help during the long-drawn-out drought, the Stone & Wood team is also lending a hand with the Brews for Bales relief project. “We’ve put on Karma Kegs in pubs in the Northern Rivers to raise funds. We wanted to ensure that 100% of the funds we raise were having a direct impact for farmers, so we’ve decided to purchase the bales and hire the trucks ourselves. The bales are purchased from Northern Rivers farmers, and the trucks are sent out over the Great Dividing Range to farmers in need in Northern NSW,” James says. 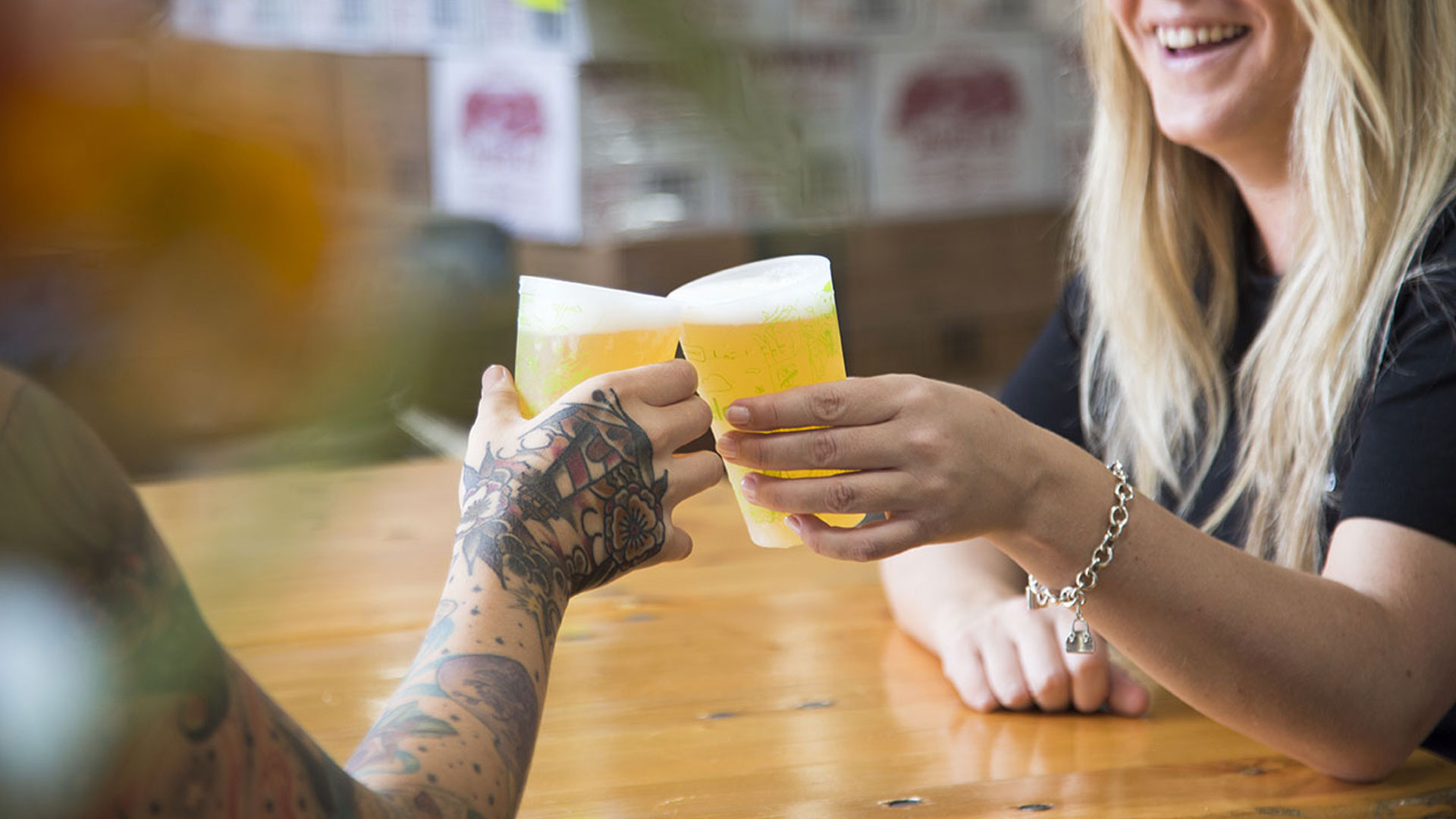 “We were finding that we weren’t allowed to refill used cups at events due to food hygiene reasons, and we couldn’t bring glass cups or bottles for safety reasons. Instead of single use plastic, we were able to partner with a BPA-free, hard-plastic cup supplier on a cup exchange program. The idea is that drinkers purchase their cup with their first drink. The cup can then be taken homeand used again and again, or returned for a refund,” James explains. “For those wishing to have another beer, they can exchange their cup for a fresh cup for no extra cost. All cups are then removed from the site and commercially washed to Australian Food Safety standards. The cups can then be used again for future events. We’ve rolled this out at multiple local events and have shared it with local councils and businesses so that they can implement similar programs.”

As part of the program, employees have the opportunity to become shareholders in the business, partake in annual volunteering days, and, after five years, join the founders on an all-expenses-paid ‘Road to Munich’ trip to visit the breweries and towns that inspired Stone & Wood to become a village brewery.”

Our social and environmental programs are an integral part of the business, not something that sit to the side of the balance sheet.

As well as taking care of its team, the brewery is proud to be a certified B-Corp, which means it has joined a growing community of businesses that operate for purpose, not just profit. “B-Corp certification allows us to continuously review and improve on many of our practices – kind of like holding a magnifying glass to our business to ensure we’re doing our best,” he says. “I think for consumers this provides some assurance that there are businesses out there with authentic values. It’s about ensuring we are doing what we say we’re going to do, and that our social and environmental programs are an integral part of the business, not something that sit to the side of the balance sheet.”

Never a company to rest on its laurels, Stone & Wood has plenty of plans in the works too. In addition to its Byron Bay brewery and taproom and its Murwillumbah brewery, a new venue will join Brisbane’s growing beer community in 2019. “Where the Byron brewery is the original functioning brewery with a taproom to sample the range and have tours, and the Murwillumbah brewery is our main production site, the Brisbane venue will be a brew pub where punters can come in and taste our beers, have a tour, and see some unique batches brewed on the 600-litre pilot system. A big part of what we do is centred around education and developing people’s appreciation for good beer, and we feel we can add to Brisbane’s good beer scene as well as establishing an outpost for our Brisbane-based crew,” James reveals. 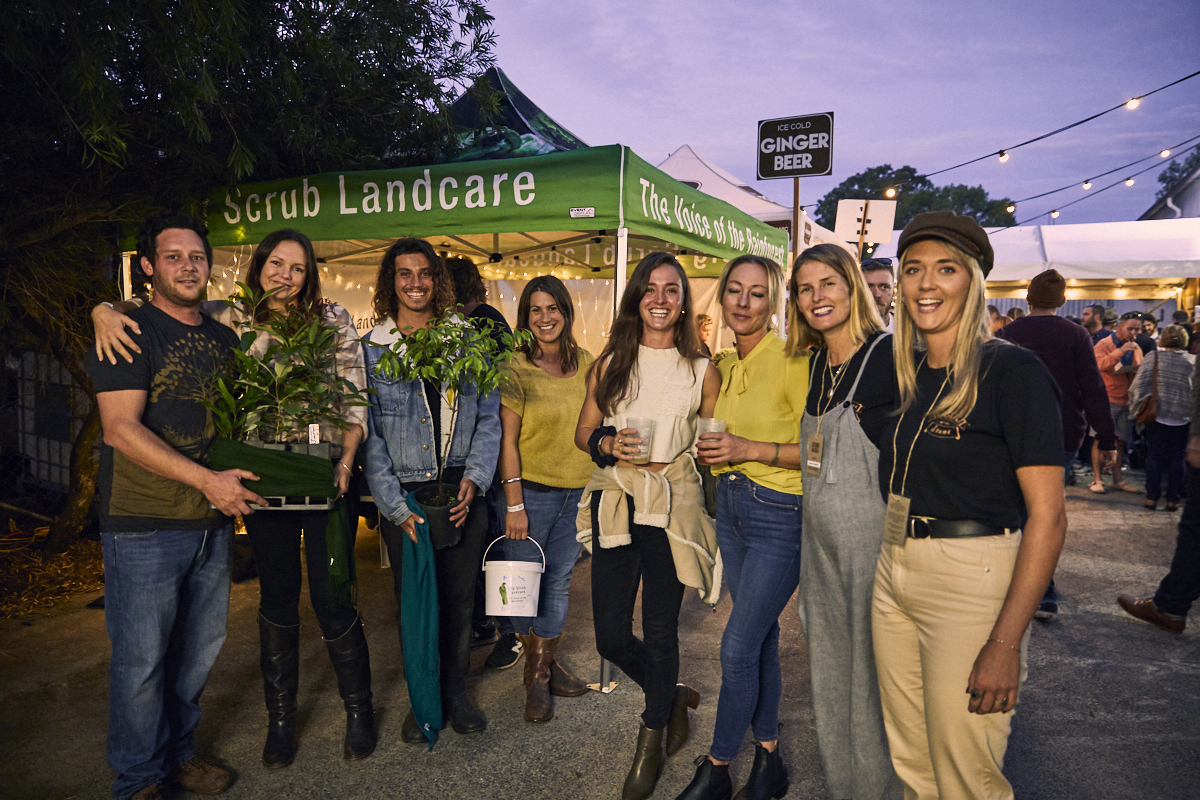 As always, sustainability and community will be at the heart of Stone & Wood’s focus for the future. “A big part of what we do comes back to the vision. We not only want to be the village brewer, but we also want to be an independent, multi-generational brewer,” James says. “We want this business and its positive impact to extend far beyond any of our own individual selves. When you take a really long-term view of what you’re doing, it changes the way you make decisions and run your business.”