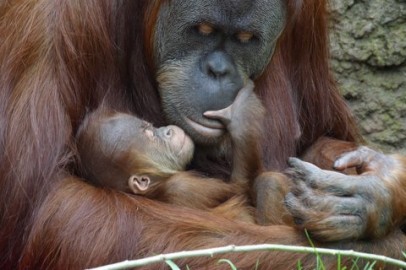 My very first article for Peppermint was a Penny for Your Thoughts on food. I love food, adore it. I spoke about navigating my way through the various moral, ethical and religious values around food. Top of my mind was palm oil.

Palm oil, for the most part, is farmed on land which was forest. According to Greenpeace, an area the size of about 300 soccer fields is cleared every hour to make way for oil palm plantations. In the process of clearing rainforest, animals are killed and displaced, and ecosystems destroyed. It’s estimated that an orangutan is killed every two hours. That’s heartbreaking. It is also farmed in the habitat of Sumatran Tigers, who face extinction. Palm oil plantations also take habitat from elephants, forcing them to look for food elsewhere and contributing to human/animal conflict. (Gives ‘the elephant in the room’ a whole new meaning when they’re sorting through your kitchen).

If you think it’s not relevant to you – it is. Palm oil is in about 40% of the products we buy at the supermarket. But it isn’t necessarily labelled on them. Palm can be hiding as vegetable oil, or a number of other innocuous names. It contains around the same amount of saturated fat as butter, so lumping it in with vegetable oil, which has different (often ‘healthier’ properties) isn’t really fair either.

Thankfully there are ways to produce palm oil sustainably, but there’s currently little demand for it. Palm oil industry representatives would have us believe that farming helps local villages, but in the long term that’s absolutely not true, and it’s often not true in the short term either.

In an effort to make labelling of palm oil (or CS Palm Oil, for certified sustainable palm oil) mandatory, Senator Nick Xenophon introduced a bill into parliament, the Truth in Labelling – Palm Oil bill. And heartbreakingly, that bill was rejected.

The bill is about to be presented a second time and we need to let our Federal members of parliament know we want it passed. For so many of these species time is running out. We have a right, whether our motivation is about our health or animal conservation, to choose products which aren’t contributing to the killing of animals and destruction of their homes. If you could spare a moment to write to your member and let them know you support it that would be great. In the meantime, you can ask the producers of your favourite products if they use palm oil, and if so if it is certified-sustainable palm oil?

Wishing Senator Xenophon and the bill all the luck in the world!

Further reading: The Bill, The Senate Report, Transcripts of Public Hearings: Melbourne (check out page 12 and 27 for a very brave 13 year old’s contribution) and Canberra.