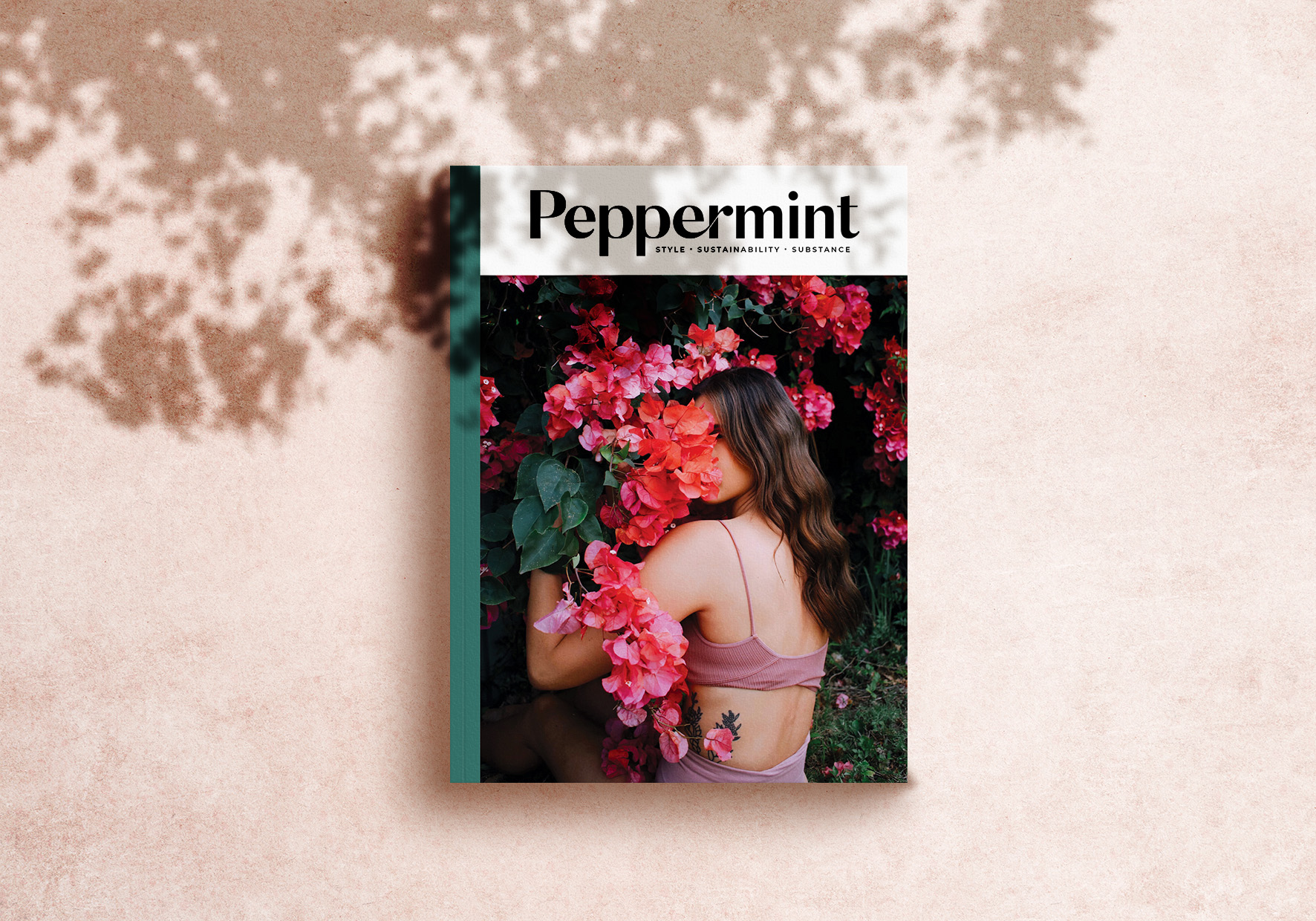 Press pause and unwind with Peppermint’s lush Autumn Issue 49. Contemplative and thoughtful, it’s the perfect way to lead into the cooler months – grab a cuppa and embrace the kind of slow, considered read you can only get in print.

Inside the issue we chat to the 10 winners of The Kindness Cup – a celebration of everyday heroes – to see how small acts of kindness can change the world; cover photographer Grace Bowen illustrates our profound relationship with Mother Nature in a beautiful photo series; we meet the inspiring new guard of climate activists putting intersectionality at the fore; explore the shifting cultural code of non-binary fashion and what it means for gendered dressing; Wiradjuri, Ngemba and Paakantji writer Gemma Pol talks with Bruce Pascoe about healing country using First Nations knowledge; we dive into sustainable architecture with Five Mile Radius; and Emily Ehlers hacks her diet for sustainability with tips for how you can lower your own carbon footprint with simple changes.

Plus you’ll also find a fun DIY thrifted business shirt project with op-shopping queen Hannah Klose from Never Ever Pay Retail; we talk to self-love advocate Vee Williams of Fatties and Feelings about self-acceptance and finding their voice; we go behind-the-scenes of Melbourne’s transparent fashion label Elk; slow ceramicist Grace Brown of Oh Hey Grace chats inspiration and process; writer K.Z. Barton shares the reality of living – and thriving – with multiple chronic illnesses; Harriet Spark of Grumpy Turtle Creative goes out to bat for the super-cute but endangered spectacled flying foxes; we explore Australia’s beautiful country and the world’s oldest living culture through First Nations tours; celebrate vegetables with a recipe from much-loved cook Alice Zaslavsky and so much more!

Make the issue yours by following the links below or head to your local stockist! 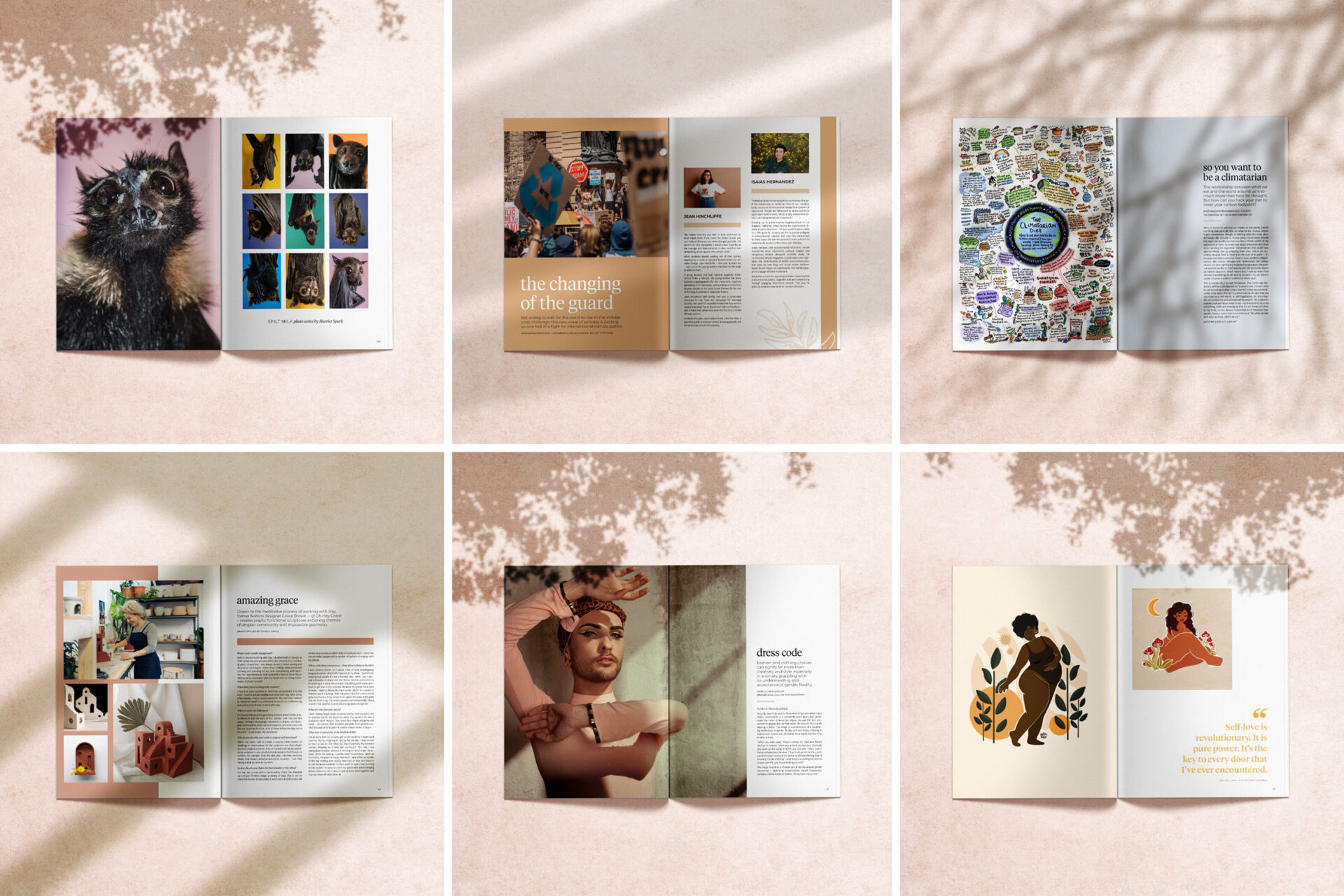 Take a peek inside this issue!

“Representation within the media of, and for, fat bodies is so crucially important, and it’s often overlooked. We’re frequently presented as the headless bodies used in advertisements and morbid statistics. Not only is this limited representation harmful to individual’s self-esteem, it directly contributes to the perpetuation of fat phobia within the media and society at large. People flood to me with an almost ecstatic energy upon seeing bodies like their own featured within my work. Fat people, particularly those who are not white, are seldom depicted in a way that is soft or celestial and, at the very least, desirable.

The truth is that fat people are all of those things and so much more. We are beautiful, joyous, multidimensional characters and we deserve to feel and be seen as such.”

‘A LAUGH A DAY’ We chuckle our way through a laughter yoga class to explore the potential health benefits. Words by Lauren Baxter.

“The benefits of a good IRL laugh far surpass the fleeting nature of memes, Tik Toks and tweets. They are physiological, psychological and psychosocial. Studies indicate a strong correlation between laughter and the release of endorphins, dopamine and serotonin – the body’s “feel-good” chemicals. By minimising the brain’s response to external threats, laughing has also been linked with decreased cortisol levels which promotes improved metabolic, immune and cardiovascular health. In reality though, we don’t really need science to prove the power of laughter. It’s visceral. We feel it in our bones. Just watch a video of a baby laughing and tell me you don’t feel something. Hell, even I do and I’m dead inside.

What’s more is the sense of connection and bonding that laughter fosters in social situations. It can strengthen relationships and increase feelings of security and safety. Studies have even found laughing can help build resilience and increase creative thinking. But don’t just take it from me. One study, published in American Psychologist by Dr Barbara Fredrickson, goes so far as to suggest “that the capacity to experience positive emotions may be a fundamental human strength central to the study of human flourishing”.”

‘ON COUNTRY’ Wiradjuri, Ngemba and Paakantji woman Gemma Pol explains how, by returning to First Nations knowledge systems, we can heal Country.

‘DRESS CODE’ Fashion and clothing choices can signify far more than creativity and style, especially in a society grappling with its understanding and acceptance of gender fluidity. Words by Lauren Baxter.

“Prior to the early 18th century, though, the idea of decoration and dressing ‘beautifully’ wasn’t gendered. But with the French Revolution came an idea that what you put on your body symbolised excess and frivolity. “One point the western version of history will always clearly define was a point where men’s dress became really sombre and really simple. And that point is something that theorist John Flügel termed, ‘The Great Masculine Renunciation,’” Dr Anna Hickey, sessional academic and co-founder of Brisbane-based design group The Stitchery Collective explains. (Anna’s PhD examined genderqueer fashion models and their representations of gender in visual culture.) “For men, it became this idea of the fraternity and you’d dress in a suit to symbolise your equality as a man. After that it was not just out of fashion, it was like, only a political traitor would do that [wear a dress].”

This is just one example of how changing gender norms have informed our clothing choices. Historically, high heels were invented and worn by men. Social convention of 1884 saw boys wearing dresses until the age of six or seven. In 1918, trade publication Earnshaw’s Infants’ Department stated that the “generally accepted rule is pink for the boys, and blue for the girls”.”

As we let go of conditioning and societal constructs we allow ourselves to be truly free, just as we are, and to accept others in this same way. Evie Willsteed – Genkstasy

‘THE CHANGING OF THE GUARD’ Not willing to wait for the world to rise to the climate crisis challenge, this new wave of activists is putting up one hell of a fight for intersectional climate justice.

“I want to be remembered as the generation who proudly stood up and said enough and then got to work on dismantling the social systems that kept the land and people oppressed. All I want to see is my land healthy and the people free. If I can contribute to that cause, even a little bit, then I’ll be content.”  – Jamie Graham-Blair, Seed Mob

“There’s so much to love about veg! The colours, the flavours, the textures… heck, the glory of seeing something sprout from a tiny seed and grow into a beautiful bounty to share. Vegetables are the food that bring us closest to nature and nourish us from the outside in (hello, green space!) and the inside out (hello, produce that zings!). For a long time, the messaging around vegetables has been stuck in “must eat” when really, they can, and should, be a “lust eat”!”