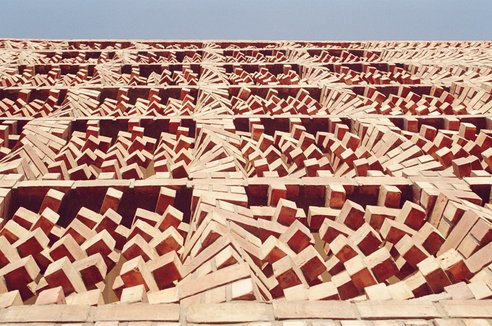 No, this is not a strange experiment in ultimate Jenga, it’s a fully functional wall that stretches 10m created from a kaleidoscope of bricks. The amazing creation belongs to the South Asian Human Rights Documentation Centre in New Delhi, an organisation dedicated to advancing human rights in partnership with United Nations. Battling with a busy street frontage and sunward-facing orientation, architects from Anagram – with the help of local construction workers – were inspired by traditional South Asian soleils to create this intricate brickwork on the building’s facade. Not only does this masonry look spectacular, the specially laid brick Jaali screen acts as a double skin to thermally insulate the building against the harsh sun and reduce heat transmission to workspace areas. Tiny gaps in the outer layer let a little natural light, afternoon breeze and even the sounds of the busy marketplace below inside. A natural way to cool a room’s interior and, naturally, a very cool spectacle on the streets of New Delhi!